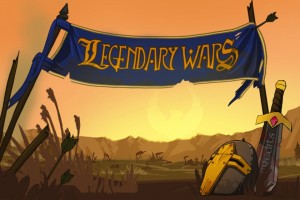 If there’s one thing you can say about Liv Games, it’s that they care about their fans. Since its release, Legendary Wars has had numerous updates, each one better than the last. This new update introduces additional character upgrades and more opportunities to win Moonstones, the in-game currency. Below is my review for the game, including the new updates.

Gameplay 4.5/5
At the start of each battle, you summon your miners, or Mineys. These guys are the backbone of your whole army. Without them, you can’t summon any troops to fight! You also need to continuously collect the gems from the Mineys in order to use them. Once you have collected enough, you can start summoning troops. Those familiar with Plants vs Zombies will notice a similarity between the sunflowers/sun and the Mineys/gems. It works pretty much the same way.
The troops consist of various kinds of characters each with unique abilities. Each character can also be upgraded using a mix of Gems and Moonstones, awarded at the end of battles.
In addition to the characters you get automatically through the story mode, you can also purchase the optional Healer class for 3 Moonstones (down from the original 5), which will help out considerably. Besides being able to recover your troops’ hit points, her upgrades include stunning, charming, and now even summoning a helpful fairy at tier 4.

What makes Legendary Wars unique from similar games in the genre is the ability to control each troop once it’s on the battlefield. There’s plenty of room for micromanaging, if that’s your sort of thing. If it’s not, you can turn on Casual mode, which allows you to control all the troops at once, commanding them to attack, retreat or defend (stand still).
Even if you choose casual mode, there is still a lot of strategy involved. The levels are divided between offensive (take down the enemy castle) and defensive (protect your castle), each requiring different strategies. The game is also broken up with some side-scrolling levels and defend-the-hero levels to keep it interesting.

In addition to bonus content and character upgrades, the menus also got a bit of an overhaul in the latest update. The upgrade screens now use swipe-scrolling controls instead of the original arrows. This feels much more natural, and takes advantage of the touch capabilities that so many games seem to ignore. It may seem like a small change, but it makes the game much more user-friendly.

If anything negative can be said about Legendary Wars, it’s that much of the story campaign can be on the easy side, even on Monster difficulty, the hardest. That’s not to say it can’t be challenging at times; it’s just not consistent. However, the bonus content, such as Endless Mode, offers a significant challenge for the hardcore fans. The other slight nuisance is the slow loading screens between games. But the developers are continuously working to improve the loading times, and it’s a small price to pay for an otherwise fluid game.

Story 3.5/5
The story is very cliche and cheesy, but it’s hard to hate on a game that gives each character its own personality and unique dialog. While I doubt anyone would want to read through all the text on all four play-throughs, it is worth reading at least once. The spunky Uni named Spike is my favorite hero, and I could’t get enough of the gargoyles’ obsession with their “rock-hard abs” ;).

Graphics 5/5
What stood out to me the most when I first heard of Legendary Wars were the gorgeous, retina-optimized, 2D graphics. Although the fantasy theme is an all-too familiar one, this game adds its own personality to the genre. In Legendary Wars, you get to control an army of mythological creatures, including the usual elves, dwarves and wizards and the not-so-common unicorns, golems and phoenixes. Each character has several possible upgrades, with each one looking better than the last. My personal favorites are the Phoenix and unicorn. It’s not often you get to control a flame-throwing mythical bird in a defense game. The enemies are equally as fun to watch (and at one point even control!). While LW does use some undead monsters, they’re more unique and varied than the overdone zombie theme. You’ll find not only skeletons and zombies, but animorphing vampires, werewolves, trolls, web-shooting spiders, dragons, and even stone gargoyles with a personality similar to the Planet Fitness musclehead who “picks things up and puts them down.” All the characters are charming and a pleasure to look at. The update adds tier 5 Knighty, Elfy and Dwarfy, as well as a tier 4 Healer. They all look impressive in their sky-inspired garb. 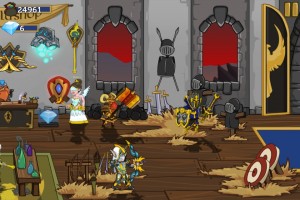 Audio 4/5
The music is sometimes fast-paced and urgent, while other times a sorrowful foreboding of doom and gloom. They can get a bit repetitive, especially after playing through all four difficulty levels. But there’s enough variety here to keep it from getting too annoying or distracting.
The sound effects for all the special attacks sound great, especially from the monsters. My favorite is the zombie taking a big bite out of you.

Replay Value 4.5/5
Legendary Wars has four difficulty levels to play through. There are also several bonus games, including the Dairy Farm, where you go up against knife-wielding mad cows and the newly-added Bully boss. The endless games will keep you playing long after you’ve beaten the Monster difficulty. The game will continue to dangle those precious Moonstones in front of you until you get all the upgrades. There is a lot of content here that will entertain you for a long time. At least until their next game, Monster Wars, is released.

Conclusion 4.5/5
With gorgeous graphics and hours upon hours of gameplay, Legendary Wars is a must-have for fans of the Tower Defense genre, or those looking to get their feet wet. The RPG elements, such as character upgrades, will keep you playing long after you play through the story mode. But if you’re still not sure, it’s currently free in the app store, so you have nothing to lose!

Check out these screen caps of my army taking on the new Bully boss! 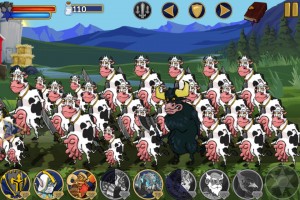 Here my Tier 4 Healer summons her pet fairy. Don’t worry, the healer still heals and charms at this level. The fairy is an added bonus 🙂 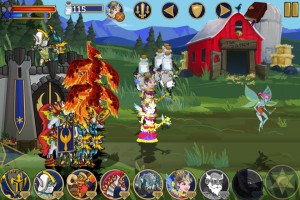 The brave (or foolish?) fairy going off on her own to provoke the mad cow army. But she didn’t die in vain! 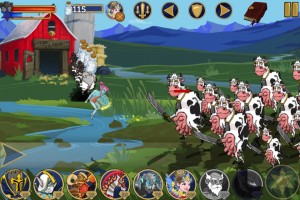 There were casualties, but the big Bully went down. Victory! 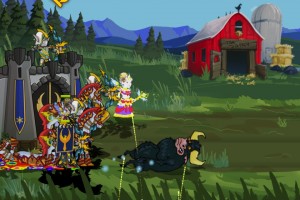