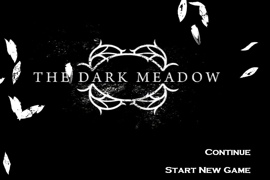 Dark Meadow is a new atmospheric first-person iOS game that borrows some game mechanics from the highly successful Infinity Blade, while offering plenty to make it stand out on its own. Here’s a breakdown of what you can expect from the latest mobile game to utilize the Unreal Engine 3.

Gameplay 3.5/5
In Dark Meadow, you wake up in an old hospital, deserted by all but some strange creatures and an old man who communicates with you via the loudspeakers. You walk through the seemingly endless halls, picking up items and watching out for creatures that lurk in the dark. 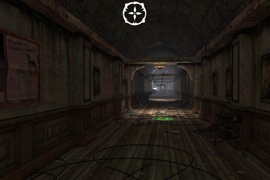 Most of the gameplay in Dark Meadow consists of combat with these creatures. When they first appear, you shoot them with your crossbow. They, in return, spit projectiles at you. The crossbow takes a little practice to master, but once you get the hang of it, you can damage the monsters pretty badly before they even get close to you. 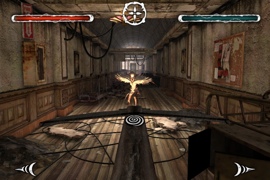 Here’s where the similarities with Infinity Blade become too obvious to ignore. Melee combat is a watered-down version of Infinity Blade’s, with block and dodge but no parries or stabs. You even get a finishing bonus, or “overkill” bonus here. Like Infinity Blade, you are hunting an enemy who is too powerful for you, the White Witch, so you die and have to train to become stronger.

Leveling up and gaining experience is also much simpler here than in Infinity Blade. You always gain experience from killing monsters, independently of which equipment you’re using. You also have less variety in the equipment. Only weapons (bows and swords) and amulets (bonus stats) can be upgraded, and they’re not quite as visually breathtaking as Infinity Blade’s weapons. There are no armor, helms, shields or magic rings. Infinity Blade has a more complex and hardcore upgrade system that forces you to buy everything in order to gain experience. Some may like the simplified system of Dark Meadow because it means you can save up your gold for better gear that you’ve been eyeing, instead of buying every piece. This helps cut down somewhat on the grinding and makes it a more casual game than Infinity Blade. 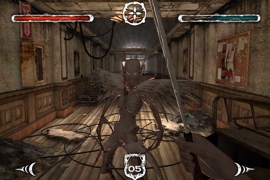 However, despite the similarities, Dark Meadow is far from being simply Infinity Blade Lite. The atmosphere is gloomy and foreboding. It also allows for more exploring than Infinity Blade. A blinking white light in the distance shows you which direction you need to be heading in. Pulsating green circles appear to show you where you can walk and which doors you can open. But you can also stand still and look all around you in every direction to find items. Therefore you have more freedom than you do in in the ultra-linear Infinity Blade. You don’t find enemies in the same spots each time, and even the White Witch moves around.

Besides the combat, there isn’t much else to do. Exploring the hospital is a big part of the game, but you only find coins, gems, first aid kits, newspaper clippings (parts of the story) and the occasional weapon upgrade. Those looking for more of an adventure game might be disappointed. I, for one, would have loved to be looking for clues and solving puzzles while exploring the maze-like hospital. Room escape-like puzzles would have easily made this one of my favorite games of all time. But even without them, it is quite an enjoyable game with plenty of exploring to do. You just have to know what to expect before you purchase.

In the recent update, the developers got rid of the post-battle screens which interrupted your immersion in the game. So anyone who refused to play because of this should give it another chance. It is a much smoother experience now, and it’s much easier to lose yourself in this mysterious world.

One aspect of the game that may bother players, especially casual ones, is the rarity of check points. If you were planning to play for ten minutes at a time, that’s not likely to happen. While the game does auto-save your progress as far as items and experience, you need a checkpoint to save your location. If you don’t make it to another checkpoint before you take a break, then you’ll wake up back in the first room. However, the game does have backgrounding capabilities, so as long as you’re not gone *too* long, you can pause and resume where you left off. But even if you do wind up back at the beginning, you’ll be treated with some new dialogue from the old man. And the best part about it is it doesn’t seem to repeat!

What also changed in the latest update, is that they responded to complaints of too many monsters slowing down the exploratory part of the game. Battles are now less frequent, so if you have to start again from the beginning it won’t take as long to get back to where you were. This allows for more casual players to still enjoy it.

Story 5/5
The story unravels mainly through newspaper clippings you find on your explorations through the hospital. They are saved to your menu screen so you can go back and read them anytime you’d like. The old man you meet at the very beginning is the primary character in this story. He’s wonderfully entertaining, and always has something interesting or humorous to tell you. You won’t be sure who he is or what his motives are, but little by little you discover more about him. This old man and the bits of story you find are what keep you grinding through all the monster battles and pushing through the maze of familiar doors. The story is where this game really shines, and what sets it apart from Infinity Blade. There’s a lot of reading, but it’s worth playing if you like a good story.

Graphics 4.5/5
Dark Meadow was made with the same Unreal Engine used to make the groundbreaking and bestselling Infinity Blade. It definitely shows off the power of this engine. While perhaps not as flawless as those of Infinity Blade, the graphics are gorgeous and realistic.

The game is more of a dark fantasy than horror. The monsters are creepy and imaginative, but they don’t jump out at you, and blood doesn’t spurt everywhere. This game won’t have you hiding under your covers at night. But it is a beautifully-rendered atmosphere that is worth exploring.

Audio 5/5
The voice acting alone makes it worth playing this game. If you watch a clip from this game, hearing the old man speak may be enough to convince you to buy it. There’s very little repetition in what he says, making him feel like a real flesh-and-blood character. Without him, this game would easily get boring fast.

The music is eerie and works seamlessly to immerse you in the experience. It pulls you into this world without being distracting.
The sound effects help in creating the perfect mood. The hypnotic clicking sound of cicadas surrounds you at times, but not often enough to become irritating. The monsters screech and scream as you battle them, making your heart beat faster as you struggle to kill them before they kill you.

Replay Value 4/5
By nature of the game, you’ll be replaying the same battles and visiting many of the same rooms several times just by playing through the game once. Since the game has so few checkpoints, you’ll spend a lot of time retracing your steps unless you play the whole game in just a few sittings. This means, by the time you reach the end you likely won’t want to start over. But this is a fairly long game, with plenty of grinding (to level 50), items to find, and story to unravel. If you do decide to play again, the latest update added “New Game +” for extra difficulty. So if you’re playing for the combat and not just for the story, you can get a lot of replay value from this game.

Conclusion 4/5
If you played Infinity Blade and are looking for something similar to play next, Dark Meadow is just the thing. It will appease your thirst for sword-swiping and exploration of a lush 3D environment, while adding a complex story and excellent voice acting that Infinity Blade lacks.
However, if you’ve had enough of the on-rails gameplay and finger-swiping battles of Infinity Blade, you might get bored of Dark Meadow fairly quickly. If you’re simply looking for an immersive game with gorgeous graphics and an enthralling storyline, Dark Meadow may be just what you need.

While similar to Infinity Blade in some ways, Dark Meadow is original enough and enjoyable in its own right to justify playing. Combat similarities aside, this is a dark and immersive experience that just about any iOS gamer will want to try. Just keep in mind it will take a lot of grinding and patience to reach the end.

If you liked this game, check out my review for Cause of Death: Dead Man Walking, Ellie – Help me out…please, and Atmosfear.

Escape Game: “A Cold and Deserted House”: Finally, IDAC gets it right!

Sky: Children of the Light – Vault of Knowledge Spirit and Wing Locations Guide