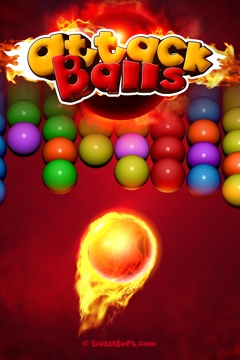 There are a lot of bubble shooting games flooding the apple app store. It’s hard to tell what’s worth buying. Attack Balls makes some pretty hefty claims in their description, and it’s easy to get pulled in by the flaming ball on the cover, as well as the 3D balls in the screen shots. But does the game live up to the hype?

Gameplay: 1/5
Controls are the most important part of any game, and it can make it or break it. With Attack Balls, it’s broken. The time I spent with this game was incredibly frustrating, especially silkier I’ve played plenty of other match-three and bubble shooting games that got less hype but played so smoothly. The main problem here is that you have to swipe your finger across the screen to move the ball. This leads to inaccuracies and frustration. Most bubble shooters allow you to simply tap where you want the ball to go, and that works perfectly. Why they would choose to use swipe controls for Attack Balls is beyond me. Besides that, the game isn’t really all that challenging or interesting. You don’t have to match three balls, as shooting at just one of the same color will make it pop. If you mis-swipe (which is very common) the ball you control simply changes colors, instead of adding to the wall of balls coming at you. To make matters worse. There’s no multitasking or backgrounding capabilities, not even a pause button. So if you get a call or have to take a real mid-game, you have to start over. In short, I can’t really see how they could have made the gameplay any worse. 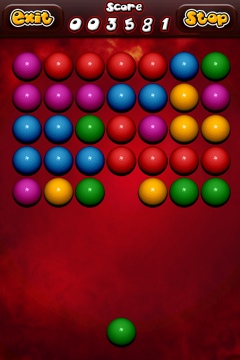 Graphics: 3/5
They win some props for having 3D graphics, but there’s so little variation, that it ends there. The flaming ball on the cover could be considered false advertising, as I didn’t encounter anything like it with the little time I could bear playing. If there were some flaming balls or other variations, it might make a difference. But as is, there are just a bunch of colored balls.

Audio: 3/5
The music is ok, but nothing to call home about. It might get annoying and repetitive after enough play time (if anyone manages to get that far).
The sound effects are basic and also nothing too great. But if the rest of the game were playable, I don’t see the audio being much of a problem.

Conclusion: 1/5
Why this game was ever “featured by Apple” is beyond me. I’ve never been so eager to delete a game and so unwilling to give it more time. Do yourself a favor and stay away from this one. If you want to try it just to see what’s so bad about it, try the free version and save your money.

If you’re looking for a quality bubble shooting game, check out Bubble Bust! or see my list of Bubble Shooters.