Escape Game: “The Inn of Ordeals” 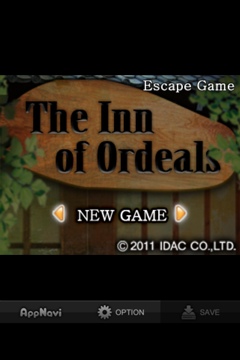 1. Move backwards. Open the closet to the right. Move two of the “futons” (they look like towels to me) to find a thermometer.

2. Turn around and head towards the window. Tap the band of the curtains a few times. A green cord falls to the ground (it might not tell you). Pick it up.

3. Look to the left for a sofa chair. Lift the cushion and take the remote.

4. Turn around to the fridge. Open it to take a bottle of soda.

4. Back away from the window and turn towards the kitchen. Zoom in on the little alcove with a plant and a pot. Take the ink bottle from the pot.

5. Go back to the fridge. There’s a towel hanging near it. Wipe the ink on it and the letters “Mt” appear.

6. Go back to the alcove and tap on the picture of the mountains. Tap on it again and it says some numbers appeared. Zoom in on them. It says “136”.

8. Turn the memo over and there’s a picture of a tear drop.

9. Go back to the kitchen and zoom in on the electric coffee pot. Turn it around and plug in the cord. Then plug it into the wall.

10. Open the coffee pot and put the memo in the water. Some letters appear, and it looks like it says “90 degrees Celcius.”

11. Now the water starts boiling. Walk around the room and come back. It should be hot now. Pour some water into the mug, then place the thermometer in the mug.

12. Zoom in on the thermometer. There’s a flower with a line under it.

13. Now you can zoom in on the flowers in the alcove. There’s a key in the flower pot. Take it.

14. Turn to the green safe to the right of the kitchen. Use the key to unlock it. Take the DVD from inside.

16. Turn on the TV with the remote and some numbers appear:

18. Take the scissors from inside.

19. Turn to the table and chairs in the center of the room. Tap on the right chair to find out there’s something in the cushion. Use the scissors to cut it open and get a pen.

20. Go to the window and zoom in on the window sill. Use the pen on it and you will trace out a design. 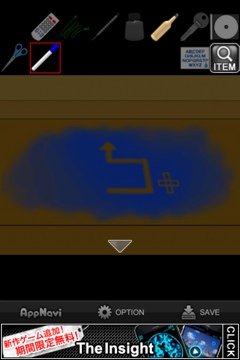 21. Go to the door near the main door. There’s a key pad like this: 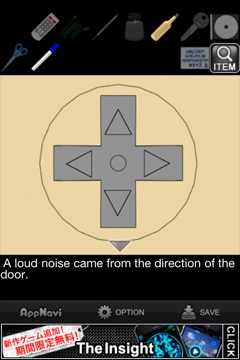 Using the diagram from the windowsill, you get “Right, Up, Left, Up.” Use this on the keypad to unlock it.

23. Open the toilet seat. It says “Put my name in alphabetical order.” Use the pen on it and the words appear: “and unite all repeating letters into one”.

24. Using the instructions above, you get “Eilot”.

25. Zoom in on the keypad under the sink and type in “Eilot”.

26. Open the drawer and take the soap.

27. Go back to the main room. Face the window. There’s a divider hiding the sofa. Zoom in on the bottom of the divider. It moves a bit. Rub the soap on it. Examine it again. It’s slippery now.

28. Zoom out once and tap on the divider. It tells you that there was a loud slamming sound somewhere. If you look carefully, an item dropped nearby.

29. Turn to the left a bit and zoom in on the object. It’s a screwdriver. Take it.

30. Go back to the bathroom. Turn to the bathtub. Zoom in on the metal panel. Use the screwdriver to unscrew the two screws then open the door.

32. Look inside the tub. It’s dirty. The shower is now on, but the tub is still dirty.

33. Walk around the place a bit while the water runs.

34. When you come back, some of the dirt will be gone. Use the soap on the rest and a diagram appears. It’s a clue for the table that goes “plonk”. 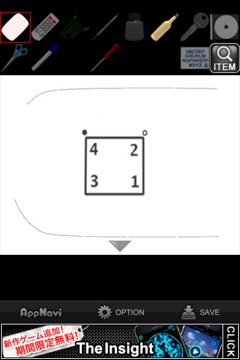 35. Go back to the main room and face the window again. Zoom in on the small brown table.

38. Go back to the sofa. Zoom in on the puzzle on the wall. Using the clue, push the stick in, then tap the right arrow, left arrow, then right arrow again. Last, pull the stick and our comes a bottle opener!

40. Go back to the fridge. There’s a cup on top of it. Pour the drink into the cup. Tap on the cup and you get the blue marble.

41. If you examine the marble, it says there are letters written on it. Hold it up to the window and the words “IN SOAP” appear.

42. Go back to the bathroom. Turn on the sink faucet. Put the soap under the running water and a key appears!

43. Use the key on the front door and you’re out! Congratulations! 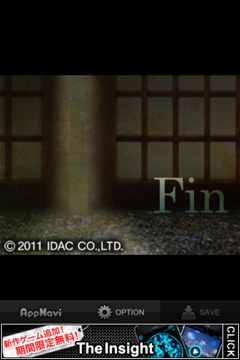 If you liked this game, see my list of other room escape games, including Closed Room, Atmosfear, and Haunted Halloween Escape.