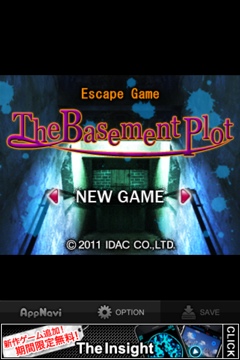 1. In a strange twist from the usual room escape games, you have to find something to use to *lock* the door. Look behind the stairwell and take a board off the top box.

2. Place the board on the door to keep it closed.

3. Turn to the shelves with the preserved goods. There’s a package of pasta lying down. Open it and take the wire from inside.

4. Move the chair from the table and it lands under the fan (the green thing up above).

5. Zoom in on the fan and tap any of the buttons to see that it’s lit.

6. Go back to the stairwell. This is tricky, but you need to get behind the stairwell. Look through the stairs and you’ll see the fan, but only the green and blue buttons. Zoom in on them as much as possible.

8. Take the pencil from the fan.

9. Turn to the screen with the table and books. There’s a brick that stands out. Use the wire on the bottom edge and a memo pops out.

10. Unfold the memo to see a picture of some scenery. If you look at the piles of sticks, they make up the numbers 3325.

11. Go back to the stairwell. On the top of the box is a keypad. Type in 3325 and it unlocks. Open the box and take the spray bottle.

12. Go to the table. Look underneath and you can see something faint on the bottom of the legs. Zoom in on each of the three legs with writing on them, to find the letters e, l, and i.

13. Look at the top of the table. Zoom in on each corner that has a little circle on it. You’ll notice they correspond to the three legs with letters on them. The first one is l, because the two dots are close together. Next is i, with the dots slightly further apart, and e has dots the farthest apart.

14. Go to the wine cellar and zoom in on the keypad. Type in “lie”. Take out the open wine bottle.

15. Wrap the wire around the pencil and make a spring.

16. Look under the bookcase for some pliers. Take them.

17. Attach the pliers to the spring you made. You now have a makeshift corkscrew.

18. Use the corkscrew on the very tip of the bottle to remove the cork. Something is sticking out. Take it. It’s a cloth that’s been stained red by the wine.

20. Separate the coiled wire from the pliers. Then use the pliers on the wire to bend it into another shape. Grab the wire again with the pliers.

21. Go back to the discolored brick on the wall (where you found the memo). If you tap on it, you discover something is rattling. Use the pliers/wire on it and a little door opens. Take the cell phone from inside.

22. If you turn over the cell phone, you see that it has no batteries. Zoom in on the red dresser (with the flowers). Tap on the left corner to look behind it. Move the dresser away from the wall and you’ll see something stuck to the back. Take it because it’s the battery!

23. Put the battery in the cell phone. Turn it back over and flip the lid open. Zoom in on the screen. Use the red cloth on it and you start to dial the numbers you found on the cloth. No one picks up, so you hang up. But there’s a message!

25. Go back to the red dresser. Zoom in on the top drawer. There’s a dial. Tap on the right side three times to make the dial turn clockwise. Then tap the left side twice to make it turn counterclockwise. Press ENTER and the drawer unlocks.

26. Take out the note. It says “Pichi” and a diagram of a triangle. Remember the wine bottle and the letters “Pi” written on it? Hmm…

27. Take the berry plant off the top of the red dresser. Separate the berries from the watering can.

28. Examine the watering can. Look on the bottom to see the letters “CHI”.

29. Go to the bookshelf. There’s only one book you can read. It’s about making wine with berries. Read through it. The berries are used to make red wine.

30. Zoom in on the watering can. Use the berries on it to fill it with berries. You’ll notice you still have a branch left over from the berries. Use it to squash the berries and turn them to liquid. Add some wine to the mixture.

31. Tuen around to the wall with the fan. Look at the ground and find the triangle (like on the Pichi paper). Pour the red liquid from the can onto the triangle. It looks like blood! Tap the puddle to see that it’s spreading.

32. Walk away from the puddle and walk around the room for a bit and tap on a few things. When you come back, the letters “NEW” appear in the puddle.

33. Go back to the red dresser. Zoom in on the bottom drawer. NEW stands for North, East, West. So tap Up, Right, Left, then enter. The drawer is unlocked. Open it and take the knife.

35. The stairwell has 5 stairs. Head towards the stairs. Locate the third stair and zoom in on it. There’s a memo wedged in, so take it. 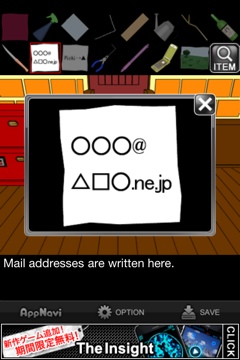 37. Open the cell phone. Use the memo on it and you send a blank message to the email address.

38. After the message is sent, close the phone. Open it again and there’s an incoming message: “The truth will be revealed.”

39. You’re now ready to leave. Go to the door and use the knife to remove the board.

40. Tap on the door. Someone’s coming! Open it up and watch the ending.

You’re done! But the ending is not quite a happy one. 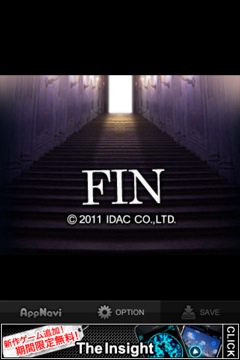