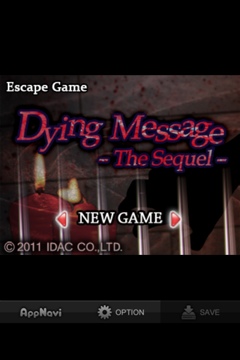 1. Turn to the red fridge. Pull the handle and it comes off. Take it.

2. Open the right cardboard box and take the clear cap.

3. Face the desk to the left of the front door (below the deer head). Look under the table. There’s something stuck there. Use the handle from the fridge to get it out. It’s an eyeglass case but it’s glued shut.

4. Zoom in on the deer head. Examine the left antler and it pops off. Inside is a rolled up piece of sandpaper. Take it.

5. Use the sandpaper to remove the glue from the eyeglass case. There’s a screwdriver inside!

6. Look for the easel. Zoom in on the top part of it and find a screw. Use the screwdriver to remove it.

7. Zoom out a bit and take the leg off the easel.

8. Zoom in on the right side of the easel. There are some words but the paint is covering them. Use the sandpaper on it and you can read the words: 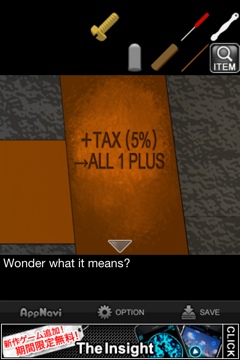 9. On the same wall as the easel, there’s a window sill that’s too high to reach. Use the easel leg on it and you get a mop.

10. Turn to the right. There’s a wire hanging near the ceiling. Use the easel leg to reach it.

11. Face the wall with the framed painting. To the right of the painting (near the beam) there’s a price tag. Examine it: 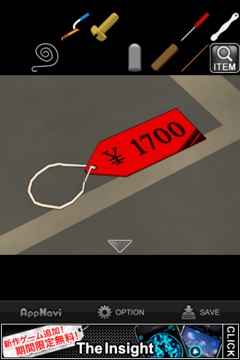 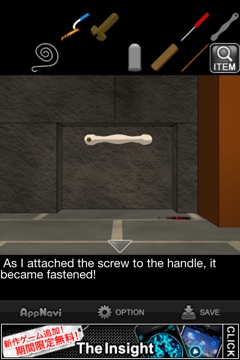 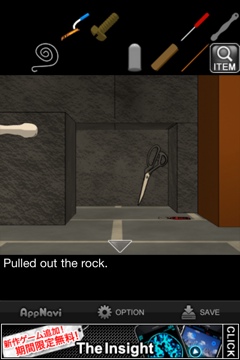 14. Open the suitcase and take out the piece of cloth. Examine the cloth and it says “The key is in the main road.”

15. Use the scissors to cut the string from the painting. Tap the painting to move it and find another one underneath. Keep doing so until the last painting says there’s a slight swelling.

16. This is the painting with the road, like the cloth said. Use the scissors on the swelling to find a key inside. Take it.

17. Go back to the desk next to the door. Use the key to unlock the drawer and take out the flour.

18. Turn to the wall with the bed. Next to the vase is a puddle of water. Use the cloth on the water to wet it. Then open the bag of flour and squeeze the water from the cloth into the flour. You end up with clay.

19. Tap on the right side of the bed to zoom in on the corner. Cut the bed with the scissors. Take the bottle from inside.

20. Go back to the fridge. Place the handle on the door and secure it with the screw. You can now open it.

21. There’s a bottle of tequila in the fridge. Use the bottle from the bed with it to fill it up.

22. Try to use the tequila with the candle on the wall. It says it’s too dangerous.

23. Use the scissors to cut some thread off the mop. Stick the clay on the string. Put the string/clay into the bottle.

24. You can now light the bottle with the candle, so you have a lantern!

25. Face the bed. Look under it and use the lantern to light up the safe. Pull the safe closer with the easel leg.

26. Look at the wall above the bed. There are some numbers. Use the lantern to light them up: 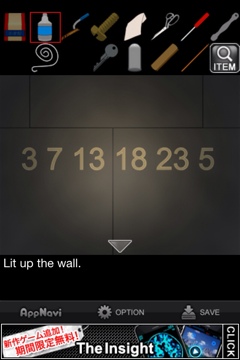 28. Take the tweezers from inside the safe.

29. Go to the vase next to the bed. Look inside it. It’s too dark to see anything. Try using the lantern on it until it tells you that you’ll be burned if you try to do it any more.

30. Use the tweezers on the wire to bend it into a shape that can hold the lantern. Put the lantern on it.

31. Try to use the lantern in the vase again. It says the light dies down. So put the clear cap over it and try again. It’s not long enough.

32. Cut the wet cloth with the scissors to make a thin cloth. Tie it to the lantern. Now you can *finally* light up the bottom of the vase (sheesh!).

33. It’s not over yet. You can’t reach the item on the bottom on the vase. Take the strip of cloth off the lantern.

34. Attach the cloth strip to the screwdriver (it’s magnetic) and hang it down into the vase. The hairpin sticks to it.

35. Use the tweezers to straighten out the hairpin.

37. Put the cloth strip back on the lantern. Hang the lantern on the deer’s antler. Now you can see.

38. Stick the hairpin in the lock. Then stick the tweezers in. Use the easel leg on it and the lock opens!

Open the door and watch the strange ending. Congratulations! You made it out! 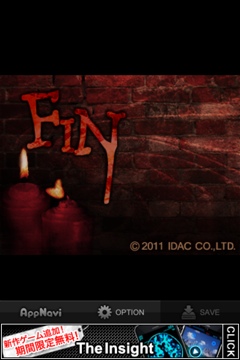 Baba is You: Flower Garden Walkthrough Guide and Solutions