Don’t Run With a Plasma Sword
By XperimentalZ Games 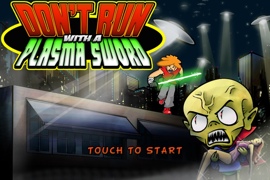 I’ll admit, platformers and endless runners are not my favorite genre of games. But it’s really hard not to take to a game with a name like Don’t Run With a Plasma Sword (DRWAPS). Here’s what you’re missing if you haven’t snagged this title yet.

Gameplay: 4.5/5
DRWAPS is an endless runner where you have to jump over obstacles, slide under others and kill robots and aliens that get in your way. You gain experience by killing things, as well as collecting stars. There are also power-ups that give you abilities like wave attack, temporary invincibility, and a magnetic personality that attracts stars and power-ups from afar. Many of these features are recognizable from other games, but DRWAPS puts them to good use and makes them work in their own unique way.

Once you’ve acquired some experience points, you’ll want to spend them on different skills. You can level up your jump so you can jump higher, make your slides last longer, or gain a mid-air dash attack. There are so many abilities to gain that you’ll forget what it was like when you could only jump and slide!

The controls of DRWAPS are pretty simple. You can play either with buttons or swipe controls. If you choose buttons, the jump and slide controls will be on the left side of the screen, with your attack button on the right. The controls are very responsive, which is incredibly important in a fast-paced game like this. The buttons are big enough that you shouldn’t have any problem hitting them without having to pay attention to where your thumbs are. As for the swipe controls, I *almost* liked them more than the buttons (I’m all for finding creative ways to use the touchscreen). The jumping works great, as you just swipe your finger up anywhere on the screen. Slide is more awkward because it requires sliding your finger down, but it’s still fairly easy to get used to. The one swipe control I simply couldn’t take to is the attack. You swipe your finger sideways, which feels really unnatural. It’s like rubbing your belly while patting your head — while running! After a few tries with it, I ended up going back to the buttons. Sometimes simplicity just works.

Story: 4/5
You play Cornelius, a comic-shop employee who wishes there were more heroes in the world. He relies on fortune cookies to determine his next move, and his latest one tells him, “Soon, accomplish great things, you will”. As luck would have it, aliens are invading earth and a hero is needed. And wouldn’t you know, Cornelius just happens to have a plasma sword lying around for just this sort of emergency! Now he gets to fulfill his destiny and kick alien butt!

Graphics: 4/5
The 2D graphics are clean and polished. They have a retro cartoonish feel to them, while taking advantage of the iPhone’s retina display to offer superb details. Each level has its own unique background, and you can see more of it when you jump. I’ve bumped my head way too many times trying to take screen caps while jumping ;). This game probably could have gotten away with more pixelated graphics since most people are playing primarily for the gameplay. But I’m glad they didn’t, as the details offer so much to the game. I especially like the graphic-novel style cut scenes, which are very appropriate and provide the humor.

The characters sprites can get repetitive after a while, but the boss battles make up for it. Still, you have to be ok with some repetition if you’re going to play an endless runner, as most of the scenery doesn’t change much. While the graphics are nice, the reason to get this game is for the gameplay.

Audio: 4.5/5
The music is a fast-paced, adrenaline-pumping alien-themed soundtrack that really captures the mood of the game. It pulls you in and keeps you on your toes without getting annoying.
The sound effects work great as well, from the swoosh sound of the plasma sword to Cornelius’ grunts as he gets hurt.

Replay Value: 5/5
DRWAPS has both a story mode and endless mode. The story mode consists of 4 levels broken up into 7 parts each, with the last one being a boss battle. The bosses are pretty challenging, and may require some upgrades before you can beat them. This will provide plenty of challenging fun on its own, but the game really shines with its endless modes. You get Easy endless automatically, but can unlock Normal, Hard and Expert. Each endless game has various objectives you can achieve in order to gain bonus experience. The endless modes should give you hours upon hours of play if you simply can’t get enough of this game!

There are also tons of upgrades to collect! If skills aren’t enough for you, you can work towards getting that purple plasma sword you always wanted, or the green hair your mom never let you have. Every part of your character is customizable, but at a cost, of course. This gives you something to work for even after you have all the skills. And the best way to keep people coming back for more is to dangle something in front of them, just out of reach. Xperimentalz did a great job finding the balance between XP and rewards so that nothing ever feels unobtainable.

Overall: 4.5/5
Sure, they snagged a clever name. But Xperimentalz is by no means relying on a gimmick to sell their game. They’ve created a solid endless runner here that should please any fans of the genre. Even if it’s not your favorite type of game, there are loads of fun to be had here. If you think jumping and sliding sounds boring, it gets more exciting when you add a plasma sword into the mix. Hell, you might even want to play just to read all the tips from the Plasma Sword User Manual. And who doesn’t want to run with a plasma sword?