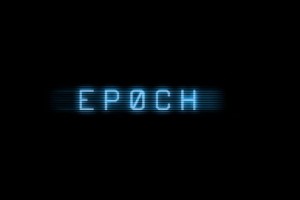 I’m completely blown away by EPOCH. I almost just want to say, “Buy it, don’t ask questions. Just buy it.” It’s that good. Here’s what you’re missing if you’re not already playing:

EPOCH is a cover shooting game. In case you’re not familiar with cover games, it means you have to hide behind objects (take cover) and defend yourself against enemy fire. The controls in EPOCH are intuitive and easy to learn, but once the action heats up, the challenge is in timing your moves just right. You have three positions you can occupy, either by standing or taking cover. Moving is all done through swipes: swipe down to take cover, swipe up to stand (and attack). Swipe left and right to move to a different position. You can even perform a super move, which makes your robot flip over from one end of the screen to the other. To do this, you swipe upwards while already standing in either the left or right position (won’t work from the middle). This is a crucial move against enemies armed with slicing lasers. The only way not to get hit is by jumping over the lasers. You need to select a target in order to shoot, but once you’re standing, your gun will automatically shoot at whatever is targeted. 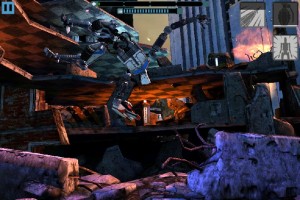 In addition to your gun, you’re armed with counters (usually grenades), missiles, and boosters. Boosters are special abilities that can either accelerate your robot, heal him, or even create a decoy! There is also an armor slot that can be upgraded for extra defense.

After each battle, you salvage equipment from the robots you just destroyed. You also earn credits to use towards other equipment, if what you looted doesn’t suffice. Each level can be replayed at any time to gain more experience and gold in case you’re having trouble progressing. This means more casual gamers can enjoy the game as well, without feeling frustrated if they can’t progress. This is useful, because the game can be challenging once you’re introduced to enemies like the Blasters and Slicers. 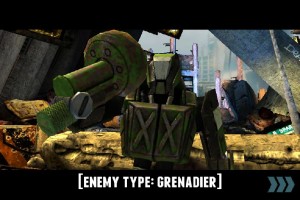 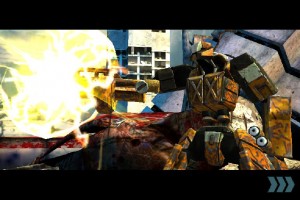 The game is about a post-apocalyptic world inhabited by warring robots. You are a robot whose mission is to save Princess Amelia in the Cryo Tower. The story unfolds through bits and pieces of data, called intercepts, that you uncover after each battle. It works like other games such as Dark Meadow, where the pieces you find are saved in your menu for easy access at any time. You can read them when you pick them up, or later when you’ve collected more of them. This system works great with the ruined city setting and lack of NPCs to interact with. The humans are dead, the robots don’t talk, so the story is provided through old text messages. The texts are written well and never feel forced. Overall, I really like how the story unravels. 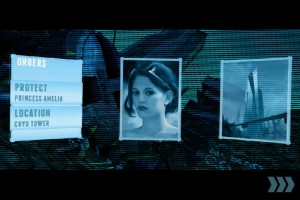 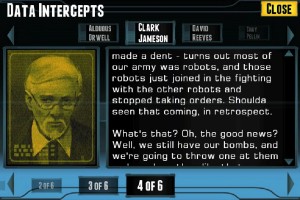 EPOCH was made with the same Unreal Engine as the award-winning Infinity Blade. The world they’ve created is one that has been ravaged by war and destruction, yet it is strangely beautiful and hard to resist. The game is on-rails, so most of the sight-seeing you do will be via cut scenes. But the camera does slow down to show you the truly gorgeous parts. The mid-battle animations are equally as breath-taking, from your own robot’s backflips to exploding grenades. The animations are also crucial for your survival. You know where a grenade is about to explode because of the orange rings emitting from it, and can roll or jump out of the way. When you destroy all the robots in an area, the camera will zoom in on the last one as it goes up in flames. Somehow, this never gets old. So much detail went into this game, down to the little line that slowly creeps up your menu screen, preserving the idea that you’re looking through the eyes of a battle-torn machine. 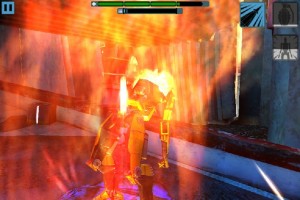 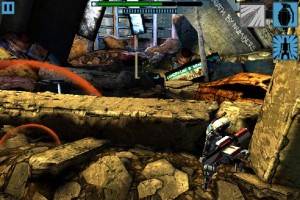 The music in EPOCH is appropriately haunting, reflecting the doom-and-gloom atmosphere of the game. It serves to pull you in without being too distracting, like any good soundtrack should do.

The sound effects are top-notch, and many of them work with the animations to warn you of an enemy attack. A grenade will beep before it goes off, while a blaster makes its own distinct noise. You need to keep both eyes and ears open to truly master this game.

There seems to be a lack of sound options, and usually that would really bother me. But I honestly can’t imagine playing EPOCH without either the sound effects or music, so it’s no issue for me. But Uppercut does plan to fix that with a future update, if that’s a concern of yours.

While the game consists of only ten areas, there are three difficulty levels to master. In addition, each battle has a number of inanimate objects you can destroy to get bonus points and more credits. There is also, of course, the challenge of replaying the levels with minimal damage taken. The game mechanics are enjoyable enough, and the battles are short enough, that you can replay a round at any time. There are a few GameCenter achievements, but unfortunately no leader boards. I also could not find any record of my own scores in order to try and top them. This removes some of the incentive to keep playing once you’ve completed the game, and I hope it is rectified in a future update. The best way to keep people coming back for more is through competition. However, there is still the incentive of finding all the intercepts to complete the story, and perhaps purchase bigger and badder weapons to lay waste to this already war-torn world. 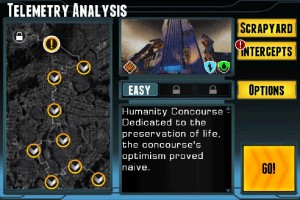 It was hard for me to even take a break from playing EPOCH to write this review. It just works in every way. It’s nearly flawless, with its only drawbacks being its length and lack of leader boards. I was so close to giving the game a score of 5/5, but held back because of those. Even so, the game is a must-have. You don’t have to be a fan of shooters to enjoy EPOCH. You just need to enjoy gorgeous graphics and fast-paced, flawless gameplay. If you’re not already playing this game, you’re missing out on a real gem. Buy it now!