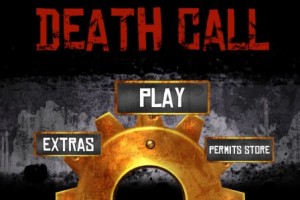 Death Call is mainly a target-shooting Western. Think of it as a shooting range where the targets hit back. And hard.

The controls are fairly simple, but take a little getting used to. The left thumb controls the crosshair of your gun while the right thumb pulls the trigger. You need to match the crosshair up with an enemy target and then pull the trigger. Headshots will cause more damage, allowing you to take down targets faster, but require more time and precision to set up. There are also bonuses, like shots that freeze your enemies, to aid you in your fight for justice. 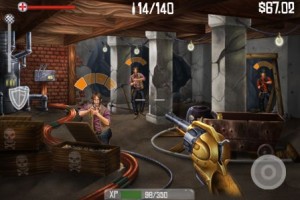 Between each shooting level, there’s a message to decode. This is done through a series of puzzles, such as connecting pieces of wires or moving an object through a maze. I’m not 100% sure how this fit into the story, but as a puzzle fan, I rather enjoyed it. It breaks up the shooting for a bit and makes you think a little. And if puzzles aren’t your thing, you can skip them (for a small price), but I recommend working through them. Some are actually quite satisfying to complete. 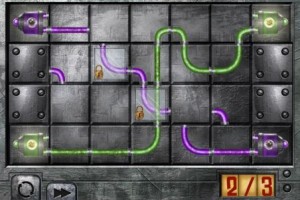 In-game cash comes in two forms — cash and Weapon Permits, or WPs. Cash is used to buy guns, ammo, upgrades and multiplayer perks. WPs allow you to spend less cash on a gun. Certain guns can also be upgraded and customized to your play style, giving you something to spend your cash on once you’ve unlocked all the guns. You can buy WPs in the store, but I never felt like I had to. Thankfully, the game allows you to play old waves over again to earn cash if you find yourself running low. I did die a few times and replayed some old levels to build up cash, but I was able to save enough for the two best guns in the game without spending a penny. I should also note that there is nothing I could find in the game that requires real money, and everything can be earned by playing (or using friends’ codes). 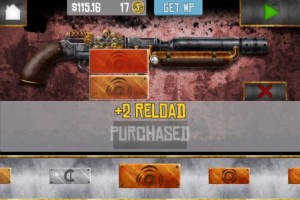 The game also encourages you to get your friends playing by offering an unlock-able gun through the use of friends’ codes. You need one code to unlock the gun itself, and then two more for the upgrades. It’s a pretty decent gun, too, especially in the beginning when you’re low on cash. But the best reason to get your friends playing is the Multiplayer mode. If the story mode wasn’t enough for you, you’ll want to find friends to compete against. 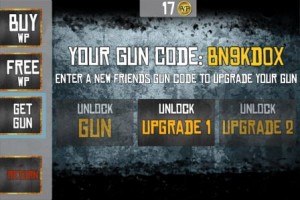 Overall, the controls work well and the loading between menus and levels is quick and smooth. If you die, you can jump right back in and replay the level, without having to waste time on long pesky loading screens. This is a great game to play when you have a few minutes to kill, as you won’t waste any time waiting.

Story: 2/5
You play as Jedediah Wolfe, a Federal Marshall hunting down a weapons smuggler named Saul Ramone. The story is pretty cliche and takes itself a bit too seriously. I would have liked to see more humor. Thankfully, the story is only explored through the cutscenes, and they’re short enough that they won’t take you away from the gameplay for too long. You can also skip them if you have no interest in the story.

Graphics: 4/5
The 2D graphics are nicely detailed and do a good job of capturing the essence of the Wild West. Each area has its own unique background so you can view the scenery while hunting down criminals. The different guns also look great. I especially appreciated the little details, like scratch marks on one of the guns to count the number of kills. 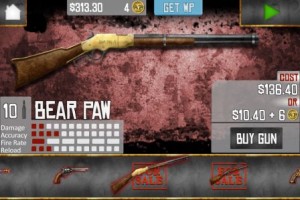 Audio: 4/5
The music captures the essence of the Wild West so well, you may feel like you’ve been transported into an old movie. It definitely got me in the right mood to shoot down enemies, without getting old or irritating.
The sound effects work well and sync with the animations to let you know what’s going on. Death Call also has voice acting, but they were a bit overdone with the deep, raspy voice of the hero and exaggerated accents of the bad guys. Still, cheesy voice acting is better than no voice acting, and I commend the developers for having it in a free game like this.

Replay Value: 3/5
The main story mode has four levels with seven shooting waves each and 3-4 puzzles each. Currently there is only a normal mode, but hard mode is scheduled for a future update. There are also GameCenter Achievements for the collectors out there. The real replay value here would come from the Multiplayer (vs) mode, but you’ll need to either find friends to join you or get lucky that someone else is searching GameCenter for an opponent at the same time. If you can find people to play against, you’ll get plenty of use out of this game.

Conclusion: 4/5
If you like fast-paced target-shooting games, give Death Call a try. It starts off simple, but gets more challenging and adrenaline-pumping as more elements are introduced. If you can forgive the cheesy story and voice acting, there’s some quality fun to be had here. The genre mashing is a bit odd, but is perfect for those who are fans of both shooting games and puzzles. And unlike many other free games, you won’t feel too pressured to spend cash. I would definitely recommend this game if you need something that’s easy to pick up and play for a few minutes at a time. It is a bit on the short side, but with Multiplayer mode and an update on the way, it’s worth a download. Death is calling — answer it! [DKB url=”https://www.appunwrapper.com/deathcall” text=”Download” title=”” type=”” style=”” color=”green” width=”” opennewwindow=”” nofollow=””] 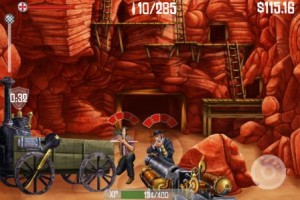 If you need help with the puzzles, see my walkthrough here.