This is a walkthrough, guide and discussion for Limbo on iPhone, iPad and iPod.

The game doesn’t really explain how the touch controls work. You need to learn on your own, and it can take some getting used to. But if you need some help, here are some tips:

1. To move, tap the screen and drag your finger left or right.

2. To jump up, drag your finger upwards.

3. To push an object, just walk into it and keep walking.

4. To grab an object and drag it to the other side (like a bear trap), get close to it, you’ll crouch down to grab it, then hold your finger down and drag in the direction you want to go. 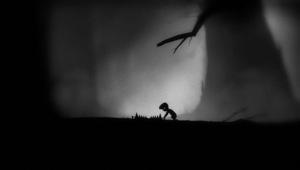 5. To swing on a rope, just swipe your finger back and forth until you gain the momentum you need, then jump off.

To defeat the giant spider early on: walk close enough to get it to start moving, then run away, so it will try to attack and hit the ground hard. You need to do this twice so the near trap in the tree will fall to the ground. Then drag the bear trap to the spider and taunt it so it’ll hit the trap. Move it around a couple of times and lure him into the trap without getting killed yourself. After he’s hurt three times, the trap will break and the spider will run off.

Follow the spider. You’ll get stuck on quicksand and he’ll grab you and spin web around you. When he leaves, shake yourself down and hop along.

When the spider chases after you later, use the log to float over to the next rock, and keep moving until you reach a longer log. Stand on it and let the spider push it down so you can go higher. Outrun it, and get the boulder up ahead to crush it (get out of the way first!).

And finally, the spider will make one last attempt at you with one broken leg. Pull the leg off and then roll the body into the gap ahead so you can cross.

The glowing leech controls the direction you walk in. You can still control how fast you move and jump as needed. But you can’t stop moving (unless an object blocks you) or change direction. If you approach a large light beam, the leech will change your direction. To remove a leech, get close to one of those dangling monsters that looks hungry, and it will eat it off your head. Until then, you need to make best of your situation.

Electricity:
In Chapter 21, the electric “HOTEL” sign. Carefully hop across to the O and the T, so the T falls a bit. Then a rope will fall down below the T. Go back around if you need to in order to reach the rope and swing across to the next platform to shut the power. Then go back across and climb up the pipe. Then hop across the full word. The “L” moves, so you need to be quick!

Elevators:
Make the elevators go up or down by standing in front of the control pad and tapping your screen. The up or down arrow will light up and the elevator will start moving.

Giant Wasp (Fly?):
Slowly sneak up on the wasp so you can get close enough to jump and grab its legs before it flies up. Then it will drop you up on the platform above.