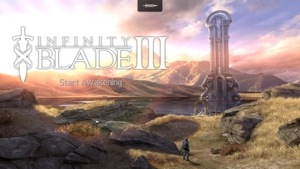 See all our Infinity Blade guides in one handy place.

Here you’ll be able to find a walkthrough guide for IB3, including hints, tips and help that seem useful. It’s a work in progress, so bear with me. Feel free to help out in the comments section.

If you’re looking for the IB3 Treasure Maps Guide, click here. And here is the potion mixing guide.

Tip:
If you loot duplicate pieces of equipment, save them until they’re level 10 before selling them. They’ll sell for more gold!

The Hideout:
New to Infinity Blade 3 is the home base called “the Hideout.” Here you’ll find the Potion Mixer, the Blacksmith (once you recruit him), the Gem Cutter (once you recruit him) and the Merchant, who visits periodically by ship (the Merchant is the only way you can sell items). You also have a 3D map that allows you to jump to available locations, including Clashmobs and Trials.

If at any point you feel outmatched and want do do more leveling, you can return to the Hideout. This gives you a new option besides defeating the boss, dying, or “restarting a rebirth.”

Even though the game, at times, gives you more than one location to choose from, it is still very linear. You must complete each area (defeat the boss) before you can move on with the story. So if you miss anything (like map treasures) you have to wait for the next play through to get it.

Trials appear on the map and are like Clashmobs. You get a certain amount of Battle Chips based on how many parries, blocks, or whatever the goal may be. 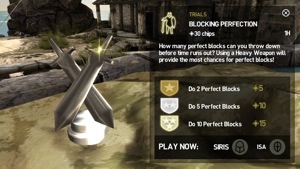 Awakenings:
In IB3, you have “Awakenings” instead of Rebirths, and they increase in number each time you get killed by a boss or defeat a boss and move on to the next area. Leaving the area before either one happens does not affect your Awakening number. This allows for much more freedom than in the previous games.

In IB3, you play both as Isa and Siris. Sometimes you can choose which one to play with, but other times the game chooses for you. Isa sneaks around and is super-fast. She’s a blast to play.

Skills are new to Infinity Blade as well. They add quite a bit of depth to the game, while also forcing players to upgrade stats they don’t necessarily want (I’m not a fan of that, but I see the benefit). Some Skills only affect Isa or Siris, but some affect both. For instance, Siris’ “Second Chance” skill allows both Isa and Siris to come back from the dead with about 1/3 to 1/4 of their HP so they can continue fighting.

Tips:
If you need to earn some XP, gold, etc, return to the Hideout and start the Act from the beginning. The enemies will be the same levels as when you left. You could also go to the Interlude for a quick battle and some loot. 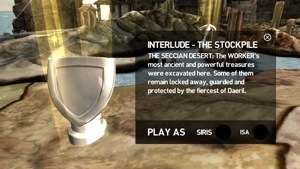 You’ll soon learn that there’s more than one Infinity Blade. Apparently there are 6, but as of now you can only get four:

The other two will likely be available in a future update.

The dragon is new to IB3 and appears at (seemingly) random points throughout the game. It flies over you, breathing fire. You’ll have a second or two in which dodge buttons appear and you need to dodge the flames. Then the dragon will land and you can fight it. Any damage you do to the dragon will still be there next time you encounter it. The first time you defeat the dragon, you’ll get a map.
If you want to make sure you’re prepared for the dragon (holding your most damaging weapon), you can usually tell if your next enemy will be the dragon by the fact that there’s no button to check what enemy it is. You just see the pulsing circle that you need to tap on.

Damage the dragon until it has only 500 hit points left (no matter what, she will have some HP left and fly away). When you next go to the Hideout, there will be a location on the map to go to Larioth and kill the dragon before it heals. The dragon will be sleeping when you get there. Fight the dragon, kill it and you get the map. Afterwards you have to go to the Vault of Tears (in a new play through if you already passed it), and kill the first 3 enemies. Enter the courtyard area where the statue is (of a guy fighting a dragon). Tap on the statue and you get a +500 Rare Fire gem. You can keep killing the dragon as many times as she appears, but you get gold rewards after the first time.

If you get the glitch where the dragon doesn’t show up anymore, try going back an awakening. That worked for me.

You can wear a Skill Dragon Gem to make the dragon stay longer (assuming it doesn’t defeat you). 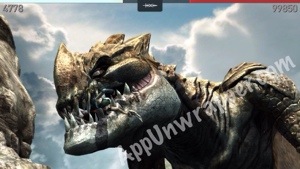 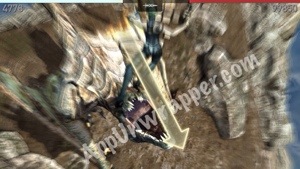 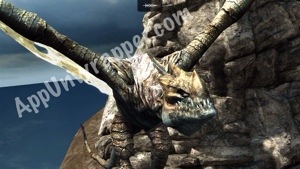 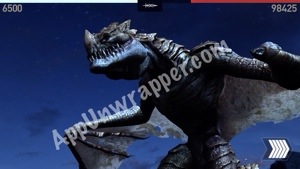 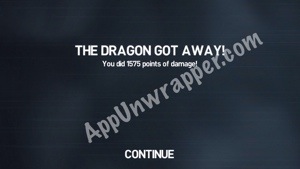 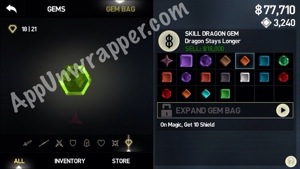 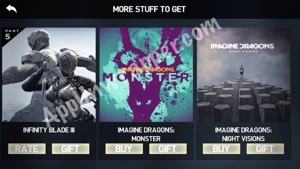 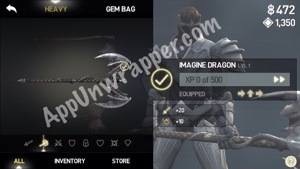 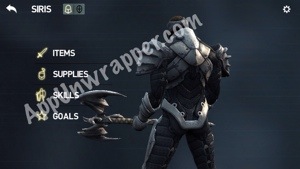 The game starts with you playing Raidriar, the God King from the other two games. He confronts the Worker of Secrets. [I highly suggest you watch all the cut scenes. John Noble (Walter from Fringe) does an excellent job as the Worker of Secrets (Galath)].
You’ll get to fight a couple of battles as Raidriar, but then you’ll continue as Siris and Isa. 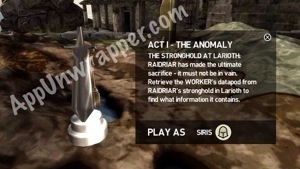 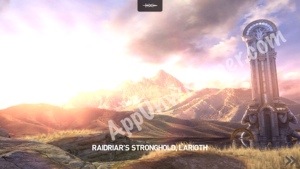 Here you play only as Siris. A thief steals from one of your treasure chests (she later becomes the Merchant). You loot the Map of Life, and the treasure is found in the same room. So pick it up or you have to wait for your next play through. At the end of this Act, you’ll fight what appears to be Raidriar wielding another Infinity Blade, the Infinity Cleaver. After you defeat him, you’ll get his weapon and head back to the Hideout. Back at the Hideout, the Merchant will visit you.

Act 2: Buried in the Past
The Seccian Desert 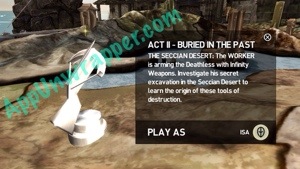 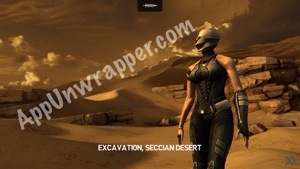 This is the first time you get to play Isa, and she is loads of fun! Super-fast and she kicks ass! At the end you fight Terrovax.

Act 3: The Right Weapon
The Broken Tower & The Pit 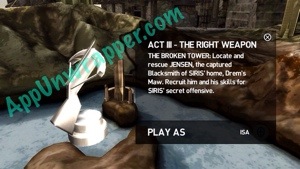 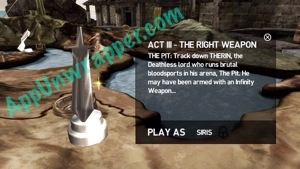 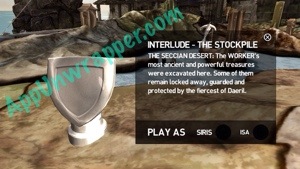 Act III gives you two separate locations. One you play with Isa, and one with Siris. There’s also the Interlude – Stockpile (you’ve seen it before), that can be played as many times as you want by either character. This will stick around until the end of the game and is useful for some extra leveling and gold. It also has four doors that can only be opened once you have certain equipment.
***Note: The latest update, 1.04, makes the Interlude disappear from the map once you’ve acquired all four unlock able treasures. So don’t get the last one until you’re ready to say goodbye to that area.***

The Pit is Siris’s location and it’s an arena, where he must battle several deathless before the boss will fight him.

The Broken Tower in Lanithor is Isa’s location and she goes underground to an area under the sea. She has to rescue Jensen, the captured Blacksmith, and recruit him to your side. She also fights a version of Thane that has four heads, called Deathless QIP Abomination. 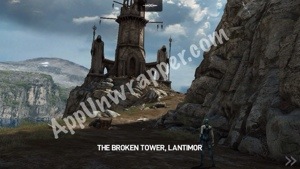 Act 4: Revelations
The Vault of Tears & The House of Kor 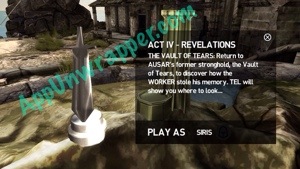 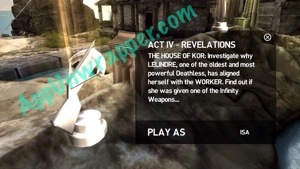 Siris’s mission is in the Vault of Tears at night. 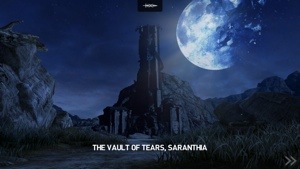 Isa’s mission is at the House of Kor, where she fights Lelindre and recruits the Gem Cutter.

Act 5 starts with Siris, but the two split up and control switches back and forth between him and Isa. Once they reach the Worker of Secrets, Isa tells Siris to go after him while she fights Raidriar.