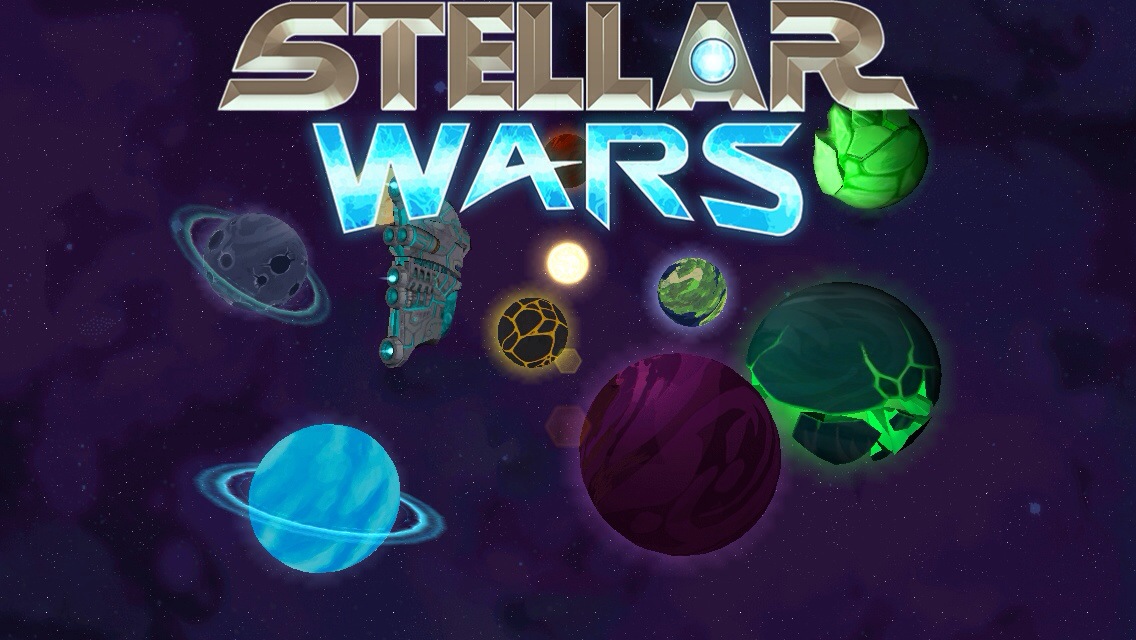 Stellar Wars is Liv Games’ third Wars game, which merges tower defense with other gameplay to create a unique gaming experience. Old players and new players should both find plenty to like here.

Gameplay: 4/5
Most of the gameplay in Stellar Wars will be familiar territory for players of Legendary Wars and/or Monster Wars. Standard missions include Minerbots that mine ore which is used to call your bots into action. Each type of bot requires a different amount of ore, ranging from 10 to 200. As you play through the story mode, you will unlock new characters, a total of ten that can be used in battle. Like the previous two games, there are some missions that break the formula and have you control one character in a side scrolling game or have you keep a specific bot alive.

But the biggest difference from the other games are the missions that involve Shipbot, your Stellar Fighter. These missions have you flying your ship in space first through an asteroid shower, then against a centipede-like Sandworm, and even through what seems like an endless barrage of green lasers. I found these flying stages to be the most difficult parts of the game, partly because my thumb covers some of the action. But I’ve been able to complete *most* of the Stellar Fighter missions with some practice. 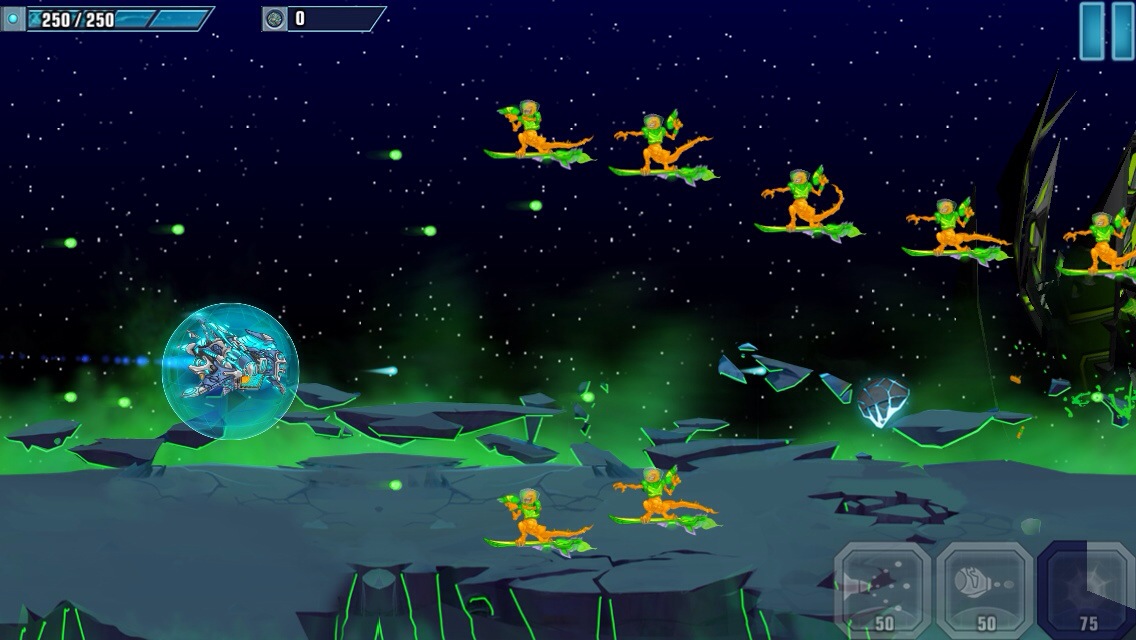 Luckily, the game is designed differently than Legendary Wars, in that each mission has three unlock-able difficulties. Instead of playing through all of normal mode, then hard mode and then hardcore mode, you can go back at any point to missions you’ve completed and try for 2.0 and 3.0 difficulties. This was incredibly helpful in building up my bots when I got stuck at a certain level. Some missions, including their 2.0 and 3.0 versions, give NOVA as a reward. 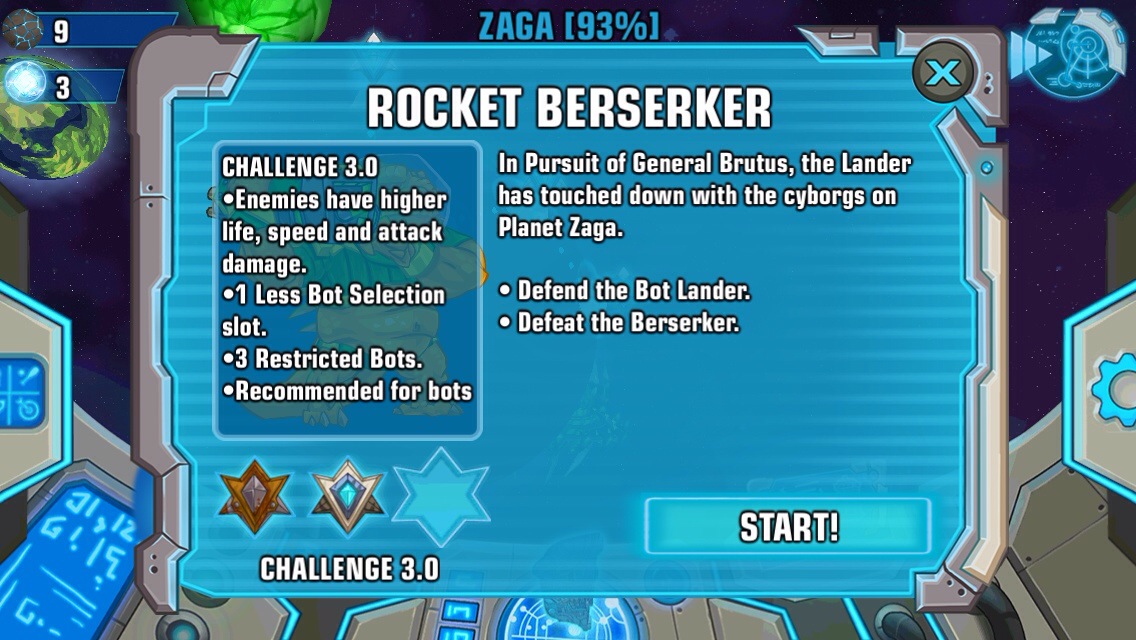 NOVAs are what allow you to upgrade a bot to level 2.0 or 3.0. So by going back to complete those extra missions, you can upgrade your favorite bots more quickly. This means you can beef up your Shipbot if the flying parts are giving you trouble. NOVAs are still quite rare, though, and you’ll want to think very carefully before spending them. Especially since the last planet in the game can be quite difficult. 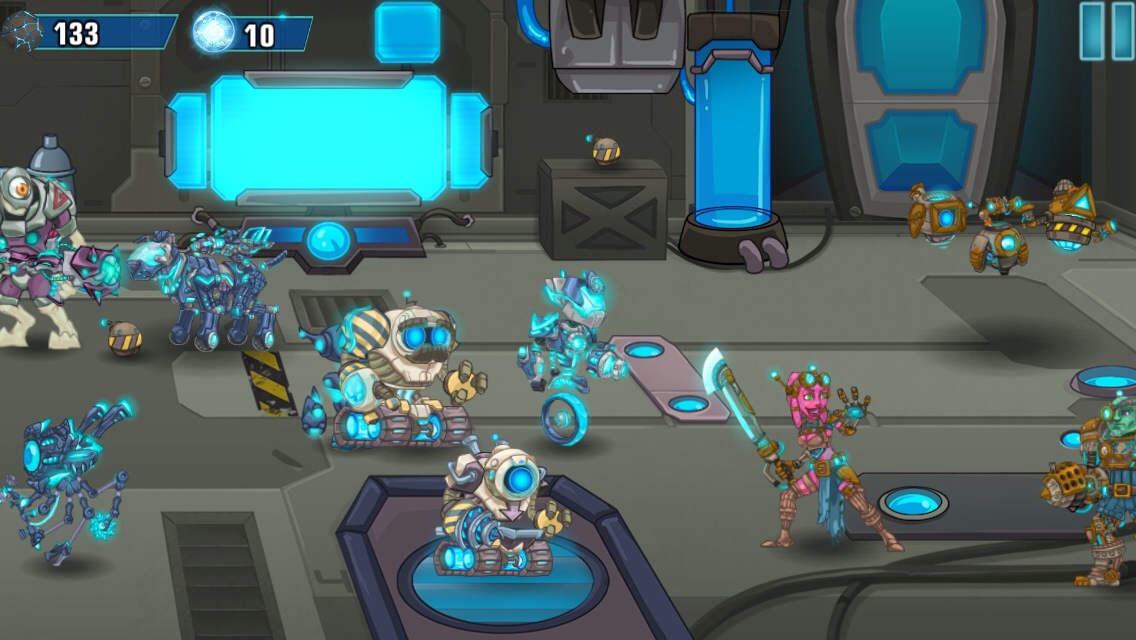 Overall, I found the gameplay mostly balanced, progressing in difficulty at a good pace. However, there were a few levels along the way that were unnecessarily easy (be thankful for the cheap NOVA!) and others being quite difficult, seeming nearly impossible to defeat. I still managed to complete almost 100% of the game (including 2.0 and 3.0 missions) without spending any money on IAPs. Keep in mind, you can use real cash to buy ore and NOVA for faster upgrades. But in the end, your success still comes down to your own skill and strategy. 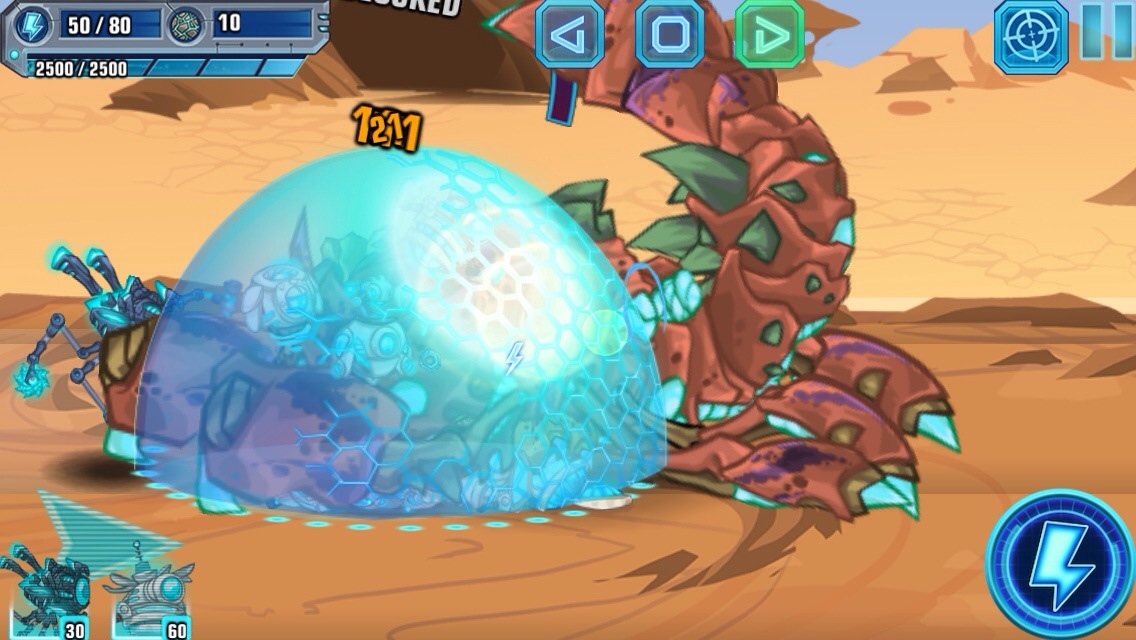 One thing I would have liked to see is more customization of robots. From the App Store description, I got the idea that we might be able to do more than simply upgrade the robots in the usual linear fashion. I thought perhaps we could choose between two different upgrades or perhaps merge different bots together (they are machines, after all). I was mildly disappointed that this wasn’t an option, but maybe that can be possible in a future upgrade? Some bots seem useless to me even at their max upgrade, so perhaps that can be a way to allow players to make their bots fit their playstyle.

Story: 4/5
Honestly, I rushed through the dialogue to get to the gameplay, but the story is of the last remaining robots looking to restore civilization in a mysterious new solar system. As they’re exploring the new planets, they find themselves in the middle of a war for the future of the galaxy. The game brings introduces you to new bots and enemies through the story, as opposed to just appearing out of nowhere. This worked in the previous games, and seems to be a solid formula.

Graphics: 5/5
I’m a sucker for Liv Games’ 2D drawings. The graphics are what first drew me into Legendary Wars, with the unicorns, dragons and other mythical creatures. Now with a new space theme, the artists do not disappoint. In Stellar Wars, we get to see desert planets, frozen planets, lava planets, even purple planets. This allows for different scenery than we’re used to from Legendary Wars and Monster Wars. As for the bots you control, they all start off looking rusty and worn down. When you upgrade them to version 2.0, they start looking more like a robot army. But at 3.0, they all take on a blue tint and look like quite a formidable group of machines. Their final upgrades are a bit reminiscent of the Skyhaven armor of the Legendary Wars heroes. The enemies range from alien spiders, slugs and sandworms to all sorts of armored lizards, and the familiar Liv Games feel is present throughout the whole game. The robots do feel a bit more polished and less cartoony than the characters of the previous games. The enemies are still cartoony, especially when they die, but they, too, feel a bit more polished. 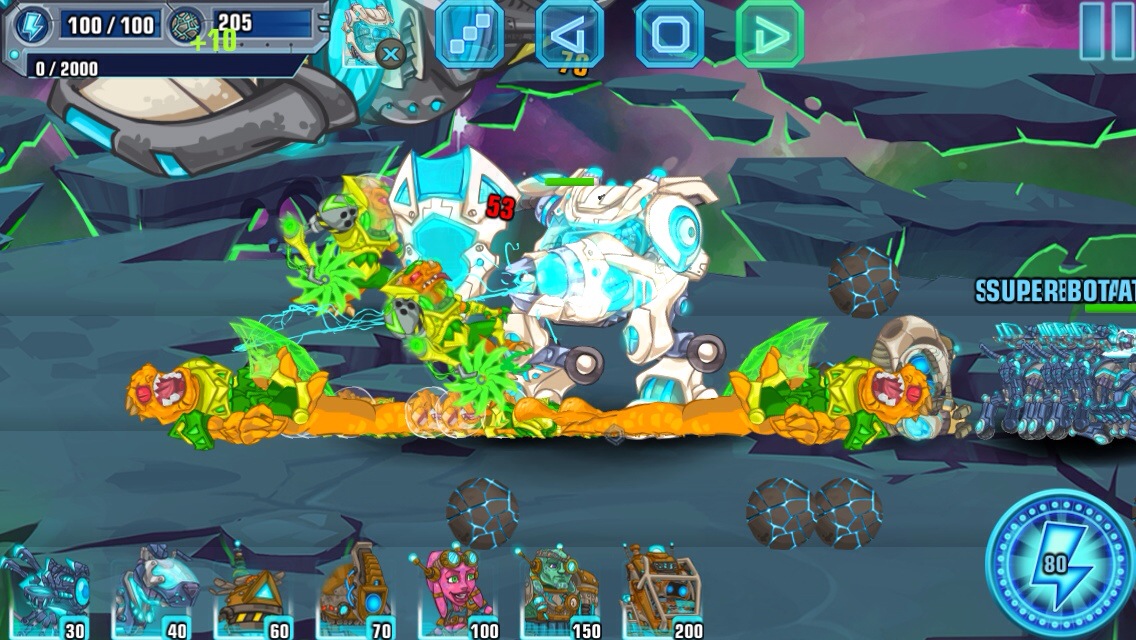 Animations are also a huge part of the Wars games, and Stellar Wars is no different. Almost every character shoots some sort of fire, laser or missile that gets more impressive with each upgrade. I haven’t experienced much lag on my iPhone 5, despite the many animations.

Audio: 5/5
Stellar Wars boasts an original space-themed soundtrack and it doesn’t disappoint. The music is usually of a techno beat, and it works quite well with the game. I never found it too distracting or annoying enough to shut it off. It’s not easy to create music that can be heard over and over and not get tiresome, but they’ve really pulled it off.

Replay Value: 4/5
The game offers quite a few hours of gameplay, especially if you’re looking to upgrade all your bots to 3.0 and complete the entire game in all three difficulty modes. However, once you do that there is no reason to continue playing. I would like to see an endless mode or arena like in Legendary Wars, that offers something besides the story mode. Liv Games is great with updates, so perhaps we’ll see something like that in the future. 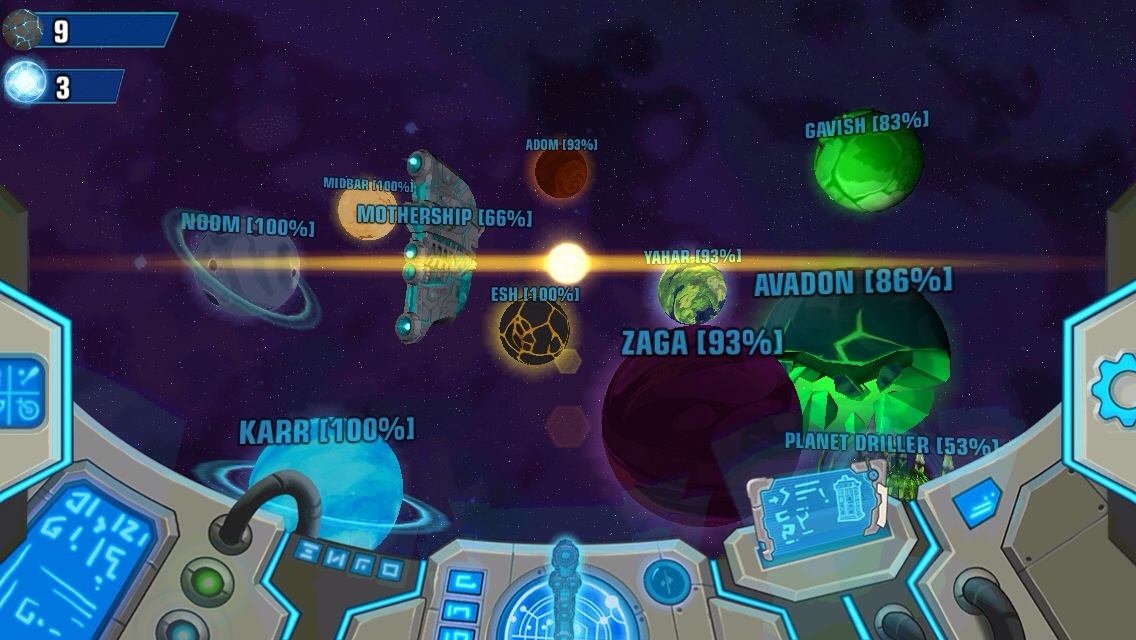 Conclusion: 4/5
If you’re a fan of Legendary Wars and/or Monster Wars, you’re likely going to enjoy this one just as much. There are some frustrating parts, but the game is open enough that you shouldn’t feel stuck at one particular point for too long. But if you’re not going to buy any IAPs, you will need to use some skills and strategy. While there are some easy stages, the game as a whole can be quite challenging, and incredibly satisfying. I do think some improvements can be made, and some rebalancing may be necessary, but the game as it stands is still quite enjoyable and more than worth the low launching price of $1.99. Download Stellar Wars here.
[DKB url=”https://www.appunwrapper.com/Stellarwars” text=”Download on iTunes” title=”” type=”” style=”” color=”green” width=”” opennewwindow=”” nofollow=””]

If You Liked “Lunar Flowers,” Check Out NetEase Games’ “The Beautiful Dream”