Some costumed vigilante once said something to the affect that “with great challenge comes great reward.” ChAIR took that as inspiration for a new mode available in the upcoming Infinity Blade III: Ausar Rising update. Available worldwide to all players December 19, Deathless Mode will truly test the mettle of even the most seasoned Infinity Blade veteran.

So what is Deathless Mode? After you’ve defeated the Worker of Secrets, a new icon appears on the World Map. This ominous skull icon is your entry into Deathless Quests. Each of the usual Quests in Infinity Blade III has been transformed into a palm-sweating gamble where you put your gear on the line for even greater rewards and fame. It’s every Infinity Blade III quest turned up to 11 on the “holy crap that’s hard” meter.

There are some rules regarding Deathless Mode.

You only enter with the Gear you have equipped. Everything else is left back at the Hideout.
Even your Gold and Chips are left behind.
You can spend Gold or Chips while on a Deathless Quest, but you’ll have to earn that spending money while on a Deathless Quest.
All enemies are tougher and are equipped with Boss Perks.
If you die, the Gear you have equipped is left behind. You will have to fight through that Deathless Quest again and defeat the Titan who killed you in order to reclaim your loot.
Lose to that Titan a second time and those items are lost forever, replaced by what you currently have equipped.
You must fully complete a Deathless Quest in order to bring all of your earnings back to the Hideout.
Sounds tough, eh? Well, taking on Deathless Mode comes with some seriously sweet rewards. All Chip earnings are doubled while in Deathless Quests (quadrupled if you have Siris’ new “Chip Booster” Skill that’s been added in Ausar Rising). There are exclusive items available only in Deathless Quests. And by beating all Deathless Quests (including defeating the Worker of Secrets), you unlock the ability to re-master items up to level 15!

The truly hearty will complete Deathless Mode five times to unlock the ability to re-master items up to level 20!! That is a tall task. But imagine your favorite gear mastered to level 20. You’d be like, double-immortal or something.

Now you know the challenges that lay ahead and you know the rewards are well worth it. The only question that remains is: Are you Deathless?”

***News about the Exclusive reward for downloading the update on day one!

We’ve included something special with Infinity Blade III: Ausar Rising, a free update for IB3 owners available December 19. On launch day, anyone who buys Infinity Blade III or who downloads the update will be able to participate in a one-time single-player Trial. The reward for this trial? A 50% Rare Defense Gem!” ***

See all our Infinity
Blade guides in one handy place.

Infinity Blade III’s free update, Ausar Rising (available worldwide December 19) delivers a host of awesome new features, including the hardcore Deathless Mode and the return of the Survival Arena. Ausar Rising also brings back two gems fans have been clamoring to slot into their items. Yep, I’m talking about the Parry All Gem (now a Perfect Parry All Gem!) and the Rare Defense Gem (commonly referred to as the Rainbow Defense Gem).

Both are back in Ausar Rising, but each has been changed from Infinity Blade II.

Rare Defense Gem
Anyone who has beaten the Worker of Secrets a few times knows that the Titans almost always have at least one form of elemental attack. This additional damage gets through any Block that isn’t a Perfect Block and can add considerable damage to any hit that connects. You can equip an Elemental Defense Gem, which protects against one specific element (Fire, Electricity, etc.). The Rare Defense Gem protects against everything. Well, with a catch…

And More!
In truth, we’ve added a number of other gems, but we’re not revealing what those are. You’ll have to discover those on your own.

The Perfect Parry All Gem, Rare Defense Gem, and a whole host of other new gems are available December 19 as part of the Infinity Blade III: Ausar Rising update.” ****

– New areas to explore, including Drem’s Maw and the Dark Citadel from IB1.
– New dragon!
– 60 new items to master!
– Hardcore Deathless mode — risk your equipped items for the opportunity to level items past lvl 10.
– New Arena Mode!
– More story is revealed.
– Exclusive items for updating on day one.
– Get the sixth infinity weapon!
– New skills, including one that allows you to remove all gems for free!
– and more! Read below:

“Infinity Blade III: Ausar Rising is jam-packed with new features and exciting content. Seriously, this free update is overflowing with goodness. Here’s a quick look at everything you’ll get on December 19.

The Return of Ausar the Vile!
Before he was Siris, the hero of the Infinity Blade series was known as Ausar the Vile. Now, Siris’ malevolent past returns and with the help of Isa, he must finally destroy his dark mirror. This new, substantial series of quests feature several new enemies, including a pair of new Deathless!

Day One Exclusive!
Fans that download the Ausar Rising update on December 19 will have a chance to score an incredibly rare gem. More details on what the gem is and how you’ll claim it will come soon.

Enter the (Second) Dragon
Infinity Blade III players have been clamoring for more dragon action and Ausar Rising delivers! Once you’ve defeated the first dragon, Ba’el, you will be able to find a second dragon named Pisci. This new, persistent enemy will show up in a variety of locations, including new areas from Ausar Rising. Do enough damage over time to this second Dragon and you’ll open up a new kill quest to take her down, finish her off, and claim her extremely rare treasure!

Not for the Faint of Heart: Deathless Mode
Looking for even more of a challenge from Infinity Blade III? You’ve got it. Deathless Mode turns normal Infinity Blade III quests into ultimate tests of skill. Equip your best items before you enter a quest, because once in, all your unequipped items, gems, gold, and chips are left behind at the Hideout. And if you die? You drop everything you had equipped and everything you had won and will have to fight your way back to claim your loot! But it’s worth the effort as there are Deathless Mode exclusive items and those who make it through Deathless Mode unlock the ability to master items beyond level 10!

Enter the Survival Arena
The Survival Arena puts you in a series of progressively harder tests against a horde of Titans. Will you gamble your current winnings for a chance to earn even more against even tougher opponents in the next tier?

New Items, Gems, Skills, and Goals
Infinity Blade III: Ausar Rising adds more than 60 items for Siris and Isa, along with new gems and some new Skills and Goals. Some examples of a few gems you ask? How about newly designed versions of the All Elemental Defense gem (AKA the Rainbow Gem) and the Perfect Parry All Gem. What about some of the new Skills? Well, there is Master Looter that lets you tap one gold bag in the world and collect all rewards in that area, or how about Chip Booster that doubles the Chips earned in battle challenges, or there is our favorite new skill – Free Gem Removal.

Trade Tips In-Game with MyMob Chat
As if all this weren’t enough, we’re proud to introduce a brand new feature that we think will greatly enhance how players experience Infinity Blade III. With MyMob you can talk with your friends, leave notes about quests, and urge for help in ClashMobs.

Holiday Helms
Last, but certainly not least, new Holiday Helms will help you celebrate the upcoming festive times. First up – and available the weekend Ausar Rising releases – you can get your “Ho Ho Ho” on with a helm worthy of Santa Claus. What’s it look like? Be sure to “Like” the Infinity Blade Facebook page for a first look coming very soon.

Infinity Blade III: Ausar Rising is available worldwide as a free update for all players on December 19.” ***

Check out the official preview video!
——-

So far, we’ve seen these two photos and were told that it’s the biggest content update for any IB game ever! Make sure you have plenty of room to download the update! (Previous updates required over 2.2 GB of free space.) 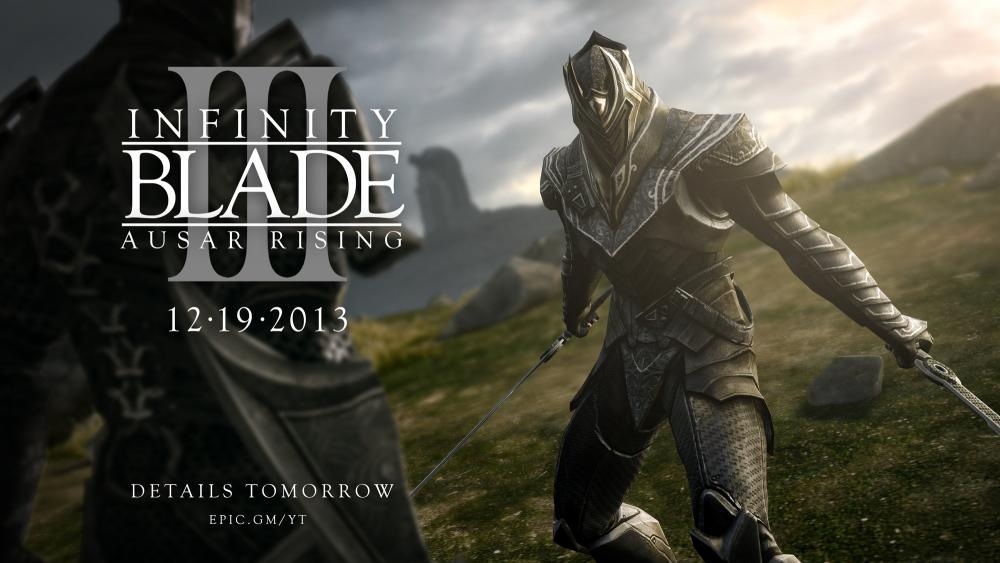 Check back here for more info. And download Infinity Blade 3 if you haven’t yet!

Also, make sure to join the 47 Ronin Clashmob on December 13th for your only chance ever at a sword from the movie!

See all our Infinity Blade guides in one handy place!