I’ve spent a lot of time playing Phantom Rift by Foursaken Media. I haven’t completed the game yet — it’s quite big — but I’ve given it enough time to see quite a bit of the world, collect a decent number of spells and equipment, battle a large variety of enemies, and even encounter a few hidden secrets. The fact that I’ve spent hours upon hours doing so is either good or bad, depending on what you’re looking for. To me, it’s a mixture of both.

The game consists of quite a bit of exploration. You walk around and explore the overworld made of cubes that rise and fall around you, talking to glowing orb-like creatures called wisps and looking for portals into different realms. Once you enter a realm, you need to make your way to the exit, breaking objects in your way and opening any chests you stumble across. The animation when your character breaks objects is incredibly satisfying, even when you don’t get any orbs from it. You levitate it off the ground and then it explodes in the air. The music and sound effects are also superb. The overworld music is eerie, immersive and fits the mood very well. The battle music is fast-paced, but never distracting. I never felt the need to mute the game or use my own music because it all works so well. 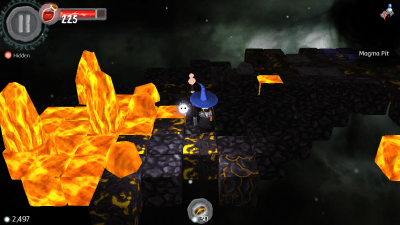 Eventually you’ll reach the final level of a rift, with a boss you need to defeat in order to gain the ability to break pillars of that realm. Breaking those pillars in the overworld will grant you passage to another realm, allowing you to progress through the world and the story. 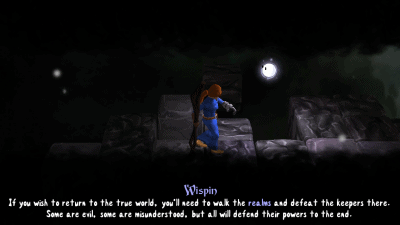 The other main aspect of the game is battle, which you can be thrust into at any point that you’re walking. Inspired by Mega Man Battle Network, it has you on a 3×6 grid of tiles. Half of the board is yours, and half is your enemies’, but certain spells will allow you to cross over to each other’s sides. You face up to three enemies at a time. Battle is very fast-paced and skill-based. You start the battle by choosing from five random spells from your pouch, which you can only pick if you have enough mana available. Once you have those spells in your hand, you can use them against enemies. The battle pauses when you pull spells from your pouch, but otherwise everything happens in real time. 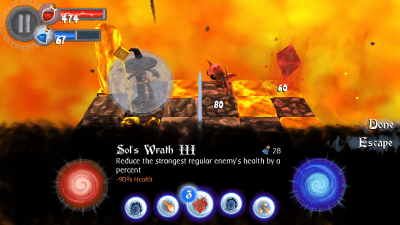 The battle controls work perfectly for a touchscreen. Thereare are no silly virtual joysticks. Instead, you swipe anywhere on the screen to move around, tap to fire your weapon, and tap and hold to charge any secondary spell your staff might have. This means you can focus your eyes on the battle itself and on your spells, without having to worry about where your thumbs go. It’s a good thing the battle controls are so tight, because the battles are incredibly fast-paced and challenging. 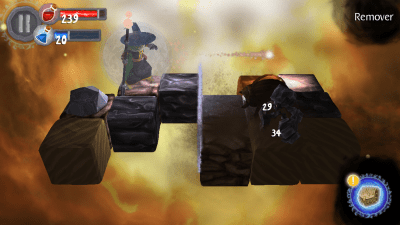 Success in battle depends on skill and strategy, but also quite a bit on luck. You could get a particularly brutal mix of enemies and the wrong mix of spells to choose from. Sometimes it also depends on the equipment and spells you loot or buy. But even the best equipment can’t help you if you don’t have fast fingers.

If you’re a more casual player who likes to grind in order to get more powerful, keep in mind that tour character caps out at level 20, and the gear caps off at Legendary. So if you’re having a hard time even at level 20 with all Legendary equipment, there isn’t a whole lot you can do besides improving your own skills. But this is something that probably wouldn’t bother more hardcore players. 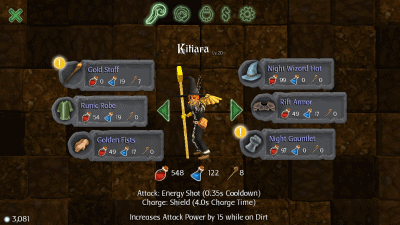 By reaching certain points in the game or talking to certain characters, you’ll earn a number of artifacts that will allow you to perform useful actions outside of battle. Each one costs some orbs, the currency of the game. There are healing artifacts, one that allows you to warp out of a dungeon if you’ve had enough. There’s also a very useful one that will reveal all treasure chests and the exit on a map so you can head straight to them. If you don’t use that artifact, you will unravel the map as you walk, only seeing pieces at a time. 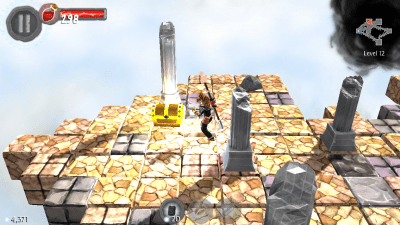 While it has quite a lot to offer, Phantom Rift is not very mobile friendly. Walking around is slow and the areas are big, so you can’t get anywhere if you only have a few minutes to play. On the flip side, the battles you encounter are so fast that if you try to play anywhere you might get distracted for even a second, you’ll most likely end up dead. The game isn’t very forgivable with deaths, either. If you die, you get sent back to the beginning of a dungeon, forced to make your way back to where you were, even if you were already at the boss. Sometimes you’ll have the option to spend some orbs to revive on the same level, but doing this a lot, along with healing after death, can eat up your funds. 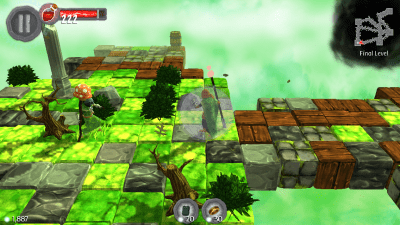 Movement speed is painfully slow, but there are pieces of equipment you can find that increase it. The problem is, you’re likely sacrificing some other item bonus that would help you in battle. That seems like a big waste, since walking speed doesn’t affect battle itself. However, Foursaken has increased the movement speed for the next update, which will hopefully make a big difference. Foursaken is really on top things, listening to players and adjusting bits and pieces to make it more enjoyable. 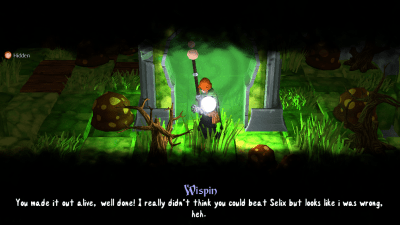 I found myself wishing that the game was laid out a bit more like Infinity Blade, to make it more mobile-friendly. The battles should remain fast-paced and challenging, but you should get to retry if it doesn’t go your way, instead of having to walk all the way back. I think the game needs to be a bit more forgiving about death, considering how fast-paced the battles are. 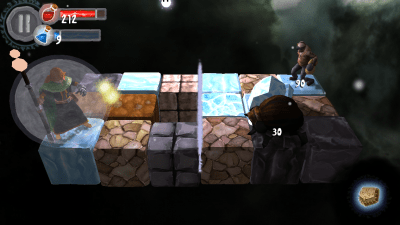 I also would have liked to see a way to teleport around to different areas and wisps (such as the merchant wisps) without having to walk there. I enjoyed the exploration and uncovering everything in the world, but I want to get back there more easily. The fact that nothing is really labeled on the map makes it extra tedious to find things. Which wisp wanted what? Which portal goes where? If I could warp around once I found a location, it wouldn’t feel like such a time-waster. 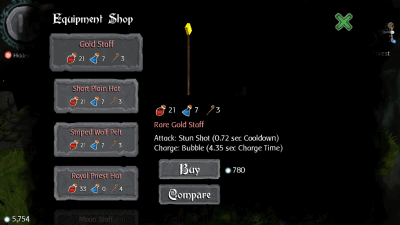 One of my favorite features of the game is the forge. At a certain point in your travels, you’ll encounter a Wispen that allows you to forge different pieces of equipment together, for a chance at a better item. I love the equipment forge. You can throw anything into the forge — as many pieces as you like. After you add a piece, you’ll see how it affects the chance of the rarity of the item you’ll receive. It’s a good way to get rid of equipment you’re not using, with some risk involved. I wish the game offered a similar tool for spells, as you collect a lot that you might not use. 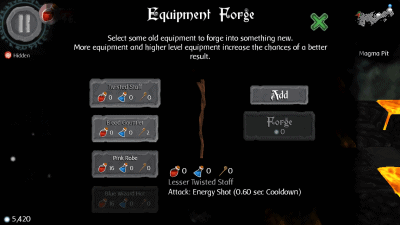 Phantom Rift has quite a lot to offer, but you really need to have time for it. If you’re looking for a game that will give you hours upon hours of playtime, it is definitely a good choice. There are secrets to uncover and pretty much endless amount of gameplay, since the dungeons have a seemingly infinite number of levels, with stronger enemies in each one. Between the exploration, the collecting, and honing your battle skills, the game should keep you busy for quite some time. But if you only have a few minutes here and there to play, you might get frustrated. If the game could be more pick-up-and-play mobile-friendly, I could see it being a permanent fixture on my iPhone, just like Infinity Blade.