Have you ever wanted to feel what it’s like to be a dolphin? What better way to do so than through a video game? I know what you might be thinking: dolphins aren’t new to the gaming world. Just about everyone’s heard of Ecco the Dophin, who’s been around for decades now. But Ecco was more of a classic action-adventure game featuring a dolphin, as opposed to a simulator. There have been some other games since then, but they’re more about having a pet dolphin than becoming the animal yourself. Well, thanks to the folks at Max and Haley LLC, you’ll soon be able get the full dolphin experience in their upcoming iOS game called I Am Dolphin. 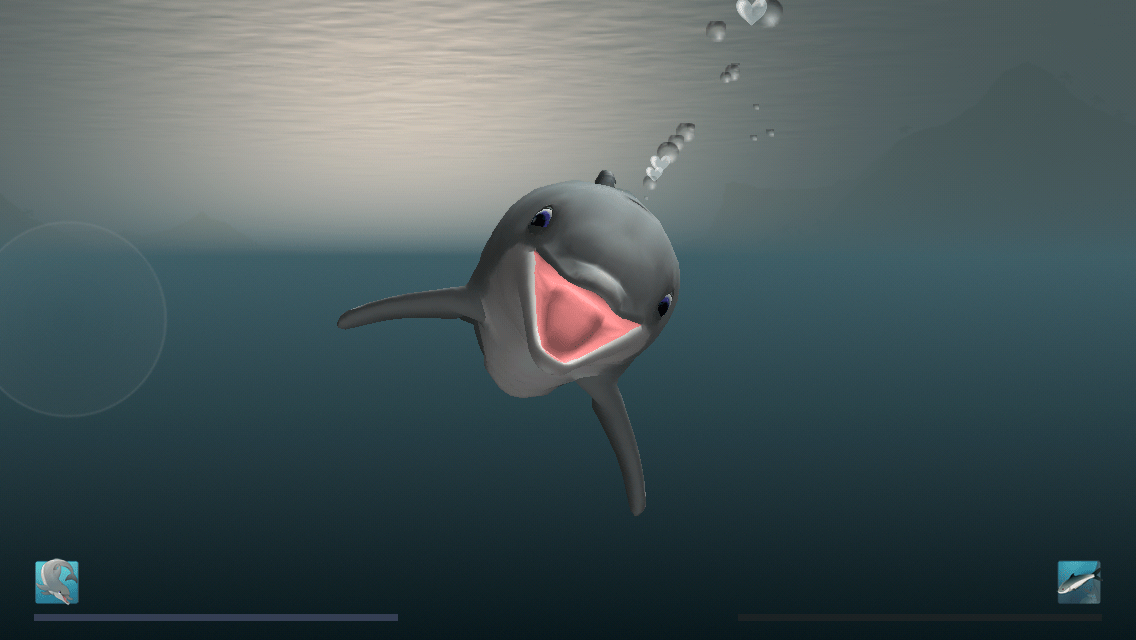 I got my hands on the beta version of the game, and it’s incredibly impressive and addictive. I spent two hours playing right off the bat without even realizing it, and have put in quite a few more hours since. I just keep wanting to come back to it. iPhones and iPads are the perfect platform for the game, because they allow for close and personal, tactile controls via simple swipes across the screen.

The best way to understand the game is to play it yourself, but I’ll try to give you a sense of how it works. You basically control a 3D bottlenose dolphin named Bandit (you can also unlock Simon the Commerson’s dolphin and Zoey the orca whale) by guiding him with your finger. There’s no directional joystick or button combos to make him do a specific move. You simply swipe where you want him to go in the 3D landscape, and he goes. There is also a transparent Boost button to the left that makes him torpedo through the water. You don’t need to wait for a timer to fill up, either. You can boost (or not boost) as often as you like. The dolphin’s movements are smooth, graceful, and incredibly realistic. It’s exactly how you would expect a dolphin to swim. The video below shows a little bit more about this:

The idea is to make you feel like you are the dolphin, to empathize with him, be as one with him. The game does a pretty good job at accomplishing this via its lifelike visuals and fluid controls. Omar Ahmad, PhD, the director of the project, explains:

“The movement of your finger gives the dolphin its ‘intention’ which is in its 3D world. But it’s very tactile because you’re touching the screen. The tricky part was predicting your 3D intention based upon your 2D swipe and harmonizing it with the dolphin’s intention. Then, the dolphin calculates all of the muscle forces and torques in order to go where you and he both intended. The artificial intelligence (AI) for the intention control is fairly sophisticated – but that is what makes the magic. You don’t think about it — it just moves. When you play, just move him thinking I want to get that fish.” 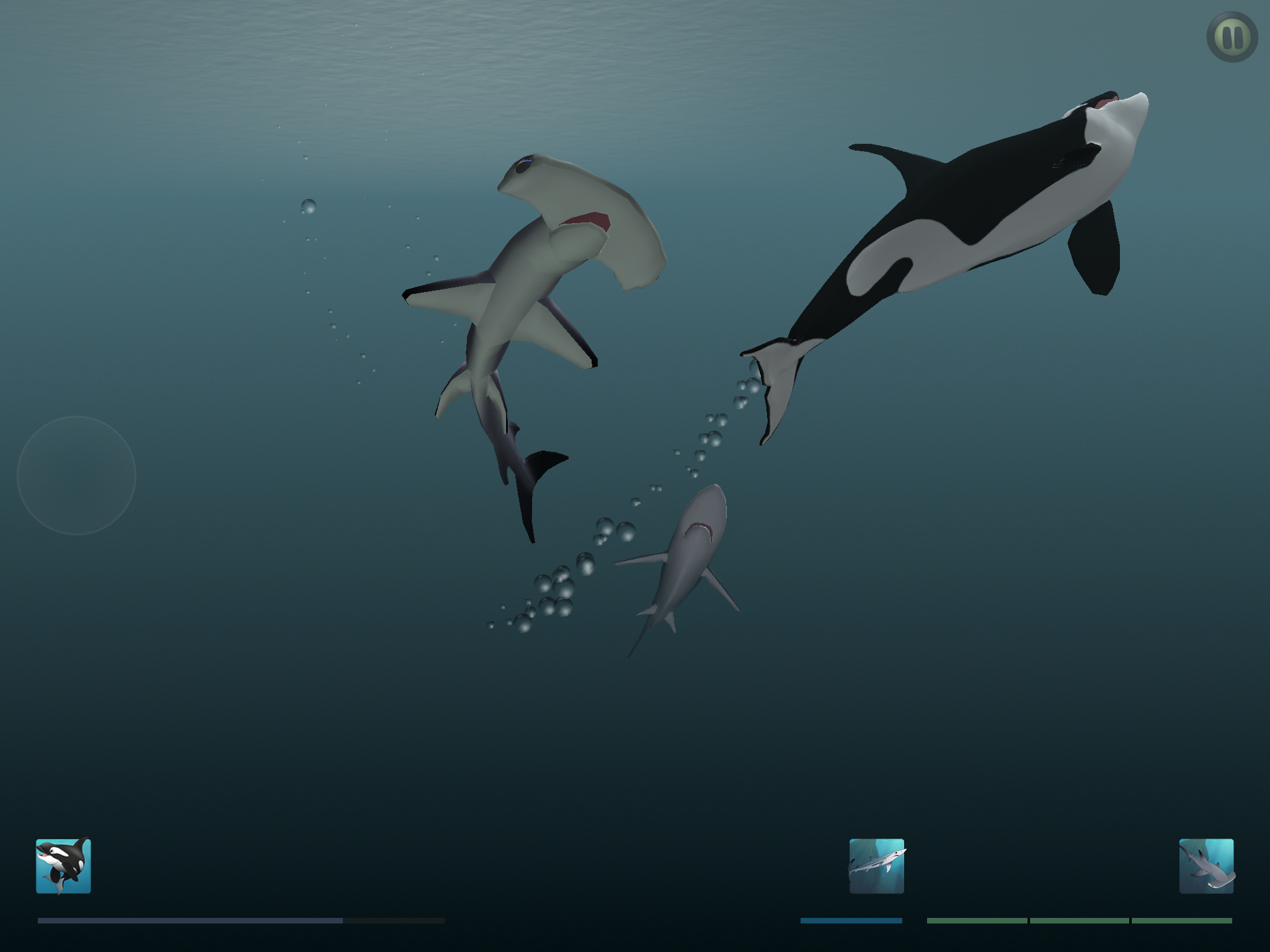 The main gameplay involves battles where you take on a number of underwater creatures in a fight to the death. Each shark and fish has unique locomotion and intelligence. Some lurk carefully, waiting for the opportune moment to strike. Others are aggressive, betting your reflexes aren’t quick enough to turn predator into prey. Others sneakily avoid conflict and try to outsmart you.

Early on, the enemies will be a bit easier so you can hone your skills, but as you progress, they get smarter and tougher. They actually pay attention to your moves, as opposed to just following a blind pattern. The fish also act differently if they’re alone or in a team of two or more. A group of tiny snapper fish can be quite vicious, despite their unthreatening appearance. You must learn and adapt or become dinner.

There is also quite a big variety of enemies. Your encounters will include ten types of fish including salmon, herring, mackerels, mahi mahi, and nine different sharks, including dogfish, hammerheads, and even great whites, all wanting a piece of you. But don’t worry — the game is family-friendly, as there’s no blood involved. Instead, attacks are visualized through small flashes of white light. When you finish off an enemy, Bandit will swallow it whole, then smile and chatter happily in a realistic dolphin voice. 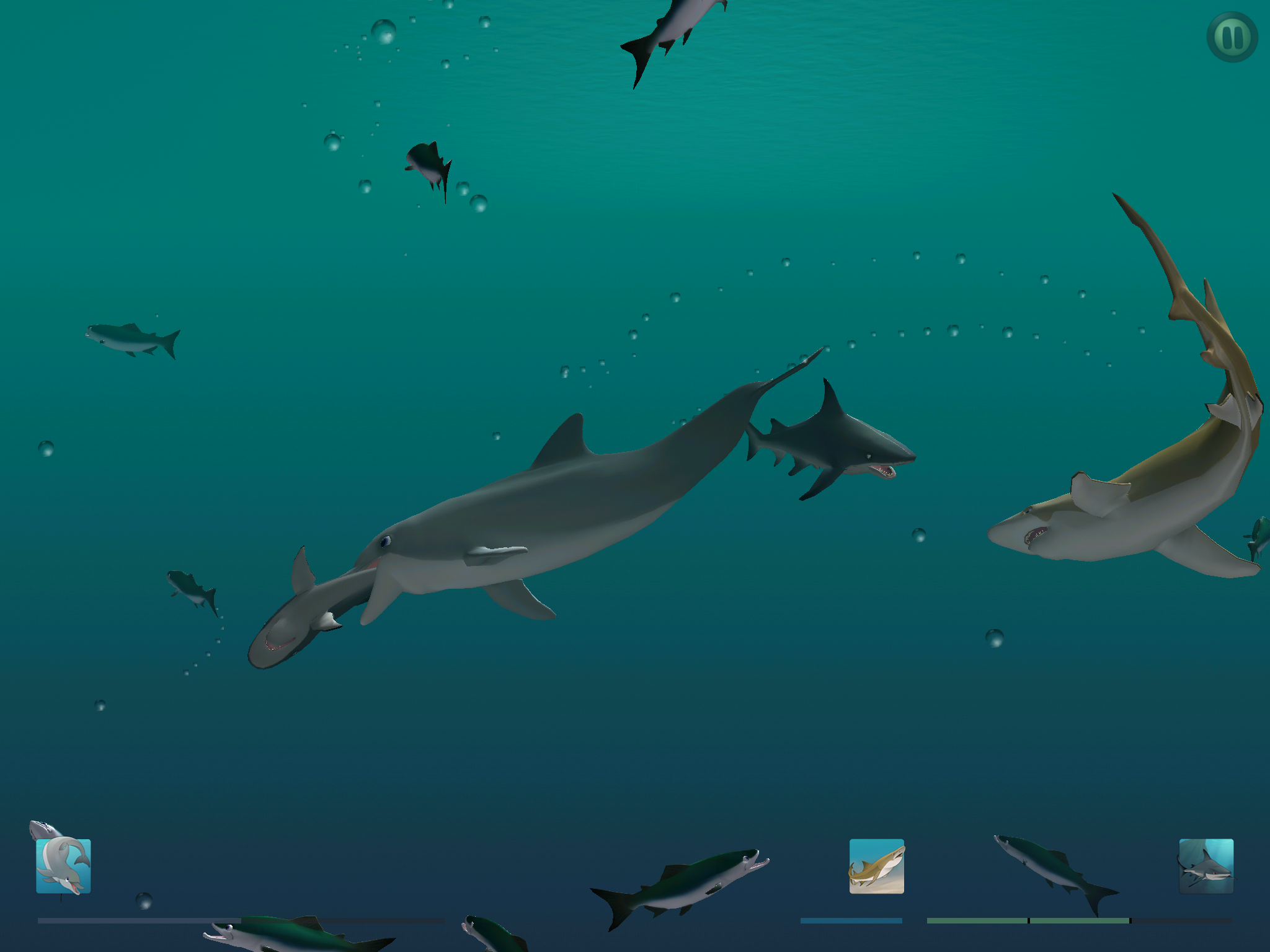 Speaking of dolphin chatter, the sound effects also play a huge part in bringing the animals to life. Chomping noises, splashes, and even cheerful orca songs help to immerse you in this underwater world.

Even though life as a dolphin is often an adrenaline-pumping fight for survival, it is also majestic. When your dolphin and the enemy fish get close to each other, dodging each other’s attacks, it creates a beautiful underwater dance. Watch this trailer below to see for yourself:

One really nice aspect of the game is that it appeals to both casual and hardcore players. If you’re having trouble with a certain fish, you can skip that battle and try one that’s more your speed. However, the highly sophisticated AI of the enemy fish ensures that skilled players will be sufficiently challenged. Don’t let the simplicity of the controls fool you into thinking this isn’t a proper game.

For those who just want to see how it feels to be a dolphin, there’s also a “Free Jump” mode where you can swim around and do flips in the air for a certain amount of time. This is a nice break from the battles, where you can mess around, carefree without any stress. 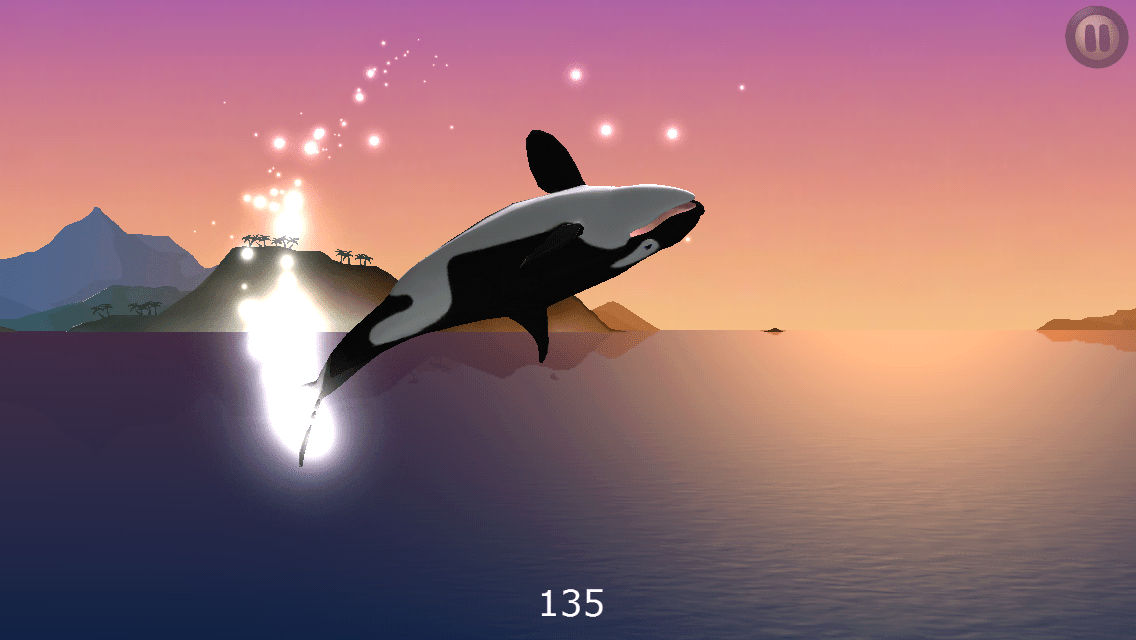 While the game already has quite a bit to offer, there are several additions being worked on for later updates. These include power-ups such as sonar and sonic bursts, a beluga whale playable character, flying fish that you can only catch by jumping out of the water, underwater rocks and cliffs that you have to navigate, and much more.

The creative team behind I Am Dolphin is made up of Dr. Omar Ahmad, Promit Roy, Kat McNally, and Dr. John Krakauer of Max and Haley LLC in collaboration with the Kata Project at the Brain, Learning, Animation, and Movement Lab (BLAM) at the Johns Hopkins School of Medicine. Jeff Anderson of 3Dio Sound is responsible for all the beautiful sound effects and music. Dr. Diana Reiss, an expert in dolphin behavior, consulted on the project. Together, the group is also working on an exoskeleton version of the game that will be used to help stroke patients towards recovery. So besides being fun, it also possesses healing powers! 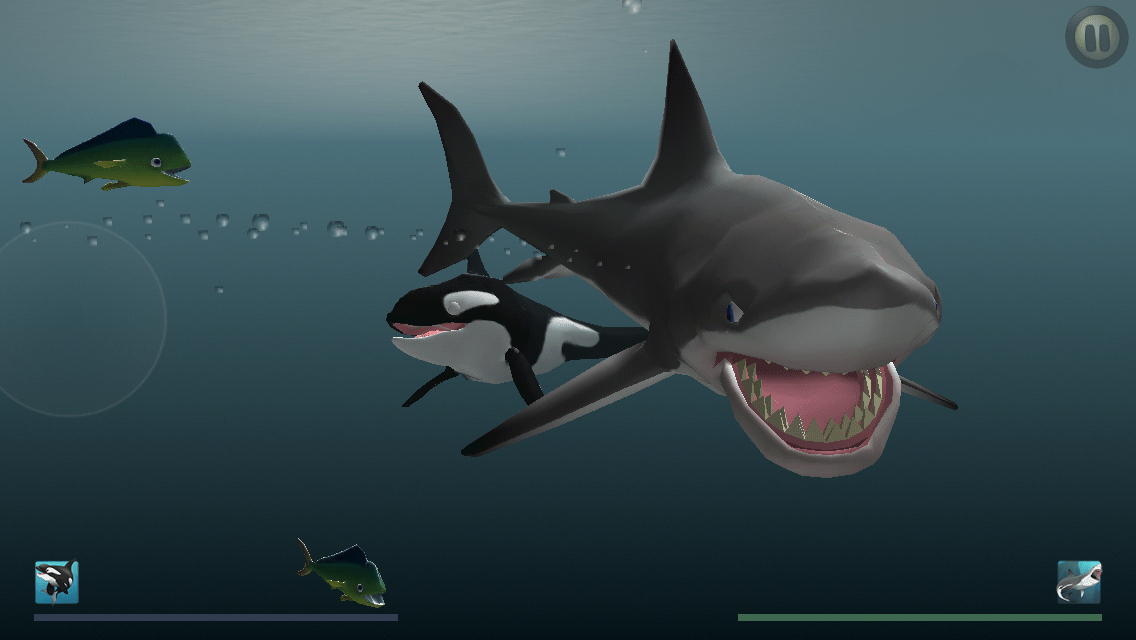 I Am Dolphin was developed with a game engine the team built from the ground up. In addition to frequent content updates, the developers plan to use the engine to create other simulators, from birds to dinosaurs, and even dragons! So if you like the game, keep an eye out for their future projects. They have a very noble mission statement, and it’s evident through the work invested that these aren’t just empty words: “To build experiences that inspire people by the majesty of life. To teach people to love and respect nature. To awaken the creativity that lives within all of us.”

I Am Dolphin is now available for iPhone 4S or above, iPod 5 or above, and iPad 2 or above for a one-time price of $2.99 that includes all updates and no in-app purchases (IAP).[DKB url=”https://www.appunwrapper.com/IAmDolphin” text=”Download” title=”” type=”” style=”” color=”green” width=”” opennewwindow=”” nofollow=””]