This will be a walkthrough guide for the iOS version of Oddworld: Stranger’s Wrath, with hints, tips and tricks to get you through the game. This is a work in progress, so please bear with me. Feel free to ask for help in the comments section.

There are two points-of-view (POV) you can swap between. They each have their different uses and controls. For both POVs, touch the left side of the screen to move your character (Stranger) and touch the right side of the screen to move the camera. The camera is also controlled by gyroscope (tilt controls), but that can be turned off in the settings. However, it will be hard to aim your weapon without it.

If you’re injured, shake your device to restore health. It requires stamina, though, which slowly recovers over time.

If you need to see your bounty list and your ammo/gold, tap the question mark in the upper left corner of the screen, then select “inventory.” 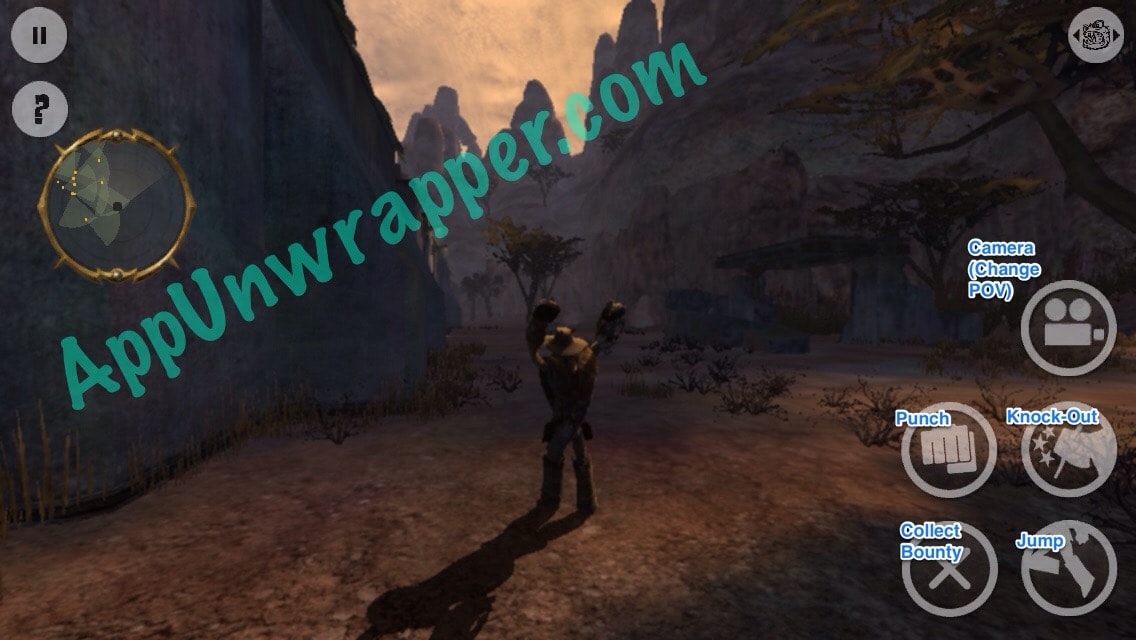 First, keep in mind that if you walk continuously for a certain amount of time, Stranger will start running on all fours. Looks pretty darn cool.

There are five buttons here. The top changes your perspective from third-person POV to first-person.

The next row is a punch, which makes Stranger swing his arms around and do a little damage. He can also use this to destroy small obstacles like barrels and fences. The button next to that is a head-butt knockout attack. It has more force than a punch, but can only be used up close and personal. It can also can knock down bigger objects like tougher fences.

The bottom row has the Collect Bounty button, which sucks up a bounty when he’s lying unconscious or dead. You need to get very close for this to work.

The last button in this perspective is the Jump button, and I recommend doing your jumps in third-person so you can see your surroundings. I’ll talk more about that below. 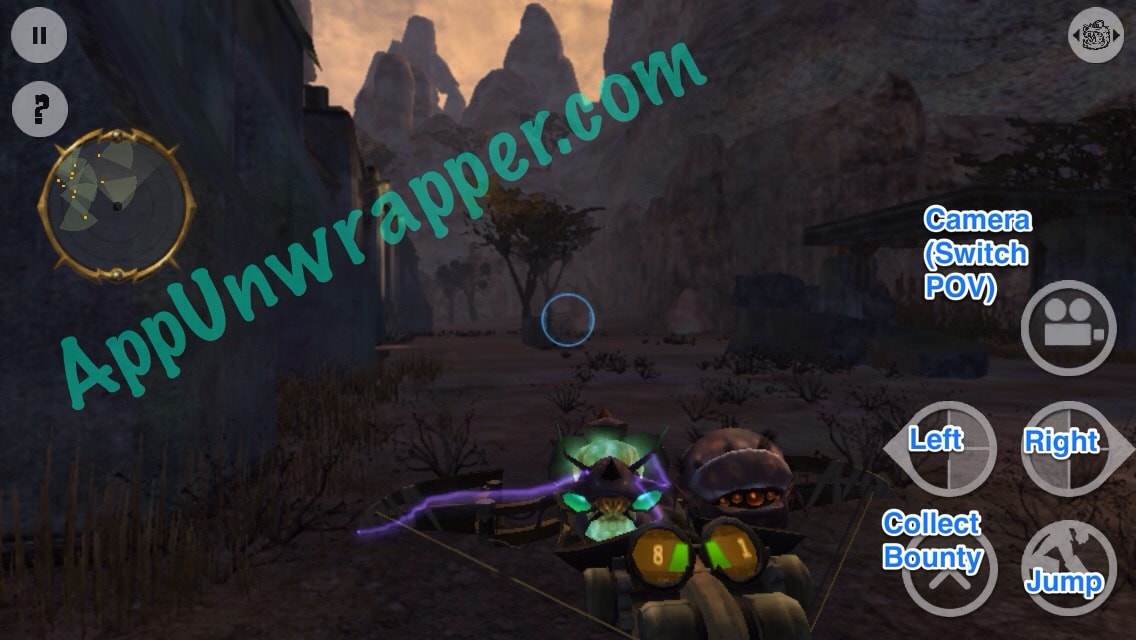 The POV also has five buttons. The top button switches back to third-person POV.

The next row controls your crossbow. The left button fires whatever critter is on the left side, and the right fires what’s on the right. Tap the icon in the upper right corner of the screen to select different ammo for each side.

The bottom row of buttons is once again Collect Bounty and Jump.

If you need to get up onto a small platform, press the Jump button while moving. Some platforms are bigger, so you need to tap the button twice to get up higher.
And finally, if you need to jump over a gap, run to the edge and press Jump, then press it again while in the air.

You can also use the jump button to climb on and off of ropes. 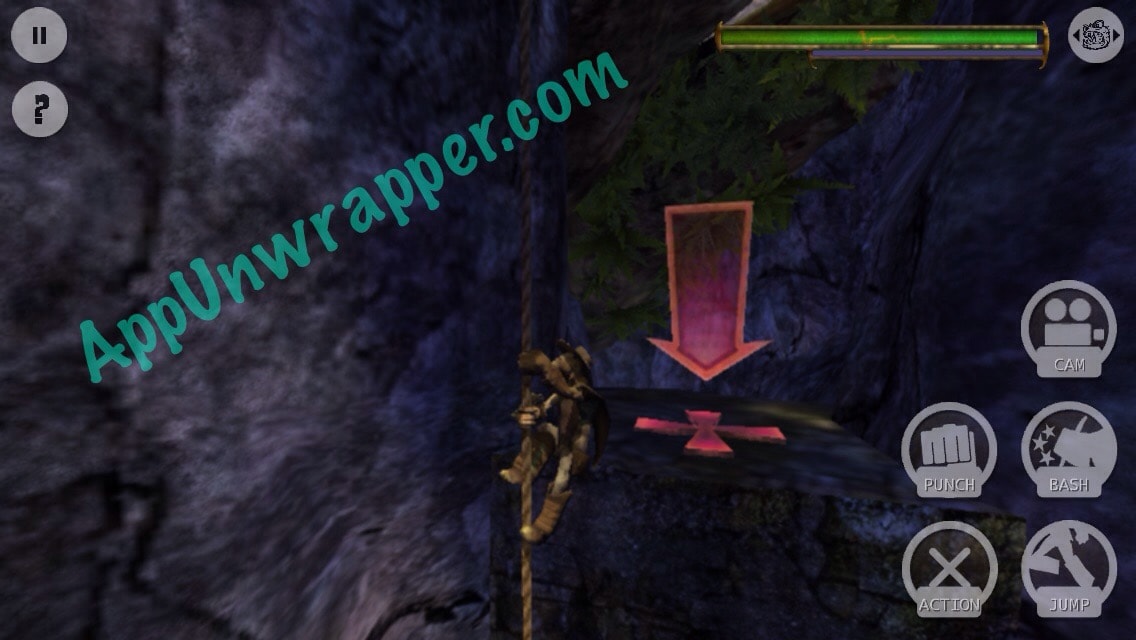 Ammo comes in the form of little critters that you need to hunt and collect when you run out. Each one has a different use. You need to use first-person POV and the Zappflies to hunt the other critters. Then walk over them to collect them. You can only hold a certain amount at a time, though, so if your bag is full, they’ll just lie there.

Zappflies: These are your main weapon, because you have unlimited ammo. They send a shock to your bounties. They are are also used on switches to open doors and work other mechanisms. When not used for a little while, they will automatically charge for a stronger attack. I prefer to always keep these in my left cartridge.

Chippunk: These can be used to lure enemies to a specific spot so you can set a trap for them. They don’t do any damage themselves, so only use them if you have a plan.

Bolamites: These spider-like critters shoot a web that incapacitates the enemy for a brief time.

Fuzzles: These little guys will attack an enemy and can be left on the ground as a trap. They’re great because they don’t need precise aiming, so if you’re in a frantic situation, you can shoot them near your enemies and they’ll find them. They often end up killing the bounty, though, so you might not want to use them if you’re trying to take the bounty alive.

Thudslug: These creatures fly, so you need to shoot them out of the air if you want to catch them. They’re really useful, though, as they do some damage and knock the enemy down. So they’re great for capturing bounties alive.

Boombats: They explode, damaging all enemies. You first find them after defeating Looten Luke. 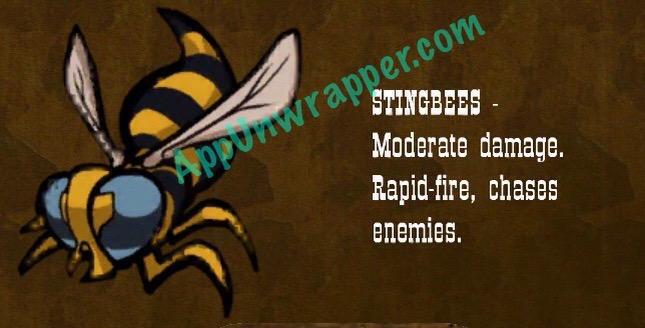 Stunkz: These can be shot near a group of enemies to stun them all briefly. Found during the tutorial, and then during the Eugene Ius mission.

Tip: After defeating Looten Luke, climb up the rope in the building where he came from. Keep climbing until you’re inside the water tower. There are treasure chests scattered about, so pick up all the Moolah! 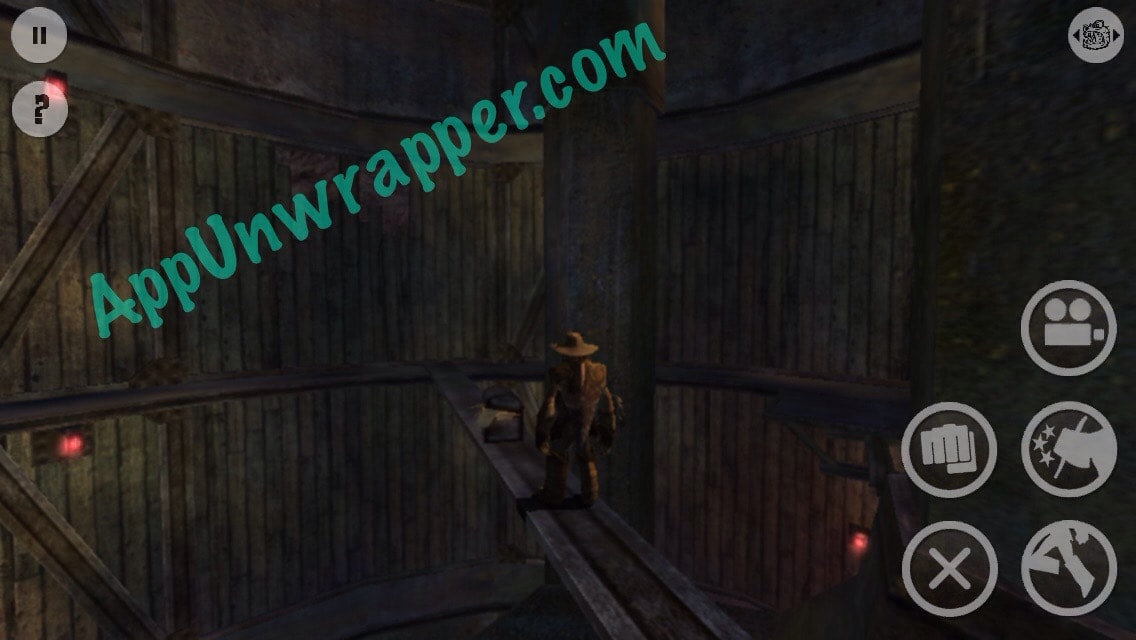 Sale: God of Light for iOS is currently FREE!