World of Khaos is a real-time tower defense game that takes place in a post-apocalyptic world ruled by a fanatic with a huge army of robots, mutants and cyborgs. You control the last resistance base, which mostly consists of a giant gun on the left side of the screen that pivots to point at enemies. To do so, you simply tap and drag your finger anywhere on the screen in the direction you want it to point, and it will automatically shoot as long as your finger stays on the screen. You must use this gun to fend off waves and waves of enemies bent on destroying the base. 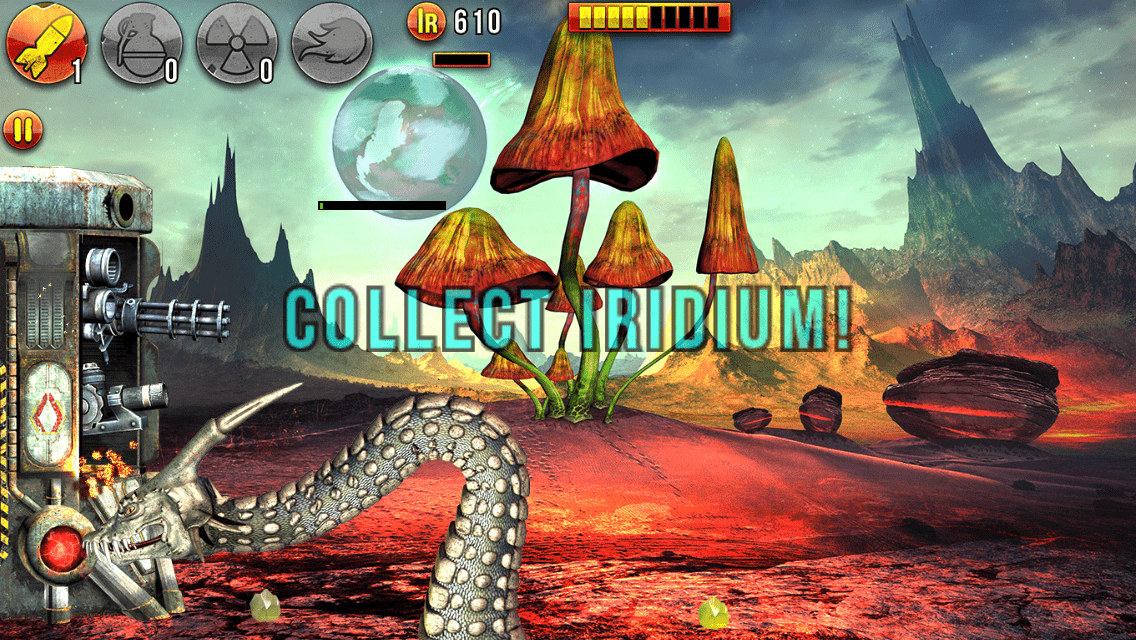 In addition to your gun, there are lots of power-ups and specials. Some of them drop from the sky and you have to grab them before they disappear. Others have a meter that, once filled up, can be activated. Some of these power-ups just temporarily make your gun more powerful. Others are more like specials that act independently of your gun. For instance, missiles home in on enemies, taking some pressure off of you. Grenades just land on the ground and explode. A nuclear missile will explode in the center of the screen, causing massive damage to all enemies around it. First aid kits will replenish some of your health, and can mean the difference between life and death. It’s hard to capture the game in screen shots, so you can watch this video I made to see it in action:

You can watch more of my gameplay footage here.

As you progress to a new stage — there are 21 total — new specials will be introduced, like shields, exploding barrels, and even a fighter pilot who can be summoned to drop bombs as she flies across the screen. Deciding whether to save up some of these specials or using them immediately is the main strategy part of the game. It would be a waste, no matter how tempting, to shoot off your nuclear bombs when there aren’t too many enemies on the field. Additionally, you can buy upgrades between stages using the currency of the game, iridium. 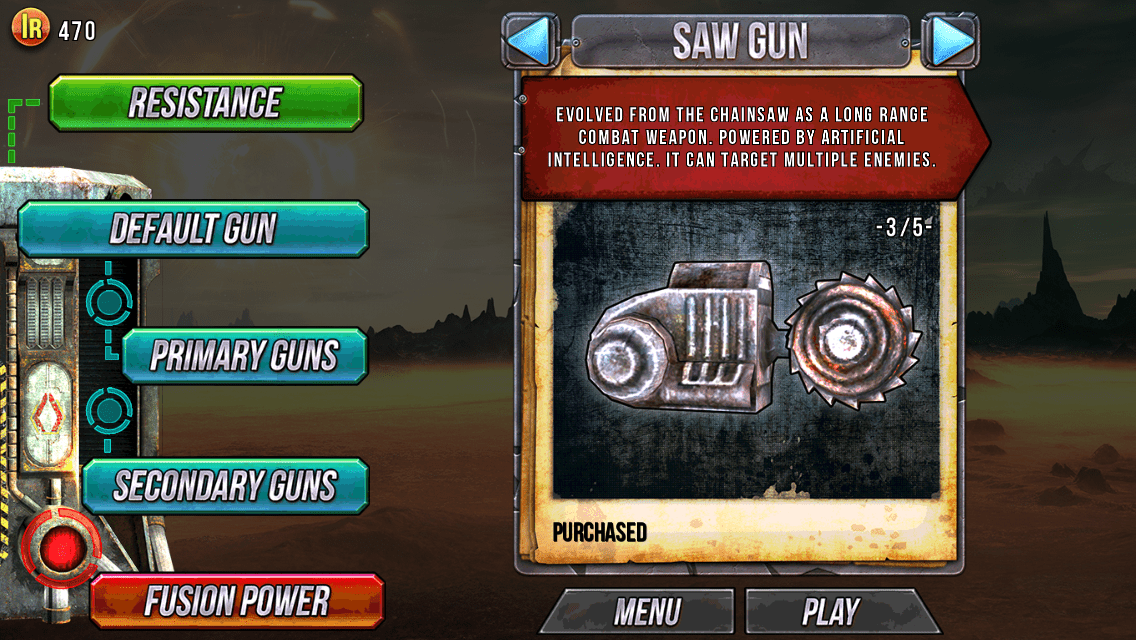 Upgrades must be bought in a linear fashion, but you do have choices on which to upgrade first. For instance, if you have some iridium to spend, you might only have enough to upgrade either your defense, your main gun or your secondary gun. It’s hard to say which one will help the most on your first play through, so those choices can be hard (and risky) to make. This adds a bit more strategy to the game. At some point, you will be forced to upgrade your defense more before you can further upgrade your guns. So you can’t just upgrade one thing to its max and leave the others for later. 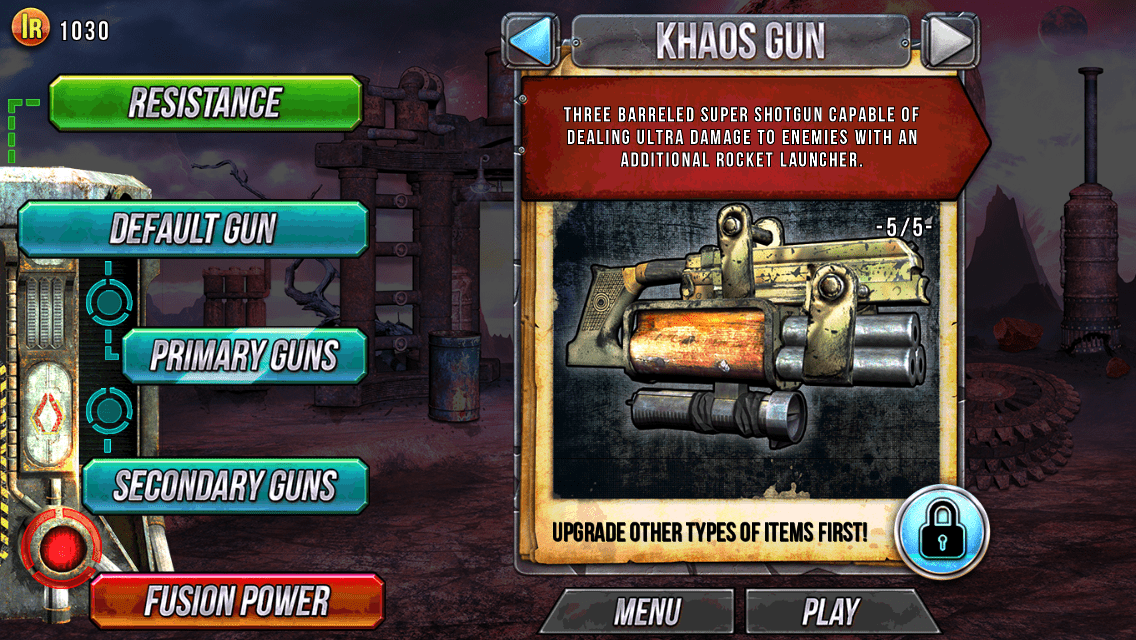 It’s a frantic, fast-paced game, and I found it quite enjoyable. But it’s not perfect. I had a few issues with the game, but they might not bother more hardcore players. My main gripe is that iridium must be collected piece by piece (10 iridium each) amidst all the chaos. If you don’t grab the iridium within a certain amount of time, it disappears for good. If you fail a stage, you don’t get to keep any of that iridium you picked up. Additionally, there’s no way to go back and replay previous stages to earn more currency. This means, if you absolutely cannot beat a stage with the upgrades and iridium you have, then you will have no choice but to start over from scratch (and hopefully do better the next time around) or quit altogether. The difficulty does ramp up quite a bit in certain stages, especially those with bosses. 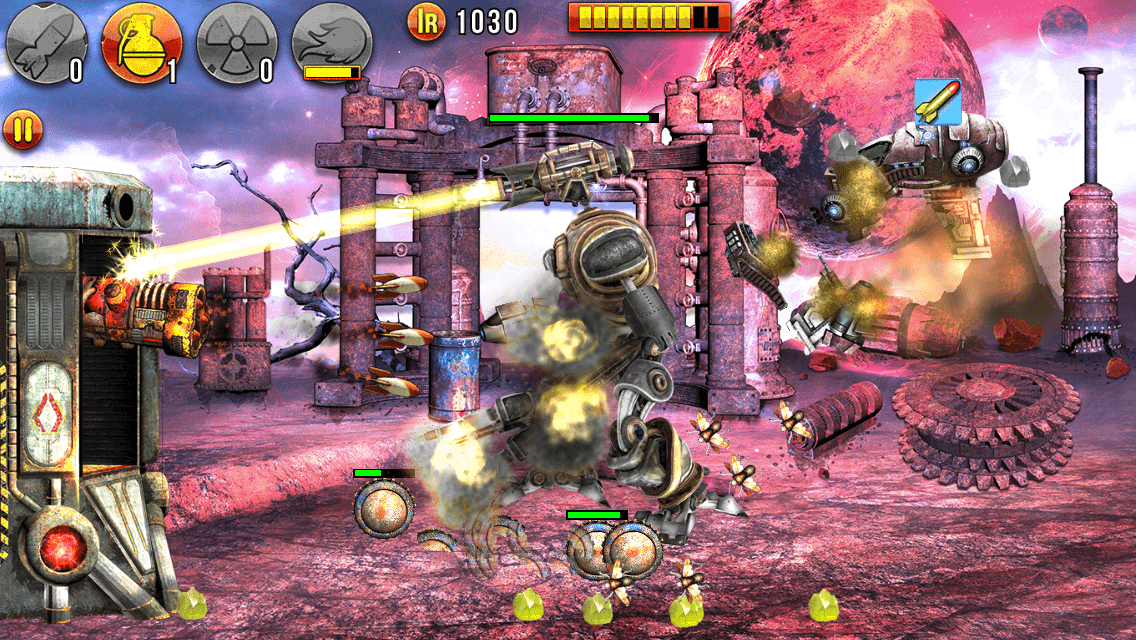 There is also only one save slot, so if you do want to try starting over, it means wiping your current progress. Two or three save slots would have made such a huge difference here, as it would mean you could try again without having to lose everything.

Since there are no in-app purchases (IAP) in the game (yay!), I can’t blame this design on greed and it can’t be called a paywall. I’m not really sure why these design choices were made. Perhaps the game is meant to appeal primarily to hardcore players. But personally, I would like to see some options that allow players from a wider range of skills to enjoy the game. The current game feels like an arcade hardcore mode. There might be room for a more casual mode that allows for grinding.

I did manage to complete the game once, but it took some persistence and retrying some of the stages several times. It’s possible it would have been less of a problem if I collected more iridium from the very beginning, but there’s something awkward and irritating about the way the iridium is collected, that I just wanted to ignore it. Often, tapping the iridium at the bottom of the screen would cause the guns to point down there, instead of at the enemies that were trying to kill me. If they were picked up in groups instead of individually, it would be a big improvement. As it is, you basically have to have one finger sliding across the screen at all times to pick up all the iridium. 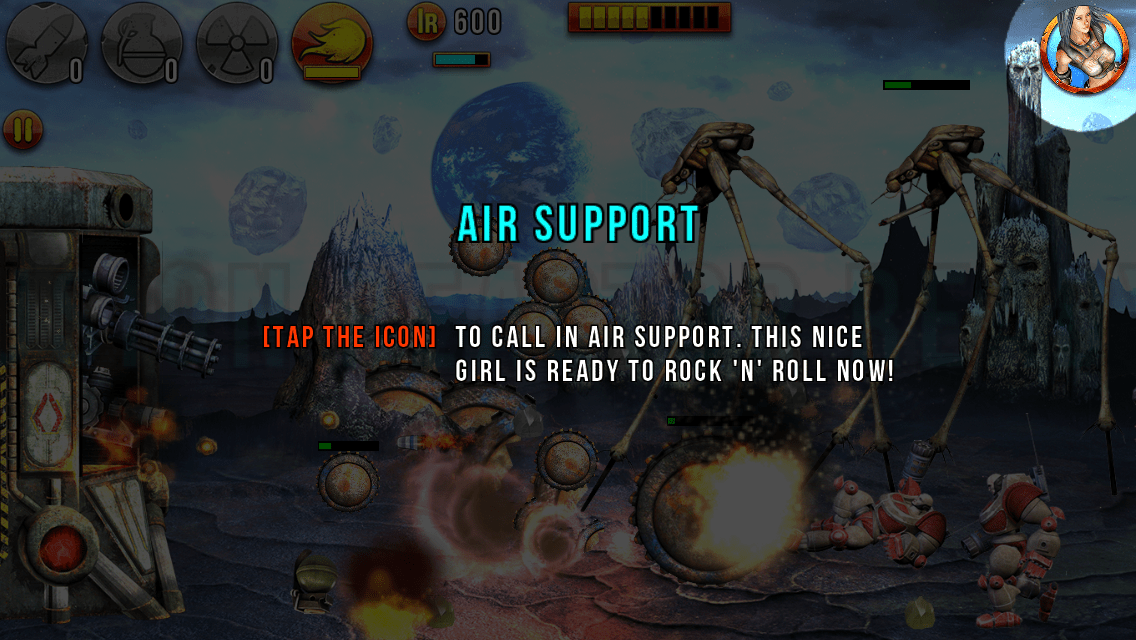 The developer said that the next update will bring Everyplay support with FaceCam live commentary. They are also integrating a reward system to earn iridium, and to resume a stage after a defeat. So perhaps this will help balance out the game for those who get stuck.

World of Khaos still has a lot to offer, especially if you like frantic games that keep you on your toes. The graphics and animations are impressive and vary throughout the game, as do the enemies and their attacks. There’s a lot of variety, so each stage felt very different to me. (Although, I should mention that at least some of the sprites seem to be copied from other games like Half-Life 2. See the image below.) Also, I’m guessing this is because of all the animations and sound effects, but the game takes up a whopping 1.2GB once installed. So keep this in mind if you’re short on space. Its large size will likely prevent me from keeping it on my iPhone long-term to try and beat my high score. 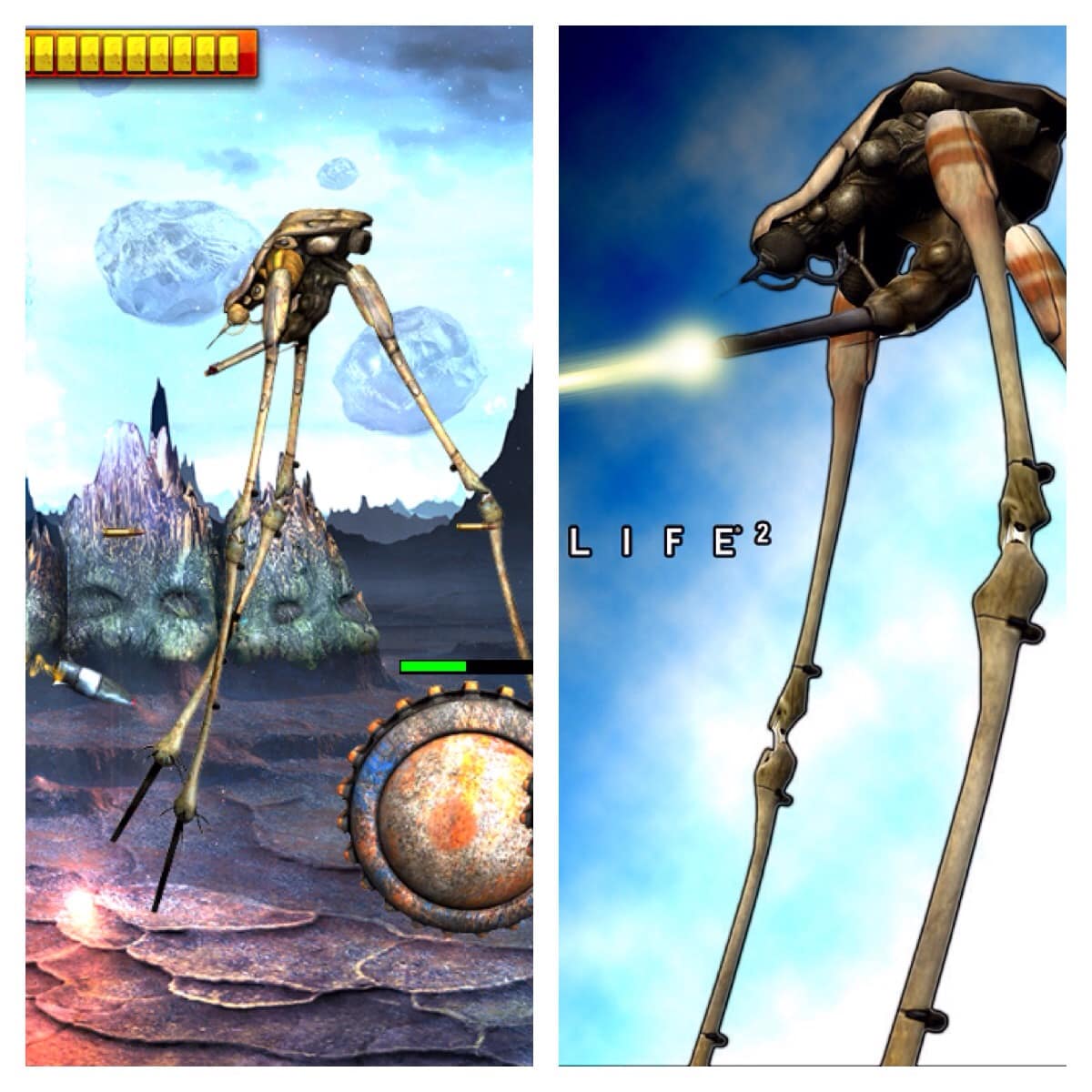 Overall, World of Khaos is a fast-paced, adrenaline-pumping and fun game. But there is definitely some room for improvement. If it sounds like something you’d enjoy, and you don’t mind the copied images, you can download the game here.[DKB url=”https://www.appunwrapper.com/Khaos” text=”Download” title=”” type=”” style=”” color=”green” width=”” opennewwindow=”” nofollow=””]

***Update: I played through the game a second time and it was much easier. I still find it annoying to pick up all the iridium, though.