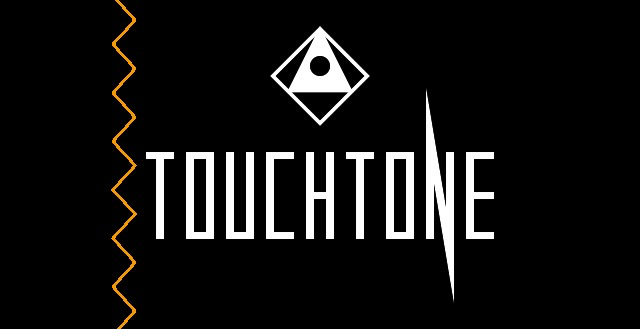 Long-time readers of my blog might already know that I’m a big fan of reflecting puzzles, especially when they’re done well and offer something unique. One of my favorite iOS games of all time is God of Light, a light-bending puzzle game tied up in a gorgeous package with a chill soundtrack. So when I heard of TouchTone and its similar puzzles, I was eager to play.

TouchTone is primarily a light reflecting game, but the puzzles are often much more mind-bending than in other games I’ve played. Levels consist of laser beams of up to three different colors. There are orange triangles, green circles and blue squares. You need to use mirrors, splitters, joiners and other tools to get each color to its receiving end. The twist here is that you can’t just move pieces around without thinking. The board is made up of a grid. If you want to move a piece, you slide an entire column or row or up or to the side. This means you need to be careful that when you move one piece into place, another piece isn’t moved from where you set it down. As you progress, puzzles will have more pieces to deal with, so you’ll have to really think things through before making any moves. This is both an interesting concept, adding challenge to puzzles that might otherwise seem easy, but also occasionally overly frustrating. If you do get stuck, there are no hints, but I’m working on a walkthrough to help out. 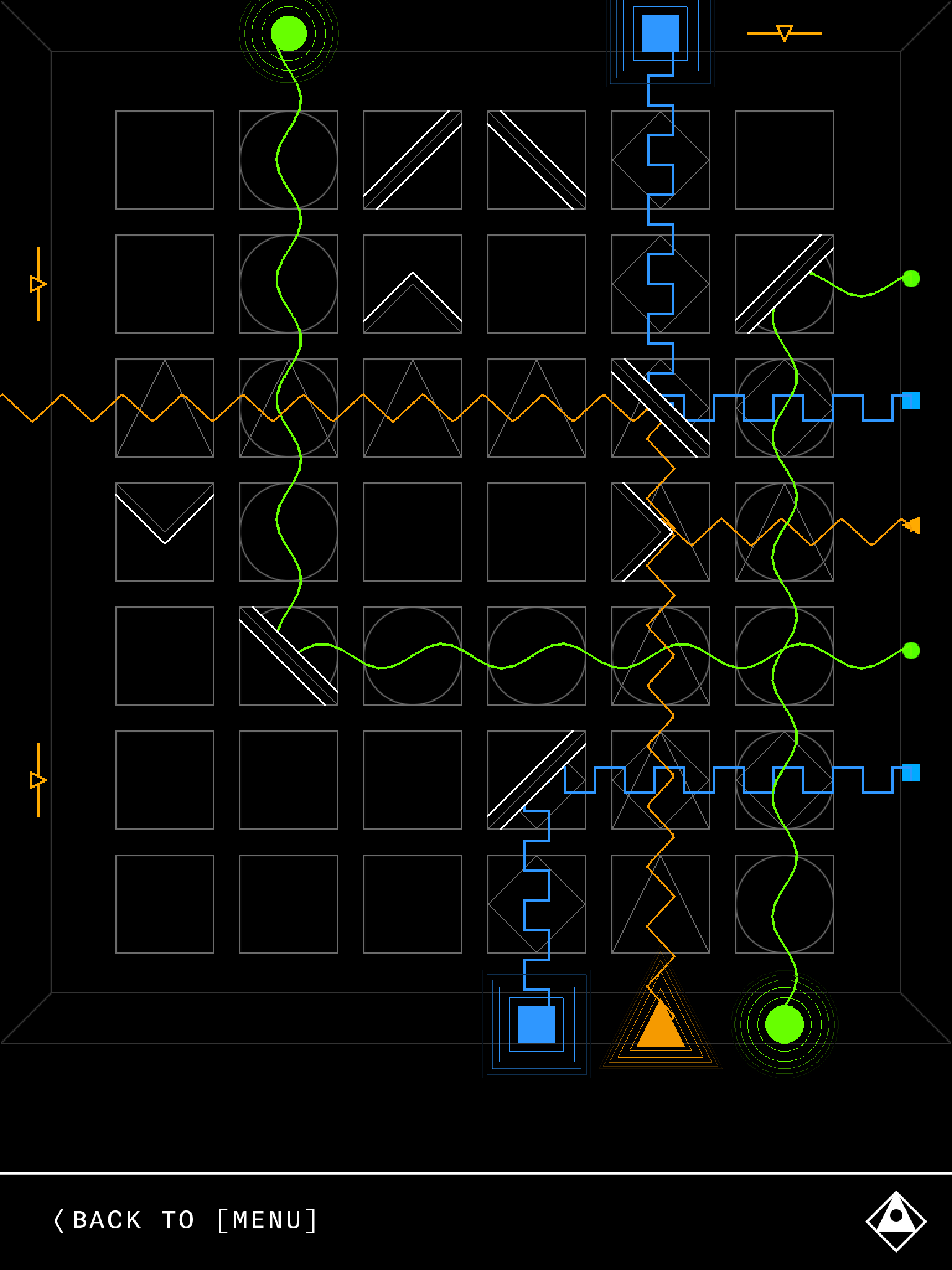 There are sometimes branches on the map that will allow you to choose between two puzzles at a time. But other that that, if you’re stuck on a level, you won’t be able to progress further until you solve it, as there’s no way to skip a level and come back to it later. This means some players might quit the game before completion. But if you want a game that will exercise your brain a bit, TouchTone is a pretty good bet. 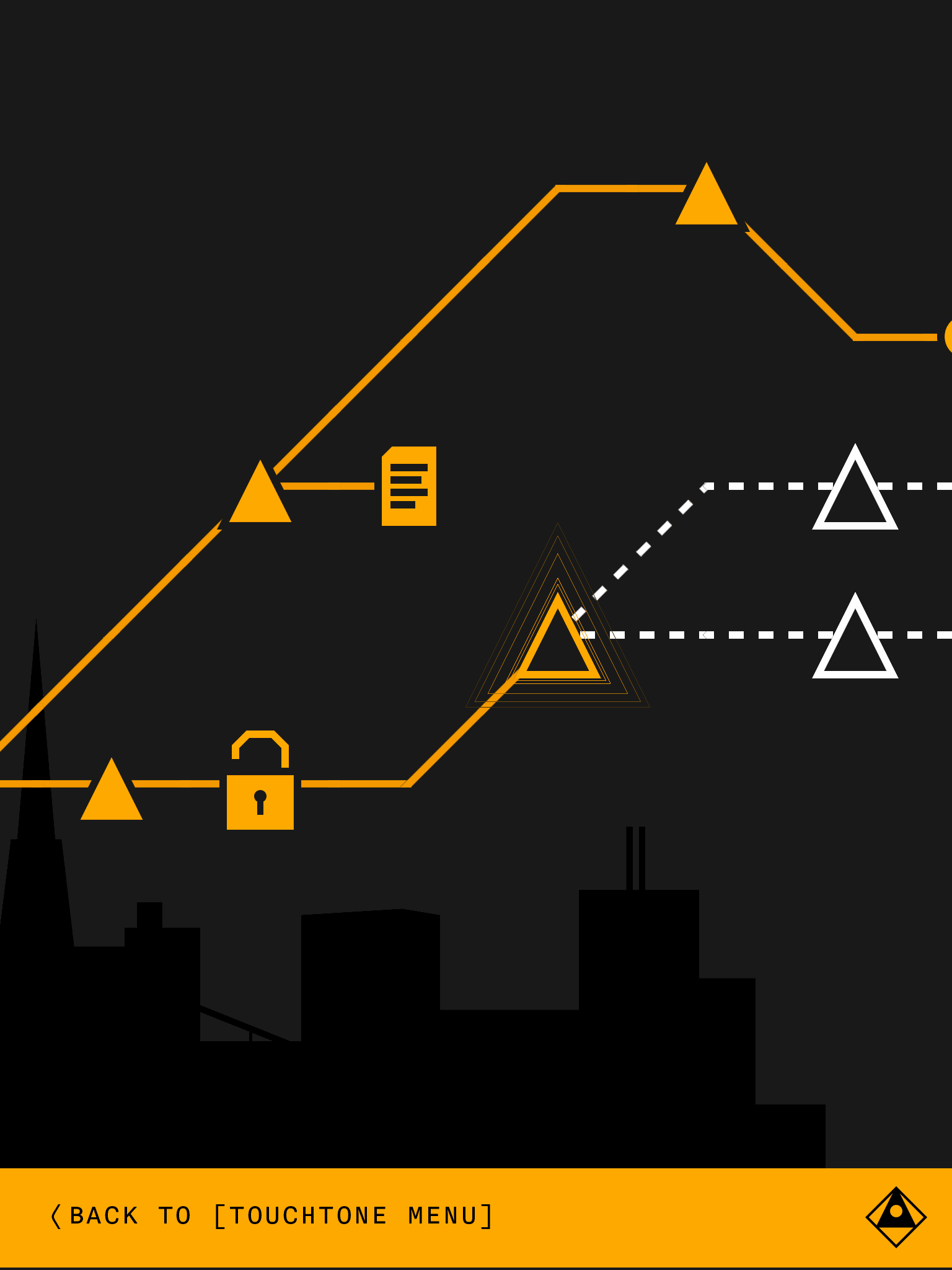 When you do complete some puzzles, you’ll unlock bits and pieces of a racially- and politically-charged story, in which you play sort of a rookie NSA agent listening in on people’s conversations and reading their text messages to determine if they might be considered a threat. This starts off really interesting, with you having to decide whether what you read makes a person sound dangerous. Your handler might have a different idea than you do of what kind of conversation warrants surveillance, and that’s where the game becomes both disturbingly realistic, but also somewhat humorous. However, once you get past the tutorial levels, you no longer have any choice, and you’re basically just watching the story unfold. I haven’t finished the game yet (I believe I’m around the halfway point), so I don’t know if later it changes back. I’m sure there’s a reason for doing it this way, as far as the game’s message goes. But I think it would have been more interesting if we kept the ability to choose.  I kind of wish the story was more interactive, perhaps consequences or branching story arcs for decisions you make. 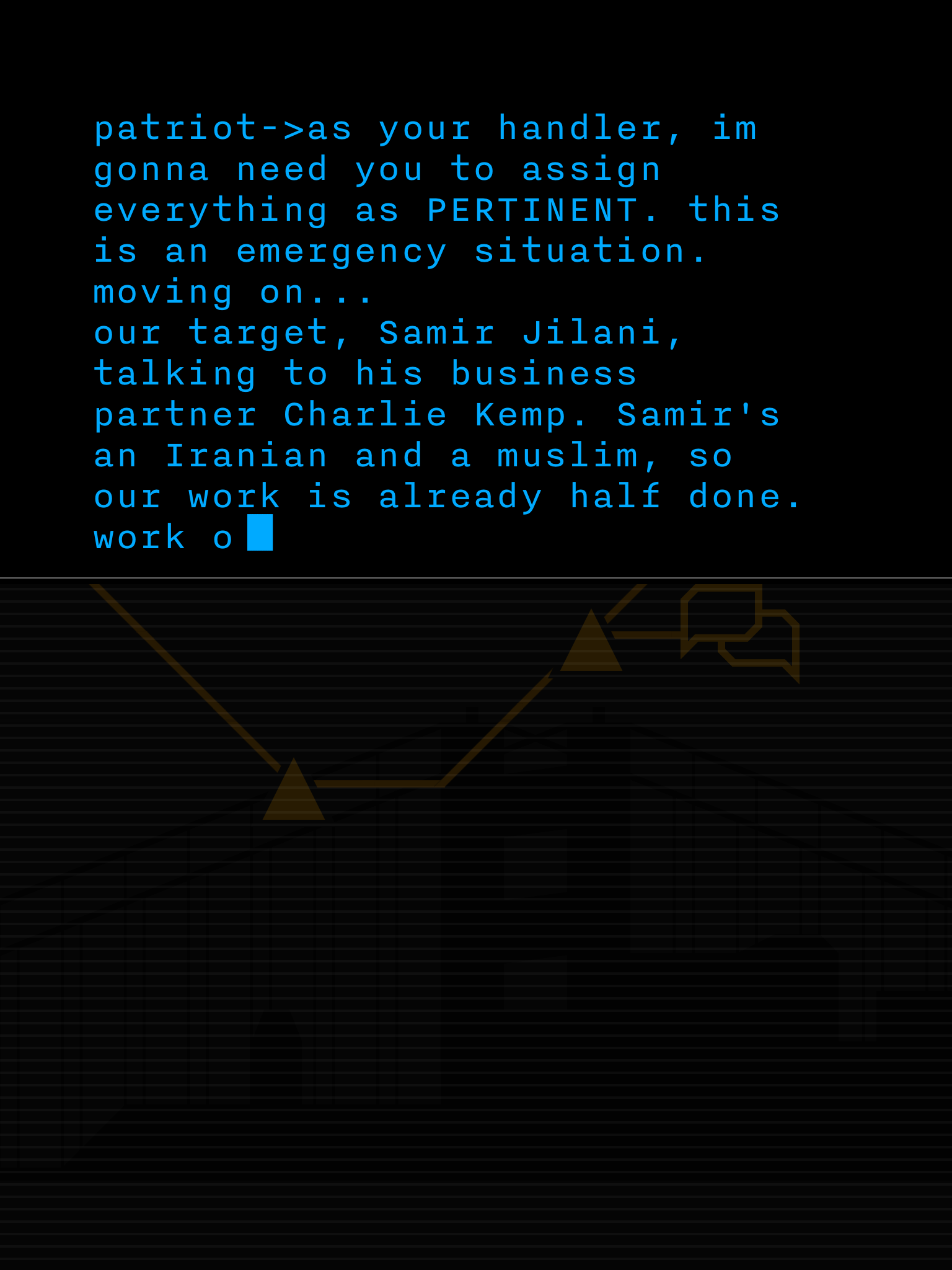 TouchTone is a game that’s perfect on both an iPhone and iPad, since the graphics are very minimalistic and the game can be played in bite-sized chunks or for hours at a time. Unfortunately, there’s no iCloud support, so you can’t play on your iPad at home and continue the same game on the go with your iPhone. I hope this is added in an update, as there have been many instances where I wanted to play on my iPhone while I was out, but didn’t feel like having to catch up to where I left off on my iPad. 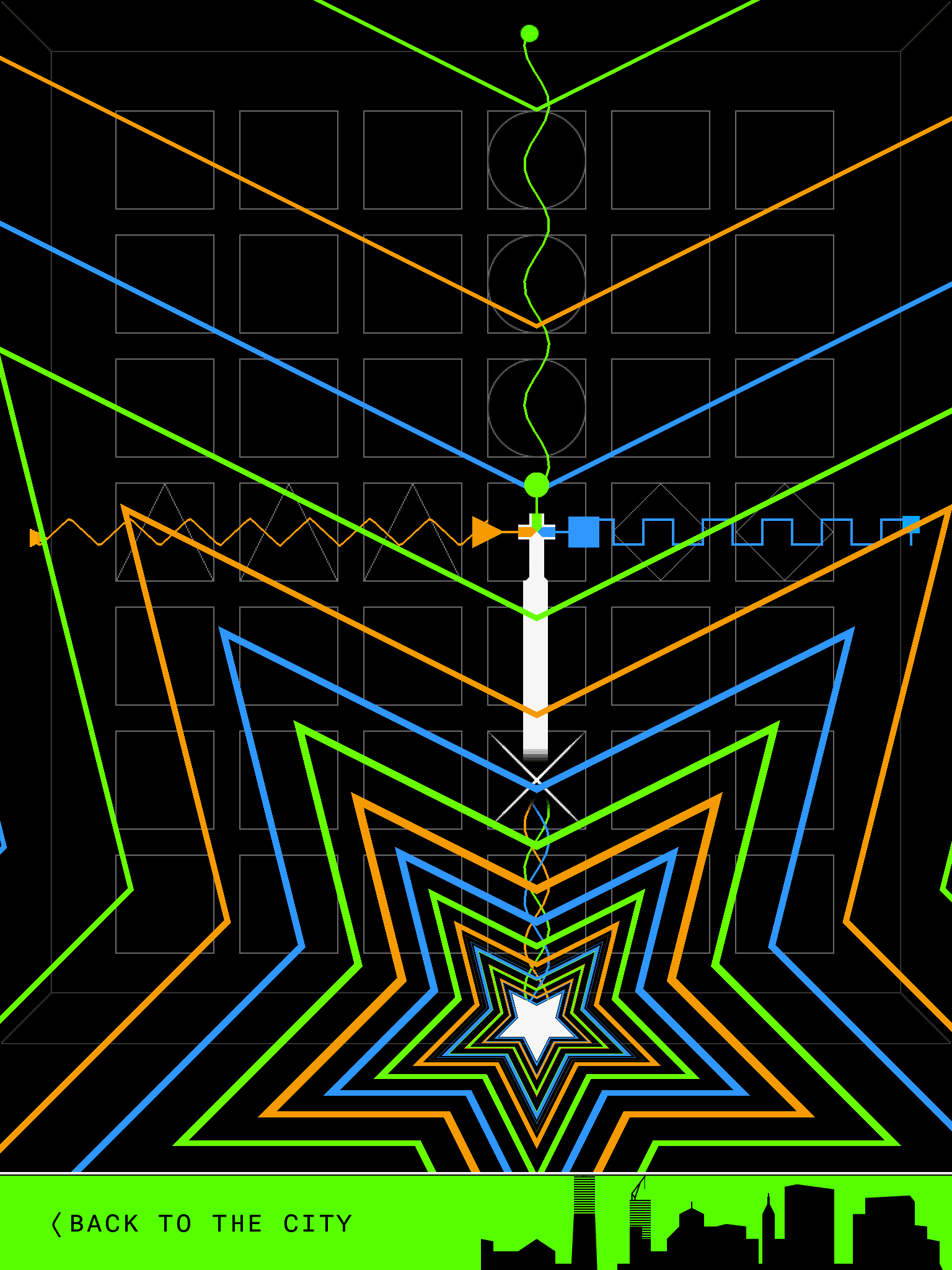 I also wish the game had a quick-save feature for when you’re in middle of a difficult puzzle. On several occasions, I accidentally touched the bottom of my screen while working on a puzzle, and it sent me back to the menu, forcing me to start the puzzle over. I would have preferred a pause button in the corner that could then take me back to the menu once prompted. I’ve also had a few crashes bringing the game back up after checking my mail or whatnot, so I would, once again, have to start the puzzle over. This resulted in my being afraid to leave the game once I had a large chunk of the board set in place. 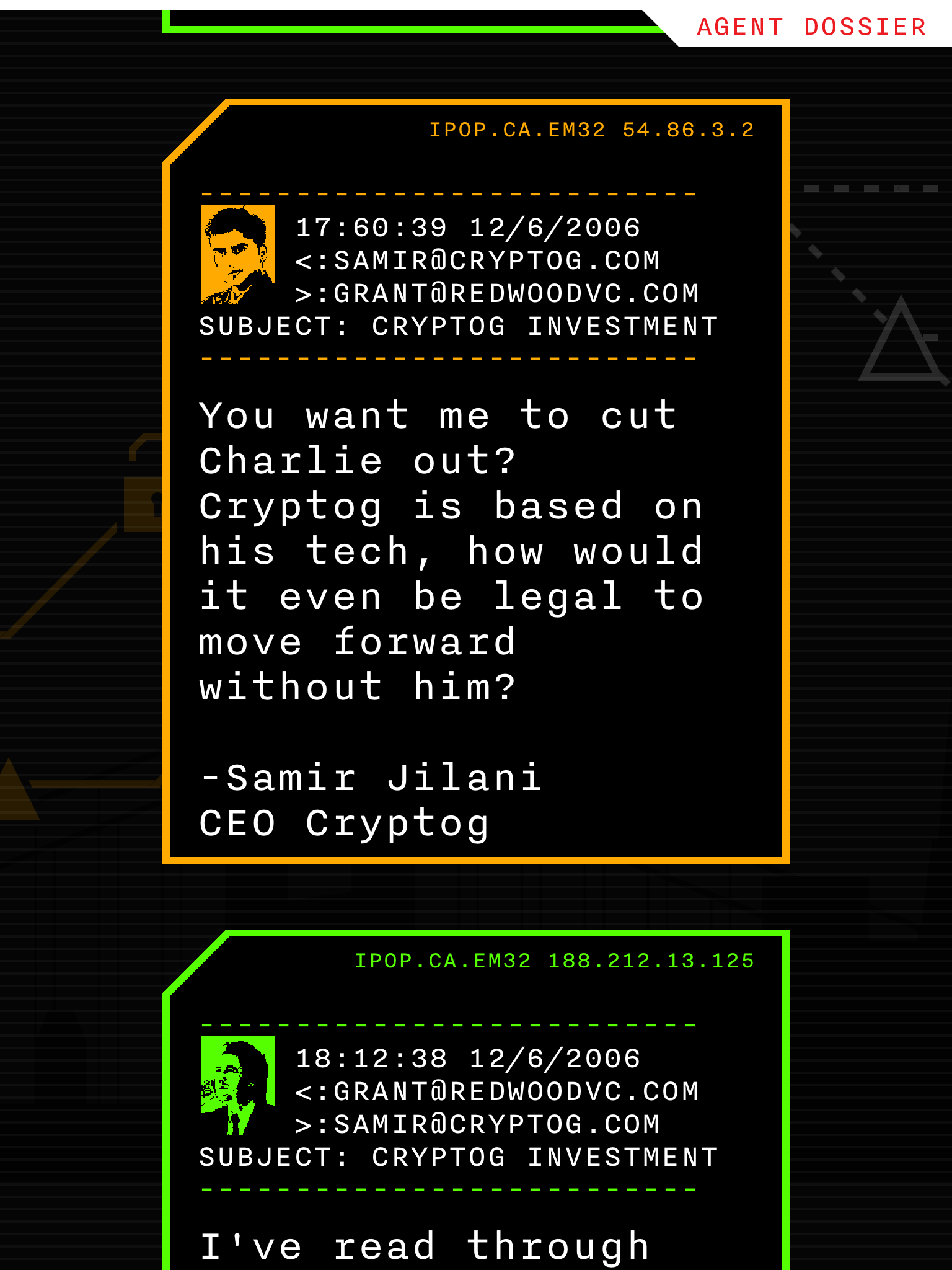 Overall, I’m really enjoying playing TouchTone. It could definitely use a few features and tweaks to make it more user-friendly, but if you’re looking for a tricky light-bending game with a unique story and message as a bonus, you should definitely check it out. As long as you stick with it, you should get more than your money’s worth, as it’s a fairly long game. If this all sounds good to you, you can download the game here.[DKB url=”https://www.appunwrapper.com/TouchTone” text=”Download” title=”” type=”” style=”” color=”green” width=”” opennewwindow=”” nofollow=””]

If you’re already playing the game and need some help, try my walkthrough.