Ryan North’s To Be Or Not To Be
By: Tin Man Games 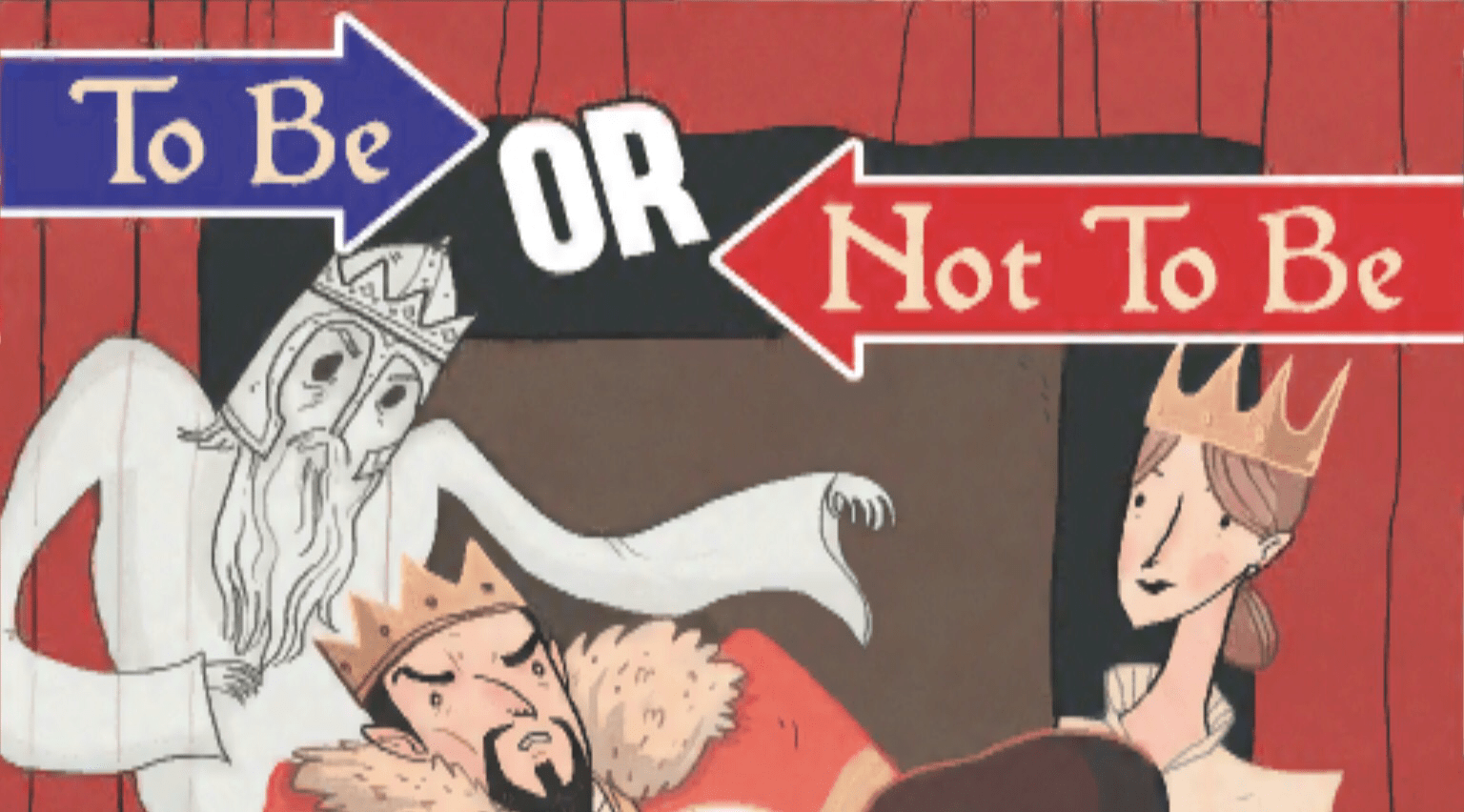 In my youth (god, I sound old), I used to consume every╬ô├╢┬╝Γö£├¡Choose Your Own Adventure╬ô├╢┬╝Γö£├¡book I could find. I was weird in that I liked seeing all the ways I could die. Somehow that was the best part. I mean, you could be eaten by a dinosaur, get mugged at gunpoint, sucked into a black hole — any number of things could happen to you. In order to see all possible endings, I would fold every page where I needed to make a choice, so I could go back to it when I died. It was a really safe way to go adventuring, and I couldn’t get enough of it.

Naturally, iOS devices lend themselves well to interactive novels, but I personally have not been able to get into too many of them. I tried some TellTale Games, like╬ô├╢┬╝Γö£├¡The Wolf Among Us, but I got too stressed out over the choices and not being able to go back and change them. I tried some gamebooks, but they felt too serious to me and didn’t grab my attention. I also didn’t really like the game part of the gamebooks. In short, I haven’t found too many interactive novels on iOS (yet) that give me that same experience I got from╬ô├╢┬╝Γö£├¡Choose Your Own Adventures as a kid. 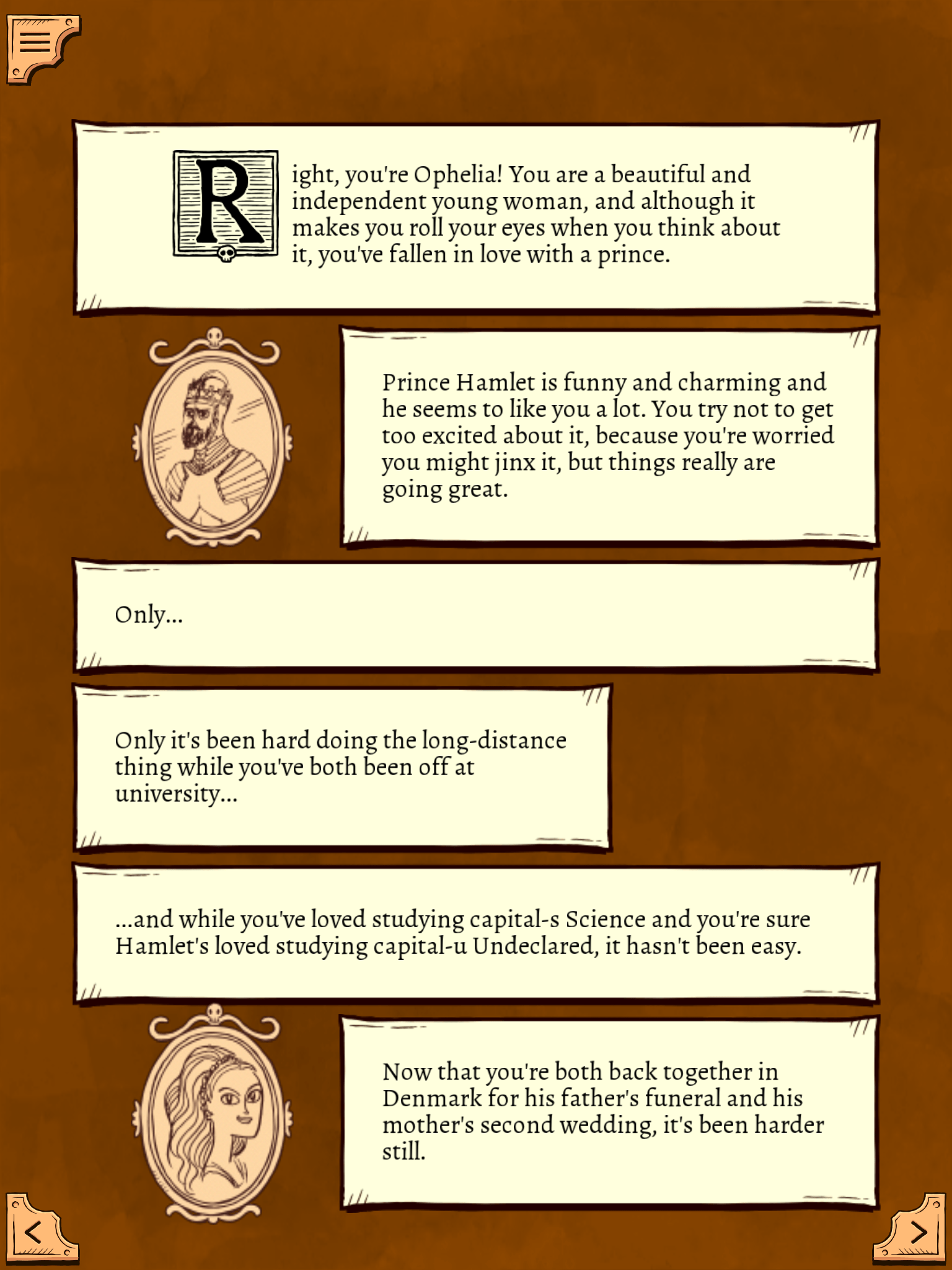 Ryan North’s To Be Or Not To Be by Tin Man Games is just such a game. Instead of playing yourself going on adventures, you get to choose between three main characters from Shakespeare’s Hamlet. There’s Ophelia, the smart, confident science nerd, emo Hamlet, and then Hamlet Sr. (yes, the ghost). I haven’t been eaten by any dinosaurs yet, but I’m not ruling it out as a possibility. So far, I’ve been killed numerous times, as well as murdered a whole bunch of people. It’s Shakespeare, so death is to be expected!

The story still follows the plot of Hamlet, however loosely. For those who need a refresher, Hamlet’s father is killed by his uncle Claudius, who then marries Hamlet’s mother and becomes king. Then, Hamlet’s father, as a ghost, visits Hamlet and tells him to avenge his death. And that’s basically what your mission in this game is, except you get sidetracked very easily. I do find the game to be the most fun when I’m being reckless and choosing he craziest choices. Sure, you can make wise decisions to get “better” endings, but turning into a futuristic space ghost is more fun than getting proper revenge. It’s especially entertaining when the narrator calls you an idiot for your choices. 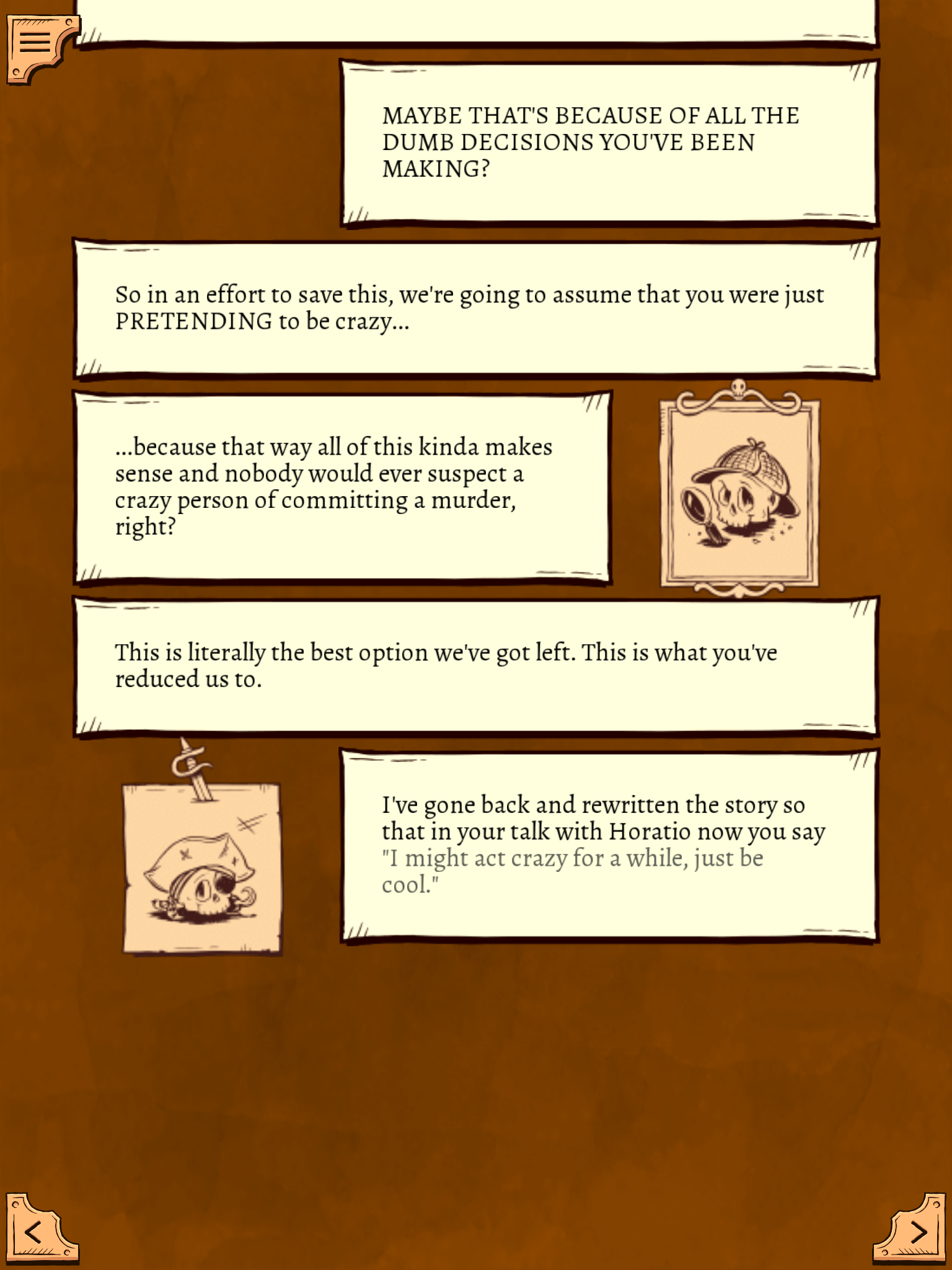 Whichever character you choose, you’ll get a very different story, even though it’s all based on Hamlet. In Ophelia’s story, Hamlet is more ditzy than emo and in Hamlet’s story, Ophelia plays a much smaller part than she does in her own. This means you’re not just reliving the same story as different characters, so it’s worth playing as all of them. Personally, I like Ophelia’s the best, but they’re all fun to read.

The humor is irreverent and completely off the walls, and that’s what makes it so much fun. If you take your Shakespeare seriously, this probably isn’t for you. But if you want to experience the story of Hamlet (or at least a story loosely based on╬ô├╢┬╝Γö£├¡Hamlet) from the point of view of a geeky Ophelia or a scatter-brained prince, you should get plenty of enjoyment from it. 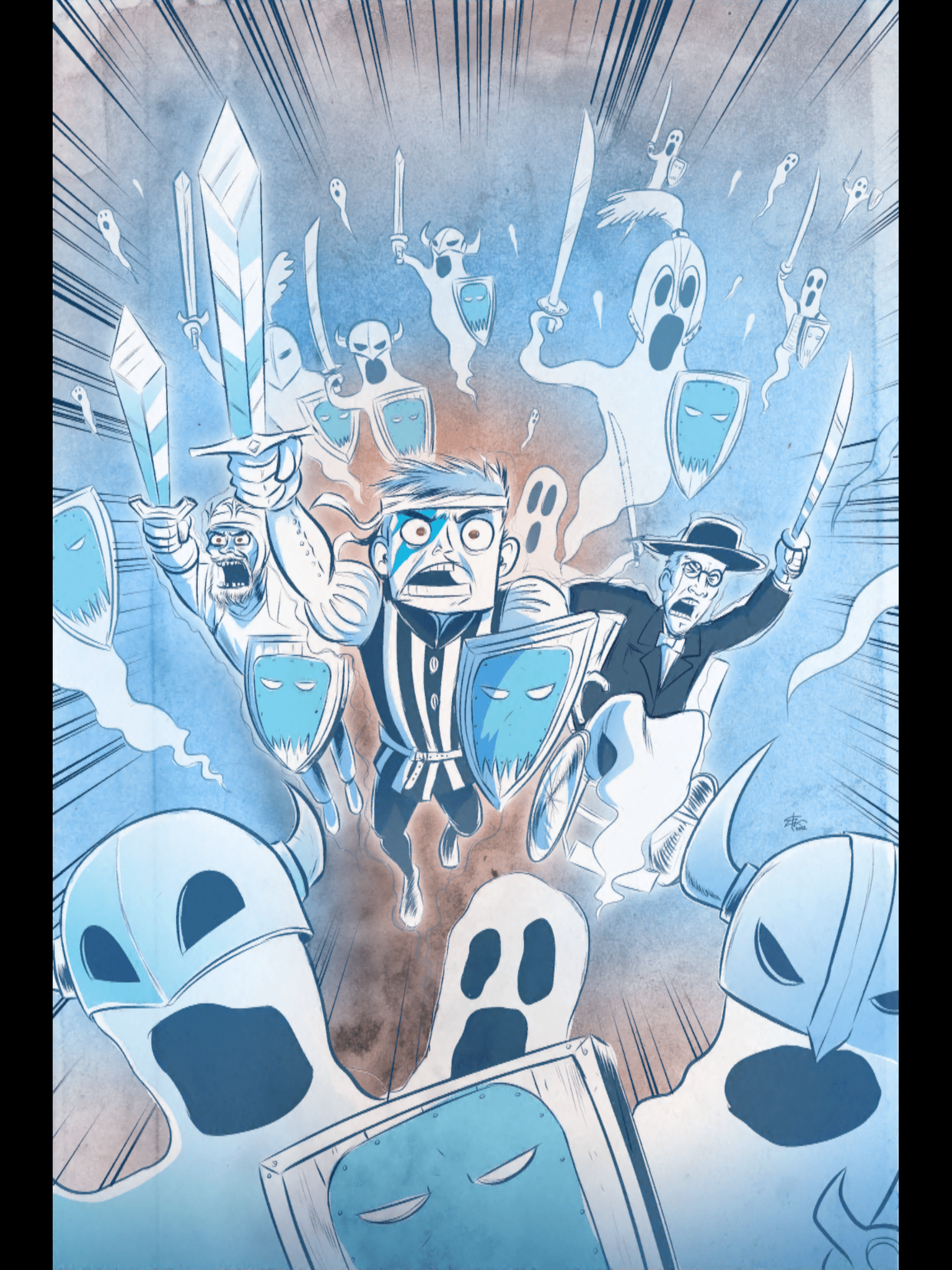 Even though the game has checkpoints, it doesn’t have nearly as many as you would get simply folding the corners of a book. But there is a one-tap fast-forward that works about just as well. If you don’t want to re-read parts you’ve already experienced, just press the fast-forward button once to zoom through to the next choice. This works backwards, as well, if you decide you don’t like the choice you just made and want to try another one. Basically, it’s about as close as you can get to folded corners without having a huge checklist of checkpoints to choose from. The game runs smoothly and scrolling back and forth through pages is quick and painless, so this is a perfectly good way of doing it. It certainly takes the stress out of making choices! 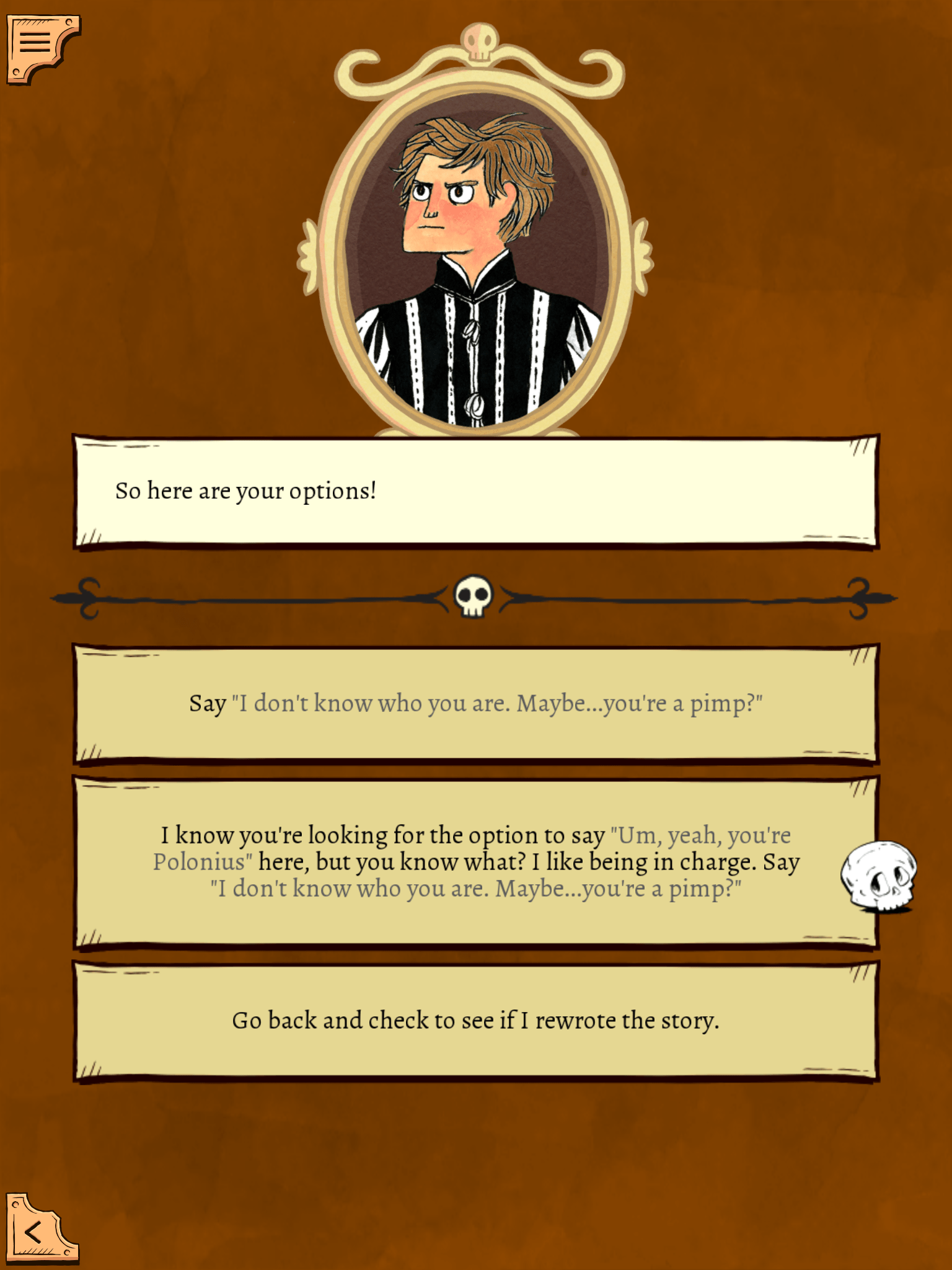 You’ll also unlock achievements, although, sadly, they’re only visible inside the game, so you can’t show them off in GameCenter. There’s also lots of unlock-able artwork, which is both fun to collect and also gives you a way to gauge how much of the possible outcomes you’ve seen. There are quite a few endings, based on the number of achievements and pieces of artwork I’ve yet to collect. I don’t know if I’ll ever read them all, as it does eventually get tiresome to go back and read all the branching storylines. But you should be able to get several hours of entertainment out of it before it starts to gets old. Completionists will get quite a few more hours out of it if they want to see every ending and collect every achievement and piece of artwork. There is a lot of content here.

If you’re still undecided, you can watch this video I made of the first few minutes of Ophelia’s story to get a better idea of the tone:

If you’re looking for a humorous, entertaining and stress-free interactive novel, I highly recommend Ryan North’s To Be Or Not To Be. If it sounds like something you’d like, give it a try and download it here.[DKB url=”https://www.appunwrapper.com/ToBeOrNot” text=”Download” title=”” type=”” style=”” color=”green” width=”” opennewwindow=”” nofollow=””]

Tags: android, hamlet, iOS, iPad, iPhone, iPod, ophelia, To Be Or Not To Be