I haven’t played too many hack-n-slash games in quite some time. I used to love Gameloft’s Dungeon Hunter series before it went free with in-app-purchases (IAP). The last game I can think of was Godfire: Rise of Prometheus by Vivid Games, which I had really high hopes for. But it was a premium-priced game hampered by tons of IAPs and no way to grind for more currency. I don’t have much patience for games like that, so I avoid most “freemium” dungeon crawlers altogether. Then along came Implosion – Never Lose Hope by Rayark Inc.

Implosion is a proper premium game that you pay for once and never get asked for money again. There is only one currency and you can grind for more of it — as well as experience and loot — to your heart’s content. This is great news for those who aren’t used to these games or aren’t necessarily that skilled with them, but still enjoy the hack-n-slash experience. There are also limited revives for each level, which allows almost anyone to complete the game. Using a revive lowers your score, so if you don’t care about that, it’s a perfectly acceptable way to get through the game. I like that the developers included plenty of ways for both casual and hardcore players to get the most out of the game. Because, let’s be honest — no one wants to spend $10 on a game and then quit a quarter into it. For those who find the game too easy and want even more of a challenge, there’s an expert mode to play through once you complete the story the first time. 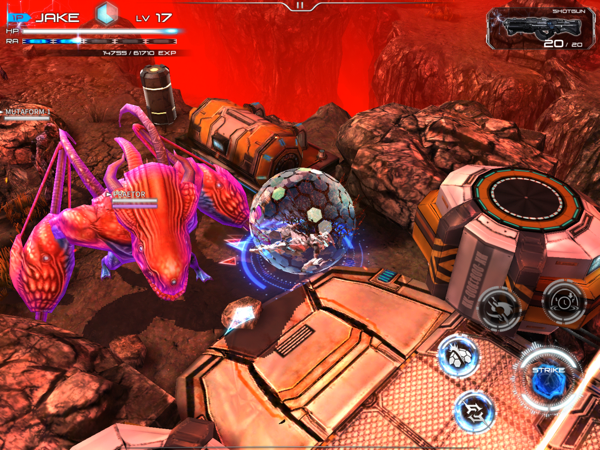 In Implosion, you take on the role of Jake — or at least his war mech, Avalon, that he’s hooked up to. Jake has a mind-link to this kick-ass robot, but he’s not in the suit himself. You move Avalon using a joystick that appears anywhere on the left side of the screen where you place your thumb. The right side houses the “strike” button which, when tapped, causes Avalon to slash his lightning-fast sword that is just a blast to watch. If you time your taps right, you can work out combos of light and heavy attacks for more damage. There is also an evade button to the left of the strike button, which makes Avalon dash in the direction he’s facing. It makes him invincible for about a second, so it will quickly become your best friend. The last three buttons are for Avalon’s special abilities. These require energy that you build up by performing basic attacks and they vary based on the equipment you’re wearing. 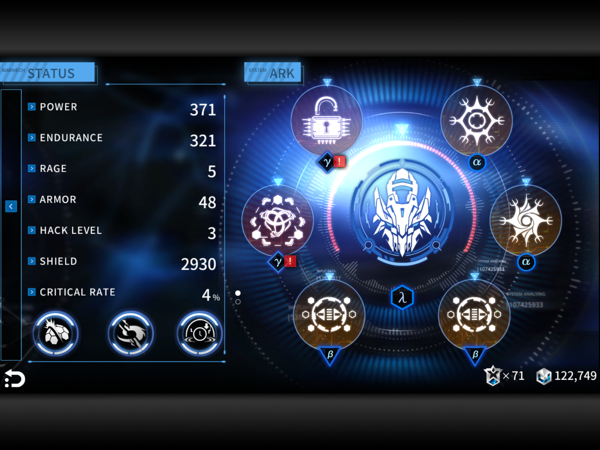 Avalon also has a gun, which can be fired by sliding the strike button in the direction you want to shoot. It has limited ammo that replenishes after a short amount of time, but you need to use it wisely. There are also more powerful guns lying around with a few shots each. These range from rocket launchers to shotguns to lasers and they all pack a punch. Sometimes they can mean the difference between life and death. 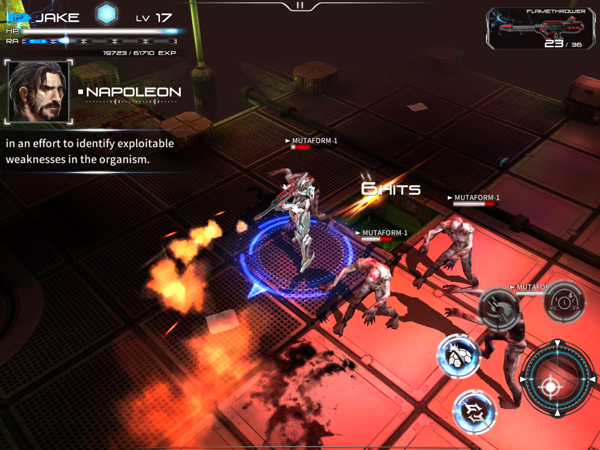 The game features gorgeous visuals and smooth action that never lagged even on my old iPhone 5. There’s a lot of variety to the enemies and the environments and they all look amazing. I love the way some of the zombie-like creatures called Xada play dead until you walk up to them, at which point they’ll rise up like someone possessed by a demon. There’s a lot of attention to detail, which you should appreciate even if you’re too busy fighting for your life. But besides the gorgeous visuals and hack-n-slash fun, there’s a lot of depth to the game. Early on you can get away with just mashing buttons, but eventually you’ll have to learn to play more strategically. 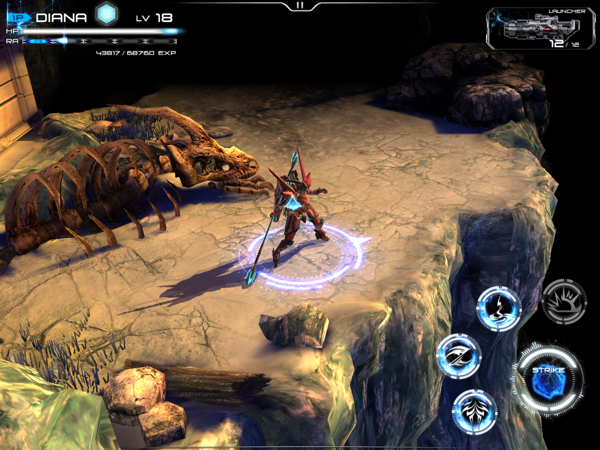 The game is broken up into four chapters of eight to ten missions (or levels) each. Each mission takes a few minutes to run through and you’ll be able to earn experience, as well as loot equipment and credits (the game’s currency). At the end of each chapter is a boss battle and they’re each unique and challenging, requiring different strategies. For most of the game, I stuck to my guns and refused to use a revive. But in the third and fourth chapters, I gave in and started using them. The difficulty ramps up quite a bit in the last chapter. I used up all five revives on a couple of missions in order to complete the game without having to grind for another few days. 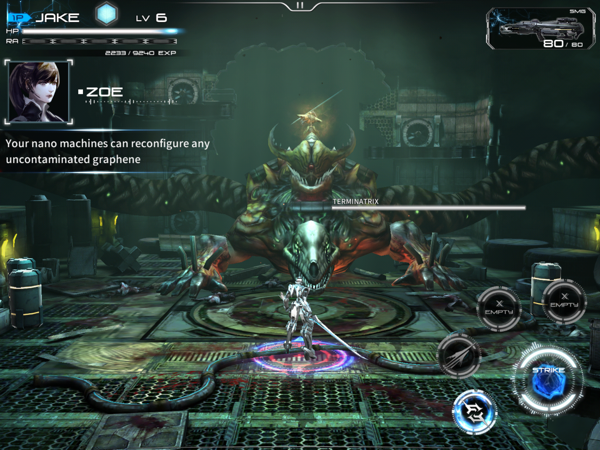 Another nice touch that adds a lot of replay value to the game is the badge system. For each mission, there’s a number of badges you can earn by meeting certain conditions. This could mean breaking all containers in the level or taking zero damage. Each level can also be played in hard mode for more challenge, better equipment, as well as the ability to earn more badges.

The badges can then be traded in for rewards, including a second playable character that’s female and wields a staff instead of a sword. She also has different special attacks, so you get a completely different experience playing with her. Even the dialogue is different when you take her into battle instead of Avalon. I do have a bit of a gripe with the badge rewards, though. They’re not all that impressive early on, despite the great effort invested in earning them. But once you unlock the second character, they really start to improve. It would have been nice if every single reward was worth the effort to get those badges. Often it just felt underwhelming when I was able to collect a new reward. The store is also a bit disappointing. You earn a lot of credits, but most of what you can buy is weaker than what you can loot. Occasionally there’s something really nice to buy, but it’s rare. 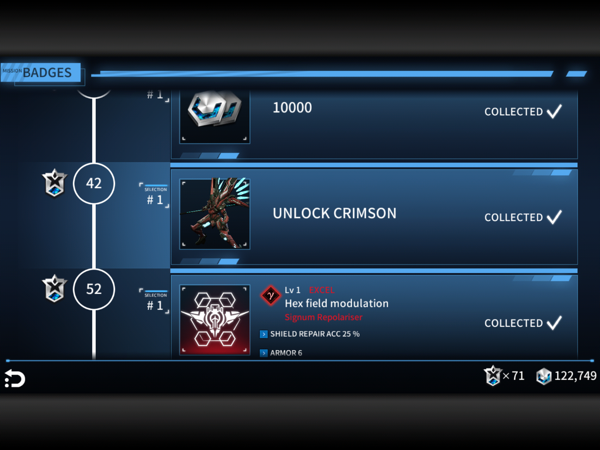 My main complaint about the game is that stats are not explained well. It’s hard to decide on a build for your character if you don’t know exactly what everything does. The inventory also could use a bit more organization. Some descriptions for badge requirements could also be clearer, as sometimes they’ll say “zero damage sustained” but really mean “zero hits taken,” as having the shield protect you from damage doesn’t get the badge. There’s also a lot of typos and grammar mistakes in the game, but they don’t detract much from the experience. 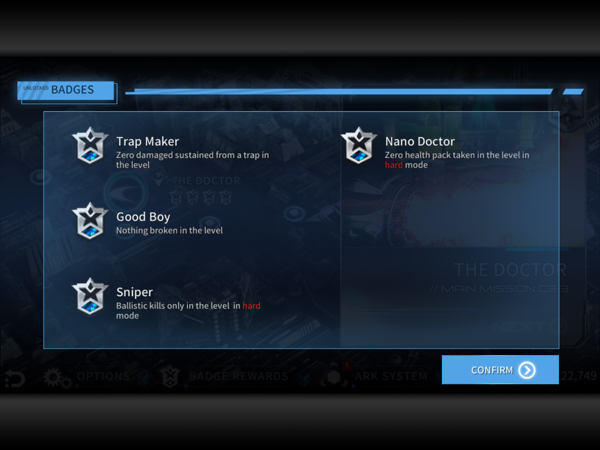 A huge plus for me was that Implosion utilizes iCloud, which is great news for anyone with two iDevices. You can play on your iPad at home and continue where you left off on your iPhone on the train. It’s slightly inconvenient in that you have to complete the first mission on a device before you can access the options (including iCloud). So if you delete the game, you’re going to have to play the first mission again before accessing your save. But it’s a really small inconvenience for iCloud backups that otherwise work flawlessly. Not too many developers utilize iCloud, so I’m really grateful when one does, especially with a game that plays so well on different devices. Missions usually only take a few minutes, so the game is perfect for both on-the-go or at home on the couch. There are no quick-saves within a mission, though, so you want to make sure that you complete a level before closing the game. 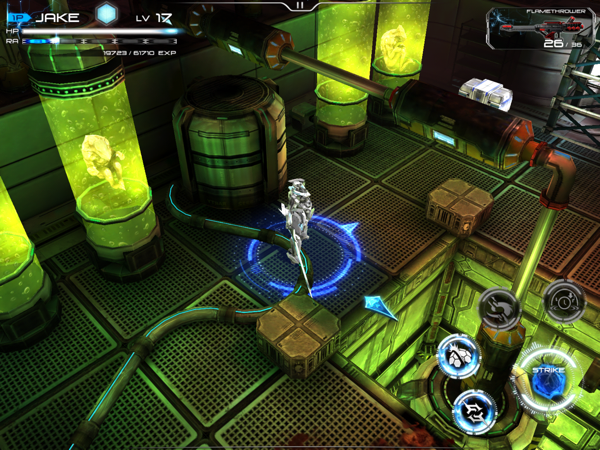 While the game certainly looks better and runs a bit smoother on my iPad Air 2, I found myself sometimes preferring to play on my iPhone 5. It felt a bit awkward to me to hold the corners of my iPad, and it affected my gameplay. I had much better precision playing on the smaller device. But if I wasn’t particularly worried about precision, I would break out the iPad for the gorgeous visuals. However, the game is certainly playable on both large and small screens.

The story didn’t particularly grab me. I often found myself spacing out during the dialogue or even sometimes fast-forwarding it to get to the action. There was just so much of it and it felt forced at times. Although, it is nice that it’s voice acted and the bosses sound perfectly creepy. The ending is also confusing, but perhaps that’s intentional to keep the option open for more content or a sequel. But whether you enjoy the story or not, the game allows you to skip cutscenes and fast-forward through most dialogue, so you can skip right to the action if you want.

Overall, Implosion – Never Lose Hope is a high quality, gorgeous and layered hack-n-slash that’s a must-have for any fans of the genre. If you’re sick of similar games with timers and three different currencies, Implosion will feel like a breath of fresh air. It’s also quite a long game. It took me over twenty hours to complete the game once, but that included some grinding and earning over seventy badges. I plan to work on getting more, but at a more relaxed pace. The game lends itself well to playing at your own leisure whenever you have a few minutes here and there to spare. It’s really the perfect console-quality mobile game.

If this all sounds good to you, go give Implosion a try and download it here. [DKB url=”https://www.appunwrapper.com/Implosion” text=”Download” title=”” type=”” style=”” color=”green” width=”” opennewwindow=”” nofollow=””]