I really, really wanted to like Forgotten Memories: Alternate Realities by Psychoz Interactive. While the survival horror game was in development for six years, I admit I was not paying attention to it the whole time. But I did look in every now and then over the last few months to see how it was coming along. From the screenshots and videos I saw, I was really excited to play. It boasted graphics that push the limits of iDevices and there were creepy mannequins. What’s not to love, right? Well, as it turns out, quite a bit.

First, the good. The game definitely delivers on its gorgeous graphics and creepy atmosphere. The mannequins look great, and there’s no shortage of them. While the main character, Rose Hawkins, looks a bit odd in the face, you don’t see it that often, so it’s not a big deal. On my iPad Air 2, the dynamic lighting looks amazing and you can even see steam coming out of Rose’s mouth when she breathes. The voice acting is top notch and the music and sound effects perfectly capture the survival horror vibe. I also absolutely love the title screen and wouldn’t mind having a poster of it up on my wall. Unfortunately, I found the game far too frustrating to fully enjoy these things. 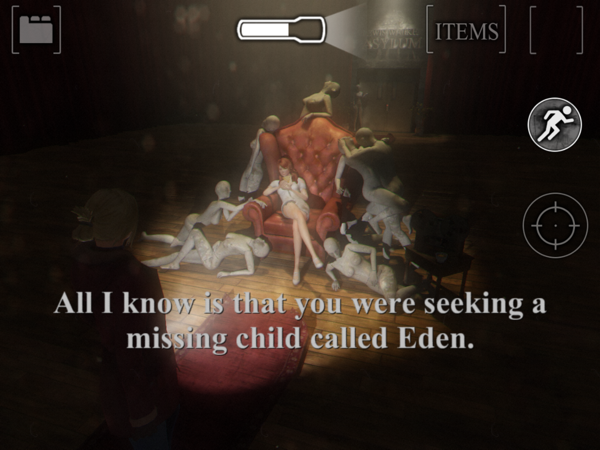 While the visuals certainly are impressive, the lighting makes it hard to see much of it. Pair that with the fact that it’s in third person and your character often blocks your view, and you have a gorgeous game that you can barely see. This is a bit less of an issue on a bigger screen, so I highly suggest playing on an iPad if you have one, instead of an iPhone. Playing in the dark also helps minimize the lighting problems but not the camera ones. If you have two devices or limited space in your device, keep in mind that Forgotten Memories has no iCloud enabled. So there is no way to transfer a game from one device to another. My most recent game is on my iPhone and I would like to play on my iPad instead. I tried transferring the save data using iExplorer, but my iPad didn’t recognize the save data and only gave me the option to start a new game. If you do get the game, choose wisely which device to start playing on. If iCloud is very important to you, the developer did say that they have it planned for one of the updates. So that’s good news.

The game was originally meant to be very unforgiving. The developer advertised it as old-school survival horror with inspiration from games like Silent Hill and Resident Evil. Part of said inspiration was a save system that involved finding a limited number of floppy disks and then finding a computer to use with the disk. This meant you could go a half hour or more without saving and potentially lose your progress.

The game also had a flashlight with a battery that dies after a short time. There were charging stations scattered around (apparently that’s a thing), but they were hard to find. I ended up losing twenty minutes of progress on my first game because I got stuck in pitch black and couldn’t do anything. It’s not like in a real haunted house where you could feel your way around. If you can’t see anything in the game, there’s not much to do other than give up and start back at your last save point.

While the developer originally said he wanted the game to be hardcore and had no intentions of changing anything, he eventually decided to add an easy mode that includes unlimited flashlight battery and does away with the floppy disks so you can save as many times as you want as long as you find a computer. This was a huge improvement, and I was eager to try the game again with these changes. So I updated the game and started fresh on Easy mode. Things went pretty well for a while. I made more progress and was enjoying myself more now that I could see a little better. 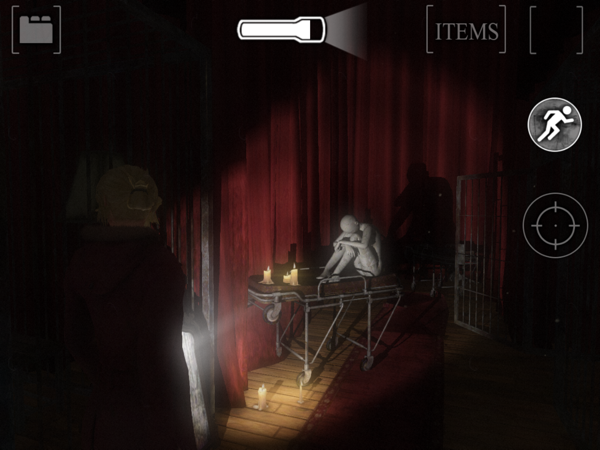 But the controls are still an issue. You move Rose using the invisible joystick on the left side of the screen. The right side controls the camera, which is attached to the flashlight. But it can be awkward to get all three to work the way you want. I’d sometimes end up with the camera facing Rose or with her just blocking my whole view. The flashlight also doesn’t work if you get too close to things, so the unlimited battery only takes you so far. It can be especially troublesome during battle.

I also had a big issue with the item interactions. When there’s something of interest, an exclamation point will pop up as you get close to it. If you tap the exclamation point, you get a description of the item or pick it up if it’s something you can use, like a medical pack. But these exclamation points are too fleeting. While it was more of an issue on Normal mode with the limited flashlight battery, I still found it to be a big problem on Easy mode. I would waste a lot of time trying to line up perfectly with an exclamation point that I had just passed, only to find out that it was nothing important. This made me less willing to explore every nook and cranny to interact with everything I possibly could. And so, I missed the first gun and who knows what else. 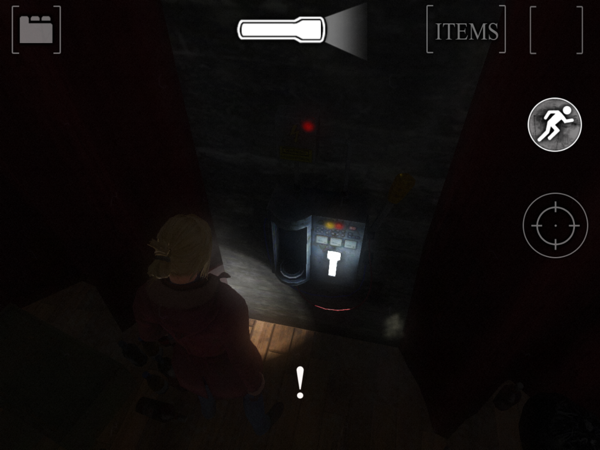 Additionally, the game still has no map, even though there was one available during the beta testing. The game is disorienting and it’s easy to get lost. A map that unfolds as you explore more of your surroundings would have been a great way to keep track of where you are, as well as all the computers and other important areas, without handing the player everything from the very beginning. Without a map, I found it very easy to get lost, even when just trying to get back to a room I’d already been in. So much of the surroundings look the same, that it’s easy to walk through the wrong doorway and re-encounter the two enemies you thought you had just killed.

Speaking of enemies, let’s talk a little about the combat system. The weapons in the game vary from a pipe for melee combat to different types of guns with limited ammo. I never found any guns, so my only weapon was the pipe. To use it, you equip it from your items menu and then tap the little crosshair to enter combat mode. You then tap the screen to make Rose swing the pipe. If the pipe makes contact, it harms the enemy a bit. Both on normal mode and easy mode, the very first enemy I encountered in the game took about ten hits from my pipe for them to go down. There’s a “combo” when you tap three times quickly, but since the first two hits push the enemy away, my third swing rarely ever made contact and instead ended up hitting air. So Rose awkwardly throws her whole body forward, tiring herself out for nothing.

Rose has very little stamina, so she starts huffing and puffing after a couple of swings of her pipe. She also moves incredibly slowly while her weapon is active, so good luck trying to move in any direction faster than your enemies. As a woman with a gym membership solely for weightlifting, I actually found this a bit insulting. This is an investigator we’re talking about here, not some frail waif. Why is she so inept in battle? Why does she have so much trouble swinging a pipe?

On top of that, the enemies have no health bar, so it’s impossible to tell what kind of damage you’re doing to them. Your character does have a health bar, but it’s hidden in the items menu, which does not pause the game if you open it to look at it. So the only way to check if you’re low on health is to put yourself at risk of losing more health. 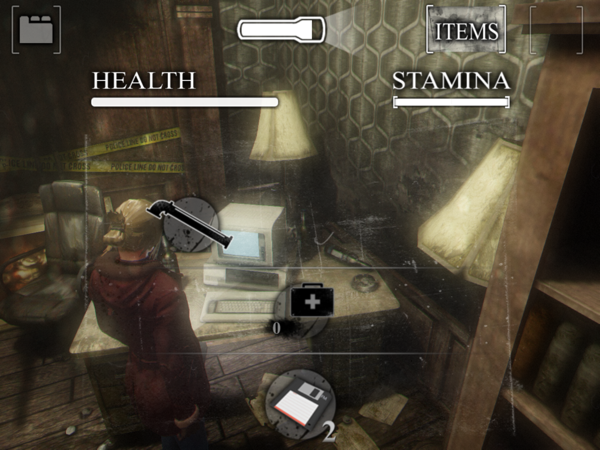 Still, despite all this, I was able to take one enemy down at a time both on easy and normal difficulty modes. The problem is when there’s more than one. It’s hard to target and Rose moves too slowly to do any sort of fancy footwork to run back and forth between them. The flashlight also doesn’t work well up close, and it doesn’t stay steady when she’s swinging her pipe. So if it’s your only source of light to see your enemies, good luck with that. I also hear Rose screaming in pain when it looks like the enemies aren’t touching her, just clumsily walking towards her. All this just makes combat something to dread instead of look forward to. The combat controls need some serious fine-tuning. You can see what I mean at the eight-minute mark of this video I made (spoiler alert!):

Now, if you thought the combat system couldn’t get any worse, fast forward to the last minute or two of that same video. There’s a shadow monster that grabs onto you, at which point a little iPhone icon appears on your screen, telling you to shake your device to shake the monster free. The problem with this is that you can’t see what’s going on when you’re shaking. Still, the first time I encountered a shadow, I was able to take him down because he was alone. In the above video, however, he/she had friends. Between the shaking and the bad lighting, I couldn’t see what was going on. On top of that, I noticed when I watched the video that my weapon got unselected after the shaking. So I was trying to attack but nothing was happening. Long story short, I died and lost a big chunk of progress. I also have no idea how a second attempt at that battle would go any better, so I’ve no interest in trying to get back there to do it all over again. For now, I’ve had enough and I’m giving up on completing the game. Perhaps I’ll take another look after another update.

If you enjoy unforgiving survival horror games and have a lot more patience than I do, you might like the game. But if you get frustrated by awkward controls and problematic lightning, you may want to wait until some of these problems are addressed. Download the game here to give it a try and let me know how it goes.

If you already own the game, I suggest reading my starting guide before you play.