Her Story
By: Sam Barlow

I had intended to clean my apartment yesterday. That did not happen. I realized I had Her Story on my iPad for a day already and hadn’t even looked at it yet. The plan was to play just a few minutes to get a taste of it and then get back to being a responsible adult. Big mistake! Once I started, the game got its claws into my brain and wouldn’t let go. Every time I put my iPad down, I felt compelled to pick it up again. So I finally just gave in and enjoyed my quiet day alone with this unique game.

Her Story is the type of game you want to play knowing as little as possible going in, so I’m going to try to make this review as spoiler-free as I can.

Within five minutes of playing, I already had a couple of “WTF!?” moments that had me emailing the developer, Sam Barlow, with my revelations. I felt like I discovered some huge secret already, which I wasn’t supposed to know yet. As it turned out, that was only the tip of the iceberg, because there are so many twists and turns to this story. I probably annoyed Sam with my flurry of emails, since I had no one else to discuss it with when I was playing. And it’s definitely the kind of game you’ll want to talk about with others. No joke — I even tried to talk about it to my mom, unsuccessfully. If you can, I would even suggest playing it cooperatively with someone so you can be shocked and awed together. 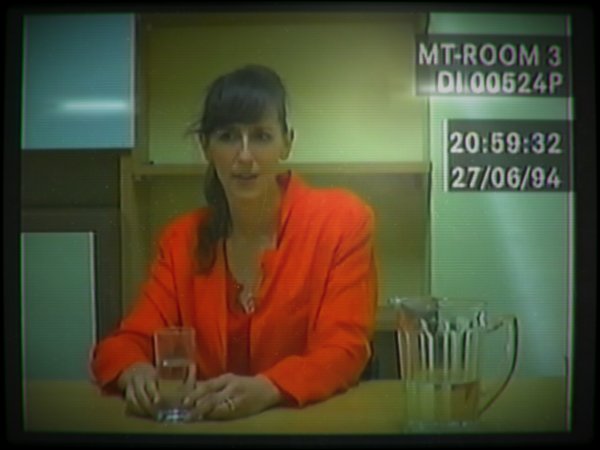 The entire game takes place inside an old computer. There are a couple of Readme.txt files that give you instructions for the game, but you’ll likely start playing before you even notice them. What you will notice is a search bar with the word “MURDER” pre-filled and waiting for you to press the “Search” button. When you do, four video entries will be available to watch. These each contain the word “murder” in them. The idea is that you watch these four videos, which are odd and make little sense on their own. But they’ll plant some ideas in your head, some keywords you can type into the search bar. And so it begins. 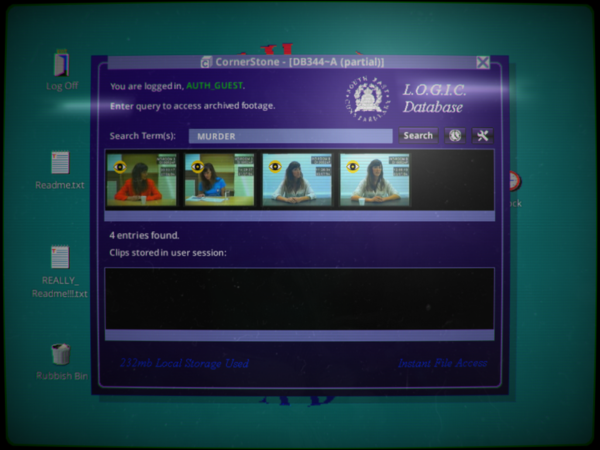 If you chose a good keyword, the archives will return some police interrogation video clips. There is a catch, though — you can only see the first five videos for any keyword. So if you hit on a word that’s very common, you’ll be told there are, say, 61 results, but only the first five will be available to watch. To see the rest, you’ll have to narrow down your search. It’s absolutely ridiculous how addictive searching for keywords can become.

After the first four videos, each player will unravel the story at a different pace, due to the search terms they use first. The clips come from several different interviews, all acted out by Viva Seifert, who does an excellent job making it interesting to watch. She doesn’t just sit still; there’s a lot of eye movements, fidgeting and awkward smiling. The material she’s given is layered, mysterious, and she pulls it off very convincingly. Watching her, listening her, you want to hear more of what she says. You want to hear her story. But it’s also hard to know if what you’re being told is the truth. She might say something that seems to contradict what you heard in another clip. Every time you think you know what’s going on, some new piece of information will completely throw you off. And that’s when you find yourself going deeper and deeper into the rabbit hole, not wanting to leave until you learn as much as you possibly can. 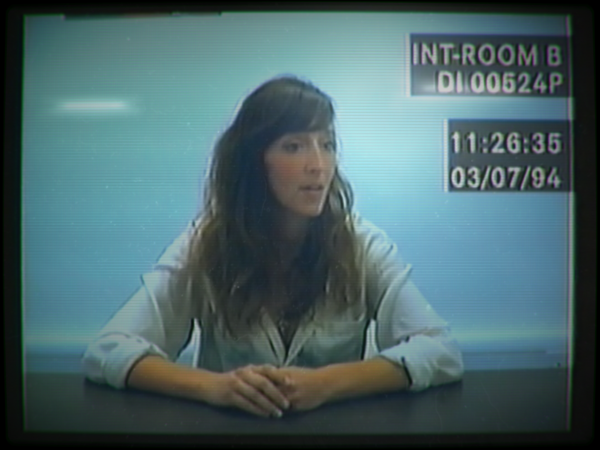 The videos are from 1994, which explains the crude archiving they’ve done with it. And since the footage is decades old, you can’t ask any direct questions. You can only search the archives of clips. Each video is time-stamped so you have some sense of the order. You can even save some videos for later and try to place them in the proper order to make more sense of them. But this is time-consuming and keeps you from doing what you really want to do, which is find more clips! I might eventually work on putting them in order once I’ve seen every clip, though. I want to see how the whole thing would play out.

The screen also has a glare to it (that can be removed) and feels like you’re playing on an old PC. It makes it feel like they could have been authentic, real clips that someone just found and decided to turn into a game. The music also helps capture the mood, quiet and unobtrusive but eerie at just the right moments. There’s something very unsettling about the soundtrack. The screen flickers and dims a bit when you find a really important clip and the the typing sounds like an old keyboard instead of the usual iPad sound. Even the subtitles fit the era. All these little touches create the perfect atmosphere to suck you right in. 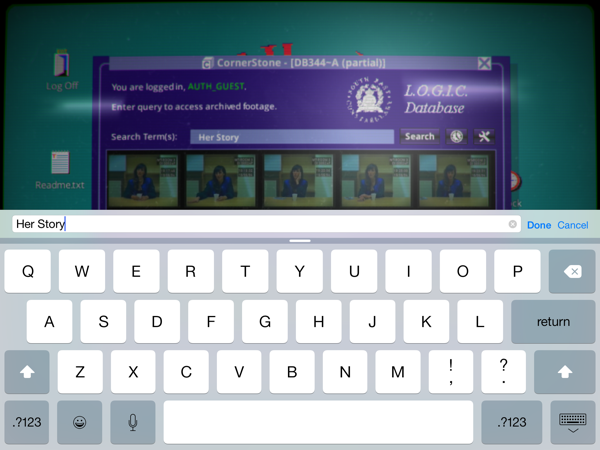 If you’re someone who needs a sense of progression when playing a game, there is a slightly hidden Database Checker that allows you to see how many clips you’ve found so far out of the few hundred available. You can technically end the game before finding them all, as the game will prompt you after it thinks you’ve found enough information. The ending seems like more of a formality then anything else, and a way to give a small bit of closure and context. But if you’re like me, you won’t be able to stop searching even after getting the ending. There’s this feeling that some huge revelation is slipping away from me. When I got down to missing only about 20 clips, finding a new one felt like a huge accomplishment. I’m still missing 15 now, but am determined to find every last one so I can see every bit of the story. I even overloaded the database with my frantic searches and might have to break out a dictionary soon and start from page one. I’m not sure everything will ever be 100% clear, even with every clip. I’m guessing there will be many discussions over what exactly happened. I know I’ll be thinking about it for a long time, wondering if I truly understood everything. 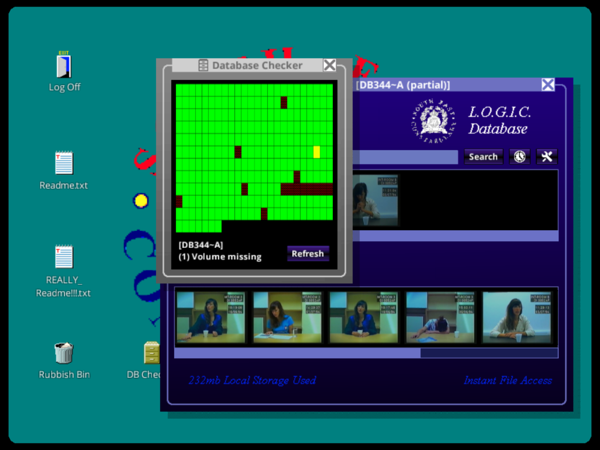 I would recommend getting the game no matter what device you play on, as it’s an experience no one should miss. But I tried it on both my iPhone 5 and iPad Air 2 and found my iPad much more enjoyable. That’s mainly because the iPhone version isn’t optimized to fit the screen. It’s just shrunken down, leaving black space to the sides. So everything will feel even smaller than usual. Still, you’re mostly just typing in words and then watching the videos. So it’s perfectly enjoyable on a small screen, as long as you’re comfortable typing on it. The game is also available on PC and Mac if you prefer that. (Update: I’ve spent more time with it on my iPhone 5, and I would highly recommend playing it on a bigger screen if that’s an option. The iPhone is pretty cramped. If you have no iPad, you may want to consider getting it on PC/Mac instead.) I do recommend blocking out all distractions, though, by either playing in a quiet room or with headphones on. This is a game you want to give your full attention so you don’t miss any details. Sadly, there’s no iCloud capabilities, so I couldn’t continue my obsessive searching on the same game on-the-go. I did mention it to the developer, though and he said he’d look into it. So there’s some hope for that. 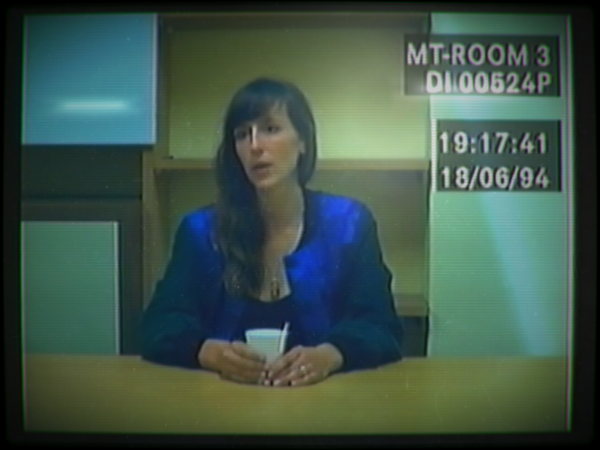 If there’s one game you play this year, make it Her Story. There are so many little nuances and details that I can’t talk about here without ruining it. But If you spend time with it and really pay attention, it will stay with you long after you stop playing. And it will likely be talked about for years to come, so you’re bound to trip over some spoilers sooner or later. I suggest playing it while you can still be completely surprised. The game will be out this Wednesday and I’ll update this post with App Store links. Till then, I’ll just talk to my cat about it.

Update: The game is now available in the App Store! You can download it here.

If you want to see just the first four clips and a little description of the game from me, you can watch this video. It has nothing more than the first few clips the game gives you:

Make sure to also check out my interview with creator Sam Barlow and actress Viva Seifert.

Γò¼├┤Γö£├ºΓö£ΓöÉDragons: Titan UprisingΓò¼├┤Γö£├ºΓö£├╗ Review: How to Not Train Your Dragon