KOI – Journey of Purity is one of those games I saw in the App Store and bought on whim, based on the description and video. I had just recently played Prune and had an itch for another artsy and tranquil puzzle game. But while KOI is most definitively a pretty game, it’s by no means tranquil.

The game has you controlling a small koi fish around the water. You do so by either tapping and dragging your finger on the screen or simply tapping where you want the fish to go. The problem is, the fish always keeps swimming past where you told it to go. This leads to unlimited frustration. It gets especially troublesome when your introduced to your first enemy fish in level two. If this fish sees you, it takes one of your lives. If you run out of lives, you die and have to start the whole level over. I also experienced this problem where the enemy fish got stuck in what I thought was a safe zone, trapping a fish I needed to get to. 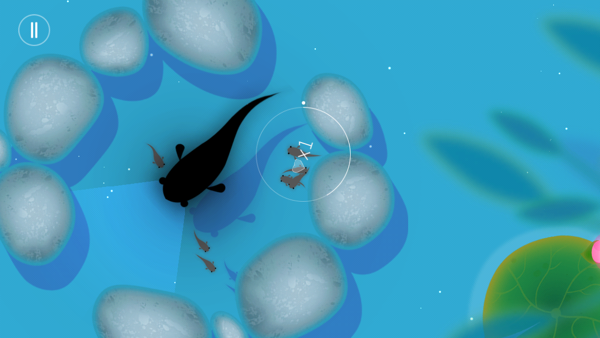 What’s even worse is that you can hardly see anything around your koi, so you’re navigating blindly without any idea what’s ahead. This would be less of a problem if there were no deaths. But in its current state, it’s a huge oversight of the developer not to allow the screen to be zoomed out.

The levels also each consist of several stages, so if you die you’ll have to repeat everything all over, not just the difficult part. This gets tedious very quickly. I gave up on the game on only level three when I got frustrated with the Simon puzzles. The game tasked me with tapping leaves in the order shown. This was fine up to about five leaves. But once it started giving me sequences of seven leaves, it stopped being the slightest bit fun. If you mess up any of the sequences, you have to start back at the first one. Bad choice for what could have been a serene and tranquil game.

There are some nice aspects to the game that I would have been able to enjoy more if the rest of the game hadn’t been designed so poorly. The puzzles often consist of you leading your koi to different colored fish and then leading those fish to flowers that they can bloom. Had the rest of the game been designed around these minimalistic puzzles, I think it could have been a great game. But as is, I don’t recommend it anyone who doesn’t have a lot of patience.

You can see the game in action here. I played it on my iPad Air 2, even though it’s only optimized for iPhone. It plays the same on both of my devices, so if you really want to play it for some reason, you should be fine on either:

If you want to ignore my warning and play the game anyway, you can download it here.