The Guides
By: Kevin Bradford and Luke Lisi

I got my hands on the cryptic puzzle game The Guides a couple weeks before release. I was instantly intrigued and excited at the prospect of a puzzle game that was designed around mobile devices. I loved the idea that everything I needed to know is contained inside the app, since I’ve been turned off by similar games that required too much outside knowledge. I spent a lot of time with it, determined to try and complete the available content — fifty levels — without any help.

Except for a couple of puzzles, I did succeed. But that’s not to say the game is too easy. It’s a bit of a mixed bag, actually. Some levels are so straightforward that they feel almost like filler, while others had me stumped for hours, sometimes even days. The most satisfying puzzles were the ones that had me stuck, staring at the screen for hours, but then feeling a bit dense when I finally figured out the answer. Since the game provides most of the information you need, you really just need to keep your eyes and ears open and pay attention to potential clues. I especially liked when clues or answers from previous levels were used again later, so you don’t just complete a level and forget about it. 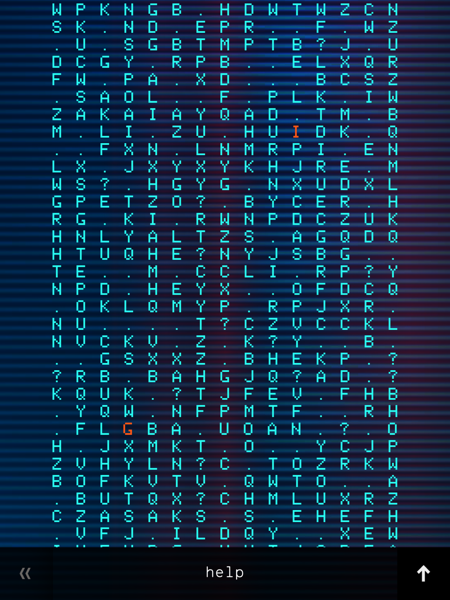 While some levels have the clues hidden in plain sight, many levels also have hints that you can access by tapping a little arrow on the bottom of the screen. Others are found by swiping the screen to the left. These hints are often necessary to solve a puzzle, so don’t think of them as cheating, even if you do have to make that extra effort to see them. In fact, checking to see if there is a hint for a puzzle felt like part of the puzzle itself. You’re being rewarded for exploring and trying all options instead of only paying attention to what’s right in front of your nose.

There are also built-in binary, Morse code and other decoders in the game that appear in the in-game menu without any warning. Again, you’re rewarded for looking around and poking at things to see if any new tools are available to you. You can solve most puzzles without these decoders, but you’d likely need to break out the pencil and paper (and maybe even Google) to do so. The inclusion of the tools means you can play the game anytime and anywhere and not have to quit because you don’t have pen, paper or the space to start scribbling notes. 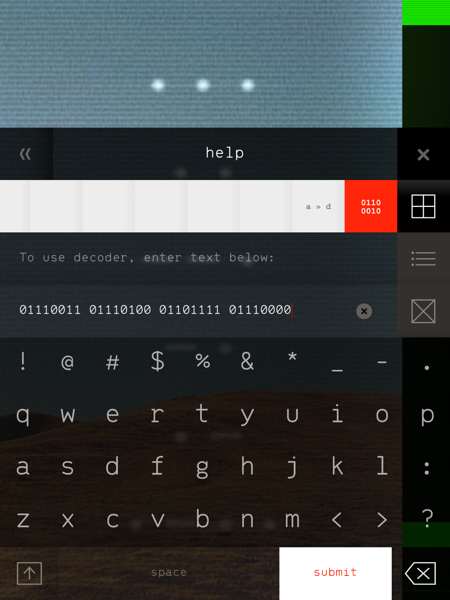 What immediately sucked me into the game were the audiovisual aesthetics. The look and feel of the game is very modern and minimalistic, but also varied. There are some Polaroid photos, curious documents, strange computer codes, and they all somehow fit nicely together. There’s also an air of mystery to the game that is still present even when you complete the current content. The music is very chill and ambient, sometimes resorting to simple beeps when it’s fitting. It’s almost otherworldly at times. I preferred playing with the sound all the way up, and this actually paid off on some levels where the sound effects can help you solve the level. I should note here, though, that one level is missing the sound that’s a clue to solving the puzzle. You can still solve it with a keen eye using the visual cues, but I personally had to get the information from the developer in order to pass that level. But they’re aware of it and it should be fixed in an update. 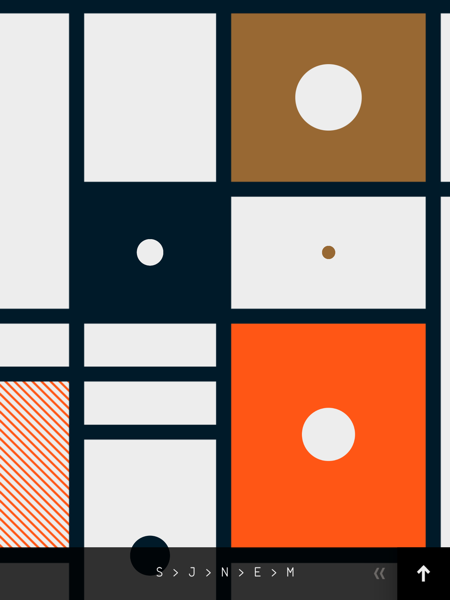 I played the entire game on my iPhone due to some App Store issues that prevented me from playing on my iPad before release. I liked playing on my iPhone because it meant I could pull it out anytime and anywhere and work on a puzzle. The game is also designed for such purpose. The only problems I had with it is that sometimes the text on the screen — say from a newspaper clipping — would be hard to read. I didn’t have this issue on my iPad, so I do believe we were supposed to be able to read the text and it wasn’t intentionally too small to comfortably read. I think this could easily be solved by simply adding a zoom feature to the iPhone version.

The other issue was mostly with the keyboard. The game uses its own keyboard, which doesn’t have autocorrect (understandably — you’re not always typing words) or a way to select, copy or paste text. I found myself making typos if I wasn’t very careful and deliberate in my typing. Since there’s no way to select a letter within the text and fix it, this often meant deleting everything and starting over. Still, this isn’t a huge issue, as you’re not typing more than a few characters in each level. This issue is also vastly improved when playing on a larger screen like an iPad. 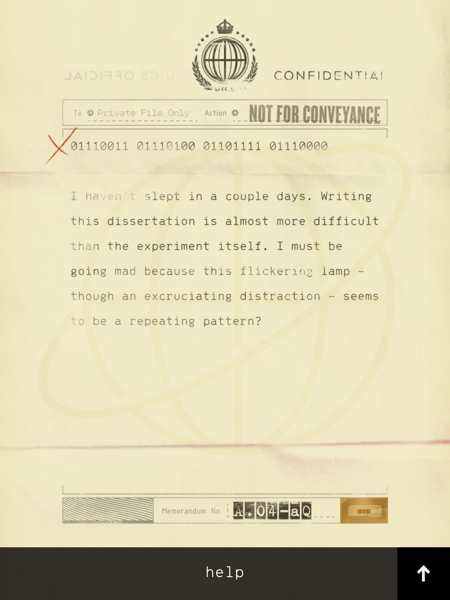 There’s a built-in camera in the game that I didn’t find as useful as I expected to. Since you can easily revisit any level you’ve completed, I often ended up doing that if I needed to. I’m hoping the camera can be given greater usage in an update, because as it currently stands, I found it easier to simply take a screen cap and look through my iPhone’s camera roll if needed.

I want to talk a bit about the optional sister app, the Compendium. I didn’t get my hands on it until after release, so I had already completed the main game by the time I read it. The Compendium is basically a story told in first person, starting with the narrator’s memories as a child during World War II. It starts off a bit slow, although written well. I started getting the sense from it that I was supposed to be this character when I’m playing the game itself. It also offers some clues to the puzzles in the main game and vice versa. So I do wish I had read it before (or while) playing, as I think it might have offered a fuller experience. Unfortunately, the story is currently only two chapters long and ends just when I really started to get sucked in. The third chapter should be coming in an update, though, and I look forward to seeing where it goes. 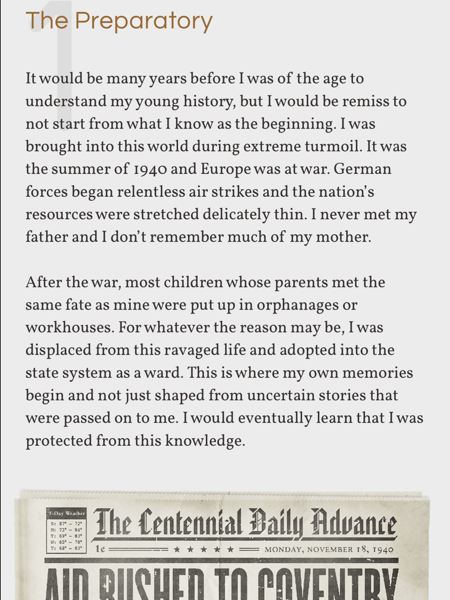 Overall, I rather enjoyed my time spent with The Guides. It’s at its strongest when it’s not too straightforward, but still very logical. Is it perfect? No. But if you’re a puzzle or cryptography fan, I think it’s definitely worth your time. The game has a lot going for it and it’s obvious that it’s a work of love. You should get more than your money’s worth out of it, especially since the developers plan to add a lot more content, all included as free updates. You can download the game here and the Compendium here.


If you’re already playing and need help, you can try my complete step-by-step walkthrough.