Lab Like’s Magic Flute by Mozart is a puzzle game I’d been looking forward to for quite some time now, and all of a sudden it was announced just last week. I got an advanced copy, so I was able to spend the week with it and really sink my teeth in.

The first thing that grabbed my attention was the narrator. I love listening to author Neil Gaiman read his own stories out loud. So when I booted up Magic Flute and it sounded to me like Mr. Gaiman was narrating it, I was instantly sucked in. Now, I don’t think they actually got him to do the voiceover work, but they did a pretty good job finding his vocal doppelg╬ô├╢┬úΓö£ΓûÆnger.

The narrator isn’t the only thing that’s music to my ears, though. Since this is a game based on Mozart’s opera by the same name, the soundtrack for the game is all Mozart’s music. There’s no singing, though. Everything is instrumental, so it breathes life into the game without being too distracting. It works really well with this type of game, and I never felt the desire to shut it off, no matter how long I stared at a specific level. 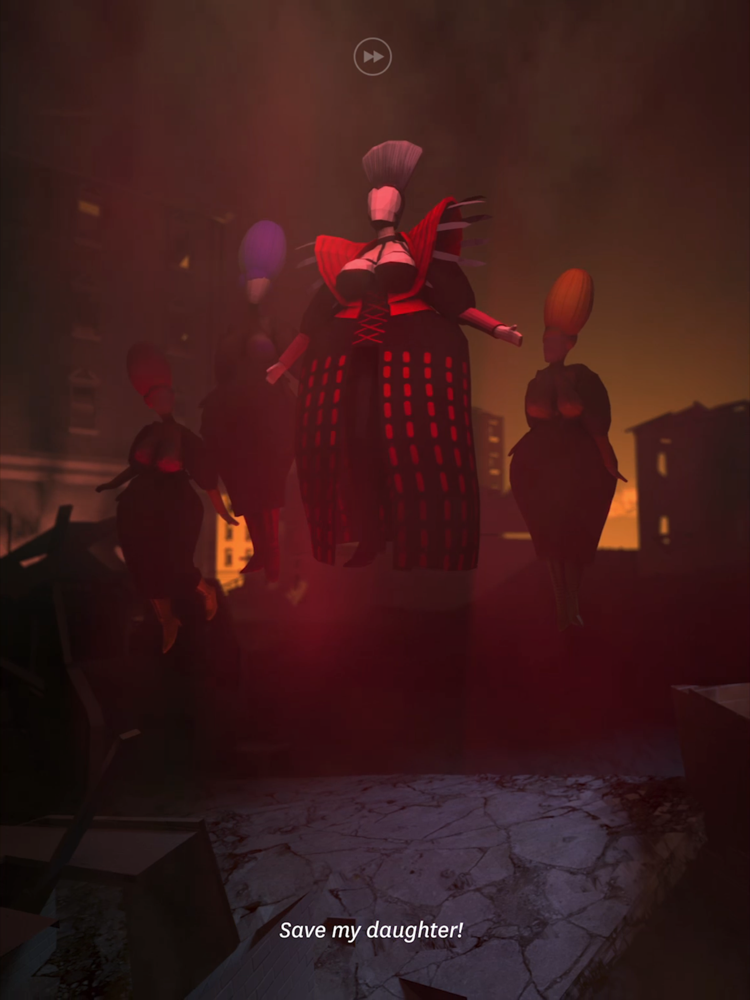 In the game, you play primarily as Tamino, a prince setting out to save and marry the princess Pamina, daughter of the Queen of the Night. Helping him along is his friend Papageno. Throughout the game, you’ll get to play as all three characters, sometimes two or three within a stage. The goal in each stage is usually to get all characters to the exit. You do so by sliding tiles and blocks around the board to create a path. But as you progress, new elements are added to make it more challenging. You also need to plan out your moves in advance, because it’s possible to work yourself into a corner if you’re not careful.

For instance, you first start off with only plain white tiles — which characters can stand on — and red grates that characters can’t stand on. Soon enough you’ll encounter tiles that can’t be moved at all, as well as cracked tiles that crumble when a character walks over them. Later on, 3D blocks are added to the mix, which, in addition to being able to slide around from side to side, can also move up and down. There are some time-based levels in which you need to avoid being spotted by guards or outrun a monkey. But for the most part, the game is as relaxing as you want it to be. And there’s certainly a lot of variety to keep things interesting — and challenging. 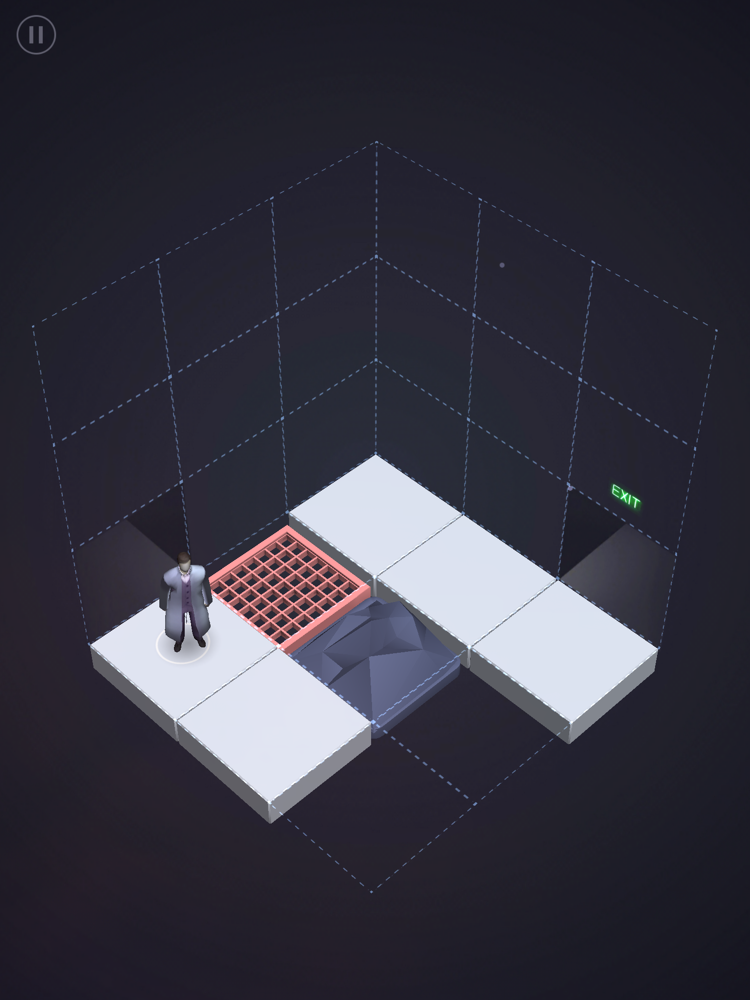 Let’s discuss the visuals a bit. They start off very bare, and if you were to stop playing after the third stage, there wouldn’t be much to talk about. Those are the tutorial levels, and they consist of just the pieces on the board and nothing else. But when you get to the fourth level, the background fills in with a sinister-looking forest populated by a giant snake that attacks. The forest soon gives way to cities and warehouses, which are not quite as captivating as the outdoor environments. The boards themselves also never really live up to the same standards as the backgrounds or the colorful cutscenes. 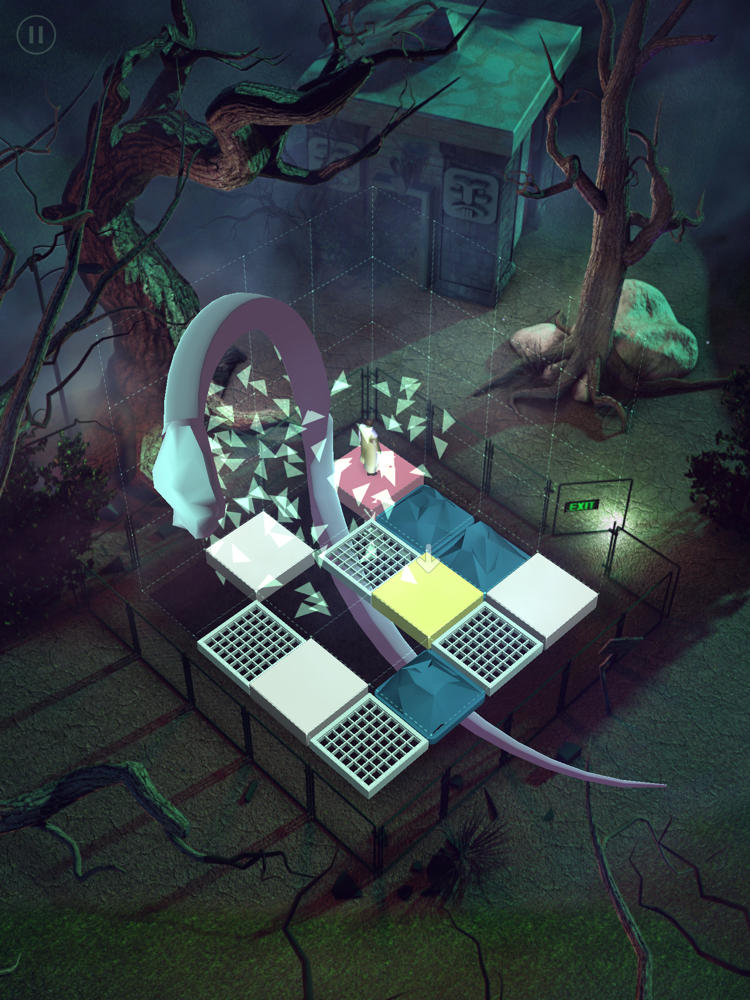 While there’s certainly much to like about the visuals — I especially love the level select screen — they didn’t consistently wow me the same way Monument Valley or Lara Croft GO did. For instance, both Magic Flute and Lara Croft GO feature a giant snake, but Magic Flute‘s is very simplistic, while Lara Croft GO‘s is gorgeously detailed. I also found myself wishing that the pieces on the board had more life, more personality. They’re often so barebones that I wonder if they were rushed to completion. They also stick out in many levels due to their color palette often differing so much from the background environments.

The three character sprites sometimes get stuck in weird glitches where they spin in circles or vibrate. They also run and walk a little oddly. Princess Pamina runs with her arms flailing about, like she’d never stepped outside before. It’s a bit off-putting. But surprisingly enough, each of the characters have very charming idling animations. Both Papageno and Pamina do a little dance while waiting, and Tamino takes out his flute and examines it. These little touches add a lot to the game, but they made me wish even more that other visuals had been given more attention. 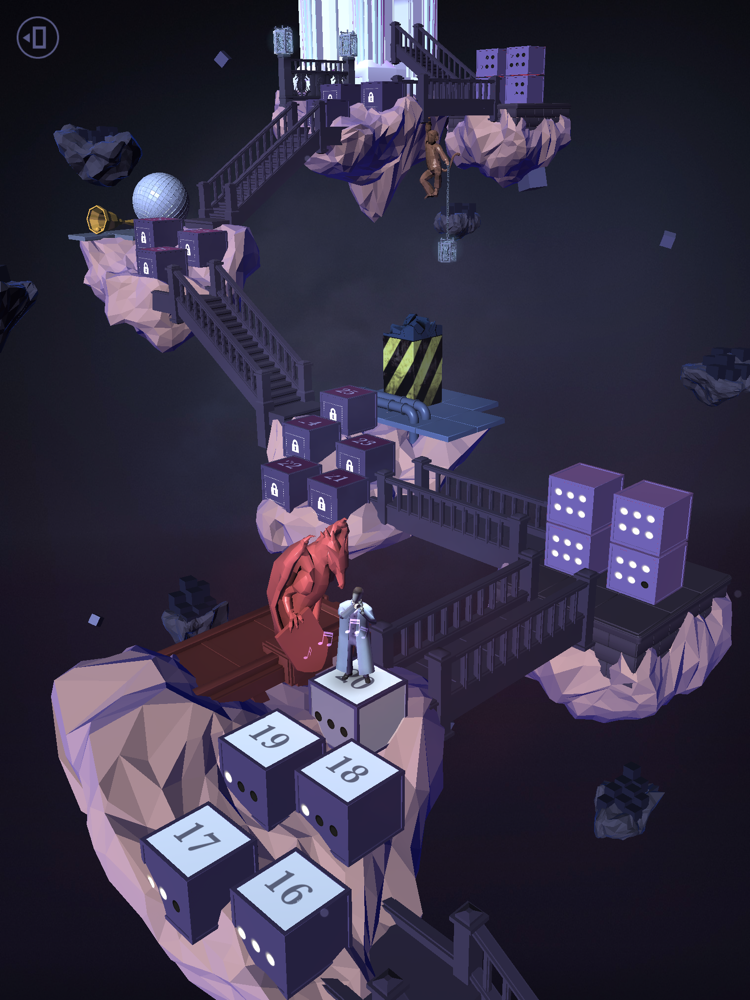 Still, despite the uneven visuals, the game is rather enjoyable due to the puzzles. It currently consists of Act I, which is made up of 32 levels. Act II is not available yet, but you get a good number of puzzles for your $2. Each level has a star system that rewards you one, two or three stars based on the time it took you to complete it. Since there are GameCenter leaderboards, I took my time progressing through the game because I kept trying to complete levels as fast as possible and get all three stars. It gives the game some replay value, as well as a bigger challenge for those who get competitive. But if you just want to chill out and not worry about that, you can do so for most of the game. There’s no way to skip levels, unfortunately. So if you get stuck on one, you just have to work your way through it or try my walkthrough for help. 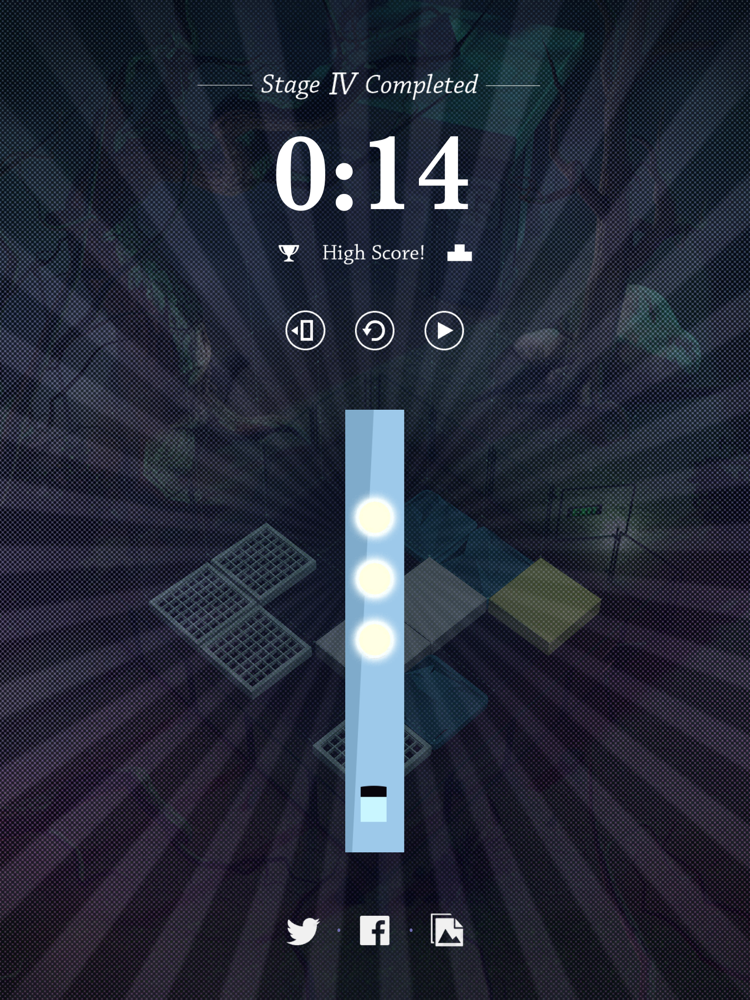 There’s a lot more freedom here than in Monument Valley or Lara Craft GO, and sometimes that freedom comes at a price. I loved the freedom at first, because it makes the game more challenging and less straightforward. But it also means that you might end up glitching the game (sometimes without realizing it) or simply work yourself into a corner. The stages get fairly complex and you have a lot of control over them, so it’s harder to force your way to a solution using trial-and-error. If you’re looking for a challenging puzzle game, I think this will do the job. Some of the levels are tricky enough that even after playing through them several times, I still forget the solution. 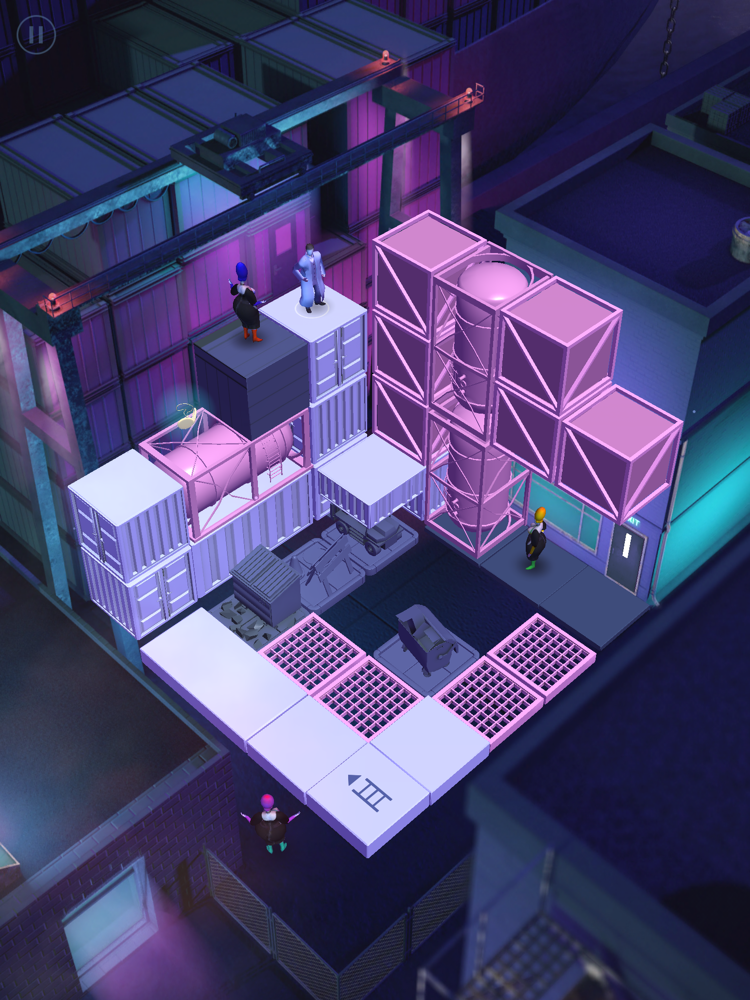 Sometimes it’s hard to tell whether something’s a game mechanic or a glitch. Some things I was using as a strategy turned out to be glitches, according to the developer. The game seems to break its own rules sometimes, too. All these things make the game feel a bit rough around the edges compared to the more polished games I’ve mentioned here. There’s also no iCloud capabilities, so if you have two devices, you’ll have to choose one to play on or catch up on both.

I almost didn’t complete the game before writing this review because of a nasty bug I encountered on level 25. Since there’s no way to skip a level, I had no choice but to either give up or keep trying. Luckily, after about three or four times getting foiled by the glitches, I was able to complete the level. The developers said it’s a very rare bug and that I got unlucky, but just be aware you might encounter it. If you don’t mind the possibility of getting stuck on 25 until it’s fixed, grab the game anyway so you can enjoy most of it right away. 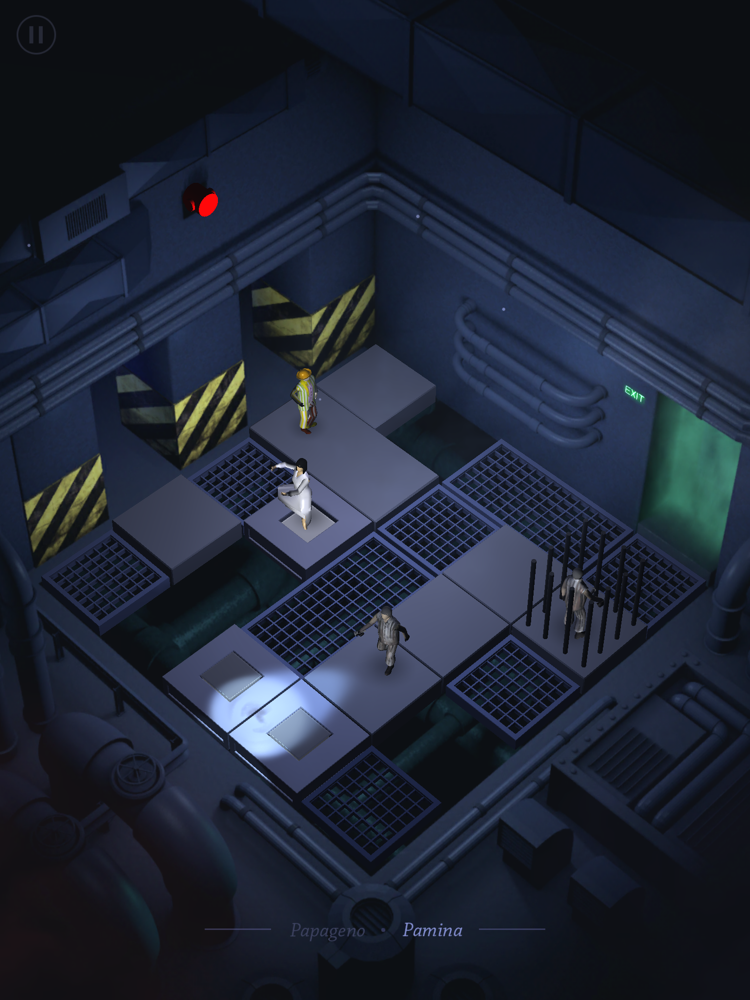 Some levels are also randomized, which would normally be fine. But sometimes this means the game could give you an impossible level to cross. Take this one, for instance. The man in the upper right corner is blocking the exit. I could restart and hope the red tiles are randomized differently so as not to block him from moving. But that shouldn’t be the solution. This particular level is very late in the game, but it’s also very glitchy. The farther I got in the game, the bigger the bugs. If you’re ok with that, then it’s a great game. But if you get frustrated easily, you may want to avoid it until all the problems are worked out. The developer said the issues with this particular level were already fixed, but that update hasn’t hit yet. There’s always the option to keep restarting until it works out, though. 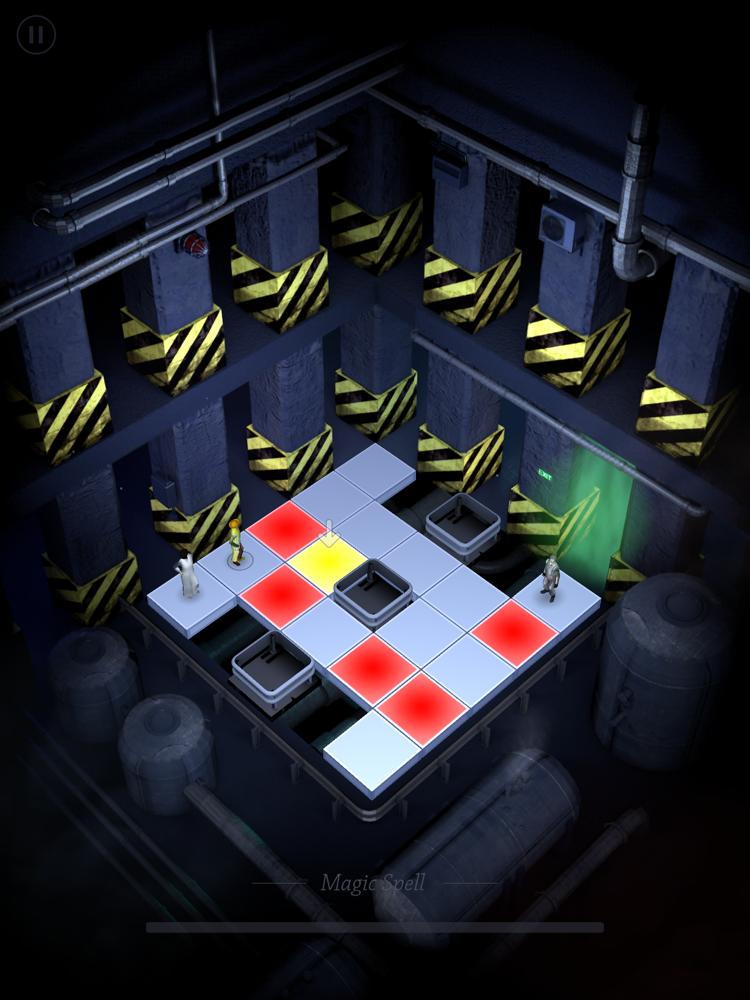 Despite the issues I encountered, I really did enjoy my time with this game, and I’m still replaying some of the less frustrating levels to try and beat my high scores. I also like replaying some of the cutscenes to hear that amazing British narrator. If you have a bit of patience, I suggest picking it up and just being aware that it’s not quite as polished as it could be. The puzzles are unique and challenging, and should give your brain a good workout as long you don’t get frustrated enough to quit. The game is also only $1.99, with no in-app purchases (IAPs) or limitations. Act II might cost extra when it’s ready, but there’s no definitive word on that yet. If you’re looking for a tricky puzzler and don’t mind that it’s a little rough around the edges, download Magic Flute by Mozart and see if you can beat my high scores!

If you’re already playing and need some help, try my walkthrough guide.