**Update: Now it seems this was all a big App Store bug and apps are returning to people’s Purchase History. Hopefully that’s the end of this and we can all continue happily buying iOS games. 🙂 **

I spent the last year nursing a dying iPhone 5 to make it last one more year, just so I could see if Apple would return to making a 4-inch phone again. If I had a dollar for every time I was told “Just buy an Android,” I’d be able to afford every new phone on the market. But I insisted I needed an iPhone, despite its $750 price tag and a size I didn’t really want.

Why? Well, one reason is that I tend to break every PC I own, so I like that it’s nearly impossible to get a virus or other serious problems on an iOS device. I also like how responsive the touch screen is. It feels like magic.

The other — bigger — reason, of course, is that I run an iOS gaming site. But even that’s a flimsy reason if you think about it — many of these games come to Android, even if they’re sometimes a bit late.

But the number one reason I give everyone is that I have all these apps that I’ve bought over the years. I have many I’ve finished, but even more that are in my backlog, waiting for me to find the time to play. I only just this week played a two-year old game, Device 6.

I stick with Apple devices because of their ecosystem. If I bought an Android device, I’d have to start from scratch, whereas my iOS purchases go with me to any new iDevices. And I have been a loyal Apple customer precisely because of their Purchase History that stores all games I’ve ever downloaded, even if they’re no longer in the App Store.

While going through all my old reviews these last couple of months to add games to my Recommended List, I’ve noticed some games have disappeared from both the App Store and my purchase history. One that really made me sad was Lechuza, a “horror point-and-click game” that featured some of the quirkiest artwork I’ve seen in a game. The developer of that game told me they pulled it because they couldn’t support it anymore. So that’s understandable.

But I also noticed that Gameloft’s Sacred Odyssey was removed from the App Store. I had bought the version that is unlocked through in-app-purchases (IAP), so I couldn’t play it anymore even though I could still download it from my purchase history. This was something I had hoped Apple would fix in the future, by allowing the IAP purchases to be restored in those games. I wrote more about my frustration with that here.

Well, now it seems that not only is Apple not fixing that issue, but, according to Pocket Gamer, they’ve decided that games removed from the App Store will no longer appear in Purchase History. When games started disappearing these last few weeks, I was still hopeful that it might have been a bug or a mistake. But according to Apple, it was on purpose and this is a new policy.

I don’t know about you, but I’m really regretting the iPad Air 2 and iPhone 6S I bought this year. Serious case of buyer’s remorse, especially on the iPad, which I bought specifically for gaming. I only did so because there was no tablet/PC alternative that would meet my needs. Looks like that’s changed with the arrival of the Surface Book, though.

But back on topic. I’m not 100% sure if this will affect all apps. I noticed that Sacred Odyssey is no longer available at all in my Purchase History, even the version that downloaded a few months back. 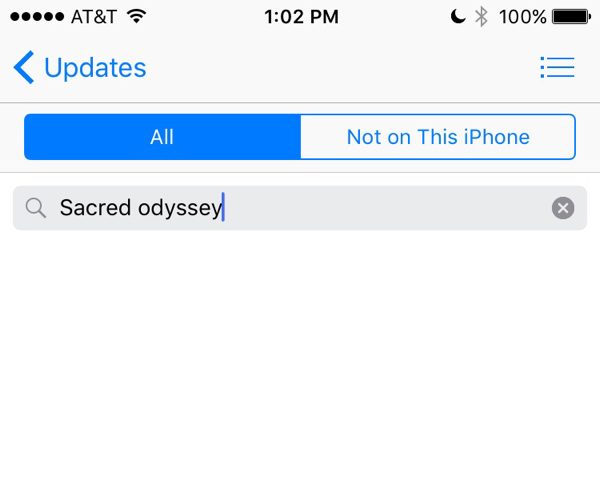 But then, I searched for Antrim Escape, knowing that 2 and 3 are still in the store but the first was only in my purchase history. Well, it looks like it’s still there. I downloaded it to my 6S and it still works, even on iOS 9. I’m not sure if that’s the reason why and only apps that don’t work on iOS 9 are disappearing. This is the mystery I’d love to solve, so if you have any apps you know are gone from the store but still download, please share them with me in the comments section. 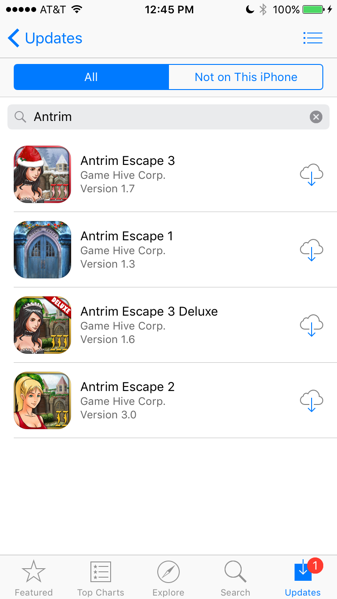 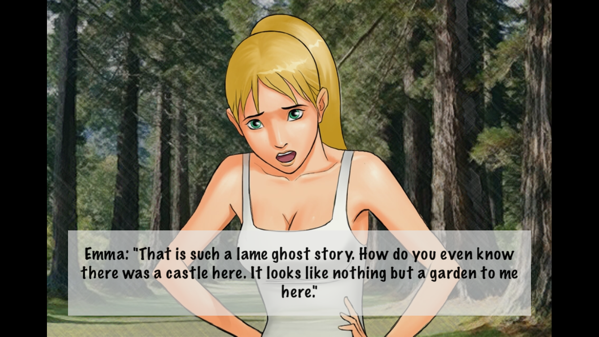 It’s possible that that app and other apps are only still available because they’re still in some App Store in at least one country. That seems to be a workaround if developers want their games to stay in everyone’s Purchase History. But I’m not sure if that’s the case here. I’ll try to find out and update this.

For now, at least, I would recommend backing up to a hard drive any games you really care about. It’s a crappy answer, but it might be the only one. Even if people complain and Apple eventually comes to their senses, it won’t be something that happens overnight. Apple takes time to make every decision, and they don’t change their minds easily.

This is a serious issue for me and I’m wondering if I should return my 6S before my two weeks are up. One thing I do know for sure is that it will make me incredibly selective about the games I do spend my money on. You’re essentially renting games now, and I suspect this will hurt premium games the most, as it will make people hesitant to spend money on things that could disappear on a whim.

Love You To Bits: Complete Walkthrough Guide With All Collectibles