Everyone has been calling Martin Jonasson’s Twofold, Inc. “the next Threes!” At first glance, it appears to be something I should love and be spending hours on trying to beat my high score. But every time I try to get into it, I get frustrated due to the high reliance on luck and confusing scoring system. I play a little, then quit in a fit of rage as every game ends without getting even close to my current high score.

Now, I’m no stranger to luck playing a part in a game. I’m a big fan of quality match-3 games and have invested many hours into some of these. The difference with those games is that I felt like I had a lot of control over the outcome, and that I could strategize several moves ahead. Hero Emblems rewards you for sacrificing four-tile matches or T-shaped matches to set the board up for a five-tile line match, which creates a special tile that sets off all your characters’ special abilities. Zombie Match Defense rewards you for saving up power-ups to combine them into more powerful ones. Muertitos rewards you for setting up the board for bigger matches and saving up your power-ups for when they can earn you the most points. Each of these games rely on some bit of luck, but when you get a high score or defeat a tricky monster, it feels rewarding because you overcame bad luck using strategy. With Twofold, my high scores felt empty because I didn’t feel like I had much hand in them. I didn’t get a high from from a new high score. 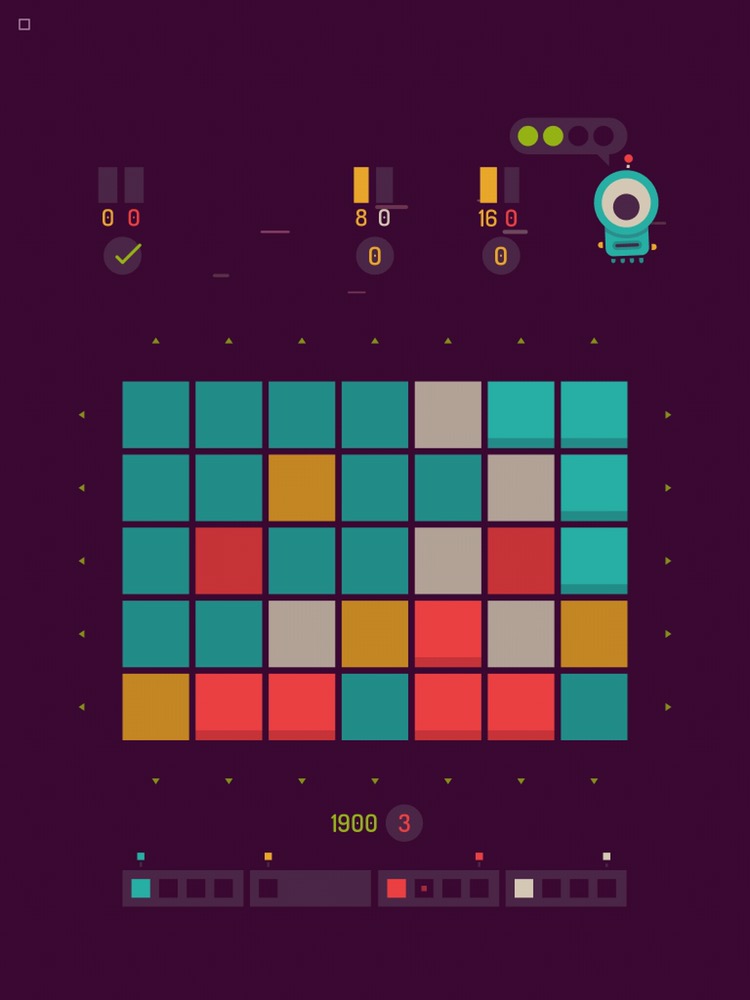 Let me explain how the game works so you can understand why this is. Each game starts with a 5×7 grid of colored tiles. There are only four colors — red, yellow, teal, and white. At the top of the screen you’ll see colored bars with numbers under them. These are the “requests” for that round. You need to match tiles of that color that add up to those numbers, and then that bar will disappear. The numbers under those are moves you have left to get rid of those bars before you start losing lives, which are the green dots by the little robot. You can earn more moves or turns by diminishing other bars. 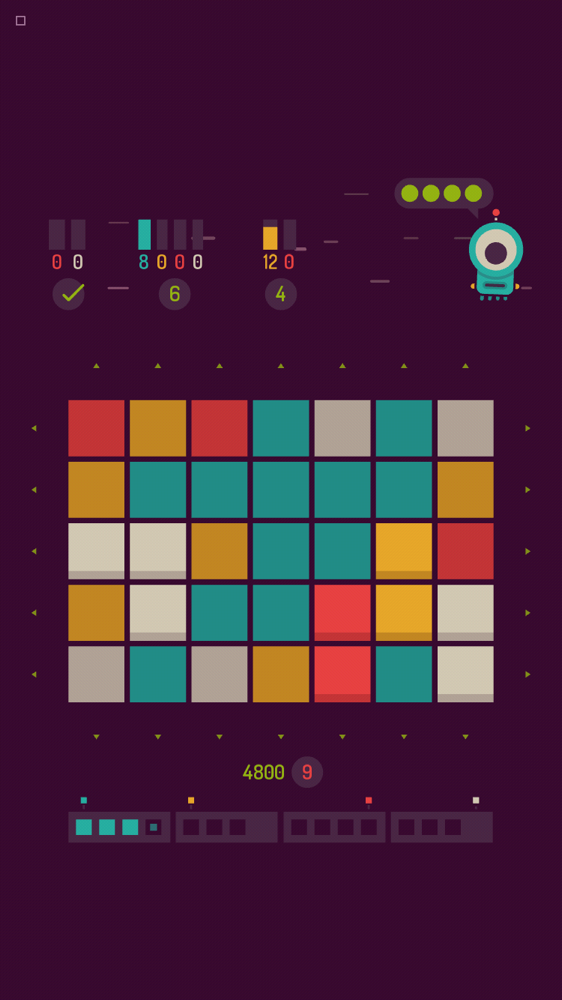 The way you match tiles is by drawing a line from one to the other. When you match tiles, each one is a multiplier of 2. So one tile starts at 2, multiplied by another 2-point tile becomes 4, multiplied by another becomes 8, and another 16, 32, 64, etc. So a long string can potentially add up to hundreds of thousands. The catches are, you can only draw in straight lines, each tile can only be used once, and you must include all tiles of the same color in that group. If it’s not possible to draw a line that will include all touching tiles, then the game won’t let you make that match. 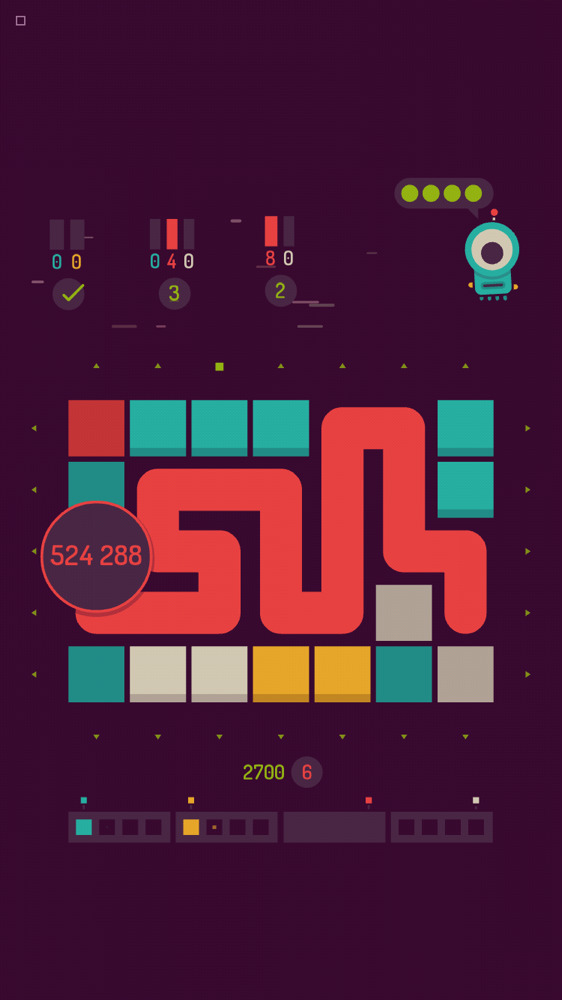 To help alleviate the sheer reliance on luck, there are also arrows around the edges of the board. These allow you to shift a row or column one tile over. But this will also use up a move, so you can’t do it too often without risking some lives. Still, it’s a big part of the game because unless you get lucky enough to have tiles matched up perfectly, you’ll have no choice but to shift them. Additionally, the game gives you an extra tile of each color at the bottom of the screen. These can be used to drag onto the board to either connect tiles of the same color or break up tiles of another color. You can also earn more of these tiles by matching more than the requests ask of you. But beware — if you have more than one of a color, they have to be used altogether. Using these tiles does not count as a move, so it’s preferable to shifting the board if you can spare it.

It’s all a bit hard to explain, and it might be easier to understand through the video I made below.

The game highlights a match for you so you don’t have to think about it before trying to draw the line. This is welcome, but the problem with it is that it removes all reason for the line-drawing aspect of the game. There are no timers and no penalties for messing up a line. The game just lets you try again. As you are drawing the line, you can see the multiplier grow with each tile. That’s the only benefit I can see, and it still doesn’t seem worth the time and effort for me. I would have preferred the game just allow me to tap and hold to see the multiplier, and release my finger if I want to make that move. Alternatively — and preferably — I would have liked the game to be like any other match-three, where you can link only some of the tiles that are grouped together. It would then reward you for making large groups of a color instead of penalizing you because they don’t form the right shape. And luck would be less of a factor. As it is, having too much of one color on the board can be as damning as having none at all. So luck can screw you over both ways. But the alternative would be a completely different game, and I’m not going to tell the developer how to make the rules. I’m sure there are people who like this aspect of it, but I’m not one of them. 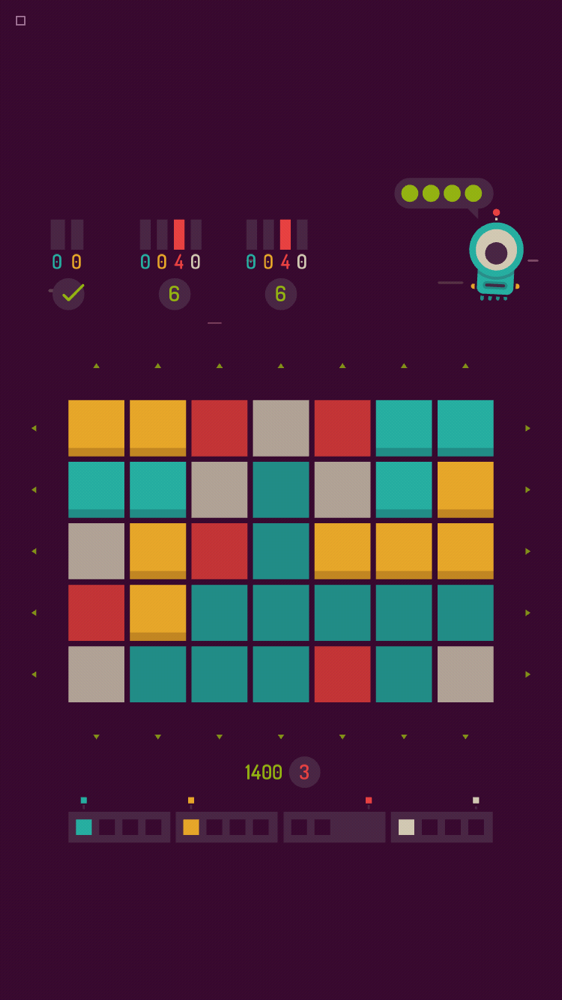 What also frustrates me to no end is that the game is a high score chaser, but you don’t earn any points for a round unless you complete it. So you can be doing really well on a round, but still lose the game before a round ends and it’s like you never even bothered. I just get frustrated every time the game ends and the last few minutes of playing didn’t factor into my score. Perhaps I would have been able to get on board if the score was based on rounds you lasted, so at least there would be that goal of “lasting one more round.” But as is, I don’t feel like like I have a tangible goal. The scoring is too confusing and it seems based on how many moves I have left as opposed to how far I’ve gotten. 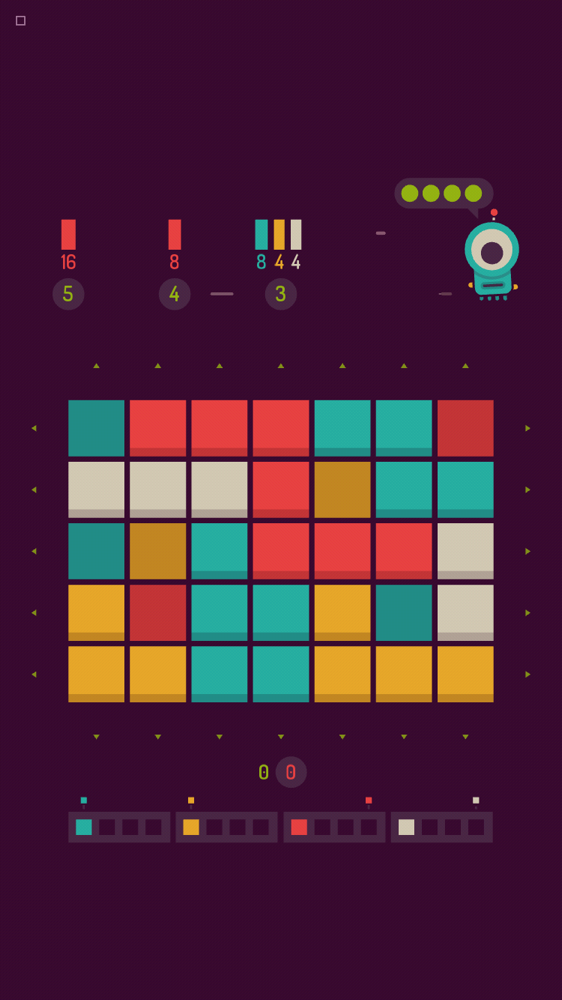 The scoring is also ridiculously complicated and it’s hard to figure out what the consequences of each move is, since you don’t see the results of it until you complete the full round of requests. Perhaps if I could see the numbers being added and subtracted to the score with each move I make, I could learn from it. But every time I see my score go up a couple hundred points at the end of a round versus a thousand points, I’m left scratching my head as to why. With Threes, the scoring is simple — the cards on the board when you’re done are added up. It doesn’t mater how you got those cards, just that they’re there at the end. And that’s what I think makes a great endless puzzler — the game should be about surviving the longest. I’m not saying a game can’t have a more complicated scoring system. I just think if it does, it should be a lot more transparent about it than Twofold is. I don’t consider it fun to have to figure out the scoring system on my own. Even Swapperoo, which I have mixed feelings about, doesn’t show your score till the end, but it adds it all up for you so you can see how you got that score and adjust your strategy for next time. 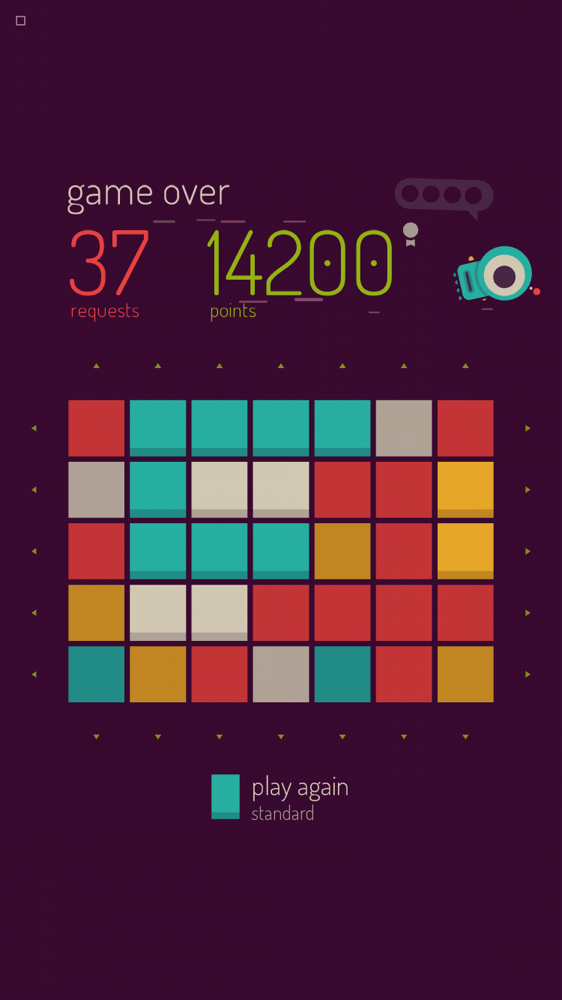 Another favorite high score-chasing puzzler of mine is SPL-T, and it also has scoring that’s hard to keep track of. But I don’t really feel that I need to. The confusing rules are at least explained in detail and even if I’m not watching the score closely, I feel I understand it and have control over it. That doesn’t feel like the case with Twofold, because I could think I’m doing well but the score doesn’t reflect that. And vice versa.

The fact that each game starts you off with an extra tile of each color on the bottom makes me think the developer knows that there’s an imbalance. I’ve never played any quality match-three or puzzle game that gives you power-ups before you earn them. But it’s possible to get such a horrible opening that you have no choice but to use the crutches provided. And of course, if you do use them early on, you won’t have them to save your bacon when the game gets harder. I also don’t like that there are minor hints in the form of a bouncing bonus tile, indicating that the game wants you to use it. Once I see it, it’s hard to ignore it, so I often end up using it. I haven’t found a way to shut those off. 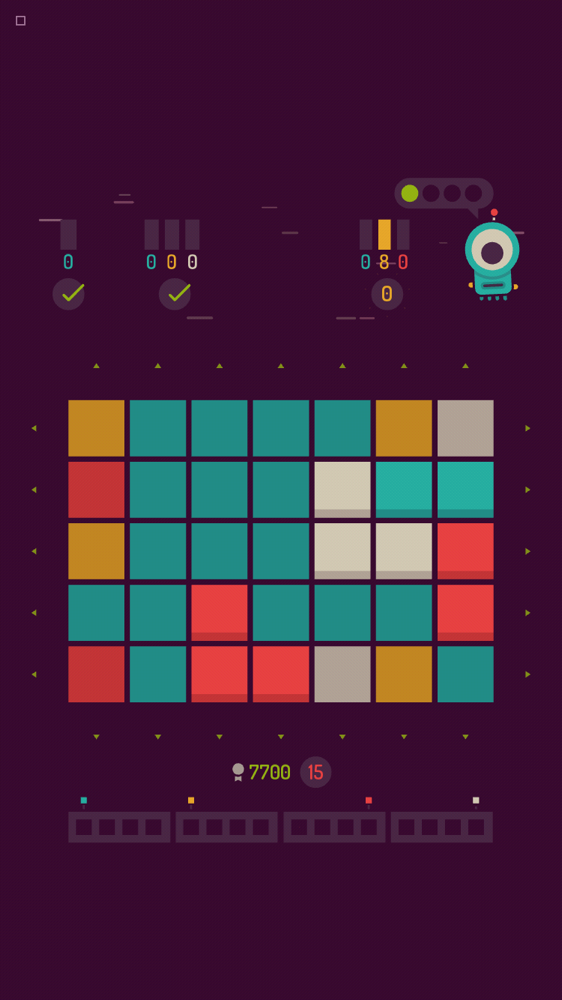 I’ve also been restarting the game a lot to see what kind of opening requests I might get. I had ones that were very easy, requiring only a few short matches. Then I’ve had others that require a lot more multiples. For example, I added up a few of them to show how different they can be. The first number is the requests added up, while the numbers in parentheses are the moves under the three different requests: 60 ( 5 4 3 ) / 112 (5 5 5) / 72 (5 5 3) / 48 (4 4 3). Of course my score will suffer if I have to make more matches with the same number of moves. This too made the game feel hollow. Why wouldn’t I want to start a game off with only 48 requests instead of 112? I’d be at a disadvantage with 112, and more likely to use my extra tiles early on. I’m not sure if the game makes up for these discrepancies later on, as it’s hard to keep track of any patterns. But seeing such huge differences in starting boards makes the game seem even more reliant on luck. 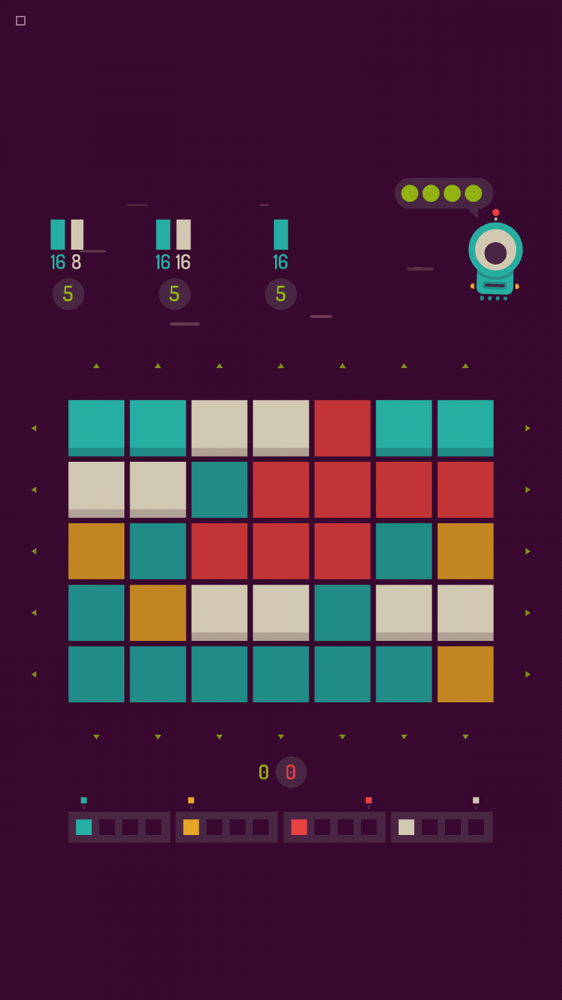 To make matters worse, if you see a game will have a rough beginning and want to try and change your luck by restarting with a new board, it takes four(!) taps every time you want to do that. I wish there had just been a “restart” button with a confirmation of yes/no to make sure you don’t accidentally wipe your game.

I might have been able to get hooked on the game if only one of these things had been an issue. But with all of them combined, I’m simply not enjoying the game. It just makes me angry. Every time I think I’m doing well, things start to fall apart and I can’t save it no matter what I do. In fact, it just made me want to go back to playing SPL-T again, because that is 100% strategy, zero luck. If the game still sounds intriguing to you and you want to crack its code, you can download it here.