I’m not sure exactly what I expected from Dead Mage Studios’ iOS and Android game Epic of Kings. As someone who’s invested hours and hours into all three of Chair’s Infinity Blade games, I was hoping it might use some inspiration from those but offer some of its own original ideas. I wasn’t a fan of Infinity Blade‘s in-app purchases (IAP) and ability to use gold to buy experience points. I also didn’t like the introduction of a second currency or timers in Infinity Blade 3. So when I saw Epic of Kings has no IAP, I decided to give it a try.

I had high hopes when the opening cut scene began. The visuals might not be even close to what we saw even in the original Infinity Blade, but they’re still pretty impressive. The voice acting was top-notch and the story it was setting up sounded interesting. You can see the opening sequence in this video below:

But soon after the game began, I grew disappointed. Those who have played Infinity Blade already know that it’s on-rails, meaning it’s not an open world exploration game. You can’t walk around as you please. You tap on a pulsating circle to move to the next area or enemy. But it makes up for that lack of freedom by offering breathtaking visuals, a deep swipe-based combat system, and tons and tons of equipment. The experience and leveling system is also unique in that you only earn experience through your equipment. If your equipment has no room to grow, you won’t gain any experience from the battle. It means you have to leave your comfort zone and use other equipment to get the experience from them. Infinity Blade also gives you some freedom over the camera, allowing you to look around for potions, money bags and chests. There are also branching paths you can take, some leading to more difficult battles than others.

Epic of Kings strips this all down to the barest bones. It’s even more on-rails, in that you can’t look around or interact with anything in the environment. All you can do is tap on the glowing particles in front of you and your character will automatically run to the next one. If there’s an enemy right behind the particles, you’ll enter a battle. If there’s a treasure chest, you have to tap it and then do a mindless mini-game of swiping arrows or tapping the screen to open it. You’ll be rewarded with either some experience or a couple of health potions. 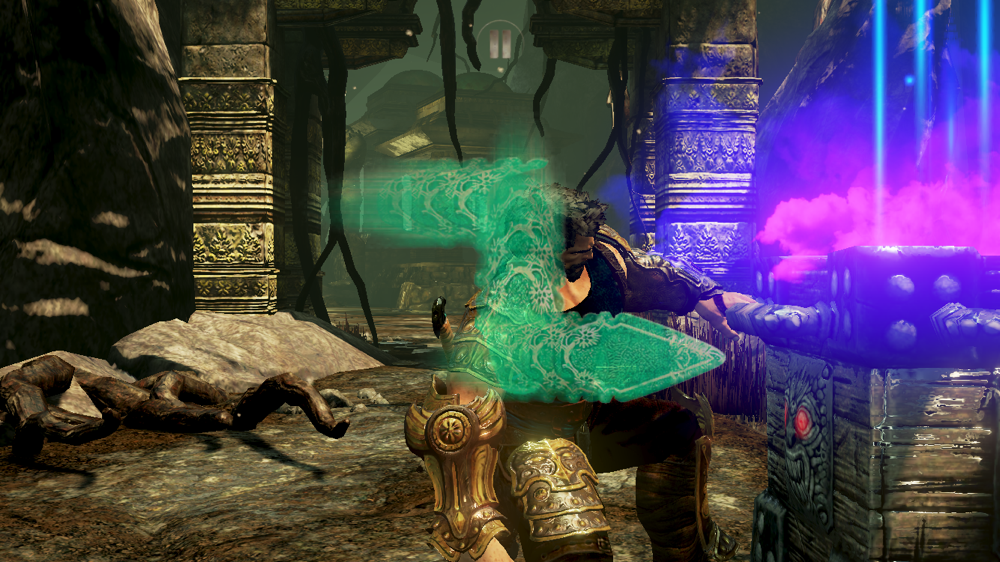 The battles themselves are also watered down compared to Infinity Blade. The controls are basically the same — tap and dodge buttons to the left and right, block in the center. You then swipe up, down, left, and right to parry or attack. There’s also a powerful attack that you can unleash once the meter fills up from damaging your opponents. I first started playing on my iPad Air 2 and had some issues with swipes not registering or not responding fast enough. I also found it a bit cumbersome to play on my iPad, since the screen is so big. I had fewer problems when I switched over to my iPhone, but there’s no iCloud saves, so I had to start from scratch on there. 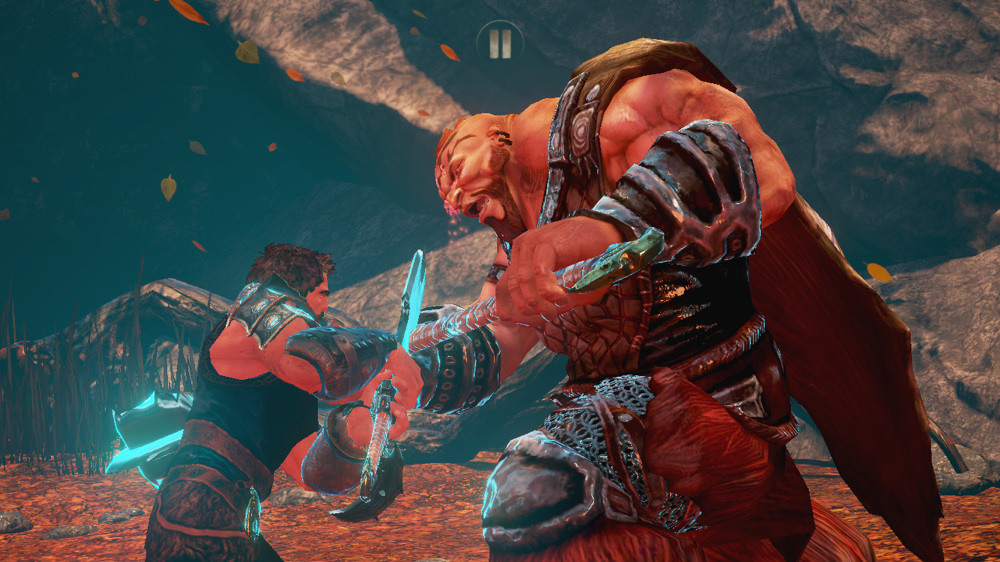 My biggest gripe with the battles is probably the vantage point. Most battles have the camera angled awkwardly so you’re looking at your character almost from the side instead of behind him. It makes it difficult (at least for me) to figure out where attacks are coming from in order to parry or dodge them. Infinity Blade is angled a bit sometimes, but the camera is still behind you, not next to you. Because of this, I never really got used to dodging in Epic of Kings and instead focused more on parrying and blocking. Parrying still caused me trouble compared to Infinity Blade, but sometimes wildly swiping worked in my favor. If not, the battles and levels are pretty short, so restarting a level is just a small nuisance. It’s more tedious than challenging. 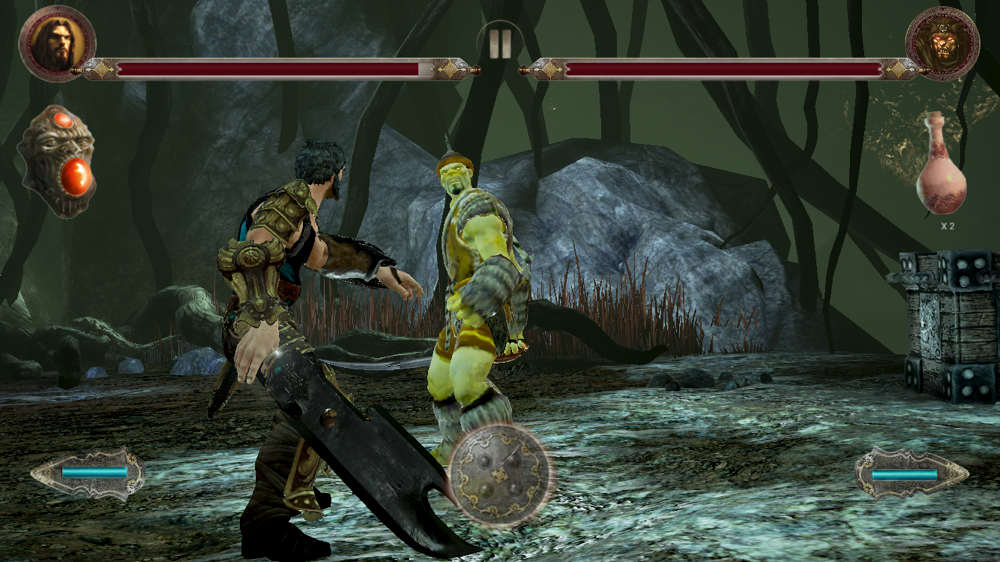 The game is broken up into twenty levels, which have to be played in order. A level can consist of several enemies in a row or a single boss battle. There are no alternate paths. At the end of a level, you’re rewarded experience based on your performance. If you level up, you’re given two skill points to update your stats — defense, attack, or critical attack chance. The game calls them skills, but let’s be real here — they’re just stats. You can’t upgrade one stat twice on one level-up, though. You have to choose two different stats. There’s also a cap on the stats. For instance, once your attack level hits fifty points, you’ll have to upgrade the others. You can also replay a level to earn more experience if you’re having trouble completing the next level. 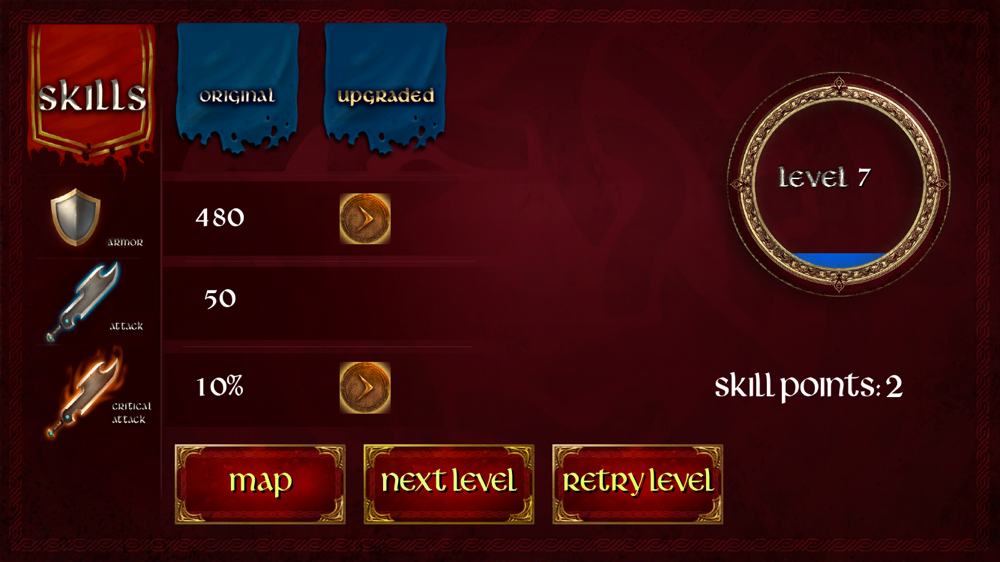 There’s no equipment to loot, earn or buy, but your appearance does change as you add stat points to your armor. There are no special skills or skill trees. The only item you’ll come across are the health potions in the treasure chests, and those don’t carry over from level to level. Whatever you’re given on a particular level is what you get to use. You can’t be frugal to save them up for a more challenging battle.

The usual battles are occasionally broken up by quick time events (QTE). This means an arrow appears on the screen and you need to swipe in that direction. Usually the sequence will take up an entire level, such as with an ogre or dragon chasing you. Once again, Infinity Blade did this better. The dragons that Chair created are so lifelike that I would love nothing more than a game centered around dragons of that quality. The dragon battles are also fought through QTE swipes and tapping in Infinity Blade, but in a much more interesting way — both visually and technically — so that once again I’m just left wondering why this game even exists. You can see an example below with the ogre. There’s even a part where we’re just staring at each other because I can’t do anything other than follow the arrows when they finally decide to show up.

There was one point in the game where I thought, “Ah something interesting! Maybe a branching path?” Someone is locked behind bars and asks you to help free them. They make their case and you say, “Why should I trust you?” He answers, “You don’t have to.” This would have been a good opportunity for a branching storyline where your choice affects the outcome of your game. But you’re not given any option other than to tap on the glowing particles and free him. Then the guy runs off and he doesn’t even really play much of a part in the story. It’s just a missed opportunity. 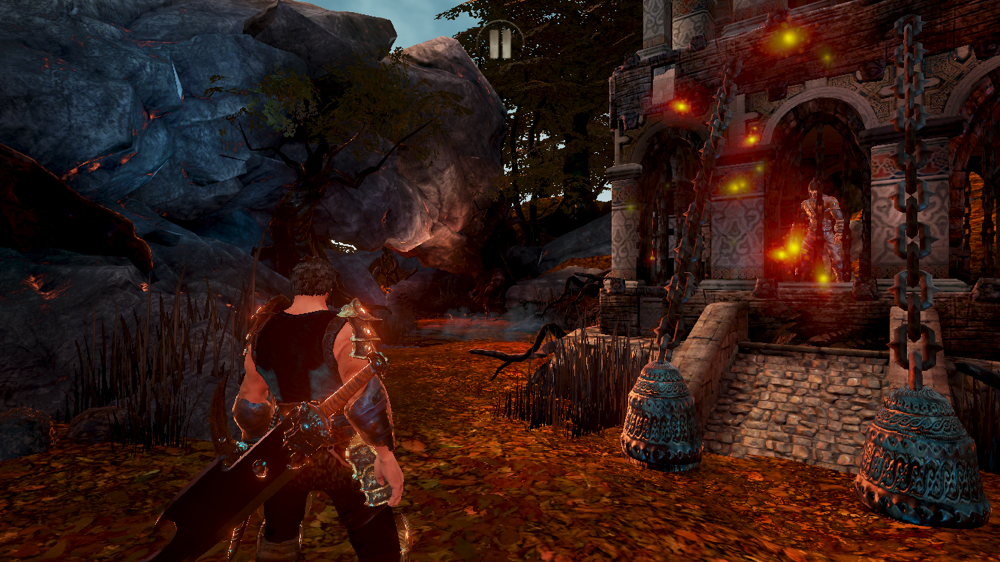 Even the voice acting gets less and less impressive as most of the enemies look and sound the same. And on top of it all, there’s no New Game+, no rebirths like you see in Infinity Blade, which turns a short game into an endless one. When I reached the end of Epic of Kings and pressed “next level,” it just brought me back to the final boss battle. Replaying old battles is uninteresting, as I can slice through earlier enemies with no effort.

The game tries to do something a little different by adding the occasional simple rotating tile puzzle, reminiscent of Godfire: Rise of Prometheus. I’m a puzzle fanatic, so I’d gladly take some puzzles in my action games. But they need to be interesting! Including puzzles that my cat could solve is just insulting. If you only have a handful of puzzles in a game, make them memorable, and not because of how uninspired they are. 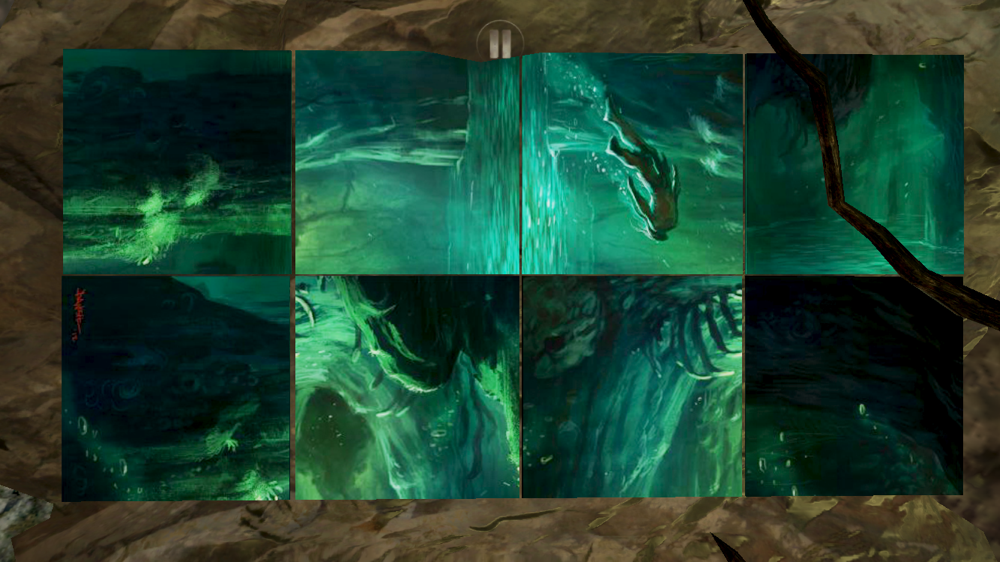 Probably the most original thing the game does is when it pits you against two enemies at once. You still only fight one at a time, but they alternate. This means that if one is stunned, the other might take his place so you can’t destroy the stunned one. With these battles, it finally felt like the developers were trying an idea of their own and not simply making a watered-down Infinity Blade. Unfortunately, it’s not enough to rescue the game from mediocrity. 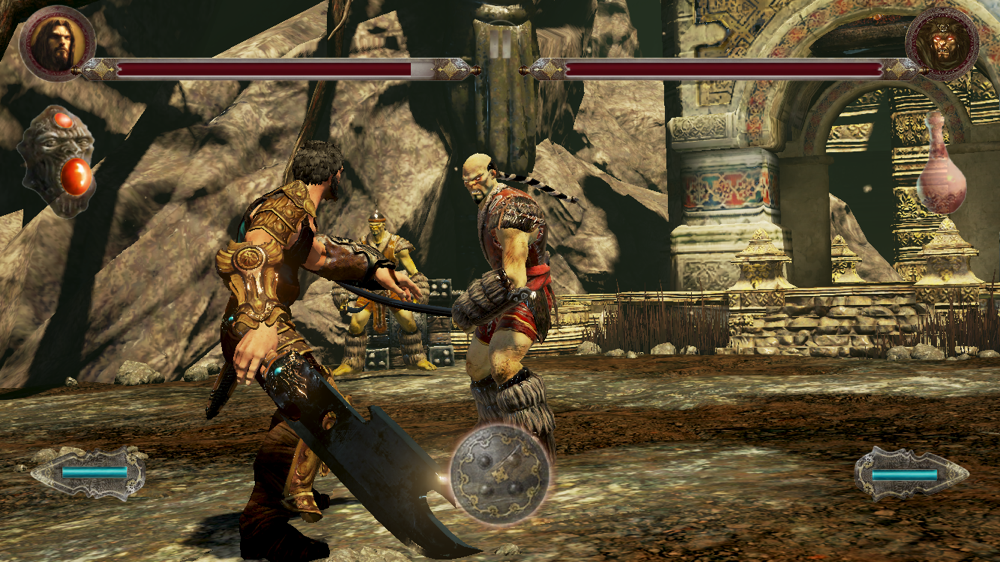 Here’s some additional gameplay videos I made if you still need help deciding: