I recently had the privilege of attending the 13th annual Games for Change Festival here in New York City. At the same time that the United Kingdom gave into fear-mongering and voted to break off from the European Union, I was listening to game developers talk about how they’re reaching people in a positive way through their creations. All over the world, communities are making rash decisions based on fear, but some game developers are trying to build bridges and break down walls through empathy, understanding and shared experiences.

Having just played the iOS port of iNK Stories’ 1979 Revolution, I was excited to hear the company’s co-founder, Navid Khonsari, talk about using games to create empathy. He explained that he told his documentary-like story of the Iranian Revolution with this medium because he wanted to put people who weren’t familiar with the revolution in the shoes of someone who went through it. He believes that an interactive narrative sticks with you longer than something like a movie. Also, by giving players choices, and having no wrong or right answers, the game leads to more discussions. This has resulted in important conversations between such diverse groups as Muslims and Mormons. Forty interviews were conducted to make sure they got the facts straight and the game would be historically accurate. Sadly, it got banned in Iran a couple of months ago, preventing people who could benefit from it the most from accessing it. I myself knew little about the Iranian Revolution before playing the game, but walking around and having to make quick decisions — such as whether or not to throw a rock at soldiers — helped me feel like a participant instead of just a viewer. And due to the strength of the script and characters, I came away feeling like I understood these people better, without having any one viewpoint shoved in my face.

Drew Davidson, the director of the Entertainment Technology Center at Carnegie Mellon University, spoke about Never Alone, the collaborative effort between game developers and a Native Alaskan tribe of I╬ô├╢┬ú╬ô├╗├åupiat people. E-Line Media said straight up front that they knew nothing about the subject matter. Instead of trying to force the game to fit their own narrow understanding, they worked together with the people who knew it best. Davidson talked about how it took six months for the two teams to trust each other, but the end result was worth it. He said that “diverse teams create conflict, but also creative sparks.”

Games Bridging the Israel-Palestinian Conflict and Beyond | Justin Hefter

Justin Hefter of Bandura Games spoke about using games to deal with the ongoing Israeli-Palestinian conflict. He started off the talk with a small demonstration of how, despite our differences, we can find that we have things in common. He asked the audience to choose between chocolate or vanilla ice cream and then had each chocolate lover introduce themselves to another chocolate fan, then the same for vanilla. In a room full of strangers, we were able to find at least some small thing with which to relate to each other. He then went on to explain that video games can help us recognize our similarities. According to Hefter, cooperative team-based gameplay is the most effective at creating empathy, and the two players’ hearts even beat as one. He talked about visiting both Israeli and Palestinian schools and finding that eighty percent of the students have access to games, especially on mobile devices. Most of them play non-violent games and very similar games. He believes that we can connect more people through gaming, and it appears he’s successfully done that. He explained how his mobile cooperative running game, Partner Run, helped build friendships across different continents. In it, players run together over, under, and around obstacles, like in Temple Run, but you can save your friend when they miss a beat. In schools, kids also responded well to a cooperative board game version of Temple Run. 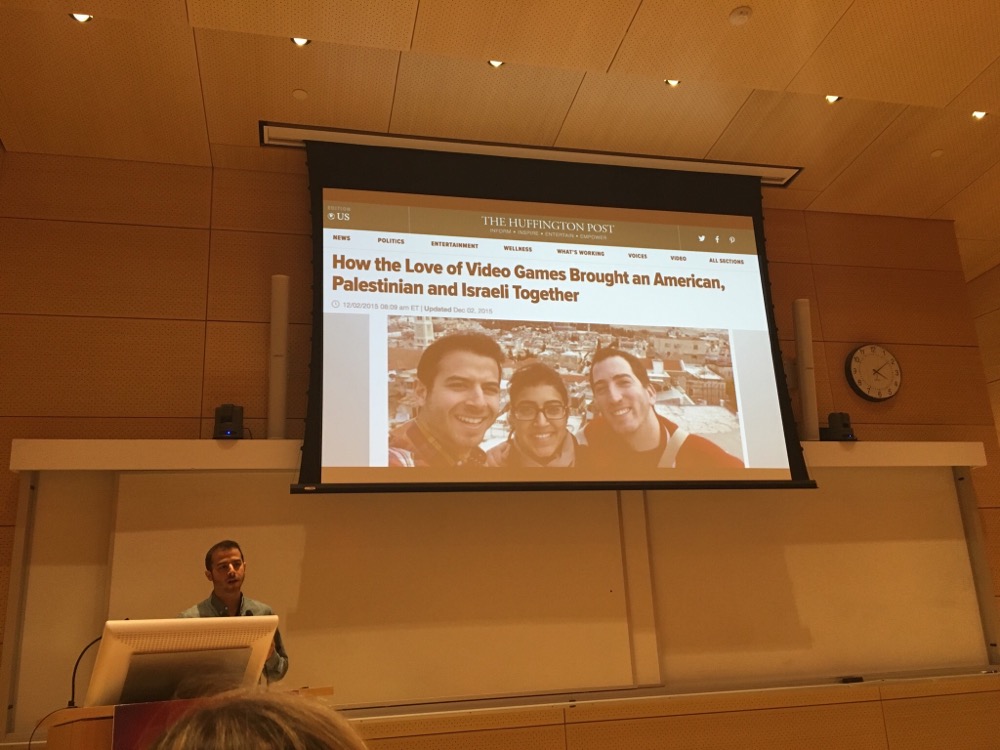 Sam Barlow spoke about genre on the one-year anniversary of his award-winning (and my 2015 Game of the Year), Her Story. He said that Her Story appealed to people who don’t normally play games because it was recognizable and easy to interact with. He wants to reach broad audiences with interesting stories and lamented that most big-budget games have a very narrow set of genres and characters that they deal with, when compared to books or movies. He is now working with the interactive video company, Interlude, to reboot the WarGames movie as a sort of choose-your-own-adventure. I do wonder if an interactive movie might have been a better choice for games like 1979 Revolution, as I found some of the gameplay elements a bit forced. Perhaps interactive full motion video (FMV) documentary-like experiences are the way to reach modern audiences in a meaningful way. As Barlow pointed out, FMV games enable more character work, more dialogue-heavy pieces. He also believes they can reach bigger audiences, as people who don’t play many games can easily get into something like Her Story or an interactive movie. He also thinks that it’s a richer experience to play as someone different than what you’re used to. He talked about how exciting it was to play a female character when he was a kid. It’s less interesting to think about what you would do in a situation than what a specific character would do.

Earlier this year, I played an interactive movie called Late Shift, by CtrlMovie. It wasn’t quite on the level I would like to see of interactive media, as the storyline was a bit hokey and its deepest moments were reflections on choice. But on a technical level it was high quality, and I can really see a serious, educational topic being explored intelligently and effectively using this medium. In the hands of people like Sam Barlow or Navid Khonsari, I think we’ll see some truly great work that can appeal to a wide audience, both for entertainment and educational purposes.

How To Be Better at Sex (in Video Games) | Robert Yang

I almost didn’t attend Robert Yang’s talk, because I wasn’t sure I needed to listen to a half-hour speech about sex in video games, but I’m glad I did. We don’t often come across sex in iOS games, but I could see some of Yang’s works fitting the platform well. One that stood out to me was Triad, a puzzler in which you move bodies around so they can all fit comfortably on the bed. But if you’re not careful, they’ll bump each other off. I’m not personally interested in pornography or games that mimic it, but his games appeal to me because, as he explained, they show the awkward, weird, uncomfortable and humorous sides of sex, not just perfect sex. I’d never thought about it before, but it seems that games can be a great way show people that their awkwardness is normal, that sex isn’t always the way Hollywood depicts it. And that’s just one more thing we all have in common. 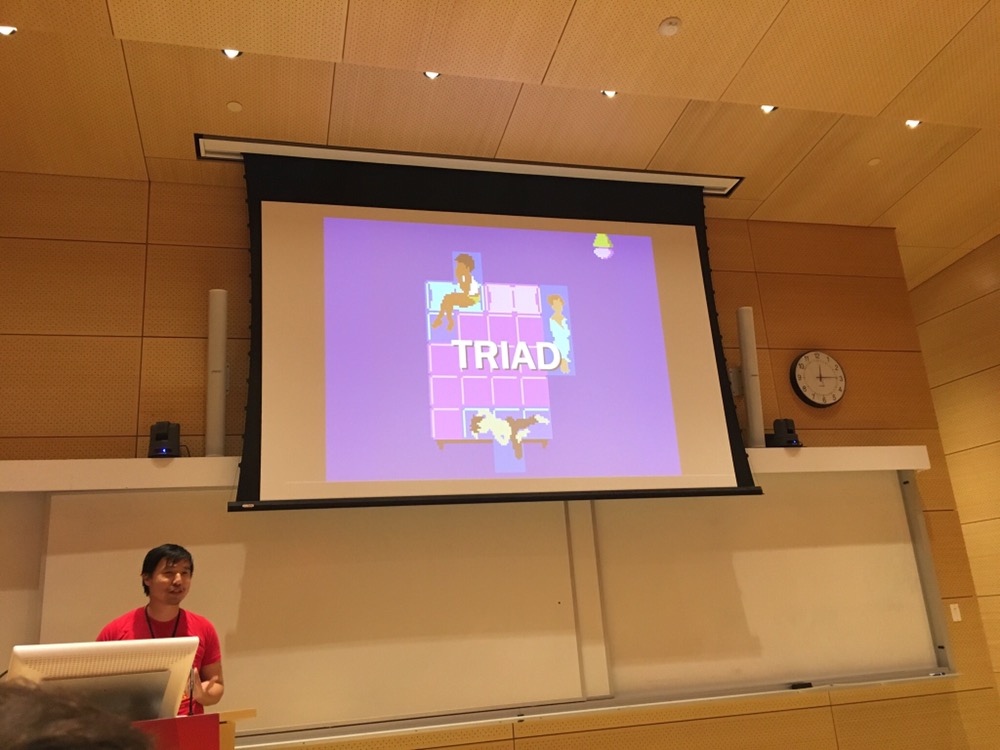 Give Me Your Gun: An Interactive Theater Experience

Give Me Your Gun was a live interactive theater experience made in collaboration between Games for Change and a graduate student team from Carnegie Mellon’s Entertainment Technology Center. It was about a woman who is surprised to find a gun in her friend’s handbag and approaches her about it. Using our smartphones, audience members were able to type in questions for the two actors and then vote on the ones we wanted them to use. The questions with the most votes would show up on the big screen in front of us and the actors would use those next. It was a collaborative mystery game, as the goal was to ask the right questions to help Linda unlock key bits of information and eventually get Mary to give up her gun. I really liked the concept and even found the subject material an interesting choice, what with gun control being such a hot topic right now. Unfortunately, the software had a few issues and the script itself wasn’t always strong enough to hold the attention of the audience. This led to silly questions getting asked and even up-voted, and audience members couldn’t help but chuckle, the laughter spreading around the room. It was hard pull the show back from all that, and it even caused one of the actresses to break character to address the audience. But despite its few kinks, I think it’s a great concept and would love to see the technology used in more shows. Just about everyone has a smartphone these days, so I think including the audience in the show in such a highly interactive way has huge possibilities. If done right, it can be a very powerful but entertaining way of reaching people. 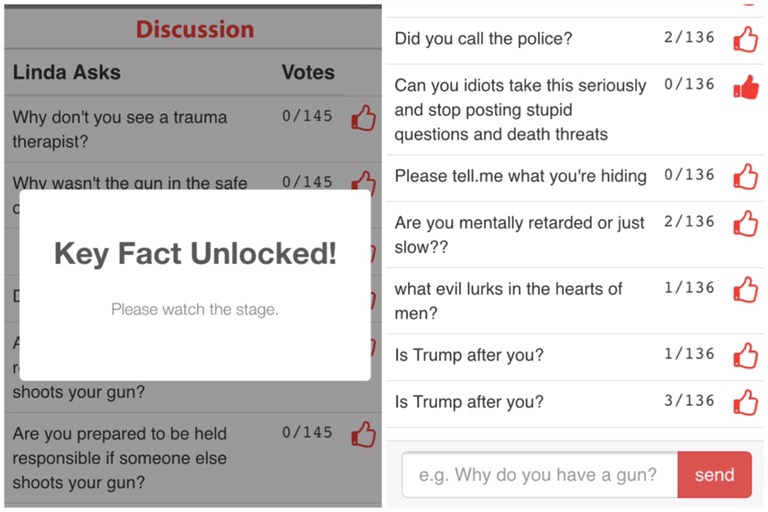 I don’t pretend to know the answer to dealing with terrorism, growing income inequality, mass shootings, or other horrific and complex issues we’re facing today. But perhaps games can be a medium, in a time of sound bites and short attention spans, to educate people on issues before they create another piece of history we must learn from. Either way, it’s great to see developers thinking outside the box and trying to build bridges with their games. Instead of strengthening messages of fear and hate, they’re helping us understand each other better through interactive media.