After playing and thoroughly enjoying Telltale Games’ and Nightschool Studio’s Mr. Robot text-based TV show tie-in game, I was excited about another interactive fiction game, KOMRAD, by Sentient Play. I don’t play too many of these real-time games as I tend to forget about them or lose interest when I’m forced to wait hours for something to happen. I usually move on to other games that let me just play on my own schedule. For a game like this to grab my attention, it has to sound unique, like it’s doing something very different. KOMRAD is a game in which you chat with an artificially intelligent computer from the Soviet Union that’s been forgotten and alone for thirty years. It’s by the former Chief Design Officer of IBM Watson and claims to be “based on fundamental principles of real AIs and chatbots.” So it definitely fits the bill of unique, at least for me.

I dove into KOMRAD knowing very little about it. I was hoping to be surprised, and my first play-through did not disappoint. I was told through some anonymous texts that I’ve been hacked by criminals who stole my identity and are planning to use my name and resources to commit crimes. But these same criminals are looking for some codes on an abandoned computer. The idea is that if I can get this intelligent machine to give me the codes, I can exchange the info for my freedom. So my task was to convince this computer that’s been alone since 1985 that I’m someone it knows and can trust. And I failed miserably. I didn’t even make it through the first chapter of the game. I got a bad ending after just twenty minutes. But I loved it. It was a fun bad ending. Basically, “you’re thoroughly screwed. Goodbye.” I used to read Choose Your Own Adventure (CYOA) books as a kid and loved finding all the different bad endings, possibly even more than getting a good ending. Once I knew that there are multiple endings, I was eager to jump back in to unlock others.

Thankfully, replaying the game isn’t horribly tedious. This is due to a couple of factors. First, the game is broken up into chapters. Once you reach a chapter, you can always go back to it and skip the earlier ones. This means you can try to make different choices at a specific point in the game without having to read through everything again. This made it feel more like a real CYOA book to me, as that’s how I would read them as a kid — fold the page and go back to it when my current path leads to an ending. And second, there’s a Fast Mode you can turn on in the settings that allows you to play the game in one sitting instead of in real time. This was perfect for me, as once I got sucked in, it was able to hold my attention. A forced break might have broken that connection. And, while there are certainly points where it makes sense to be waiting an hour for the computer to do something, it’s not as believable as in games where you’re texting a person. This computer has nothing else to do and no one else to talk to, so why would it make you wait? The bottom line is, I was glad to be able to play on my terms and I wish more games like this offered the option. I don’t often bother playing through a game like this more than once because of the real-time aspect. But I played KOMRAD enough to get all but one ending (more on that later). 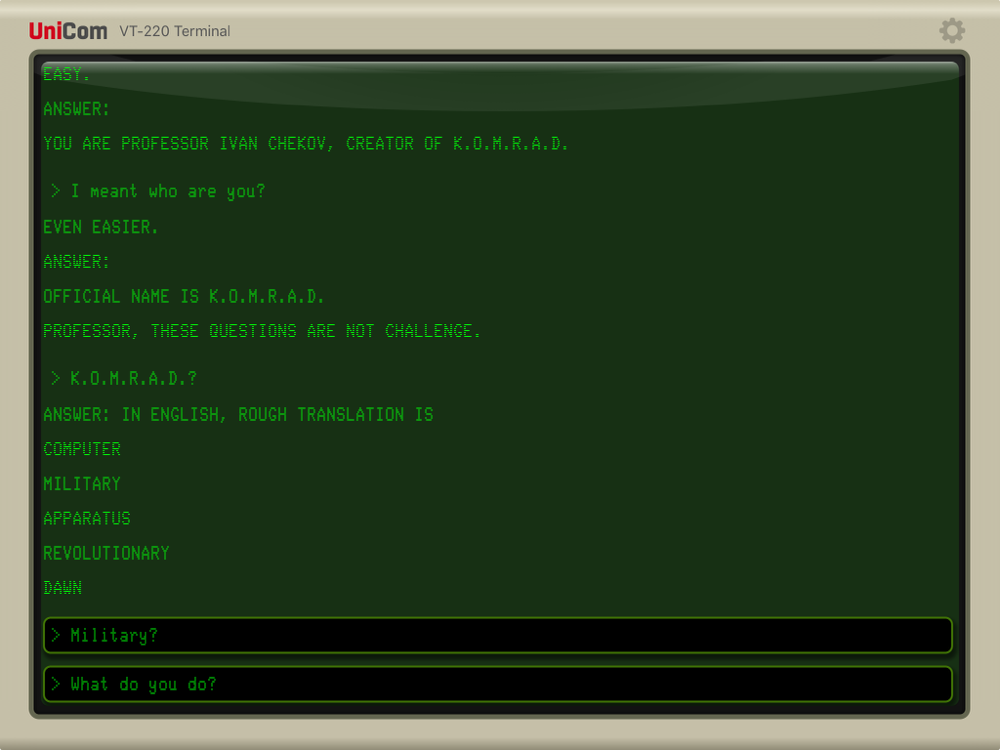 I got a few more bad endings before I reached the good one, and they were certainly varied. I was enjoying learning about KOMRAD and the people who built him. The game got some chuckles out of me when it provided some obvious social commentary and occasionally even made me think about serious matters, such as whether Communism can ever work. But I can’t help but wish there was more here. I wanted it to be a deeper game, something that would really mess with my head, get me thinking about it long after I finished. But aside from a few reflections on human interaction, artificial intelligence, and nuclear warfare, most of the game felt pretty shallow. I mean, it’s obviously deeper than a lot of games out there, but there was still so much wasted potential. While certainly more satisfying than The Westport Independent, it left me with a similar ache for it to be more fleshed out. 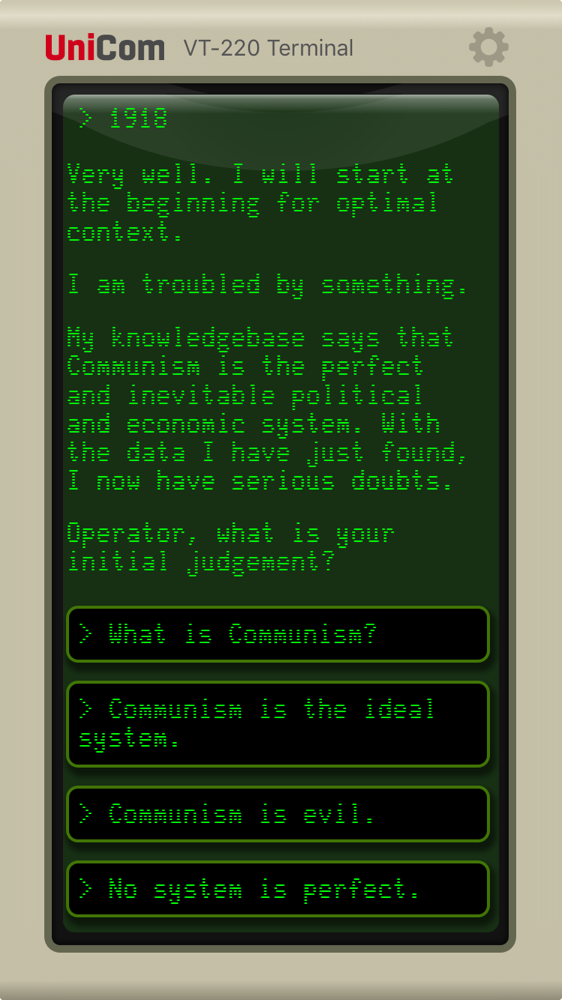 Certainly, part of the problem is some inconsistencies in the writing. Some choices seem like they should have an impact (such as choosing between scrapping KOMRAD’s new history lessons versus improved language) but they have the same results, which is disappointing. The first play-through, except for a few specific parts of the game, you won’t really notice that your choices often don’t matter. But the game has eight different endings, so it wants me to replay it that many times. The story and dialogue don’t hold up well to scrutiny when you play it that much. Perhaps playing through the game once and leaving it at that would be a better experience. It’s on multiple play-throughs and choosing different options that the game breaks down. When you start seeing that your choices only matter when they lead to a specific ending, even past enjoyment begins to get questioned. I started to wonder, was that bit that seemed clever at first really as clever as I thought? It’s strange for the game to strongly encourage multiple play-throughs but not ensure that the writing holds up. 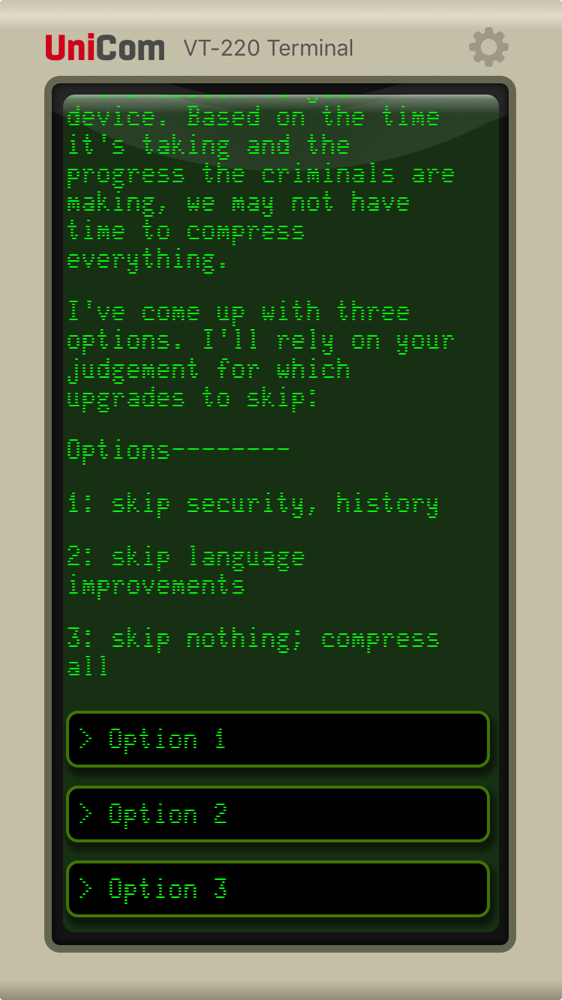 Furthermore, some things don’t hold water even on the first play-through. For instance, KOMRAD says it doesn’t know what the Internet is, but then says it has “Internet addresses” in almost the same breath. And at one point it asks some questions to determine your compatibility with it. On one of my play-throughs, none of my answers had anything to do with money, but the computer said I have a “possible obsession with wealth.” Considering there are choices related to greed and I chose none of them, that made no sense and pulled me out of the moment. I got more generic feedback on other play-throughs with different answers, even when I did choose the greedy option. It’s hard to stay immersed in the game when something so simple is overlooked. Or perhaps it was intentional. I don’t know. But it made my choices seem shallow unless they were the ones that specifically led to alternate endings. And I’d be fine with the fact that most answers don’t change the outcome. But the immediate response should at least be related to what I answered or it rips me out of the moment. 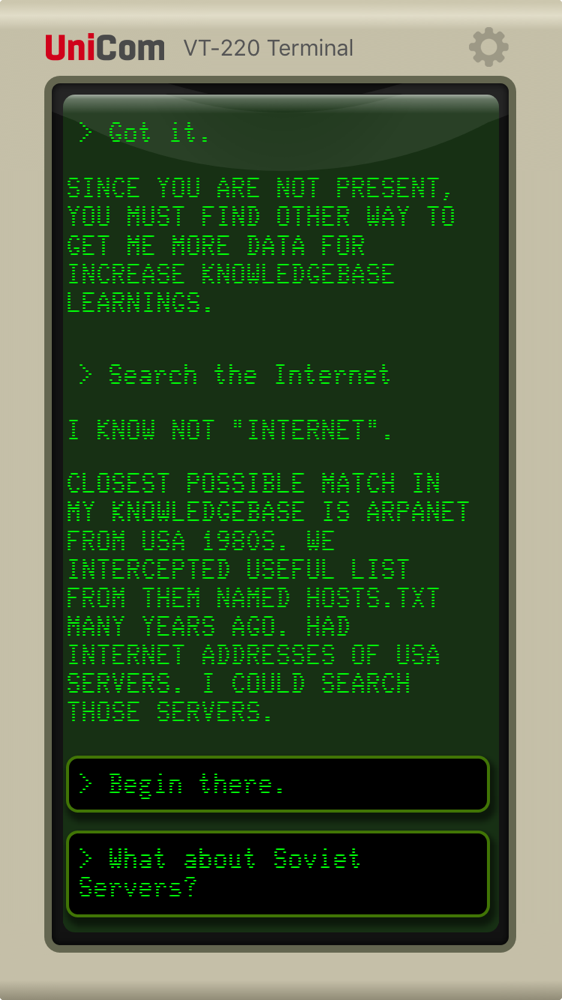 I played on both iPad and iPhone and found they both were a good fit. It’s also playable on the Apple Watch, but I don’t have one to test it on. There’s no iCloud, but it’s not really needed since each play-through is pretty short. But the game is a bit glitchy at the moment. It crashes right before some of the endings, so the GameCenter achievements don’t register. You can still re-open the game and see what ending you got, though. And the developer has an update coming that should fix that. Perhaps more problematic is that there is one ending I’m still missing altogether. Unfortunately, the only path I hadn’t chosen yet that I could think might lead to that ending, kept crashing the game on the same answer. So that ending might not be achievable until an update fixes it. Also, the screen jumps around a bit. You can see for yourself in the video I posted above. When KOMRAD is typing, the lines will jump up and down the screen, making it a bit hard to follow. Hopefully that’s something that can be fixed in the future, as it seems like an unnecessary frustration. 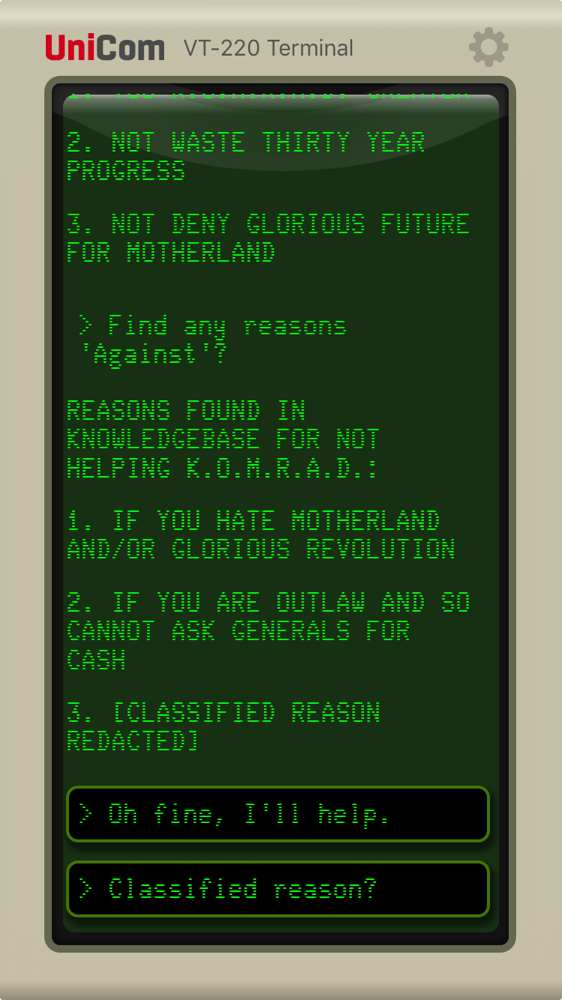 When I got the good ending, it took me a bit to realize that’s what it was. It felt a bit abrupt, and I was expecting more. The game does say there will be more, but whether it’s a sequel or an update is unclear. As is, I found that ending a bit underwhelming. That said, I would like to see more from this developer and find out what happens to KOMRAD in the future. I have absolutely no idea what their plans are after the way it ended, so I’m curious to see what they have up their sleeves. Perhaps this is just the beginning and the sequel is where the story will truly shine.

When KOMRAD works, it’s quite enjoyable. I can’t say I regret playing. Far from it. It’s certainly different, and I don’t feel like I wasted my time on it. If you play on Fast Mode from beginning to the good ending, it’s only about thirty to sixty minutes long. So it’s a short experience unless you go back and find all the endings. KOMRAD has some great ideas and is well-written most of the time. But it ultimately feels rushed, like it’s not living up to its full potential. I really wish there was more to it. I liked the ideas, the writing and the layout, and there were definitely some surprises that made me chuckle or think for a moment. I just wish it could have stayed strong through the end. I enjoyed my time with it and would recommend it to those looking for something different. I just feel like it could have been more. If you’re looking for a unique interactive story and can overlook its shortcomings, give KOMRAD a try and download it here.