This is a walkthrough guide with hints, tips, tricks and strategies for the iOS, Android & PC game Dog Sled Saga by Dan FitzGerald. Feel free to ask for extra help in the comments section.

Note: I’m playing on the iOS version, so there might be slight differences in the other versions.

You get to choose three dogs in the beginning. These will be your only dogs for a while, so choose wisely. Don’t worry about names, though. If you see a name you like but don’t want that dog, you can always rename another dog.

The main things to focus on are:
1. Do you like the breed?
2. Variety in gender — try to grab at least one male and one female so you can breed them later on.
3. Variety in personality — Each personality (Strong, Steady, Obedient) has an affinity for different positions in line. If you get one of each kind, you should have a pretty balanced team.

Eventually, you’ll want one solid Wheel, one solid Lead, and three Middle dogs that you can use for the 5-dog races.

Then you can rename and change the harness color as much as you want.

This game is as much about managing resources as it is about racing. You need to take care of your dogs (more about that later) and manage your money so you can afford your league expenses. Every 30 days you’ll have to pay these expenses in order to continue racing (and playing altogether). If you can’t pay your bills, your only choice is to remove a dog from your team. That will lower your bills, since you have to pay more for each dog in your kennel. 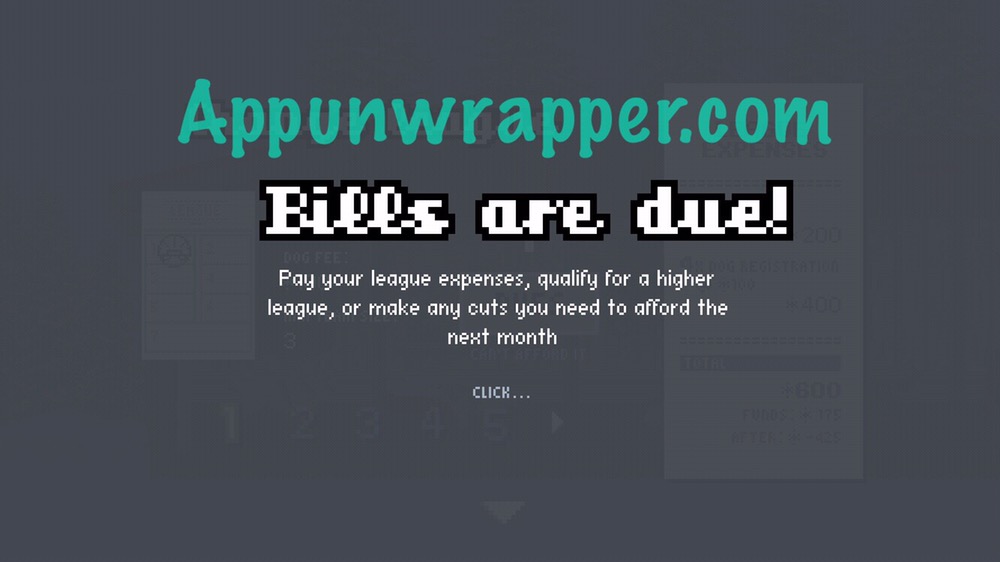 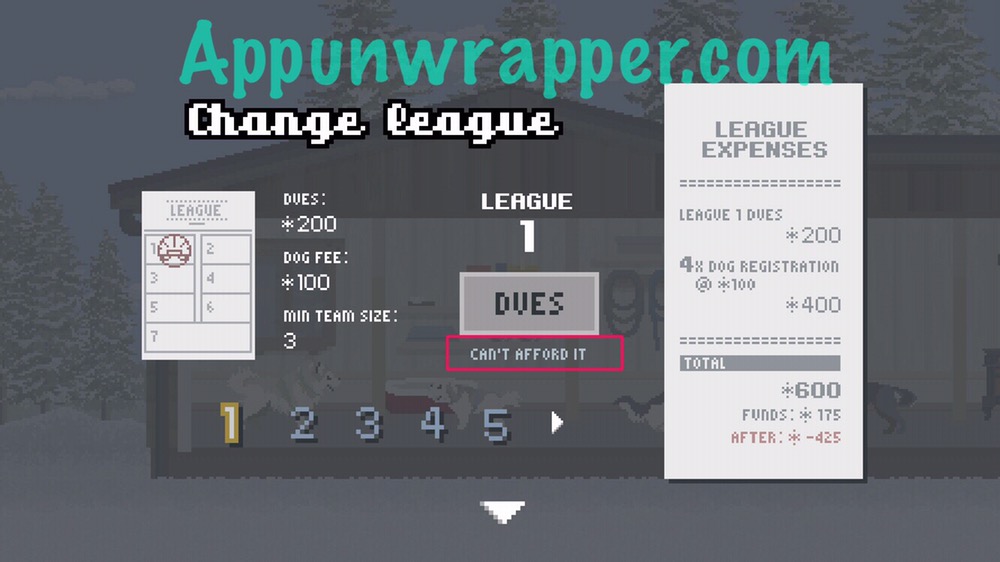 Releasing a dog is not something you want to be forced to do, though. I learned this the hard way and threw $2000 away recruiting a dog I couldn’t afford to keep. If you release a dog, you can hire it back later but it will be a clean slate, so any training and racing you did with it will be wasted. 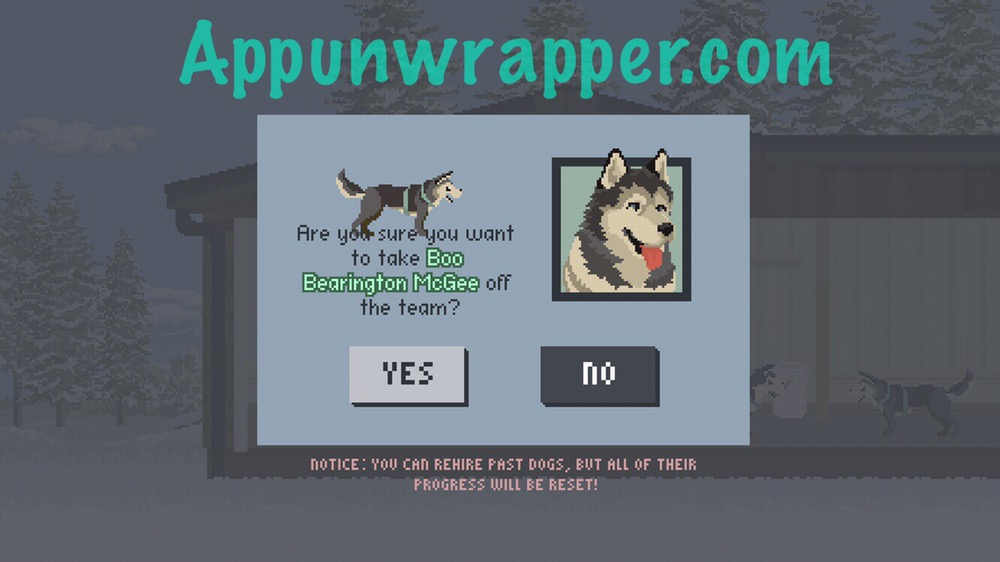 So even if the game tells you you have money to hire a new recruit, new employee or upgrade your league level, first look at how much money you have and see if you can risk it.

At the bottom of the screen you can see how much your bills will be and how soon you’ll have to pay them. If you spend money and go below that amount before you can recover it, you’ll end up in a bad situation. So it’s better to take it slow and hoard some money before spending. The league fees keep increasing, so you never really feel like you have an abundance of money, even when you’re earning $4,000 per race. 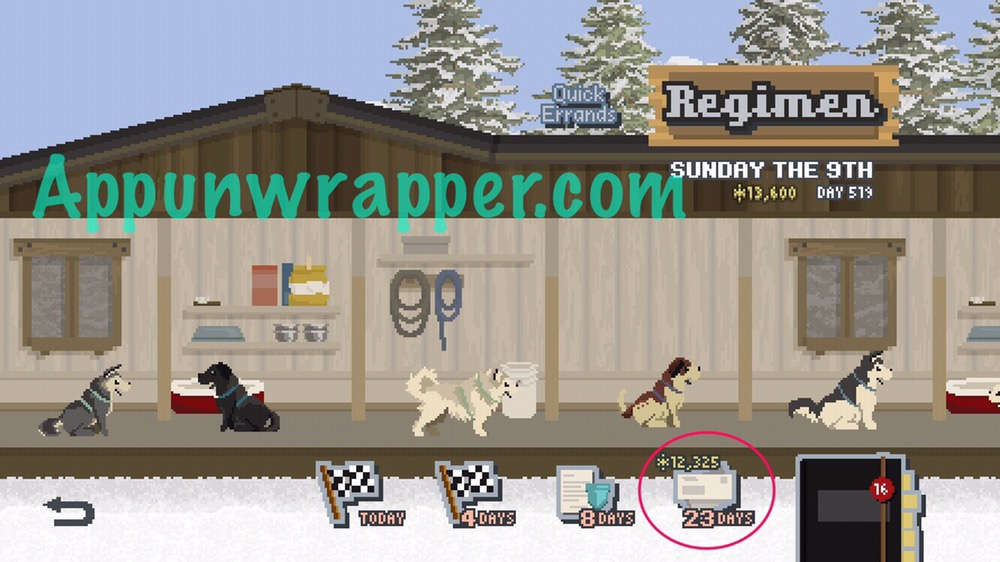 In fact, I never really felt like I needed more than five dogs. By the end of the game, I had my two Shih-poos just sitting out all the races.

You can see more about it in this video I made:

On the main screen, there are two main menus you can access. Quick Errands and Regimen. Quick Errands gives you access to the League Office if you want to see your bills or qualify for the next level
Up. You can also see the dog roster if you want to hire another dog. You can also manage your dogs from there, which is mostly needed for when you run out of money and need to take a dog off your team. Try to avoid this! You can also manage your staff, which involves hiring new employees or firing existing ones. You can also customize the color of your sled, manage your sponsors, and breed two of your dogs to get a puppy.

The Regimen button allows you to choose what to do with your dogs for the day. Do you want to train them, care for them, or race them (when a race is available?). You don’t have to race every race available, but skipping a race will mean you lose out on money. As long as your dogs are in good shape, it’s best to race all races. But if they need rest to perform, give it to them. 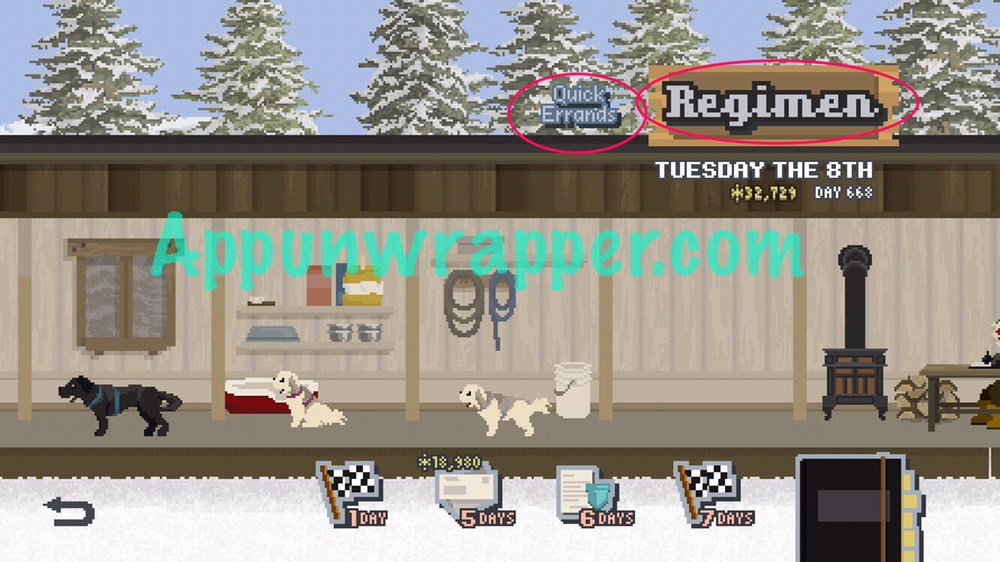 The main action in racing is throwing treats to your dogs. Without food, they’ll get exhausted, slow down, be very unhappy and probably lose the race. That will cause you to miss out on money and possibly cause trouble down the line for you. You want to keep your dogs happy and well-fed.

So, when do you feed a dog? When you notice him panting. It could be hard to notice, especially on a small iPhone screen, so you want to pay close attention. When you see a little puff of air coming from his mouth, tap and hold the screen until the arrow points directly at him. If you over- or under-shoot and miss, you’ll waste the treat. So don’t miss too often! If a dog stays hungry for too long, he may get fatigued and require more rest after the race.

As you race, you’ll come across treat refill stations. Passing one automatically refills your bag.

When you see a warning sign that an obstacle is coming up, tap it three times to make all your dogs jump over it. 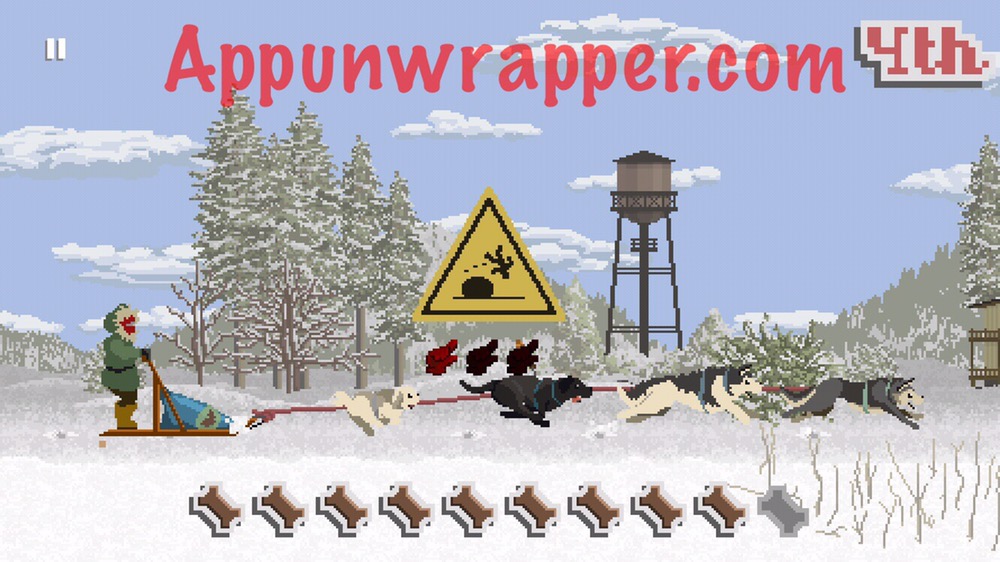 If a dog starts getting tired, its rope might get slack. It will start flashing red. To tighten it up, swipe the dog to the right. You’ll see a little red arrow as you do this. If it doesn’t get fixed, it could get knotted up, at which point you’ll need to tap on the dog until it unknots. You can pull the dogs to the right even when the rope isn’t flashing, just to be on the safe side.

If you see a sign that a tree is coming up, it means there will be a tree soon that interferes with your treat throwing. It’s best to wait until you pass the tree so as not to waste any treats. But sometimes there’s enough time to get a throw or two in before you get to the tree. Short throws to the dog closest to you are the easiest to pull off at this point. Use your judgment! 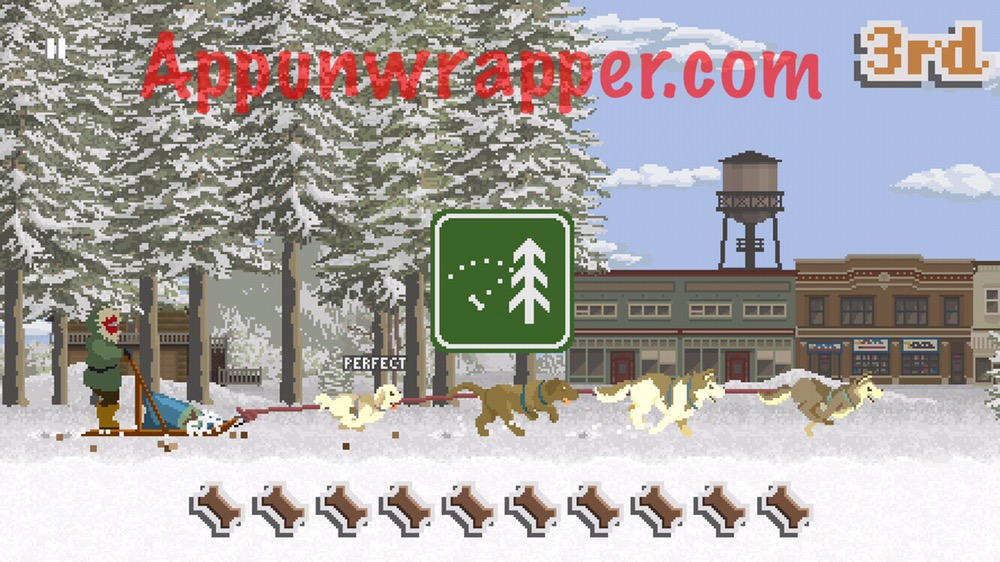 Every once in a while, a sponsor will offer you a perk. This can be a good bag upgrade so you can hold more treats,bless friction on your sled, or even funding that covers some of your bills. But the catch is you can only hold three slots at a time. Some sponsorships take up more than one slot, so ideally you want ones that only take up one. Then you can have three different sponsorships. You can’t hold any for later use. You either have to use it or get rid of it. 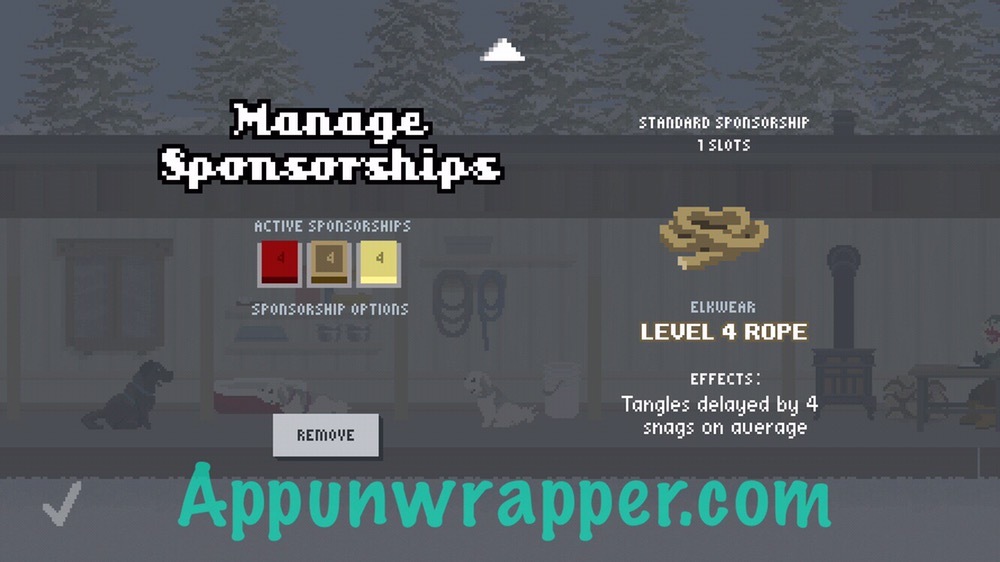 Your dogs always get a little fatigued after a race. Depending on how well you took care of them during the race, they’ll either just have one bar of fatigue or they could have more. Before racing a dog again, you should put them through Caretaking to get rid of the fatigue. Each day of Caretaking removes one fatigue bar, but it also reduces their Skill by one bar. So as soon as their fatigue is back to normal, you want to get them into Training as much as possible until the next race.

If you have enough money, you can hire employees to help you train and take care of your dogs. This means that instead of some dogs sitting idly by while you train others, all of them can do something. The employee must be paid monthly along with your other fees, though, so make sure you can afford it before hiring them! 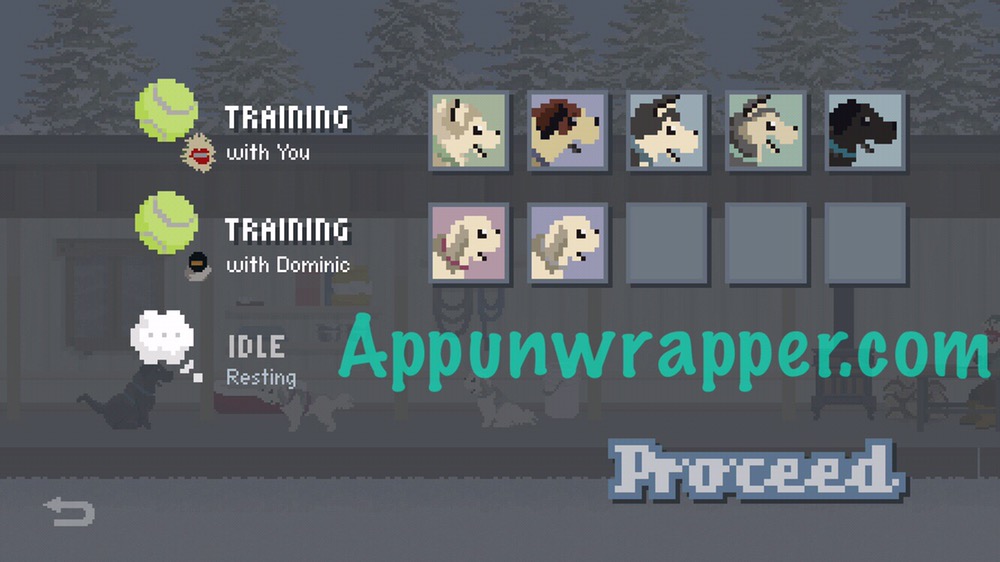 There’s some story in the game that’s told through letters about a dog named Aurora. You can access these letters at any time from the journal. But the scrolling is a bit clunky on a touchscreen, so have some patience with it.

Dogs can have special skills that will help you if they kick in. To learn about a skill you’ve seen a dog do, tap on your journal and ask Raleigh about it. The information will then be added to your journal so you can access it at any time.

Dogs can also have faults, which act negatively on a race. Like skills, you can ask Raleigh about them.

You can only hire four dogs with the original kennel. If you want to hire more than four dogs (for racing five dogs later in the game), you’ll need to expand your kennel for $8,000. You can take two more dogs for each expansion. Just remember that more dogs will increase your monthly bills!

If you have a male and female dog, you can breed them together to get a puppy. The pup will usually be the breed of one of the parents, and the skills and faults will most likely come from their pool as well.