If you’ve been following me for a while, you probably know that I’m a big fan of match-three games, but not the kind that you see in abundance in the App Store. I prefer the deeper games that rely on skill (and a bit of luck), where you can’t buy your way ahead. Since most match-three games are free with timers and pay-to-win in-app purchases (IAP), I perk up at the slightest whiff of a game without any of that nonsense. The hardcore match-three RPG, Hero Emblems, is one of my favorite games ever, and I even made a list of IAP-free match-three games that are worth playing. I’ve added the new Swap Sword, by Alec Thomson, to the list and I’ll explain why.

As the title of the game implies, you make matches of three or more by swapping tiles. Anyone who’s played a few match-three games should be familiar with it, so it’s easy to jump right in. But what makes Swap Sword so unique is that it’s a roguelike where the board itself is the dungeon. In most RPG match-threes, the hero and enemies are at the top and you match tiles to dictate what your hero does — such as attack, heal, defend, use magic, and so on. But here, the enemies are match-able themselves, and your hero can move around and be killed by her surroundings. You can either swap a tile to make a match of three or more, or you can swap your hero with any tile, even if it doesn’t make a match. But either one counts as a move. The goal is to first match enough keys to get the exit to appear, then rack up as many points as possible and get to the exit before Death arrives and, well, kills you. While other enemies can injure or even kill you, they can be defeated in a number of different ways. But Death cannot be defeated, so if she catches up with you, it’s game over. Once the exit is on the board, each move you make brings Death one move closer to arrival, so you can’t just match willy-nilly, hoping for the best. 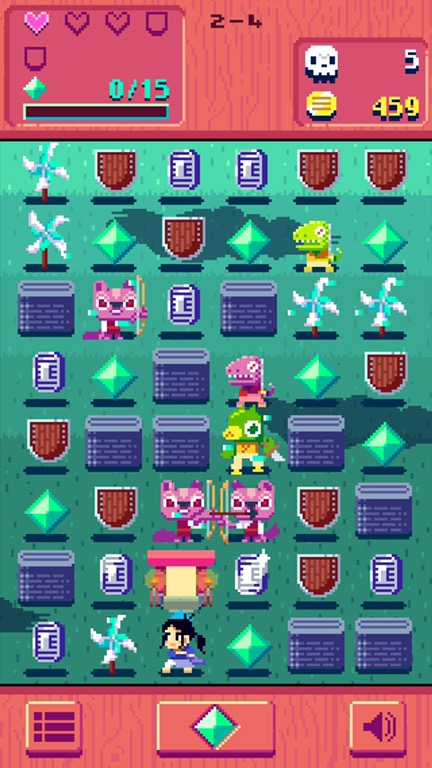 Every match you make changes the layout of the dungeon and each type of tile serves a unique purpose. For instance, once you unlock the door, future key tiles are replaced by coins. The exit also drops down from the top and can be moved around by enemies trying to reach you. Matching coins is how you earn most of your points towards a high score. Then there’s mana, which allows you to use your skills, and shields refill your shield icon so you can take some damage without losing health. Each of the three areas also have special tiles like dynamite, windmills or ice. These special tiles make each area feel very different, and you need to approach each one with a new strategy.

Then there are all the different enemies. They all start as eggs, which are harmless. But the second they hatch, they become very dangerous. The basic enemy is the lizard, which can only move or attack up, down, right, or left. Their entire purpose in life is to inch closer to you one tile at a time and attack you. But they can’t pass through walls. So if they’re blocked from you by wall tiles, they’ll get confused and won’t move at all. Frogs, on the other hand, can move and attack at a diagonal, so walls don’t stop them. Archers attack from two spaces away, and fire can’t move but damages you if you get next to it. Later on, enemies come in two different colors, as well, making it more difficult to match them when they start flooding the screen. Avoiding and getting rid of them while also racking up points becomes a balancing act. 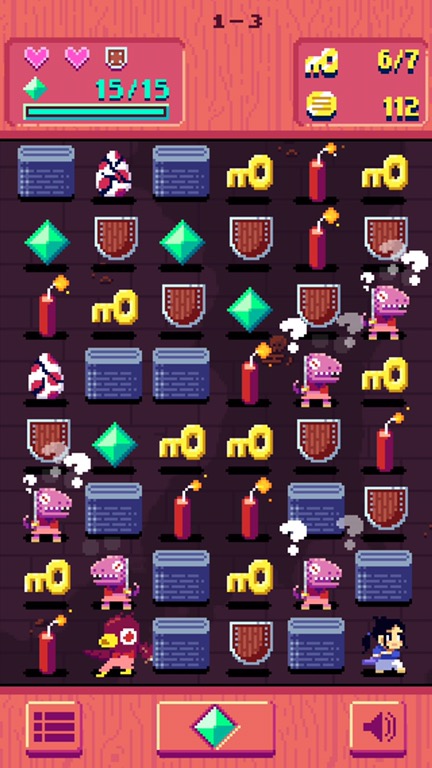 Luck is usually a big part of match-3 games, and that’s no different here. But with Swap Sword, it’s part of more than just the setup of the board. For instance, each time you make it through an exit, you get to choose from three skills or upgrades. An upgrade would be something like a permanent extra heart or shield piece. A passive skill could be something like extra max mana only while that skill is equipped. Then there are the active skills, which change everything. These require mana to perform actions such as destroying a column, teleporting to a different spot on the board, or building wall tiles around your hero. While active skills do require mana, there’s no other limit to them. Additionally, they don’t use up any moves. This makes them incredibly valuable, as they could get you out of a pinch even when death is just around the corner. The skills you choose (and use) play a big part in your strategy, especially since you can only have three at a time and are always forced to choose a new one. Upgrades can be replaced without losing the upgrade, but if you took three skills, you’ll have to choose one to replace next time you level up. And here’s where my issue with luck comes in. The skills you can choose from after each level-up are mostly random. And my highest scores have always been from games in which I got the skill that lets you turn some pink enemies yellow. This makes it much easier to match and get rid of them before they have a chance to reach you. The frogs and archers can be a real pain in the butt otherwise. Early on, you might not even notice because you’re still testing out the different skills to see what works best for you. But once you’ve played enough, you’ll learn which ones truly give you a leg up and look out for those. Without them, your score might suffer. Still, being forced to use skills you’re not used to could lead you to find a new, perhaps even better, strategy. So the luck aspect isn’t all bad. 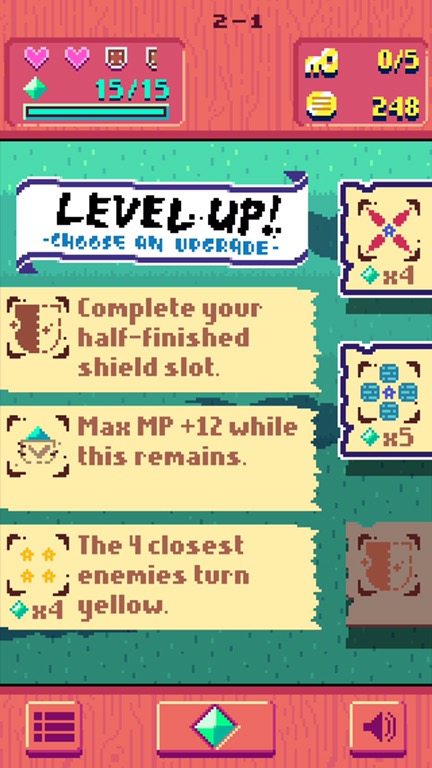 But that brings me to my other issue with the game. It’s not enough to keep me from recommending it, but it does limit its lasting power. The game consists of three areas with several floors each. If you die before completing all of them, your score is added to the “Dead” leaderboard. If you complete the whole game, your score is added to the “Living” leaderboard. Once you beat the game, your only drive to keep playing is to improve your score. The score is mostly from matched coins, and some from matching extra mana and shields, as well as slicing through coins. You don’t get points for enemies killed. An ideal strategy would allow you to delay the arrival of the exit to collect some extra points before the Death counter starts, then make the best of every move until Death arrives to collect as many points as possible. There’s a very strong risk/reward dynamic and trying to master it is perhaps the biggest draw of the game. But even with that, I’ve now played enough to get a high Living score of 1058, and I don’t really see myself trying to go for a higher and higher score, even though I do still find the game fun. I don’t really feel like I have a solid goal. Perhaps if there was an endless mode, I’d try to get as far as I can. But the way it’s set up now, even if I have a really great skill set and everything’s been going flawlessly, it’s worth nothing unless my score was higher than the last time I beat it. The victory feels worthless otherwise, and a bit of a waste of time. I would love to be able to continue until I actually die. Again, this isn’t a deal breaker, but for those looking for a game to play for a long time, you might be disappointed. 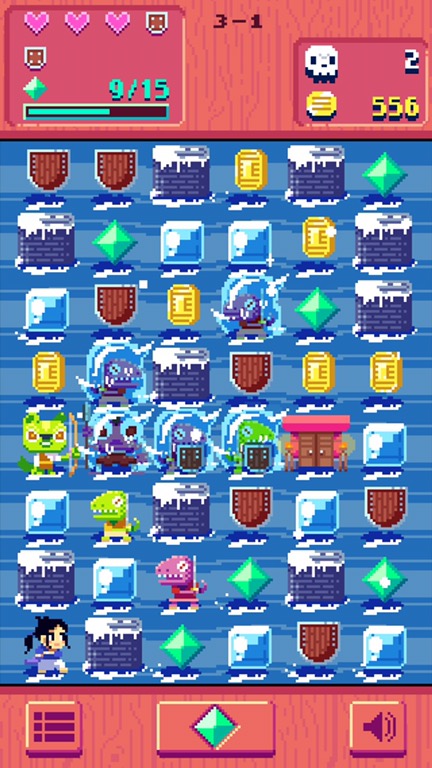 Overall, I’ve really enjoyed my time with Swap Sword. It has a lot of depth and does some really unique things that make it feel fresh, even in the oversaturated genre of match-threes. There are no IAPs or other nonsense, and it makes a great one-handed game that you can play anywhere. It even saves your spot if you close the app, so you don’t have to worry if you only have a few minutes to play. At its core, it’s a high-score chaser, so your mileage from the game will vary depending on how motivated you are to try and beat your own score. It does get repetitive due to the nature of the scoring, so it might not hold your attention for weeks, months or years unless you’re very competitive and enjoy tweaking your strategy bit by bit, sometimes being thwarted by Lady Luck. If you’re going to try to beat the game once or twice and then move on, you might not feel you got your money’s worth. But otherwise, I would recommend it to any match-three fans, especially those looking for a new twist on the genre. You can also see my video below if you need more convincing, and you can download the game here.