If you’re a follower of this blog, you probably know that I’m a big fan of point-and-click adventure games, especially atmospheric ones. I have a weak spot for pretty artwork and I love when a game can draw me in on its visuals alone. The Frostrune, a gorgeous game made by Norse developer Grimnir and published by Snow Cannon Games, is one I would have grabbed instantly based on the screenshots if I hadn’t already owned and played it ahead of release. Although I played a much earlier version of it during its beta testing stage, the game has gotten so many little improvements and added details since then that just blew me away. If you’re a fan of adventure games and are looking for something to play on a chilly winter evening, you’ve come to the right place. 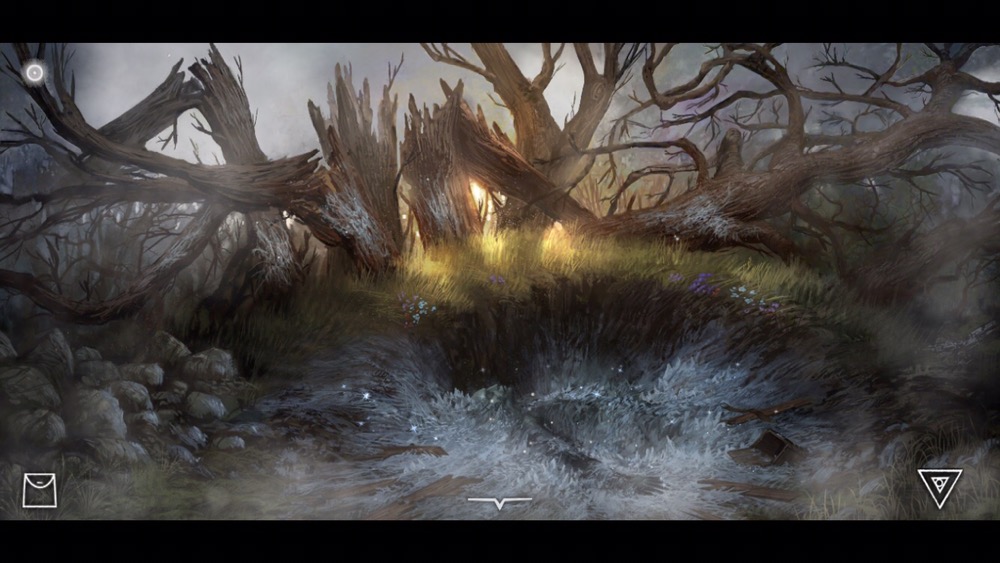 One thing that really sets the game apart is its unique setting. In it, you play a young girl named Liv, shipwrecked on a small island off the coast of Norway in the year 965. At first, the game might seem like every other first-person adventure, with a village, some items to find, nothing too out of the ordinary. That is, until a ghost asks you for a favor. This also won’t be the only ghost you encounter, as you’ll soon discover that you, as Liv, have the ability to see ghosts at will and have a very important role to play. If you’ve enjoyed games like The Lost City or or The Silent Age, this mechanic should feel familiar but unique in its own way. Instead of changing the season or going back in time, you can use the Spirit Vision to see things that aren’t visible to the naked eye. The ghosts become part of the puzzles, some asking for help while others guide you on your journey. You’ll also find runes, poems and riddles that teach you about Norse culture and mythology without pulling you out of the game. If you’re not careful, you might even learn something!

Let’s get back to the artwork again. It’s all original and hand-painted, with the animations and special effects flawlessly worked into it so nothing ever looks out of place. Scenes are brought to life through subtle effects like leaves rustling or clouds traveling across the sky, creating a strong sense of immersion. Often these kinds of first-person adventure games can feel very static, but so much life has been breathed into this world through these animations. I could play around with the Spirit Vision transition all day because it looks that good. My personal standards for first-person adventure games used to be lower, as there weren’t quite so many choices on iOS. But lately I’ve grown tired of the ones that seem to be made up of bought assets and stuffed full of puzzles that don’t really have all that much to do with the story or environment. The Frostrune feels like a breath of fresh air in the face of all those games. Even a rotting corpse is a pleasure to look at, with its maggots and flies swarming about it. The puzzles are never overly challenging, but what I love about them is how they intertwine with the story and the lore, instead of being tacked on. There’s also some symmetry to them, which I really appreciated. None of them are reflex-based, either, keeping the game frustration-free and good for all ages and skill levels. The closest comparison I can make to it in recent history is Tormentum, which was also like being inside a painting. It, too, focused less on stumping the player with its puzzles and more on using them to tell the story. Games like this stand out among all the rushed, generic-looking adventure games in the App Store. 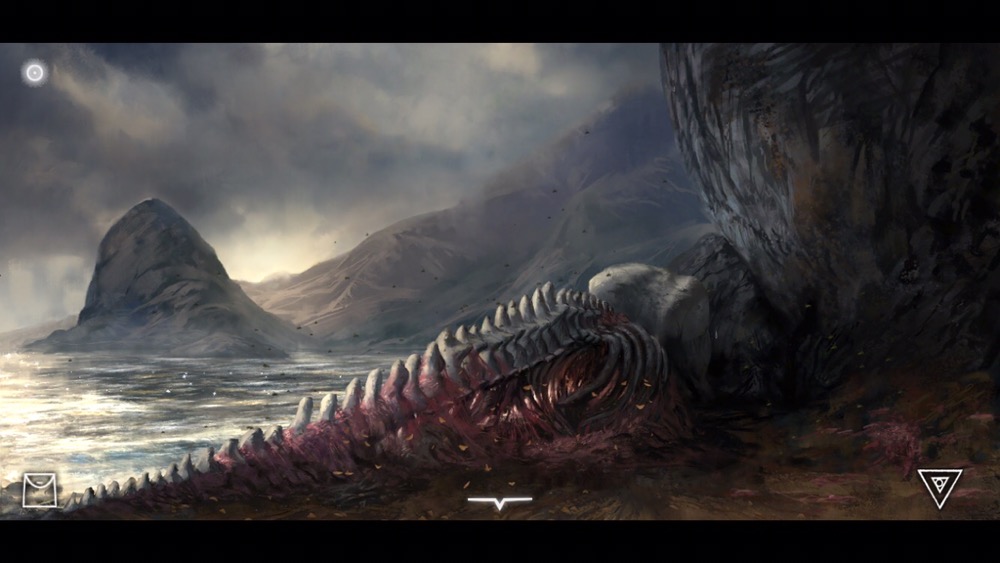 Another thing that’s really important to me in an adventure game is being able to explore easily. There’s little more frustrating than realizing you’re missing an object and that backtracking to look for it would be a time-consuming chore. But screen transitions in The Frostrune are smooth and quick, so exploring is enjoyable and never a pain. It might take a bit of time before you memorize where all the different branching paths lead, but the world isn’t so big that backtracking or getting momentarily lost is a problem. It’s also important, since once you have the Spirit Vision, you’ll want to go through each area again with it to see what shows up. And since the game is so gorgeous, going back through each screen just gives you another chance to look at all the eye candy and play with the special effects. Perhaps the game could have used an in-game camera or journal to keep note of important clues, as it’s easy to forget a poem or an image you saw a while back. If you’re playing on a mobile device, though, you can easily take screenshots and then use those when you get to a puzzle. Since the game isn’t a memory hog and holds your place if you leave the app, it’s easy to check your camera roll if you need to. Otherwise, you can just see it as an extra challenge to try and remember the details you need. 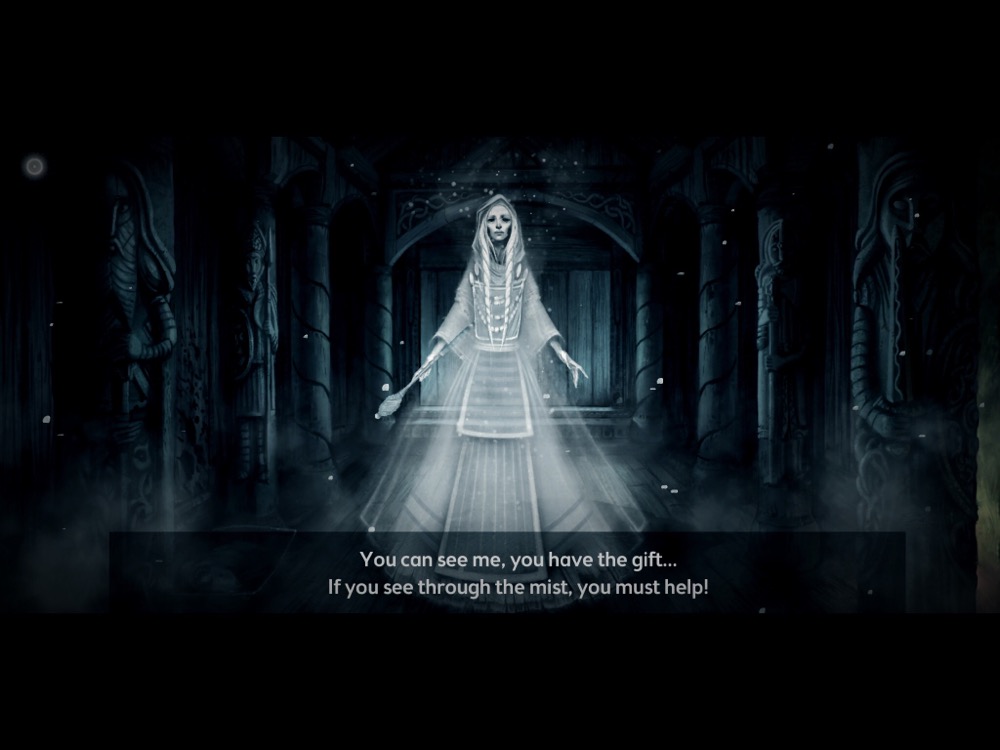 I do have one bigger issue with the game, but it’s not a reason skip it. Rather, I’m just disappointed that the game doesn’t fill the screen. Even on an iPhone, it’s so widescreen that there are black bars at the top and bottom. I mentioned this early on, but it was too late for them to change it. I’m also disappointed that the inventory couldn’t be moved to that empty space so it’s not covering the artwork and making things feel even tighter. But in the big scheme of things, these are small issues. I’ve also been told that they plan to fix that problem for the next game in the series. While the black bars do detract somewhat from the experience especially on an iPhone, it would be a silly reason not to play it. I’m mostly just sad that I can’t enjoy this gorgeous artwork on a bigger scale. By utilizing only about two thirds of my iPad screen, it defeats the purpose of having that nice big iPad. I know Year Walk did this, too, but that game’s a little pretentious and can kind of pull it off. Here, with a game that’s heavily reliant on an inventory, things feel even more cramped. In fact, the main reason I haven’t finished Fran Bow yet is because it does the same thing, utilizing only a small portion of the screen. It hurts my eyes because everything is shrunken down way more than it needed to be to fit on that screen. While The Frostrune most certainly doesn’t hurt my eyes, it does disappoint me that it doesn’t take full advantage of the full screen real estate. Even in The Silent Age, the inventory is in the black space, so it’s less cluttered. Thankfully, you can minimize the inventory in The Frostrune when you’re not using it, and I highly suggest doing so even though the game doesn’t do it automatically. 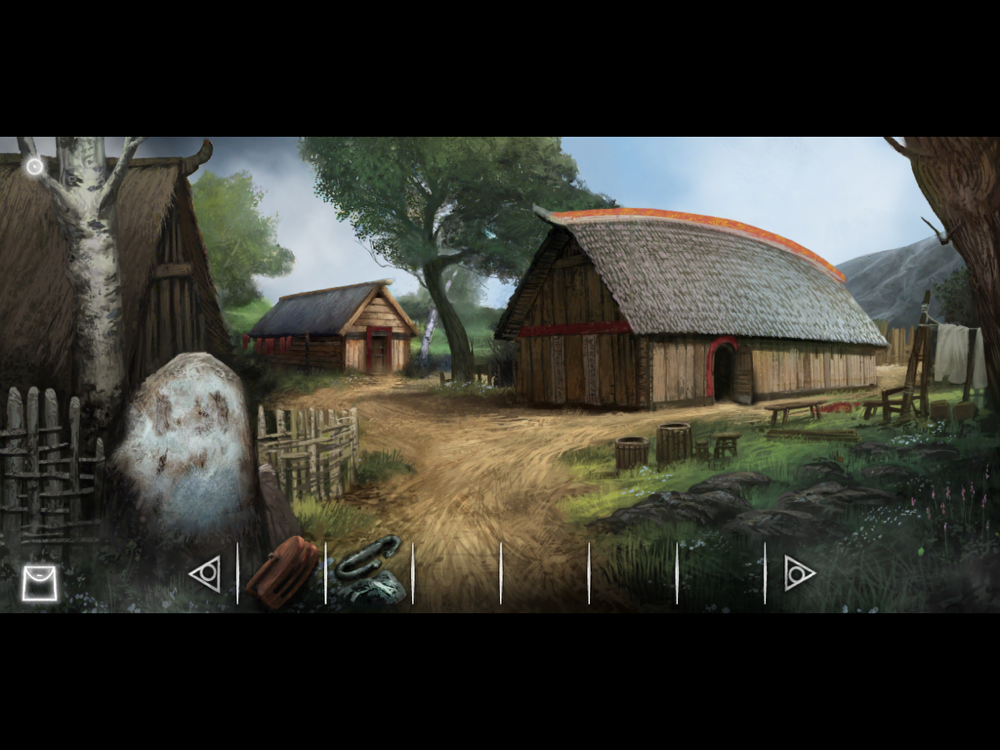 The Frostrune is not a terribly long or challenging game, but that can be a good thing, as it doesn’t overstay its welcome. It will also surprise you until the very end with its hidden secrets. I tried to keep the best parts of the game out of my gameplay videos or screenshots so everyone can experience the same thrill I did when I first played. A lot of love and energy went into making this game and you can see it every detail, from the animations to the Norse voiceovers to the atmospheric soundtrack. This is a really solid game from first-time developer Grimnir and I can’t wait to see what they have in store for Liv in her next game. I just hope it doesn’t take another four years to develop! If you’re a fan of gorgeous, atmospheric adventure games, I highly recommend playing The Frostrune. Download the game here and discover the secrets of the island.

Disclaimer: I helped test the game while it was still in production and the developer also made this website’s logo. But neither of these factors had any effect on my ability to review the game honestly.

If you’re already playing the game and need some help, try my step-by-step walkthrough guide.

My Week Unwrapped: December 11, 2017 – Reigns Her Majesty, QB, Getting Over It, Escape Hunt, Agent A and More