Hi everyone! I’m back yet again with My Week Unwrapped to tell you what I’ve been playing all week. This week was a bit on the quieter side compared to the last month or so. I’ve also been playing some pre-release games, which I’ll mention briefly but will talk more about once they’re out.

One of the reasons I haven’t played too many new games this week is that I’m still obsessed with Asmodee Digital’s single-player card game, Onirim. Even though there is quite a bit of luck involved, I can’t stop playing and trying to improve my win/loss ratio. If you’re not playing yet, go and read my review and watch my video to see what it’s about. But if you like quick one-handed games that don’t involve any grinding, this is for you. Each game is self-contained, with just your stats affected by any wins or losses. I can’t even explain why I like it so much, but I do. It’s been my go-to game anytime I have a few minutes here or there to spare, or even while watching TV. It demands your attention, but since it’s turn-based, you don’t have to keep your eye on it constantly. If you want an idea of how much I’ve been playing, look at those stats below. Over two hundred games and I’m not sick of it yet! 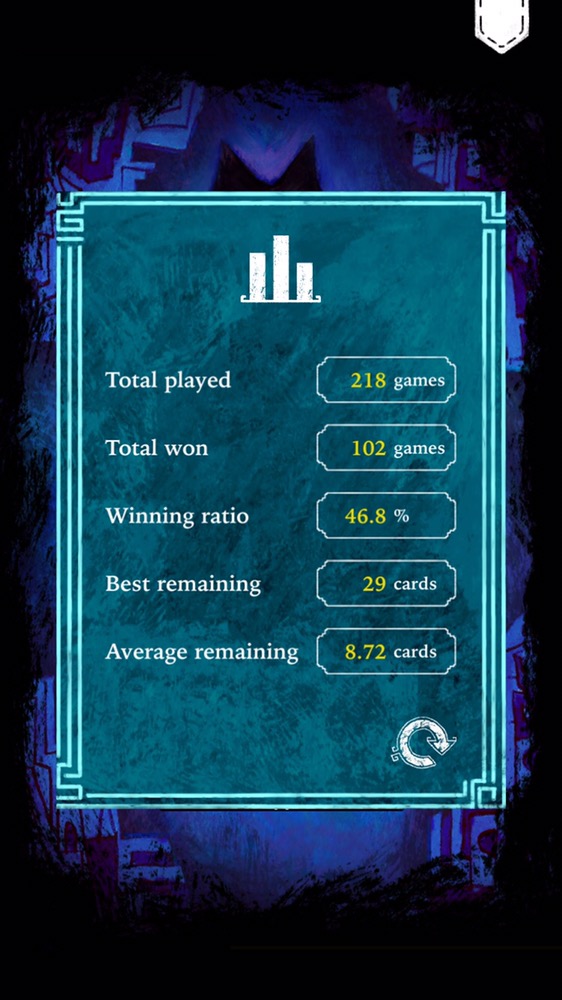 I finally had a chance to go back and finish Visiontrick Media’s gorgeous puzzler, Pavilion. I didn’t take any new video, but you can see one of my earlier videos below. I’m still working on a review that I’ll hopefully have ready for you next week. But verse,it was a very positive experience with a few hiccups. Sadly, it’s only the first chapter and we still have to wait for the rest of the game, but there’s still a generous amount of content available now. By far, the biggest selling point is its artwork, but the puzzles are interesting on their own, and I can’t wait to play the rest of it. If you like puzzles with eye candy, definitely give it a go.

John Kane, aka Gritfish, finally brought his game Mallow Drops over to iOS, its original intended platform. It’s a game that has you rotating your device to control gravity so blocks and other objects — even enemies — fall into place. You then swipe to move your little kiwi bird in a straight line, where it continues to fly until it bumps into something. The goal of each level is to collect three eggs (perfect for Easter!) and then make it to the exit. It’s a clever game, and I have been enjoying it, but I’m only on the second chapter out of five. The levels have been getting far more elaborate and therefore take a lot more of my attention, so it’s been slowing me down a bit. I also encountered some bugs in the levels with keys, so I’m waiting for that to be fixed. But there’s some really clever stuff going on here, and it’s especially enjoyable if you use an iPhone and rotate it as intended. But if you don’t like to do that or want to play on an iPad and not rotate such a big device, there’s a button control scheme as well, and it works just fine. I started a walkthrough here if you need help, which I’ll update as I make more progress.

Square Enix Montreal surprised us all with a ninja release of the latest Lara Croft GO expansion, The Mirror of Spirits. It was designed by KO_OP Mode, the developers behind the upcoming GNOG. It was available on other platforms first and I was getting antsy to play. It was well worth the wait, as it involves puzzles in which a you control both Lara and a mirrored version of her who moves at the same time. They can only move when both have room to do so. There are also new mechanics like pillars with eyes on them that active traps and platforms when either Lara or a creature gets in front of them. I really enjoyed these puzzles, as most of them were clever but not long and tedious. So I didn’t mind the lack of an undo button too much. I only wish the new content had been longer, as now I’m done with it and hoping for more in the future. I highly recommend downloading the game again and playing through this new expansion. And if you get stuck, you can try my walkthrough guide.

Vignettes is a little toy/puzzle combo by Pol Clarissou and Armel Gibson that releases in just a few days, on April 20th. I was lucky enough to get a copy ahead of release and couldn’t put it down until I finished it. It may seem at first like it’s just a toy, since you’re mostly rotating objects on a screen and sometimes poking and prodding at them. But there are secrets hidden inside and some of them are so clever and so satisfying to discover. I don’t want to say too much now because I’m working on a proper review. But this is one to keep an eye out for. I also made a very short video below that doesn’t spoil any of the big stuff.

Nico Prins’ Topsoil is another one that’s not out yet, releasing on April 26th. If you like one-handed puzzle and strategy high score chasers, this one’s for you. It has a very fair pay model of free to download and try then just a one-time payment for unlimited access. I’m still working to improve my strategy, as my current high score is only a little over 1000. I don’t know if it will hold my attention the way Onirim has, but it’s a nice addition to my collection of one-handed relaxed games. I’ll make sure to let you know when it’s out and ready to download! . Until then, you can watch my video below.

And finally, I decided to give Wadjet Eye Games’ Gemini Rue a try since I’d heard a lot of great things about it. I only played about a half hour so far, but like what I’ve seen. There’s an intriguing sci-fi story with some creepy memory wiping stuff going on. It also has combat and a fail state, though that appears to be temporary as you get do-overs. So far I’ve also played as two different characters, which helps shake things up a bit. I’m eager to see where this goes, so I’ll be continuing it over the next few days. If you haven’t played it yet, check out my video below to see what it’s like. If you can’t decide yet, I’ll make sure to update you next week with more impressions.

And that’s it for this week! Not the busiest, but still plenty of stuff going on. I can’t wait for you all to be able to play Vignettes, as it’s really something special. I should have that review and hopefully my Pavilion review ready for you soon. Until then, I hope some of these games hold your attention. Enjoy the rest of your weekend and I’ll see you back ether next Saturday!