This is going to be a bit different than what I usually write about and also a bit of a rant. But I’m hoping it will help prevent some people from making a big mistake.

Every time I have a problem with my iPhone or iPad and go to an Apple Store for help, I end up regretting it. So each time I push it off longer and longer. I really dread going there and only do so when I feel like I’ve exhausted all options on my own.

My most recent visit was due to my iPhone having a whole slew of issues, to the point that I was constantly worried that one day it would end up permanently bricked. It’s less than two years old, and I’m not ready to buy a new one yet. But at the same time, I had such bad experiences with Apple employees that it seemed easier to just live with random restarting, freezing, apps not updating/downloading, browser tabs disappearing. What finally made me go in was the fact that after multiple attempts, I couldn’t make a backup to iTunes on my PC. I was worried that if I didn’t do something soon, I could end up with a bricked phone and no recent backup.

I did finally manage to back up onto iCloud after multiple attempts. I was determined to get one working, as I knew already what their go-to solutions are for all problems and I didn’t want to waste my time going without some backup.

Apple calls their store employees who are supposed to give you in-person support “Geniuses.” But unless you have a hardware problem that their diagnostic tools can identify easily, they will most likely be unable to help you.

By their own admission, if something isn’t a hardware issue, they’re taught to try three things:

1. Reset All Settings. This would also include updating to the latest iOS version if you’re not on it already. This is a little annoying and time consuming because you have to go back and figure out what changed, redo your fingerprints, background photos, ringtones, etc. Its a hassle, but if it fixes your phone, you won’t lose any of your apps or games’ save data. Everything will be kept intact. Of the three solutions they offer, this is the least invasive.

2. Restore to Factory Settings + Restore From Backup. This would also include updating to the latest iOS version if you’re not on it already. Make sure you have a recent backup to your iCloud for this. Assuming nothing goes wrong, your phone will be restored to almost exactly the same state as it was at the time of the backup. Some apps that are no longer available might disappear, as well as those that haven’t been released yet. Any TestFlight apps will also be gone. So, it’s not ideal but you’ll still have almost all your games and save data. And hopefully the problems you were having will be gone.

3. Restore to Factory Settings. If restoring from backup doesn’t get rid of the problems, Apple Geniuses will claim that the problem is with your software and even if you were to move it all to a brand new phone, you would still have the problems. They recommend a complete wipe to factory settings without restoring all your data from a backup. They might be able to salvage a few things like contacts, but for the most part everything is gone. You’re starting over. If you have a lot of games on your phone and they don’t all have iCloud sync for save data, then you will lose your progress in those games. They don’t seem to comprehend why this is a bad thing. But it is if you’re a big iOS gamer. If they try to get you to do this, I suggest refusing and going home to research your problems yourself. Look up each individual issue on the Apple forums to see if other people had the same problem and were able to solve it.

In my most recent visit, most things seemed to be running smoother after the restore from backup. My phone wasn’t locking up constantly, though it did reboot once on its own. I was almost ready to walk out and consider it fixed. If not 100%, at least enough to satisfy me.

But then I tested the Safari browser and saw that my tabs were still disappearing. I showed them and they told me — predictably — that the only other solution they have is a factory reset. Otherwise I have to live with the persistent issues. This was absolutely out of the question for me, as I have hundreds of games on my phone and most do not have iCloud saves. So I went home, figuring I could at least live with the problem for now as long as my phone works otherwise. Perhaps down the line an iOS update would fix it (this is also something they have no information about).

I found the solution on Apple’s forums, thanks to one of my Twitter followers. It was a really simple solution — delete browser history. 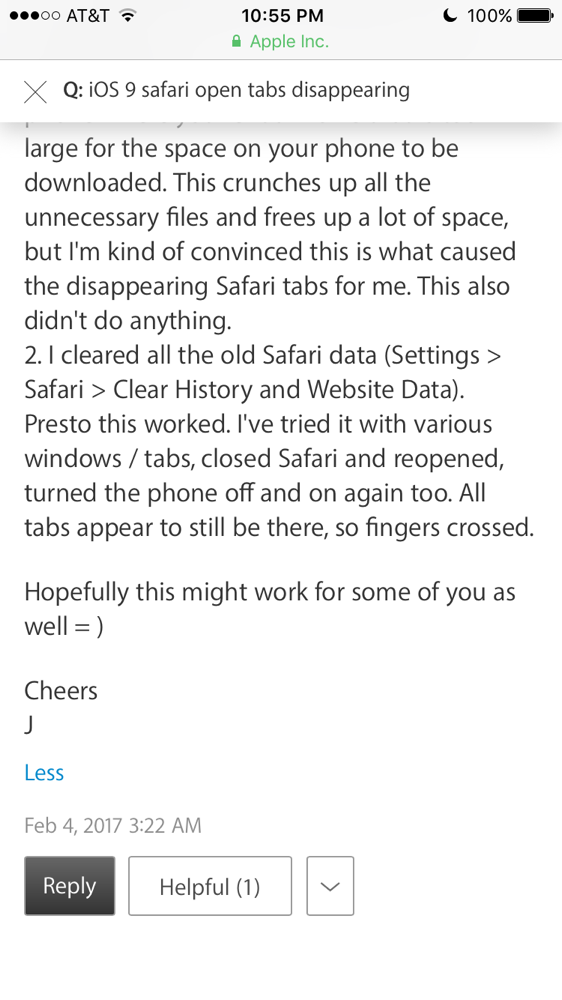 That wasn’t something I thought to try because my problem was that my browser history was already cleared and kept clearing! Why would I, without any real knowledge about the technical workings of iPhones, think to try something that sounds counterintuitive? But it should have been something someone working for Apple support and calling themselves a “Genius” should be able to suggest before a factory reset! Had I listened to them, I would have lost everything over something that was a minor problem with a very simple solution.

Every time I walk into an Apple Store, though, I hear them offering that same solution to just about everyone around me — a factory reset. Because they don’t know how to troubleshoot each individual problem, they just give everyone the same cure-all, which isn’t a cure at all.

So I hope what you take away from this is to do your own research and troubleshoot your problems before you listen to them. They’re not taught to know anything about these devices other than cookie-cutter solutions for every issue. It’s like going to the doctor with a broken finger and he puts you in a body cast.