Once in a while, a truly rare and unique game comes along that’s not just a perfect fit for touchscreens, but makes you wonder why it hasn’t been done before because it just seems simultaneously ingenious and obvious. Loveshack’s 2014 puzzler, FRAMED, is one of those games. It had you swapping panels of a comic strip in order to change the outcome. It’s definitely one of the most unique games I’ve ever played, and the mechanic works really well, making for some interesting puzzles. But the game was over way too soon, and I’ve been eagerly waiting for more.

FRAMED 2 is finally here, but it’s a prequel, despite the “2” at the end of it. The main character this time is a very chill spy in white shades. Once again, all the characters are black silhouettes with some white trimmings to define them. They’re still after the same mysterious briefcase, which again passes hands quite a bit. The woman from the original game is back, as well as the mustachioed man. You’ll often have to figure out how to get two characters to the exit instead of just one, adding some extra complexity. There are plenty of cops to bop on the head, and some animals join the mix this time, including a particularly elegant street cat. And everything looks great, with more details than before and more exotic environments. The character animations can be awkward occasionally, but for the most part they’re spot on, like a comic book come to life. 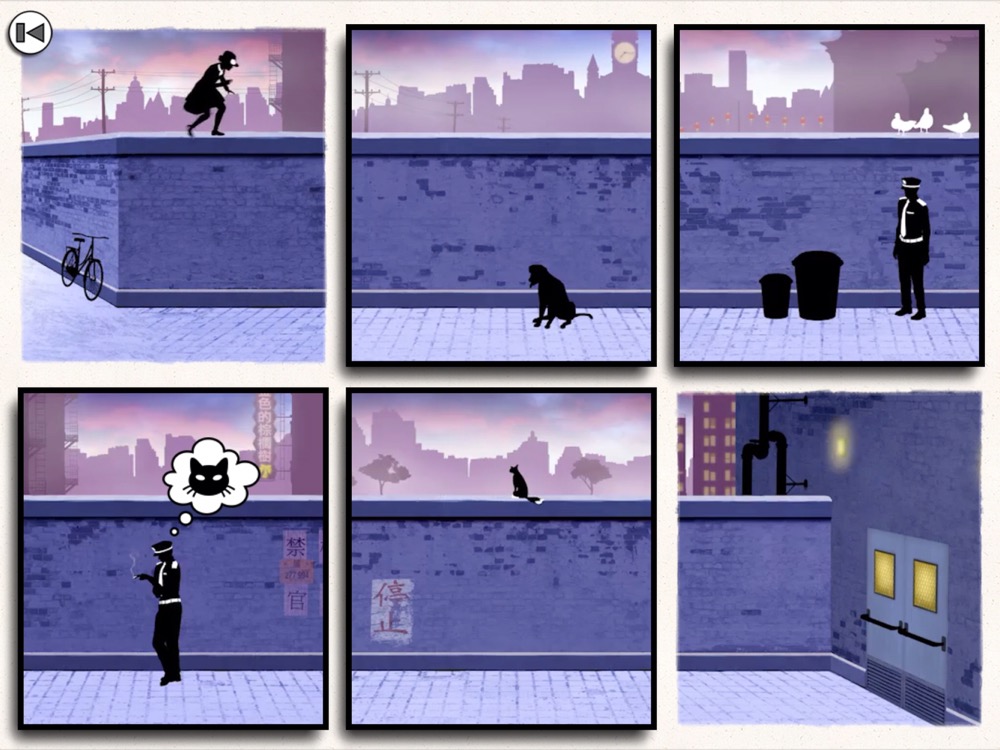 The original game felt a bit too easy at times, and I thought it truly shined when it offered a proper challenge. Like Monument Valley, which released in the same year, I thoroughly enjoyed it but wanted more. More challenge and variety, specifically. Well, I’m happy to report that I did not breeze through FRAMED 2 the way I did the first one. Already a few levels in, it had me reusing panels, a mechanic we only saw a few times near the end of the original game. And what’s more, each level felt different and never boring. A few early puzzles are on the easy side, but there are some dastardly, devilishly tricky ones you’ll encounter throughout. While the original game relied heavily on rotating panels, this one’s focus is on reusing them. And you’re often recycling the same panels several times, not just once. If you enjoyed the train level in the first game, you’ll be happy to know that that puzzle is easy compared to some of the stuff you’ll encounter this time around.

What I loved so much about the game is how things change when a frame is used, so you need to then think about how that could help you escape from the cops. It’s all very dynamic, and you must stay on your toes so you don’t miss what’s happening. Luckily, grabbing and holding onto a panel pauses everything until you release it. So if you’re worried that your reflexes aren’t fast enough, it shouldn’t be too much of a concern. I did find myself wishing at times for a proper pause button on the trickiest levels, so I could sit back and think about it mid-run. But perhaps that would have made things too easy, or remove the sense of urgency that those levels tend to evoke.

As with the first game, failure is itself entertaining. I would often mess around with a level just to see all the different ways it could go wrong. That also keeps frustration at bay, as you’re entertained even while figuring things out. I highly recommend taking your time to play around with different orders instead of just solving each puzzle and moving on. A lot of care has been taken to ensure that each scenario can play out in interesting ways, even if they’re not the right one. 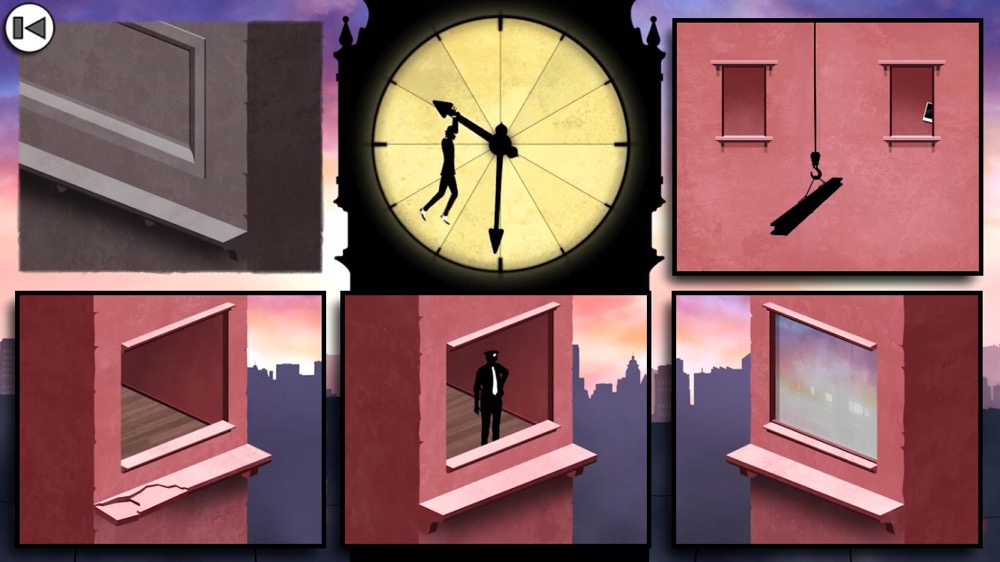 My favorite level is also the one that took me the longest to solve. It was so sneaky and when I finally figured it out, I wanted to both punch the developer and shake his hand. It’s silly, even almost unfair, and yet it’s so hard not to smile when you get it. It’s these moments where you can tell they really put their hearts and souls into this game to make it truly memorable. I know I won’t forget the satisfaction of solving it after being stuck on it for nearly an entire day. Everything about it is just so clever, that level alone would have been worth the two-and-a-half-year wait. 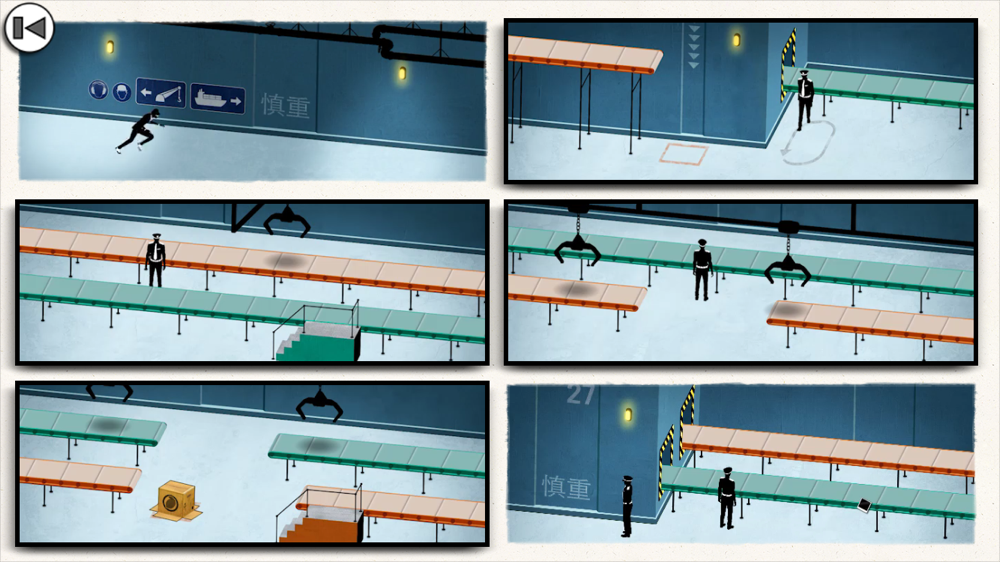 One of my complaints with the first game was that there was no menu or way to go back and replay specific levels. They since updated the game to add a level select screen, and that carried over to the new game. It’s also more important this time around, because there are bonus collectibles in the form of cartoony polaroids spread throughout the game. Figuring out how to get each of them adds another layer to the game, as it often involves a more complex solution than simply getting through the level. Sometimes you even have to fail the level to get it, making it easy to miss them the first time around. So the ability to revisit solved puzzles is not just a nice feature here, but a necessity. I enjoyed looking for each polaroid, though I should mention that one of them is nearly impossible to get without stumbling across it by accident or being told how to get it. The developers have said they plan to add a clue for that, though, so it should be a lot more fun and satisfying to hunt down in the future. Until that happens, it could be a source of anxiety for completionists. All the others were fair, though, and gave the game some welcome replay value. 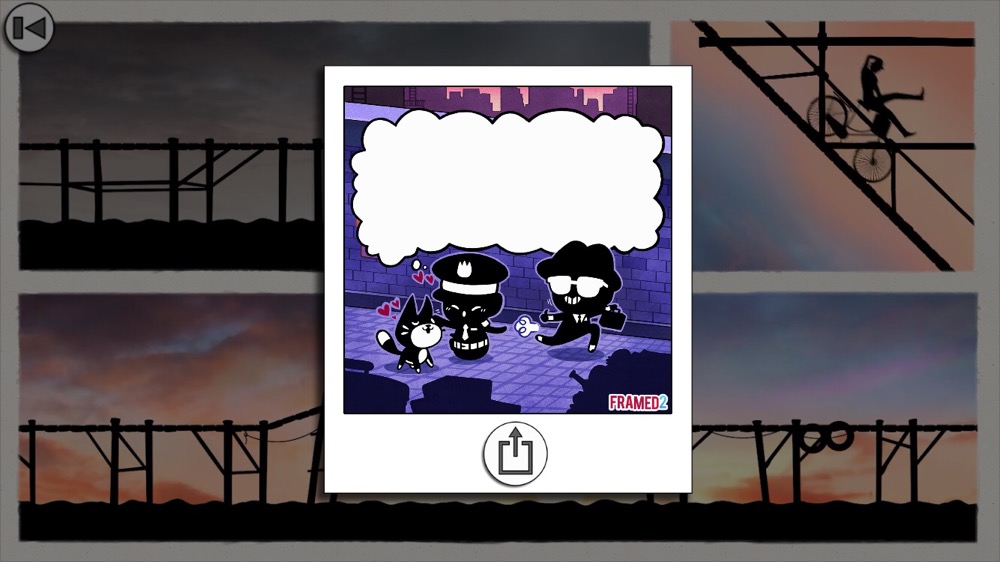 Now, I can’t talk about the FRAMED series without mentioning Adrian Moore’s work on the fantastic soundtrack. I’m usually annoyed when a game doesn’t allow me to shut the music, but I wasn’t bothered by that in the first game and I’m most certainly not bothered by it here. In fact, I hit a small glitch when I was on the pre-release version — that I haven’t encountered since — where my favorite tune would stop playing if I spent too much time on that level, and I missed it so much that I would reboot the game just to get it back. The music is right out of a spy movie, offering tension and excitement at just the right moments. Some of my favorite tracks have even gotten stuck in my head and I could maybe see listening to it on its own, even without the game. The music is a huge part of the experience that you’re robbing yourself of if you try to play with the sound off. So don’t do it! 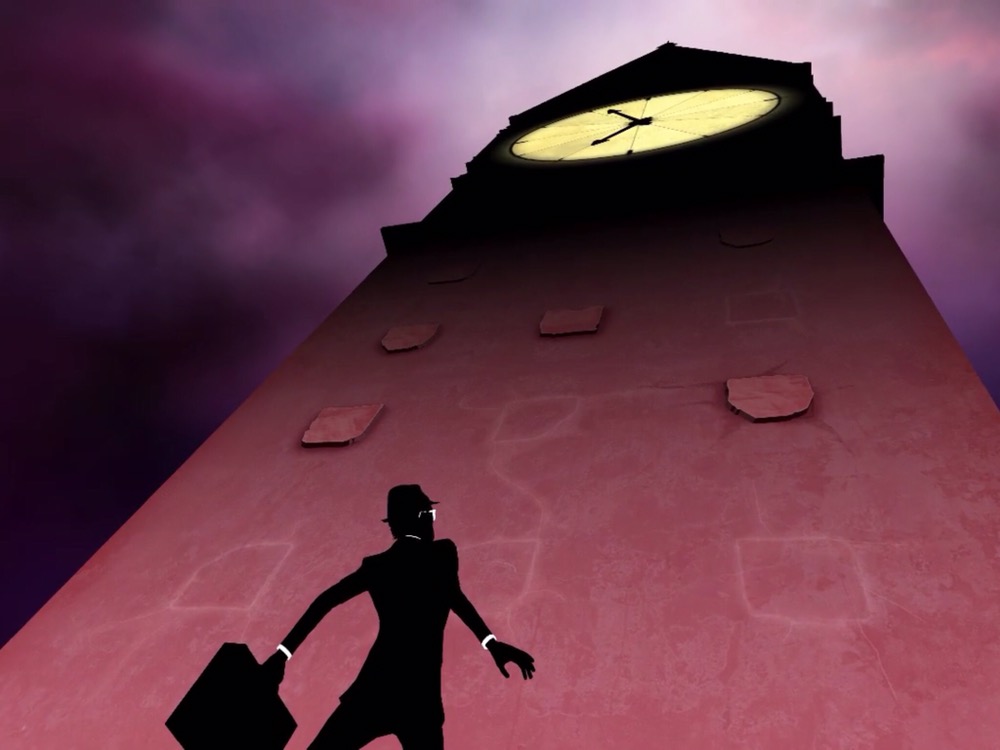 I want to touch upon the story a bit without spoiling too much. Where the first game confused me, this one is much more straightforward and a lot easier to follow. I appreciated that, and am glad they were able to keep it dialogue-free but still understandable. That said, some small details were not immediately apparent to me, but make a lot more sense in hindsight. We get to see the woman from the first game as a young girl, before she picked up her kick-ass spy skills and started running on top of moving trains. It’s a bit hard to tell her age at first, because she’s smaller but wears the same hat. So I admit I mixed up some details. But on reflection, it actually is a great story that leads up to where the original began. I did miss the strong, capable, badass woman we know from before, but it’s interesting to see her origin story. The two characters also share a bond that adds some emotion to the game that was somewhat lacking in the first. I do hope, though, that the third game — if there is one — will have her kicking more ass than ever before. 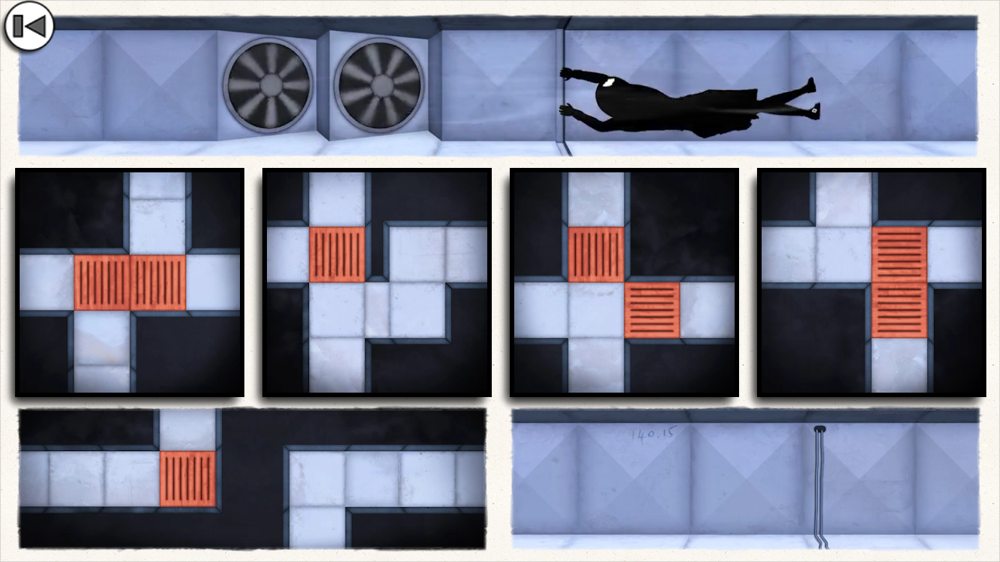 The bottom line is that FRAMED 2 is an all-around fantastic puzzler that reflects the 2.5 years invested in it. It’s a proper sequel, with the old mechanics turned up to ten. The developers don’t waste half the game re-educating the players, but instead assume we’ve done this before and are ready for a bigger challenge. While I still wish there more of it, I’m glad that they chose to go with quality over quantity and not try to stuff it with a bunch of filler. Just about every level had something unique to it that kept the momentum going, never getting boring. If you want a game that will surprise you till the very end with its content and mechanics, you’ve come to the right place. Puzzle fans should not miss out on it. So what are you waiting for? Go download FRAMED 2 right now!

And if you need help with any of the puzzles, try my complete step-by-step walkthrough guide.