The House of da Vinci
By: Blue Brain Games

If you’re a fan of The Room series by Fireproof Games and can’t wait for the fourth one to release, Blue Brain Games’ The House of da Vinci is the closest thing you can get to the real thing. In fact, had someone kept me locked away and prevented me from seeing or reading any games news, then put the game in front of me and told me it was made by Fireproof, I would have easily accepted that as fact. Yes, the game borrows heavily from its inspiration, but this is no cheap knockoff.

So let’s start with the similarities. The most obvious is that you interact with the environment in the same way. The core concept involves puzzle boxes with switches, buttons and sliders that make objects pop up, rotate, open, or any number of other reactions. You find an object or clue, then look for a place to use it. It’s standard room escape fare, but in the distinctive style and atmosphere of The Room. As with its inspiration, you tap to pick up items, drag items to use them, double-tap to zoom in, and pinch to zoom out. When you find an object, it tells you so in the same way, and the objects are named in a similar fashion, such as “three-piece object with threaded groove.” You can rotate each object in your inventory and often manipulate it to either transform it into something else or combine it with another item. For instance, a wooden rod can be unfolded into a crank. And a spring might be combined with another object to create a lighter. The story is also told through letters from two different people. Sound familiar?

The game even goes so far as borrowing the eyepiece from The Room. Sure, this time it’s called an Oculus (or Oculi) and is fitted into a rather nifty-looking gauntlet that appears during cutscenes. But the trick of looking inside locks and machinery to manipulate them is borrowed from The Room Three. The only difference is that there’s a ghostlike blueish hue that everything takes on when you look through it, like an x-ray, instead of having you actually go inside the locks. But since both games use that same color when you look through the lens, I had to check to see if The Room Three did it the exact same way, since it felt so much like deja vu. So there are small differences, but the mechanic is almost exactly the same. I do like the time-rewinding mechanic that was added, though. To activate this technology, you trace over a geometric shape with your finger and then you have access to a slider. The slider allows you to see something that happened there in the past, in motion. You control the speed by pushing the slider back and forth. Sometimes it’s used just to get a clue for a puzzle elsewhere. Other times, you can match up the pieces exactly on top of it without having to memorize a pattern. It was a nice addition to the other mechanics that were borrowed, but I do wonder if the game could have stood out a bit more on its own by trying for something besides an eyepiece, or a completely different mechanic, or even just a different color. Maybe a timepiece with an ultraviolet light? That’s just off the top of my head. As is, it makes it seem like the developers weren’t even trying to make their game stand apart from The Room series. 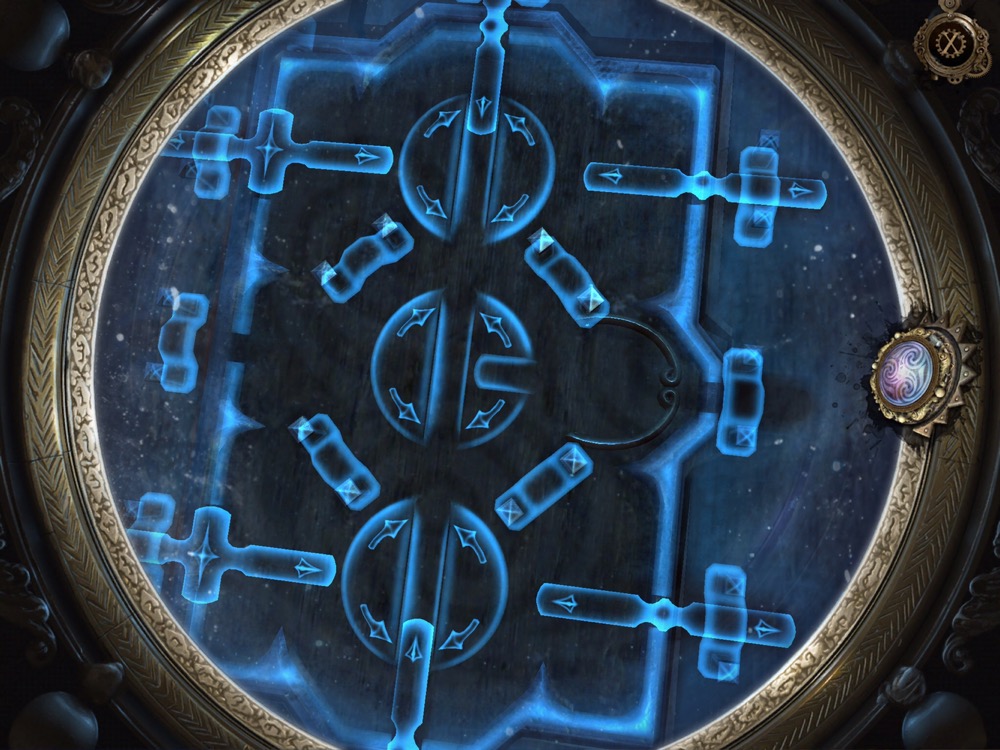 Even the setting looks the same, though the subject matter is not. The main difference is that, as the name suggests, you’re exploring Leonardo da Vinci’s house. The machines you encounter are inspired by his real-life inventions and they work in believable ways. There’s a small catapult that you use to light up new puzzles by flinging tiny fireballs across the room. There’s a crypt covered in puzzles and guarded by a mechanical knight. There’s even a tank with a cannon inside. I’ll leave the more impressive stuff for you to discover on your own, as they really are a sight to behold. Everything is tactile, looks gorgeous, and is satisfying to watch as it performs each action. But there’s still that feeling that it would fit right at home in the world of The Room if you just remove da Vinci’s name from it. After all, isn’t The Room‘s Craftsman a fictional inventor? 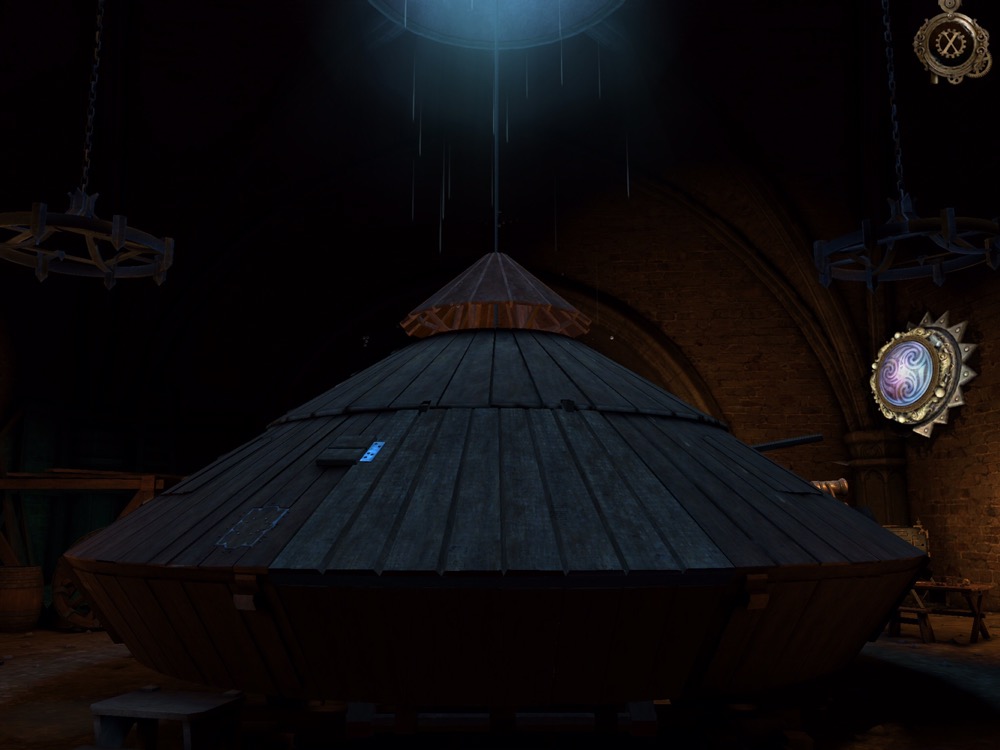 All that said, this is still a really good game. A ton of care went into the details and making it all seem very lifelike. If I were to compare it to the different Room games in regards to scope and length, I see it as a cross somewhere between The Room Two and Three. This is because it feels bigger than the previous, but the playable area doesn’t expand with each chapter (as in the latter) and there are no hidden puzzles that give you alternate endings. Each chapter feels big, like in The Room Three, but once you complete it you leave it behind, as in Two. It also doesn’t have the somewhat repetitive symmetry of The Room Three, so that’s definitely something in its favor. Every chapter feels unique with a new setting and the puzzles never feel like they’re repeating themselves. 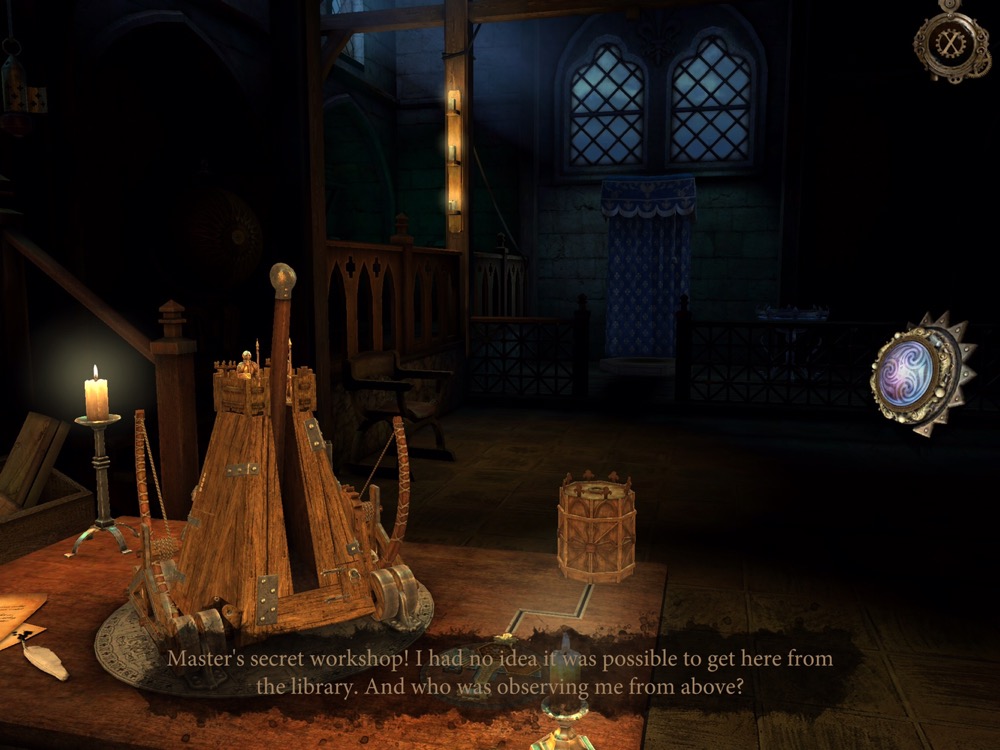 I did find myself using hints more often than in The Room Three, but I didn’t really feel guilty about it, because when I did it was mostly because I couldn’t find something. The game can often feel like a hidden object game with the way things are hidden. That’s because it’s not always clear that you can even interact with something in a specific way. You might zoom in on a chest several times without seeing that there’s something on its corner. I know there’s a helping of that in the Room series as well, but here it felt far more frequent. So don’t feel too bad about using hints. I think it can cut down on the pixel-hunting frustration. And since the game doesn’t offer any help with actual puzzles, you have to figure out the real meat of the game on your own (or try my walkthrough guide). 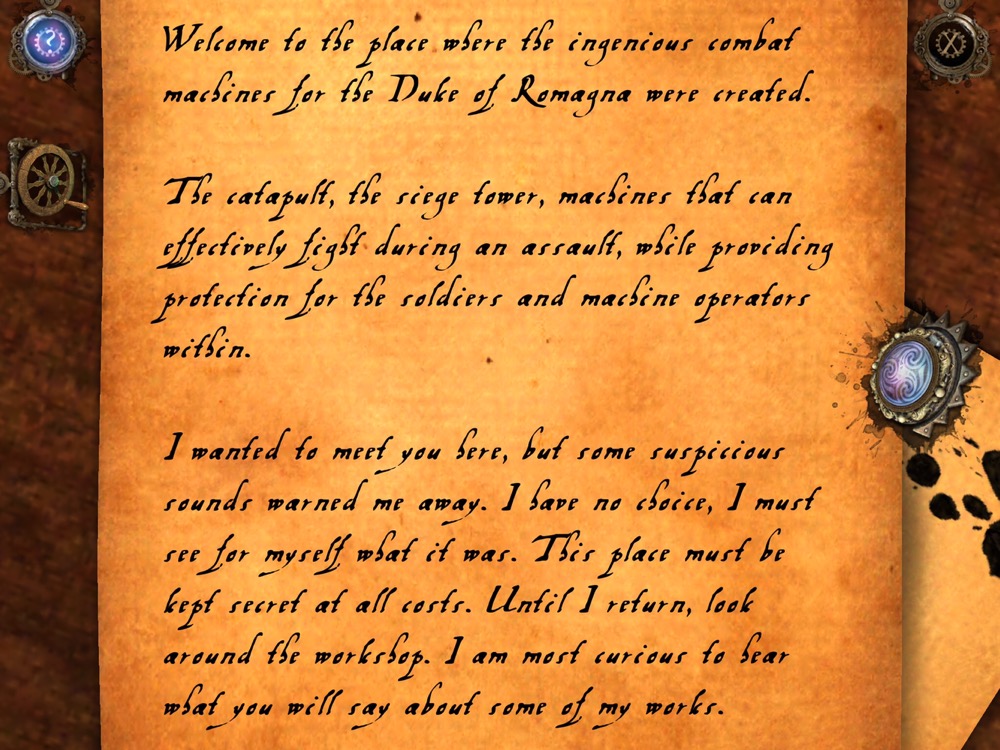 One of the trickier and more satisfying puzzles involves guiding an emerald through a maze, where parts of it rotate, forcing you to plan ahead or risk getting stuck and having to start over. It was unique and took me a few tries to solve it. The mini catapult felt the most like a puzzle from the Room — like the miniature ship — but was also one of the most satisfying. There were lots of little objects to find and attach to it, all with a purpose. Another involved inspecting different liquids through a microscope and using those findings to solve another puzzle. There’s plenty of variety both in setting and puzzles, so the game never wore out its welcome. That said, not every puzzle is a winner. One of the weaker and more tedious puzzles involves trial and error, but you have to pump up the machine before each attempt. Trial and error puzzles are already tedious and uninteresting, but adding that extra waste of time between each attempt made it feel like I was being punished for something. Also, one puzzle was a bit bugged in favor of the player, but that’s not a big deal. Overall, there’s a nice variety of puzzles. 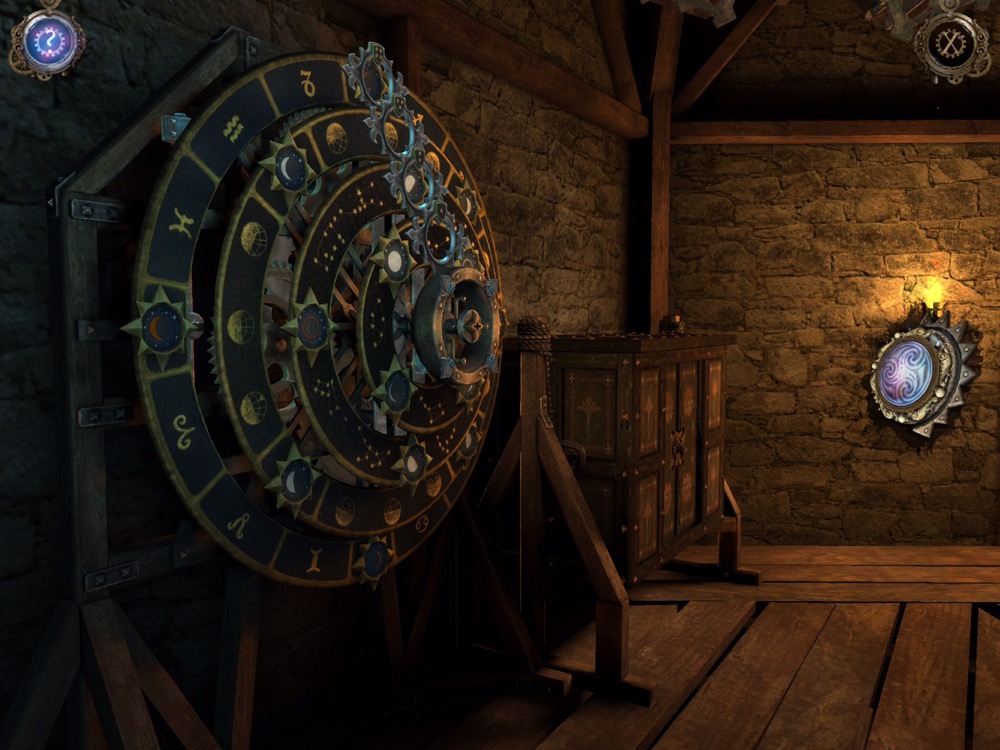 Unlike The Room series, there’s no iCloud sync, so you’ll have to choose a device to play on. If you have an iPad, there’s no question about it that you should choose that over an iPhone. For a game like this, the big screen is always worth the sacrifice of portability. iCloud would have been appreciated, though, especially since the game allows you to revisit any chapter once you complete the game. It would be nice to be able to delete it to make room but then install it on a whim to play a specific chapter. Hopefully iCloud will be added at some point. 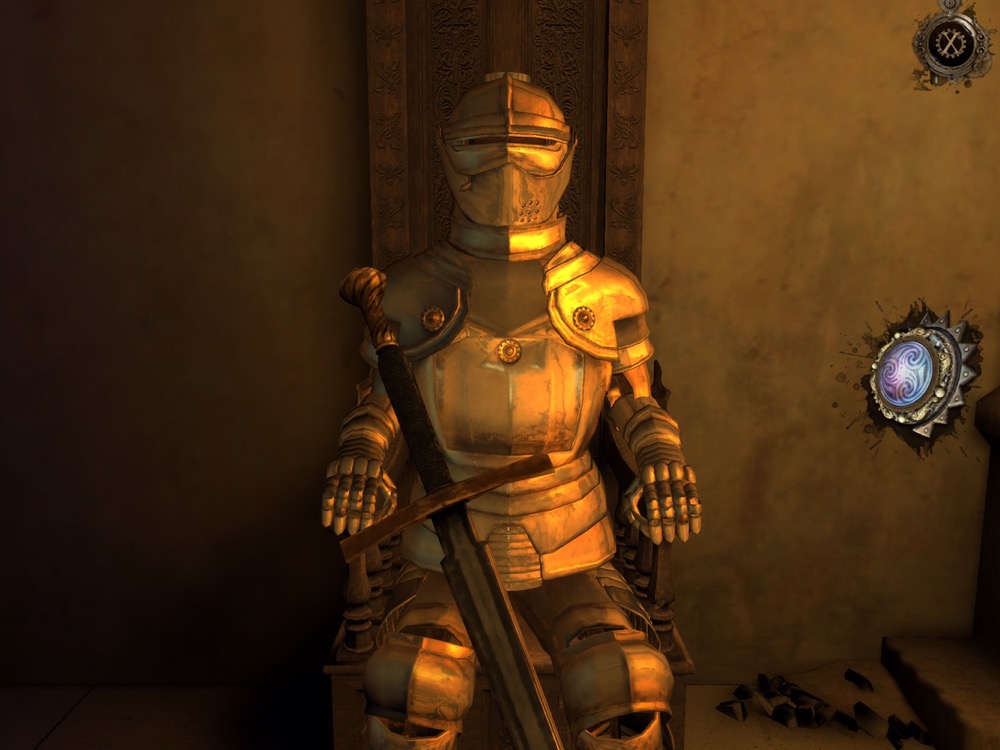 The bottom line is that fans of the Room series are going to enjoy The House of da Vinci. Unless you have a moral issue with playing a game that heavily borrows from another game, you’re going to want to experience it. It’s as close as you’ll get to more of The Room until the next game comes. There’s not much else to say about it. If you want more of The Room, you’ve got more of The Room. It might have been nice to see something more unique, but it’s hard to complain about a game being about as good as its inspiration. It’s not easy to improve on a formula that works as well as Fireproof’s beloved series. I also didn’t mind so much that it didn’t have a proper conclusion, because I was in it mostly for the puzzles and atmosphere. I would have liked more of a payoff in the end, but the game was enjoyable enough that the lack of it didn’t ruin the whole experience for me. And I do hope we get that sequel, as the non-ending left it open for some really interesting possibilities, hopefully allowing the game to step out on its own more and distinguish itself from its inspiration. If you’re looking for a solid game like The Room, look no further and download The House of da Vinci here.

And if you’re stuck, make sure to try my complete walkthrough guide.