I’d been looking forward to mif2000’s The Franz Kafka Videogame (TFKVG) for a while now, ever since it was announced it would be coming to mobile. Granted, I didn’t know much about it outside of screenshots I’d seen. But I loved the look of it, and I like weird and quirky games, especially adventure games. While I don’t know that much about Franz Kafka’s works — I only read Metamorphosis in high school and barely remember it — the game promised surrealism, and that was more than enough for me. I’d heard the game is short, but I actually don’t mind that so much. I rather play several small and interesting games than one long one for months. The problem is, a puzzle adventure game is only as strong as its puzzles. And that’s where TFKVG falls short for me.

As I said, the artwork looks great. It truly captures the atmosphere the developer was aiming for, has personality, and allows the bizarre characters and storyline to feel at home. You have a talking duck, the roach man from Kafka’s Metamorphosis, and some tentacled one-eyed monster. The story is absurd as well, with an ending that isn’t all that memorable but does serve its purpose. The game is indeed short and can feel rushed at times, but that really didn’t bother me much. The story was enough to push me along, wondering what was going on. Even if it wasn’t the most satisfying ending, I could have easily recommended the game as long as the puzzles were strong. But I found them lacking and that’s what I’ll be discussing for the rest of this review. 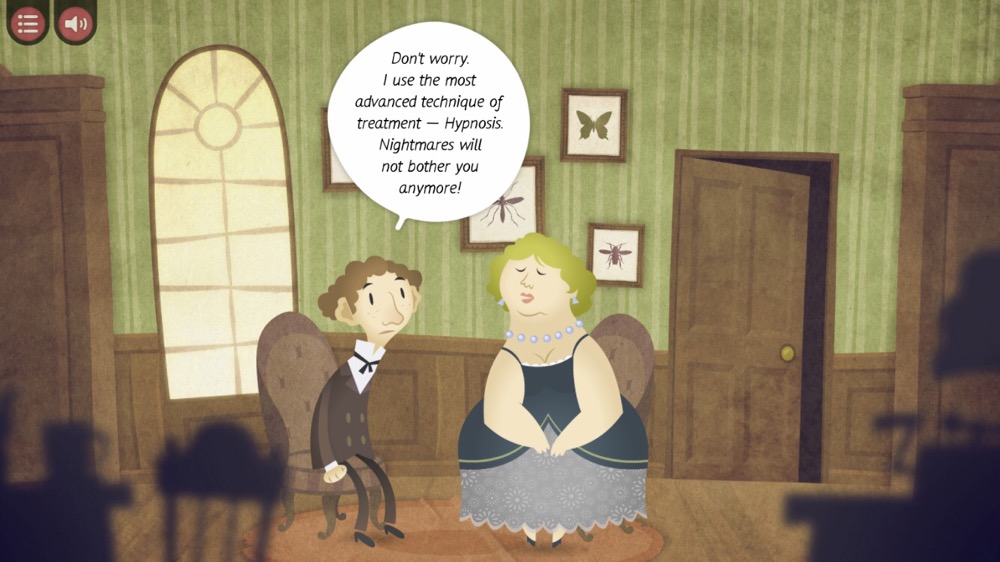 I liked the very first puzzle quite a bit. It took me some time to solve it because I was expecting a typical point-and-click adventure. But once I realized what I needed to do, the solution was really satisfying. It rewards you for messing around until something clicks. Even though there are no instructions, I was able to figure it out on my own without too much frustration. The game was off to a good start, and I especially liked that there’s no inventory to worry about. Instead, it has you focusing on a single puzzle before you’re allowed to move on. Even though the game was released on PC first, the layout is a good fit for mobile, because you can play it in small chunks. It even saves each puzzle in the level select screen, allowing you to revisit ones that you liked without having to replay huge parts of the game to do so. Everything about the game seemed like a streamlined experience perfect for a mobile device. But the more I played, the more frustrated I got with the puzzles. 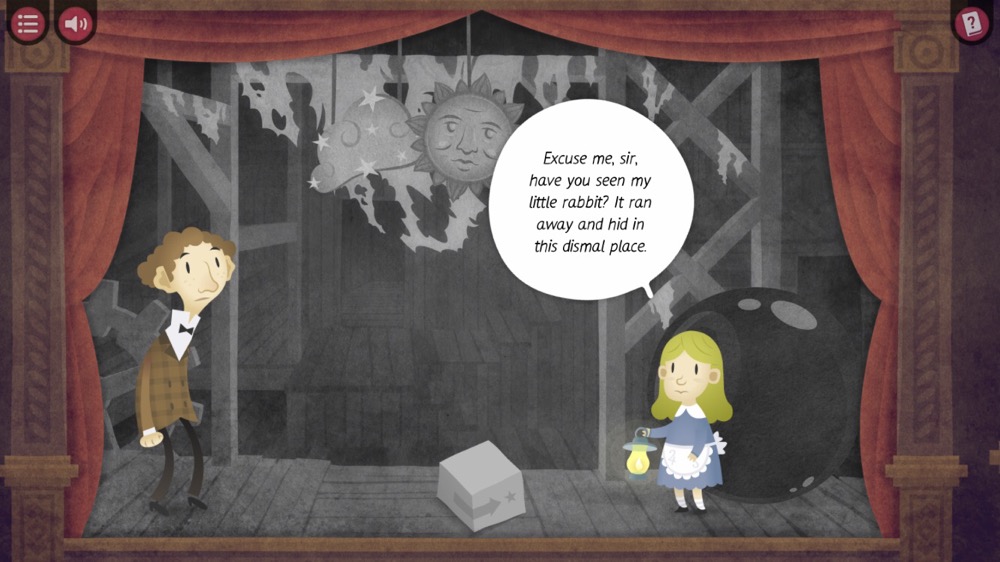 I don’t want to spoil too much, so I’m going to be as vague as possible. Too many of the puzzles try to trick the player by hiding something important or counting on the player missing a vital piece of information. Red herrings abound. For instance, there’s one early puzzle that takes place on a board game. There are some Scrabble tiles strewn about, mostly in single letters, except for four that spell out RUSH. There are some pieces on the board that move a bit if you tap them. If you touch a Scrabble tile, it bounces up a bit before settling down again. This made me think that I needed to spell out a specific word using the tiles. Perhaps PURSUE or SUPER. I couldn’t be further off the mark, though. Tapping the tiles served no purpose whatsoever, other than perhaps to mislead the player. I spent a good amount of time tapping on things that moved. Remember, the first puzzle — just a bit before this — only allowed me to move things that were part of the solution. I did not expect so many red herrings in this one, so that led to extra frustration. I eventually used an in-game hint and didn’t really feel bad about it, as it was entirely dependent on missing some small detail in the environment. It felt cheap, and I was ready to just move on, hoping that the rest of the puzzles would be more satisfying. I found the next part of that same puzzle far more interesting and clever, though had I missed a small change in the environment, I might have though otherwise. This game is very much about being perceptive. If you’re not good at noticing small details, you could end up using hints to get through most of it. 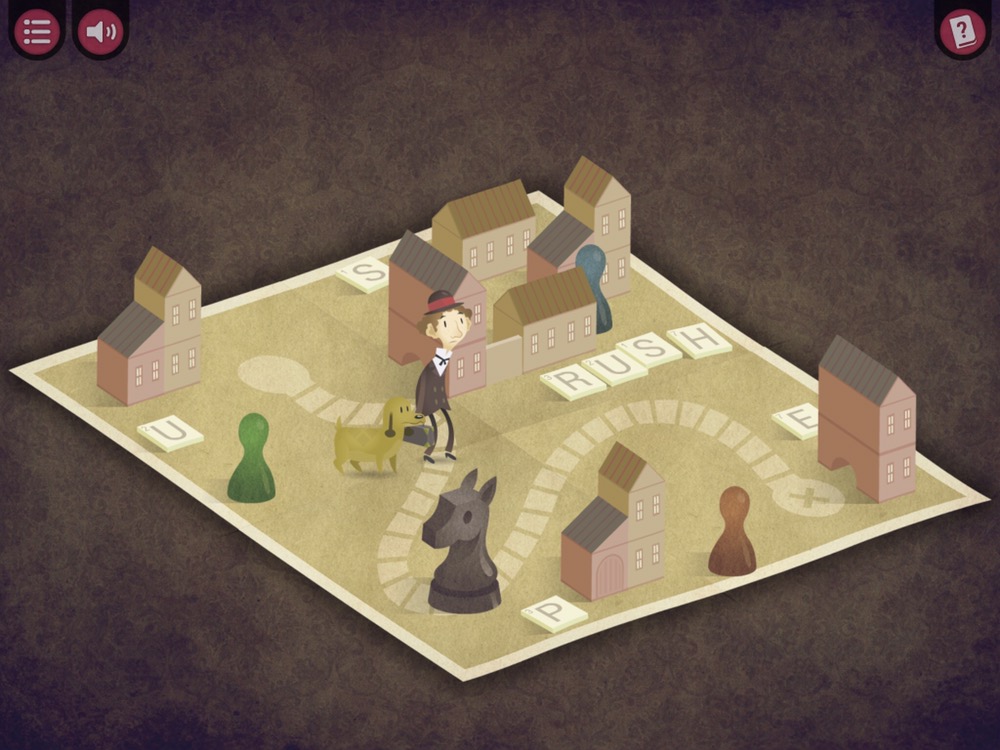 Most of the puzzles are one-trick ponies where you’re only really stumped because you missed or misread the only clue. Or there just wasn’t really any clue. For instance, in a particularly frustrating late-game puzzle, you can tap on certain things to activate them. But I didn’t notice that I could pull on one of them as well. Yes, in hindsight it was a slightly different shade of color to bring your attention to it. But that just wasn’t enough. The puzzle itself is easy once you realize you can tug, not just tap. But I needed a hint to notice that and I imagine most players will. Where’s the fun in that? The solution wasn’t clever so much as misleading. And the reason for this is simple — inconsistency. The game isn’t built up in such a way to make you think that you might need to pull on something if tapping is already doing something. As early as even the first puzzle, tapping on a piece of scenery moves it in a way you would normally associate with dragging. But it’s not necessary to drag it there. So when you get to this later puzzle, there’s no reason to really even think of pulling at it, even if you do notice the slightly off color. Other levels had odd bits of color that meant nothing. In essence, you don’t really learn from past puzzles because the game is always trying to trick you in new ways. You think you understand how things work and then it points and laughs at you for letting it trick you yet again. 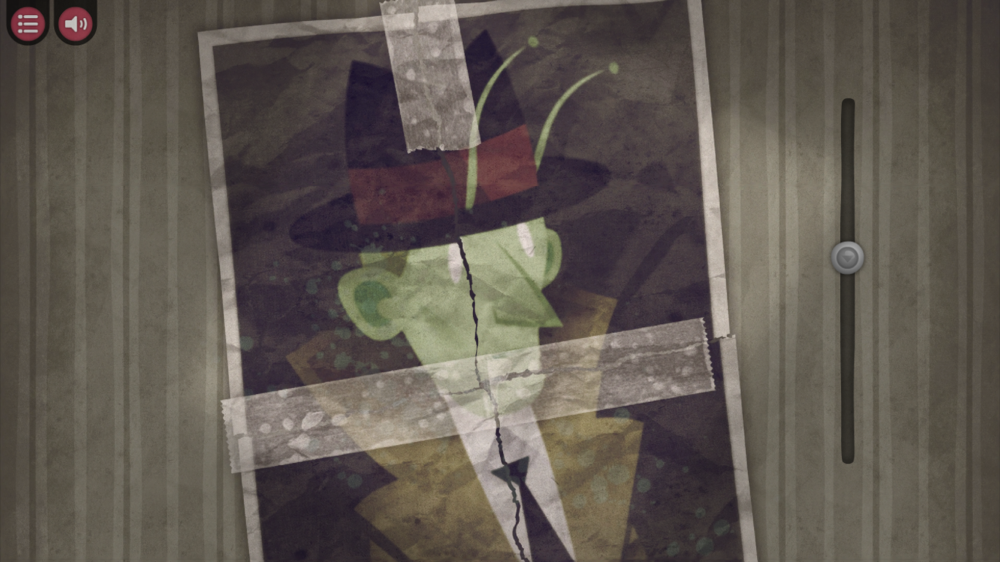 For every puzzle I enjoyed solving, there were three more that made me groan and resort to hints. And I hate using hints. One puzzle I liked involved another board game, though this time you have to figure out the right order of binary moves — forward or back — to reach your destination. It was a proper puzzle that you get an idea of what you need to do just by messing around with it a bit. That’s what makes a good puzzle in my eyes. But another one offered a clue before you accessed the puzzle, so if you missed it, you’re left wondering what in god’s name the game expects from you. The hint will remind you of the clue, but that shouldn’t be necessary! 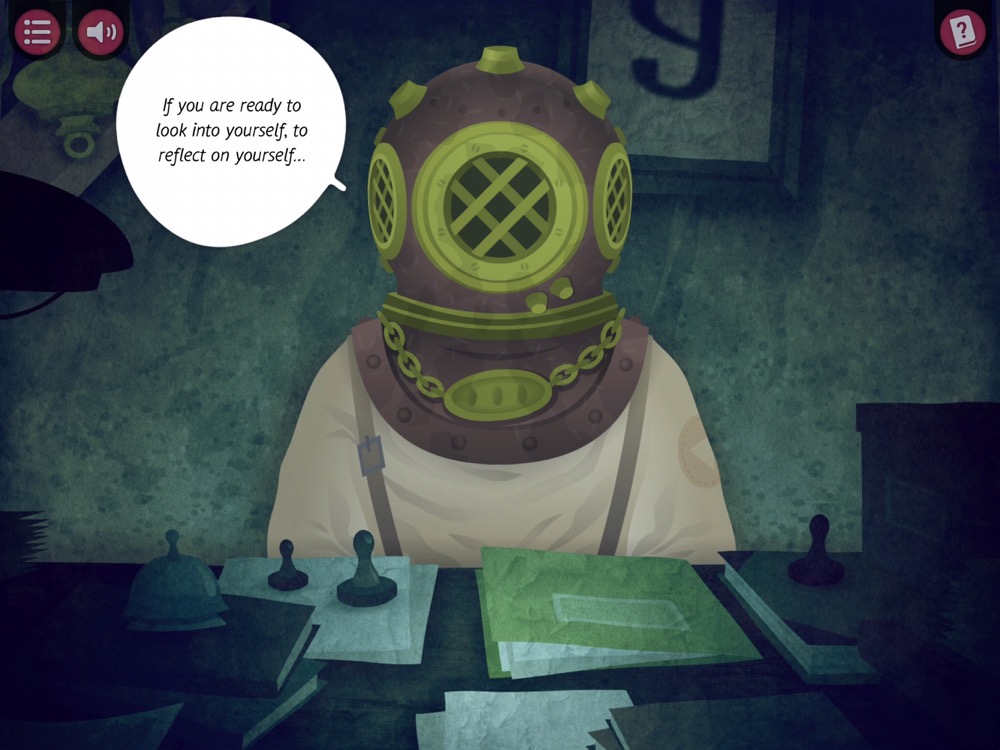 A few of the puzzles were overly simple but still interesting diversions. But then there’s one of those horrid tile-sliding puzzles. Only this time, there’s an invisible pattern that you can’t see unless you trigger it first. Until then, you’ll probably just make assumptions about what the game wants and waste more time on it than you’d like. But even after you figure that out, you can’t see the pattern and move the tiles at the same time. You have no choice but to solve it half blind. Personally, I’d be happy to never see another sliding tile puzzle again. It’s one thing if a game has plenty of other great puzzles and they slip one of these in. I can easily forget it. But this one took up too much of my time and headspace, so it became one of the most memorable — but not in a good way — puzzles. 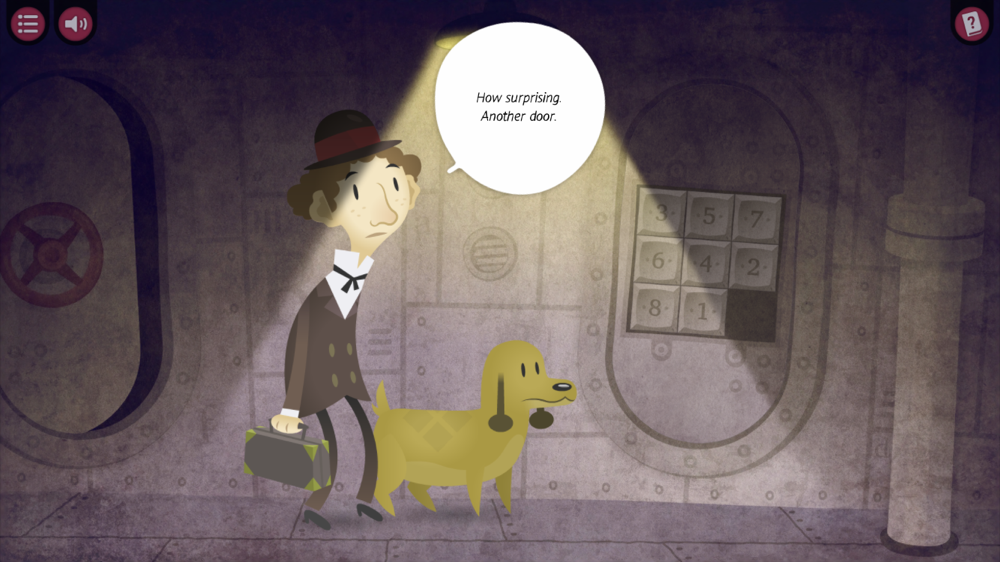 There was one puzzle with a toy monkey that frustrated me at first because of how limited it was. There’s only one action you can do — pull the cord to make it bang its cymbals. I was sure I missed some other interactive aspect of it, so I kept tapping and tugging at things to try to make something happen. I finally gave into the fact that it was just me and the cord. And once I figured out the clue — through another in-game hint — I figured out the solution through some tinkering and found it quite clever. That ended up being one of my favorite puzzles, even if I did need a hint. That’s partly due to the nature of the hint. While some hints basically gave away the whole solution, this one just gave me a tiny bit more focus, enough to start playing with what I had instead of looking for something else to do. This puzzle felt fresh and creative, and almost made me forget my frustrations with so much of the rest of the game. But the game ends on a frustrating puzzle, making it hard to forget the headaches for long. 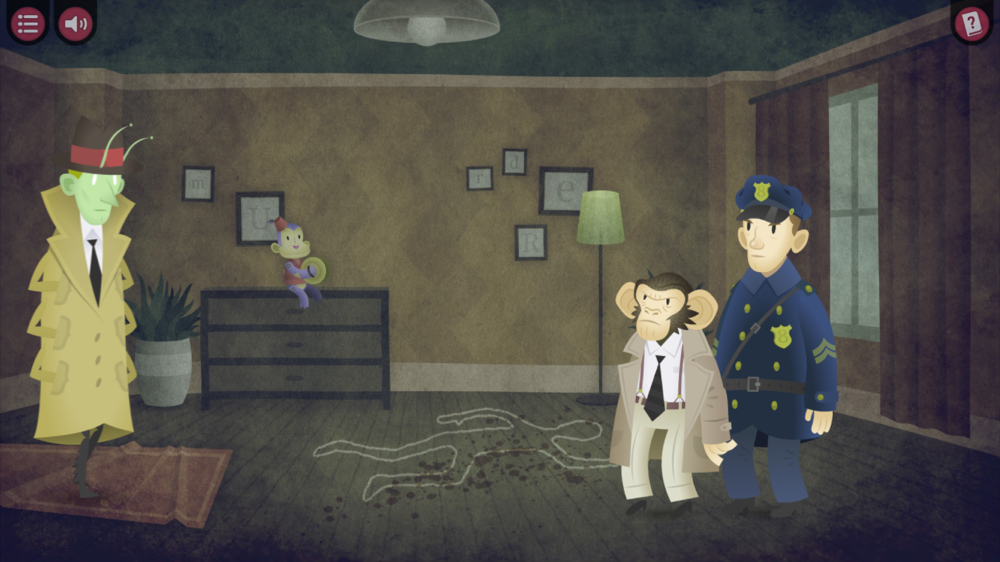 There are some other puzzles that just felt cheap and unfair but I can’t get into it in more detail without spoiling them. But again, the least enjoyable puzzles had one thing in common — misdirection. Whether it’s by making you think the puzzle works one way when in fact t works another way, or requiring pulling instead of tapping, or just interactive objects that mean nothing. The game tries to trick you instead of just providing clever puzzles. That’s just cheap. The best puzzles can hit you over the head with what’s possible and still give you a good challenge. Glitch Games is a developer with lots of experience in tricky puzzles that use puns and wordplay to stump players. But there’s never a question of what you can actually do. In The Franz Kafka Videogame, you’ll spend way too much time just trying to figure out the possible interactions on each given puzzle.

I’ve no problem with games that reward experimenting with the environment. Fireproof’s The Room games are tactile and you need to treat everything like its real world counterpart, twisting and pulling and turning instead of just tapping. You’re rewarded for playing with things and seeing what happens. But there needs to be consistency. If you want the player to pull something to actually pull it out, then that’s how it should always be. But to have tapping work most of the time but not all of the time? It just feels like a cheap trick. 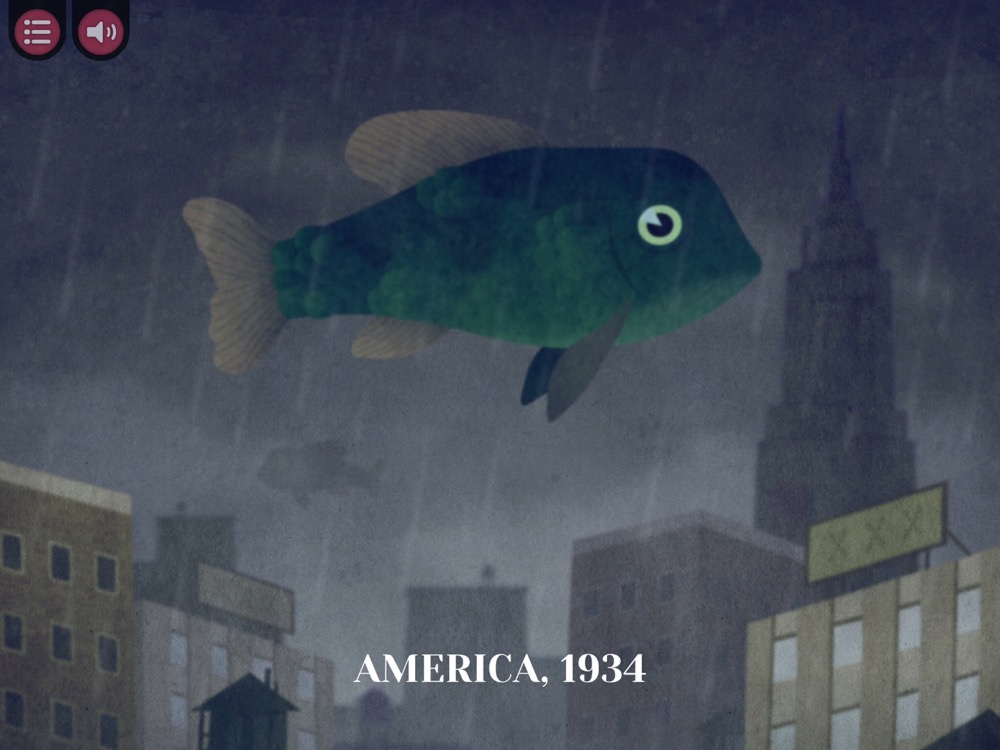 As much as I wanted to like The Franz Kafka Videogame and recommend it, it’s hard to do so considering how few of the puzzles felt truly satisfying for me. If you don’t mind needing hints all the time and just want to see the surreal artwork, atmospheric environments and quirky storyline, it might be worth picking up. But if you get frustrated easily and like your puzzles to feel truly logical, you aren’t likely to have a good time here. The cheap puzzles far outweigh the clever, satisfying ones, making this a very hard puzzle adventure to recommend. But if you still want to give it a try, you can download the game here. There’s no iCloud sync, but it works well on both iPad and iPhone thanks to its zooming feature.

And if you’re stuck on any of the puzzles, try my step-by-step walkthrough guide.

Thirteen and Half Cats: Walkthrough Guide