Will O’Neill’s Little Red Lie is not an easy game to get through. And I don’t mean that the gameplay is challenging. In fact, it has very little gameplay to it and I imagine many would not consider it a game at all, rather more of an interactive novel. But even the interactivity is minimal. No, what I mean is that the subject matter and story are emotionally draining. And it’s not a short game, either, considering it’s mostly text.

The game takes place in Toronto and follows two main characters going through their own separate and unconnected storylines. Sarah Stone is a thirty-something-year-old who lost her job but has been lying about it to her family because she doesn’t want them to worry about her on top of their own problems. Her parents are aging, her mother is terminally ill, and her sister suffers from depression and lives in their basement. Where the game starts off, we learn that the parents can’t afford the medical bills and support their sick daughter. They’re counting on Sarah to help, thinking she still has a decent job, but she’s actually in debt herself. If you think that all sounds depressing, it only gets worse from there.

Contrast that with Arthur Fox, a well-off businessman who’s never wanted for much in in his life, as he’s always had plenty of money. He only cares about himself, but pretends to care about the people he sells his self-help books to. He very much reminds me of Donald Trump, though I imagine if he wasn’t so prominent at the moment, Arthur Fox would just be any ol’ seedy snake oil salesman. He’s irresponsible, believes money will buy him out of every problem, and that money is the most important thing in this world. And if you don’t have money, it must be your fault. He’s also sexist and racist and probably every “ist” you can think of. He’s generally not a nice person, but he seems to know it and attempts to make excuses for it. 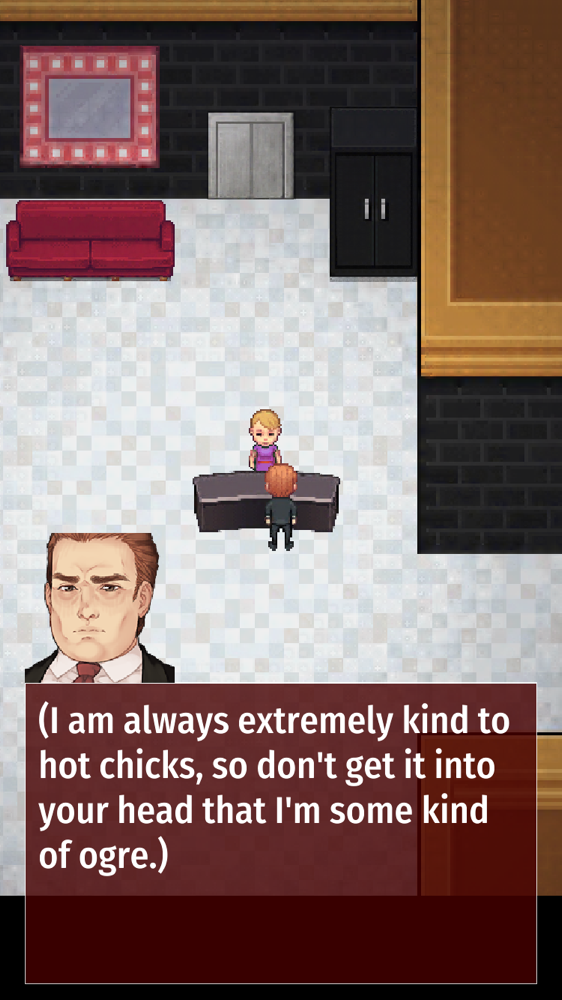 Both characters lie a lot to the people around them. And that’s where the title comes in. As the reader, you get to see when they’re lying, as their lies are highlighted in red text. And we’re also privy to their thoughts, not just what they tell others. For Sarah, her lies are usually used to avoid hurting those she loves or for trying to come off less pathetic than she feels. With Arthur, his lies are to sell products, convince women to sleep with him, or get himself out of a sticky situation that his carefree attitude got him into. There’s no doubt that we’re supposed to be sympathetic to Sarah and despise Arthur. But as despicable as he is, he does provide some food for thought. 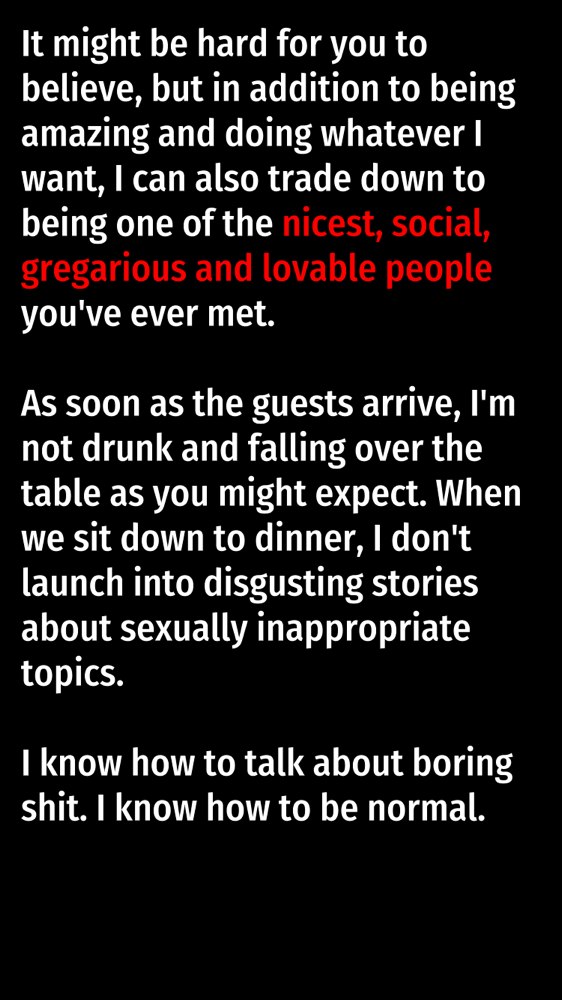 The game is broken up into parts that are just white and red text on a black screen, and sections where you control a little sprite and have to interact with your surroundings. The text unravels bit by bit at the touch of your finger. Thankfully, the game doesn’t guess how much time you need to read and instead lets you read at your own pace. This is basically the size of a book, as it took me over six hours to play through it and I was reading at a pretty brisk pace. And I appreciated that the game was in landscape mode on PC but was adapted to fit in portrait mode on iOS to make it fit in one hand. Since you can play the whole game with one finger, it makes sense and was a very welcome change. iCloud saves and landscape on iPad would have been nice, but I guess you can’t have everything. 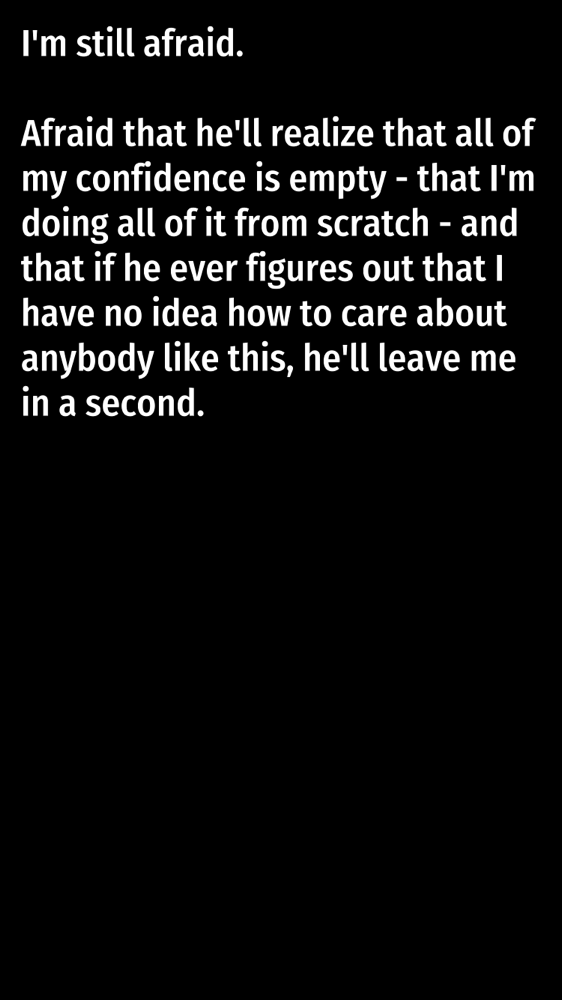 The portions where you control a sprite felt a bit awkward. You can swipe your finger anywhere on the screen to move your character. Then, when you’re facing an interactive item, you tap the screen twice to interact with it. There’s also a LIGHT button that highlights hotspots for you so you don’t waste time pixel hunting. The problem is, I often got stuck behind things when trying to move, or interacted with an item a second time without meaning to. Thankfully, there are no time-based puzzles or any clock to race against. So control issues were minor frustrations at the most. 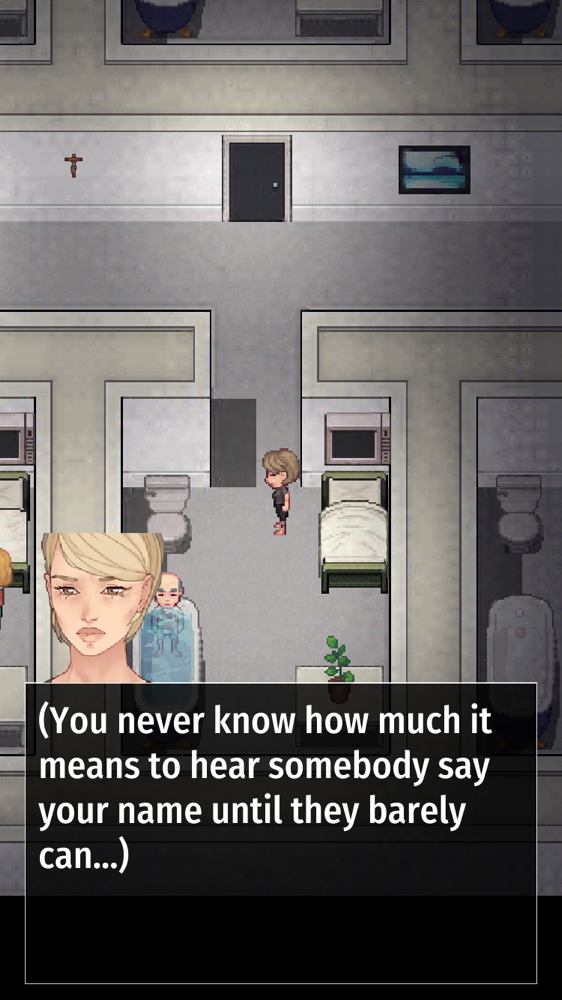 Sometimes, when a character is having a conversation, they have some red text between parentheses. These look like choices, and the game does make them appear that way. Usually, if you tap on one of the three lines of text, it will seem as though you selected it. But for most of the game, choice is an illusion. No matter what you choose, the character seems to say what they want. But the red text does give you a deeper look inside their head, as it’s what they’re thinking as they’re deciding what to say. Often, it’s what they want to say but won’t. 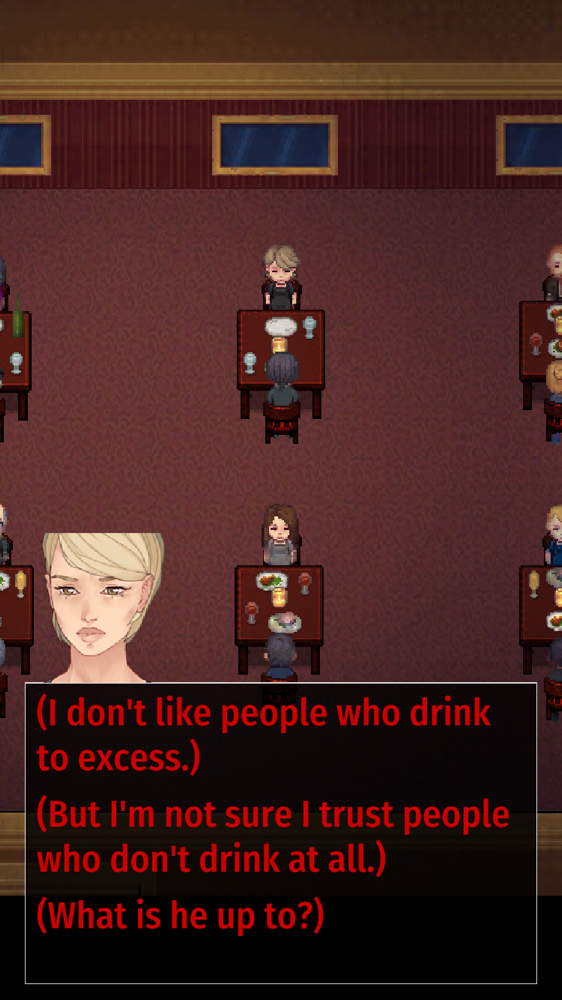 There’s also a narrator that I won’t say too much about, because it will spoil some surprises. But she breaks down the fourth wall at times and even gives you some choices at the end that finally make a difference. This is where you control what kind of ending you see. And I messed up and didn’t get the full proper ending. I have mixed feelings about this, as Sarah’s story left on a bit of a cliffhanger for me and I do hate that I would have to play through the whole six-hour game again to get another attempt at that one dialogue tree. But then again, the game is full of people whose situations downright suck. So maybe that’s the whole point — missing a bit of the ending is not the worst thing in the world? But is a game supposed to be as unfair as life is? And somehow, I think one of the game’s messages would be that life’s too short to spend another six hours playing through it just to have another go at the ending. 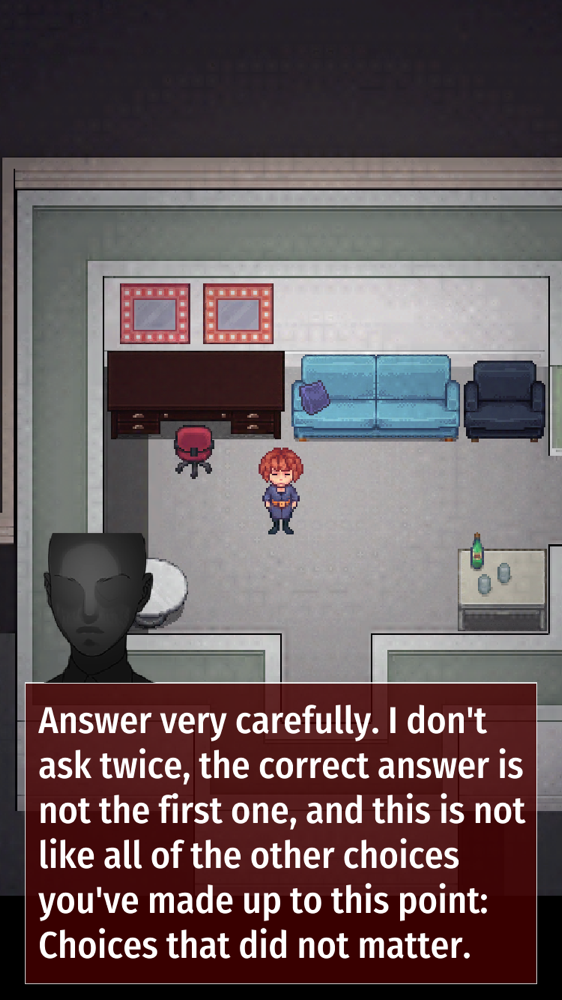 Yes, the game is long and emotionally draining. I don’t think it needed to be quite so long to get its points across. It’s written well, but could have benefitted from some editing. But in the end, I am glad I stuck with it. It gives you a lot to chew on. I saw some parallels between Sarah and her family and my own. I think it would be hard not to see something of yourself in these characters unless you have a perfect, easy life without any troubles. Maybe then you’d relate more to Arthur? 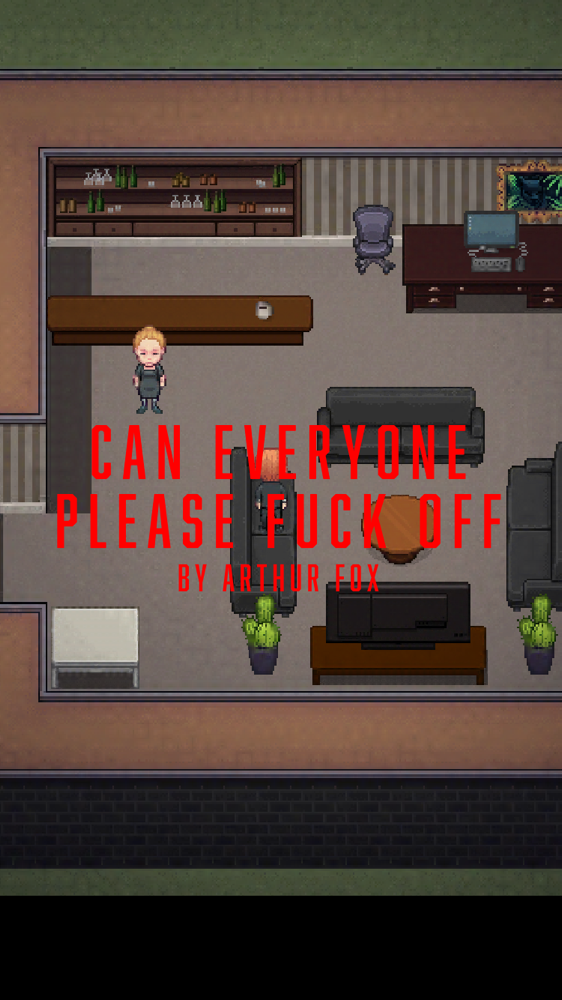 There were a lot of moments in the game that caused some self-reflection. Some of them made me feel downright awful about myself even, such as how I’ve let some relationships become superficial. And the correct response is probably to go out and fix all that, but it’s easier said than done. I’m still reflecting, though, and that’s something. The game is very determined to show you that life is not fair. Bad things happen to good people and good things happen to bad people. But even if things seem bad, someone else has it worse than you. These aren’t big comforts, and the game is not going to give you all the answers. All it asks of you is that you absorb it and maybe take something away from it and do something different in your own life. 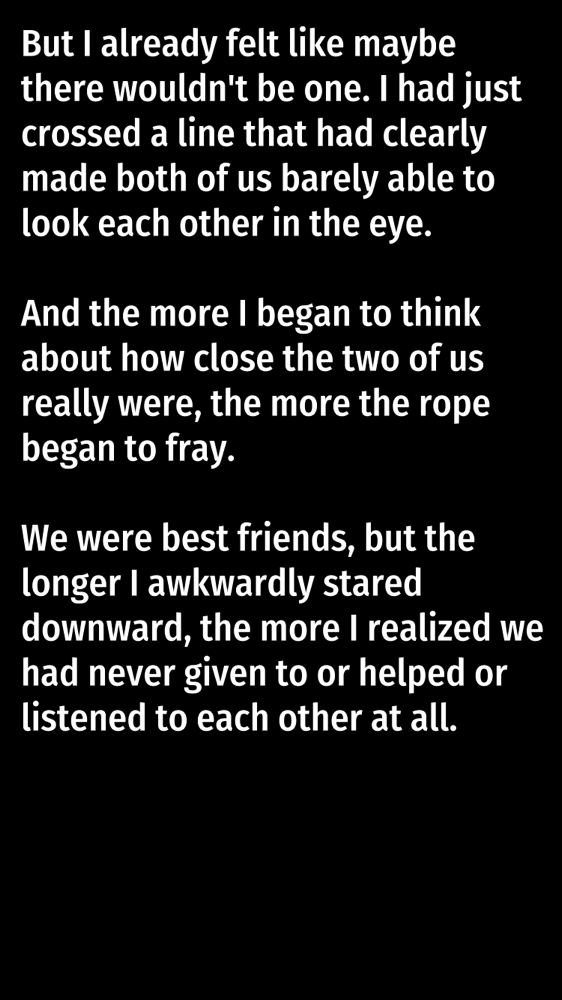 Little Red Lie won’t be for everyone and yes, it demands a lot from you. But if you’re willing to invest the time and emotion to it, you’ll find a game that’s unlike any other. It also has quite a few surprises up its sleeve in case you think it’s just trying to preach to you. Arthur Fox provides some much-needed entertainment when Sarah’s story gets too heavy. Just try not to think about the fact that someone similar is currently the president of the United States, or it might just feel too real. If you’re ready to take the journey with Sarah and Arthur, you can download the game here.

You can also see my full walkthrough here.