Uri: The Sprout of Lotus Creek
By: Γò¼├║╬ô├▓├▓Γö¼├¡Γö¼ΓòíΓö£┬╜Γö£┬╗Γö¼Γòí╬ô├▓├▓╬ô├▓├▓ (Dream Tree)

I’d been cautiously keeping an eye on Dream Tree’s puzzle platformer, Uri: The Sprout of Lotus Creek up to its release. The teaser videos didn’t give a good idea what the game would be like, but I was curious about the cencept of using the user interface (UI) as controls. I also liked the look of the game, as it has that Monument Valley vibe to it. Since it released at only $1.99, I decided to take a chance on it despite my limited knowledge of it and the shaky English translation in the App Store description. There will be spoilers below, so if you want to experience the pleasure and pain of solving these puzzles for yourself, stop reading here.

Things started off fine. I got through the first area without a hitch. I seemed to be grasping the mechanics so far. To start off, your character, Uri, moves automatically and you need to put things in her way to help her achieve her goal. Early on, this just means grabbing the status bar (which also works as a “restart” button) and placing it over gaps so she can use it as a bridge to cross. Each time you move the bridge, a chunk falls off of it so it gets shorter and shorter. 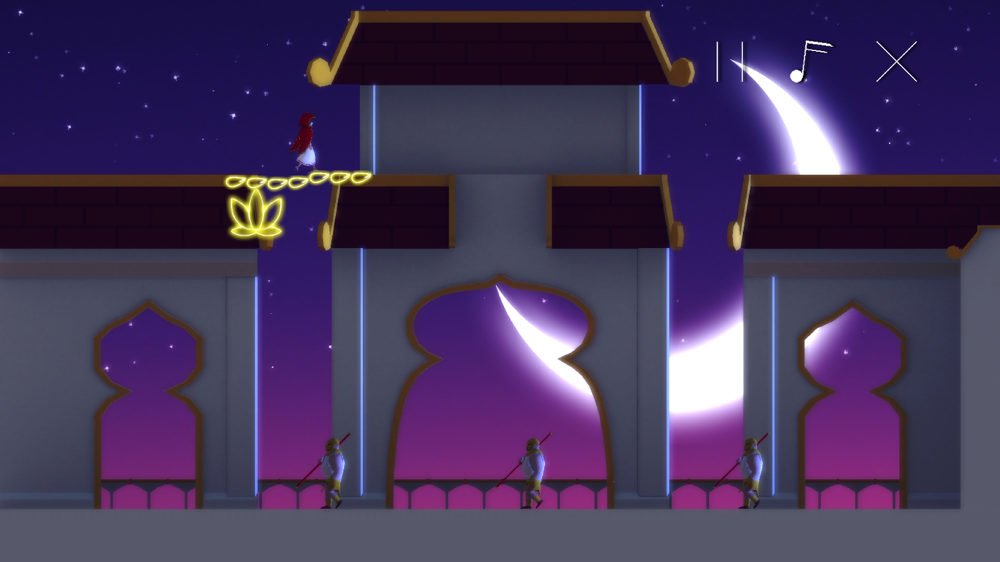 But the second area introduces guards, and it’s hard to tell what the goal is on one puzzle. There’s a gap, then below that three chandeliers with guards below them. If you drop through the first gap, you land on a chandelier and continue heading right. If you place the bridge there, you cross to the second chandelier. And here’s where things get confusing. You can do nothing after that and Uri will drop off the ledge to the right of a guard who’s facing you, the player. Even though he’s not looking at Uri, he grabs her anyway. Now, the next chandelier is crooked, so you can’t make a bridge to it. If you try, Uri just hits it and walks back the other way. I messed around for about fifteen minutes or so, trying to figure out what the game wanted from me. I tried timing the walking guards so I landed behind them. I tried somehow getting on top of the broken chandelier. Nothing worked. I gave up. You can see my agony in this video:

Then I looked online and found an older video from a few months back that shows this level with the chandeliers placed differently, forcing you to use the bridge twice before you get to the edge of the second chandelier. At this point, your bridge would be a small nub, so if you try to use it, Uri would walk to the edge of it and fall just a little bit more to the right of that guard. He won’t touch her and she’ll continue walking. 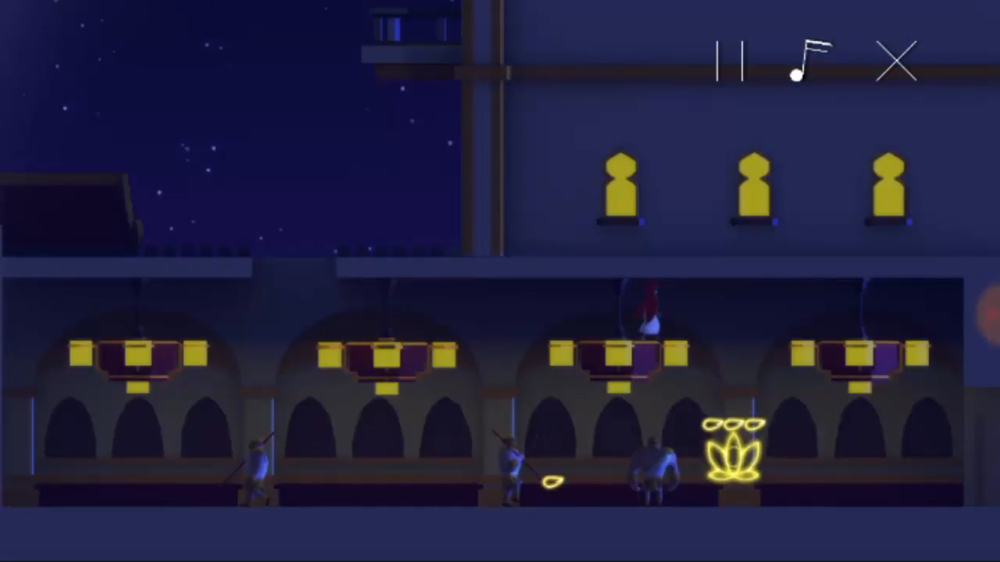 The problem with the current version is that you still have a full bridge to use and the game has so far not given you any indication that you might need to shorten it on your own. The guards’ behavior has also not been clarified yet. So it’s altogether poor signage, expecting a player to try something without a real goal in mind. I just think it’s bad puzzle design. There are a dozen different ways they could have at least made the goal clear so the only question is execution. You can see how it’s solved in this next video. I also moved on to the music note/jump mechanic, and then got stuck on some bugs and more poor signage later:

At the end of that video, my controls disappeared because I made Uri run off the screen in the wrong direction. So I quit there. But I was curious, so I came back for more on my own. There’s a guy to the right that seems to yell at Uri and point at the spider, and then the boys yell at her and point in the opposite direction. I managed to save the spider without really knowing what I did. So I played with it more and realized that the game wanted me to use the music/jump icon to make the bell by the door ring. The bell is a little tiny thing on my iPhone and I didn’t even realize it was there. So I’m not sure why I would have thought to drag the music note there. I only realized it after accidentally solving it several times. You can see that in this next video:

Again I quit because I’m not sure what the goal is. A guard is in the way and I now have a longer bridge, but nothing I do seems to allow me to get around the guard. I think part of the problem is that the game allows too much freedom. You can place the UI elements anywhere on the screen. In theory, that might be fun, but I think in practice it means there’s zero guidance as to what the game wants from you. I love puzzles, and there is an interesting idea here, but for me, it fails miserably in execution. Juggling UI elements around the screen without any real idea of what Uri can or can’t do just makes for an unpleasant experience.

This is probably the end of my journey with Uri, as I’m not masochistic enough to deal with it. But feel free to check it out if you need some torture in your life.