I’m not going to mince words. When I first heard about and saw screenshots of Ron Gilbert’s Thimbleweed Park, I had some excitement mixed with dread. Dread that it would mimic old retro games to a point that wouldn’t be enjoyable for me. I’m very sensitive about games wasting my time, and a list of action verbs on the screen was not that appealing to me.

I didn’t grow up on LucasArts games. The point-and-click adventures I played were those like Broken Sword. So I don’t have any nostalgia for Maniac Mansion, the retro pixel art or the list of actions on the screen. I like modern point-and-click adventures and their way of simplifying things so you can tap on a person to talk and drag an item to use it with something else. Having to tap “Pick up” or “Look at” or “Use” instead of just tapping on the item sounded like a nightmare when at any point I have ten different games fighting for my attention. 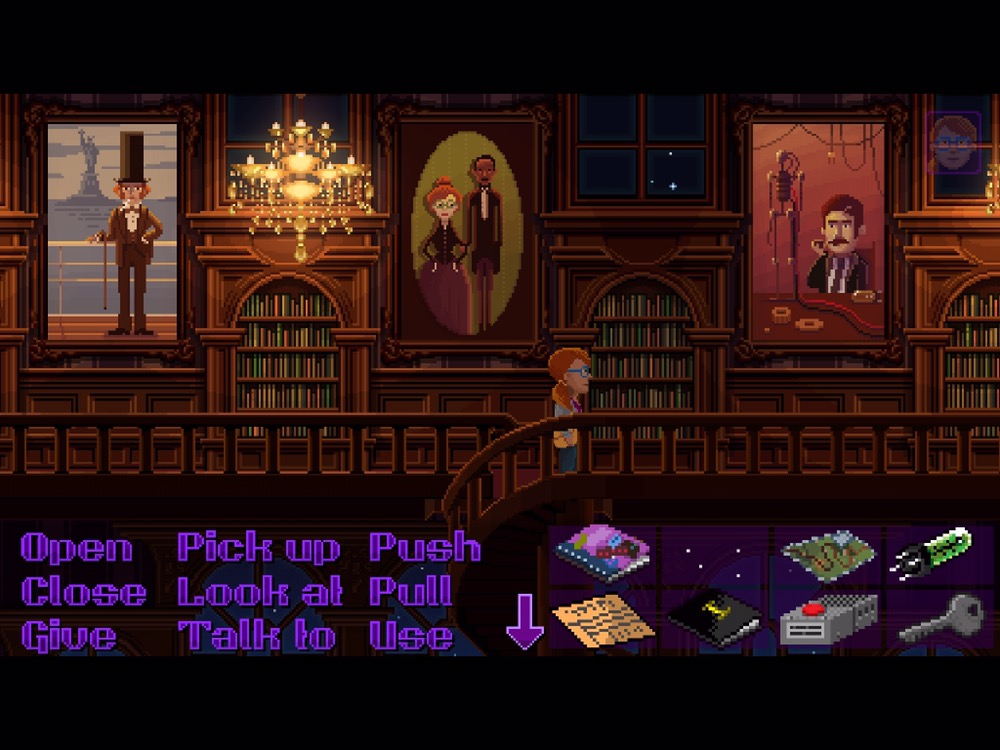 But I’m happy to say that the game has won me over. And over. And over. I keep stopping to think (or tell someone), “wow this is really great.” The puzzles are clever, the humor just doesn’t stop, and I can’t believe I ever considered not playing this game based on appearances.

As I mentioned in my first impressions piece after about forty-five minutes into the game, many pains have been taken to make the game much more user friendly than it appears on the surface. But as I played more, I discovered that those action verbs aren’t even necessary as often as I expected. Most actions can be achieved with double-tapping. And I may be mistaken about this, but I think the game learns from your behavior. For instance, there are specks of dust throughout the game that you can collect. The first few times, I swear double-tapping made me just look at it. But at one point I noticed that double-tapping picks it up.

You’ll still need to use the on-screen verbs to mix two items and perform less common actions. But you can talk to folks with a tap and open doors with a double-tap. Now, you still might ask, “but why are the actions even necessary?” And for a while I was thinking that, too, especially since it covers so much of the screen. But then I encountered a few instances where it really made sense and could see it’s not just arbitrary. But what really changed my mind is that there’s a character with different actions than the others. This wouldn’t be possible with simple tap and drag controls you see in most other games. So much character would have had to be sacrificed to make it work that way. So even I, once dead sure that these action words were an unnecessary gimmick, have come to appreciate them. 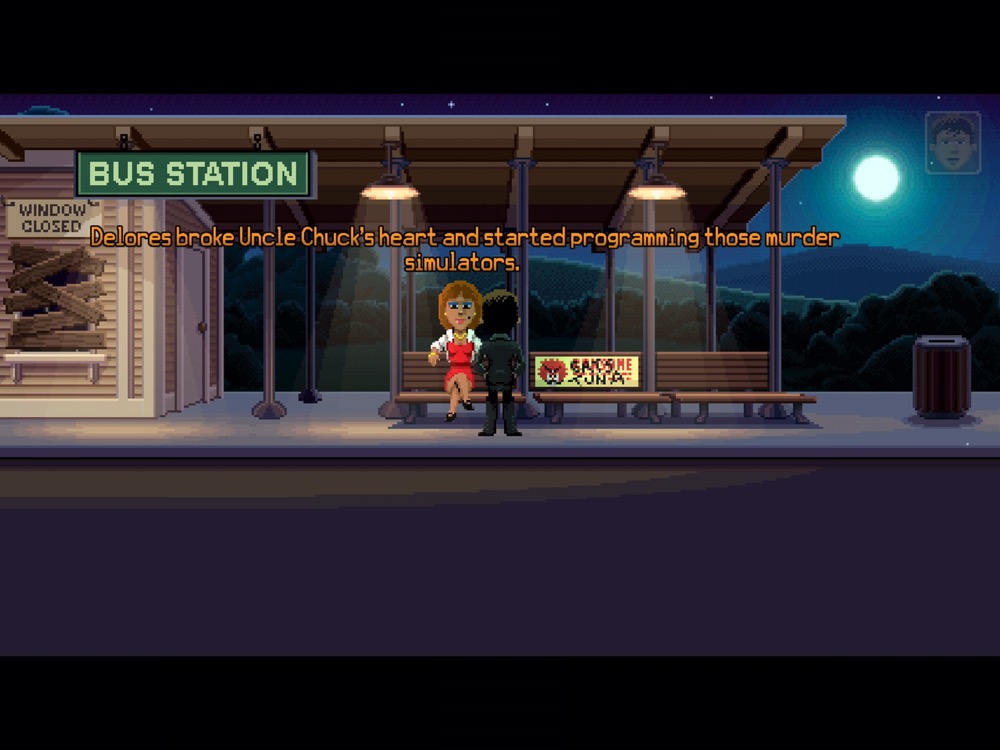 I’m about six hours in, which has involved some time being stuck, so I’m not sure where that puts me. But I’m at the point where I have five characters to play and they each have to-do lists. Two are special agents. One is a mean-spirited clown, while another is a young aspiring game developer. And they have to team up sometimes to get things done. Again, this seemed like it might be a chore early on, but once fast travel is introduced, getting stuck is not a big deal. You’re not walking all around the map, but teleporting. And you can even skip dialogue by swiping the screen with two fingers, in case you’re too impatient to let the characters talk slower than you can read. 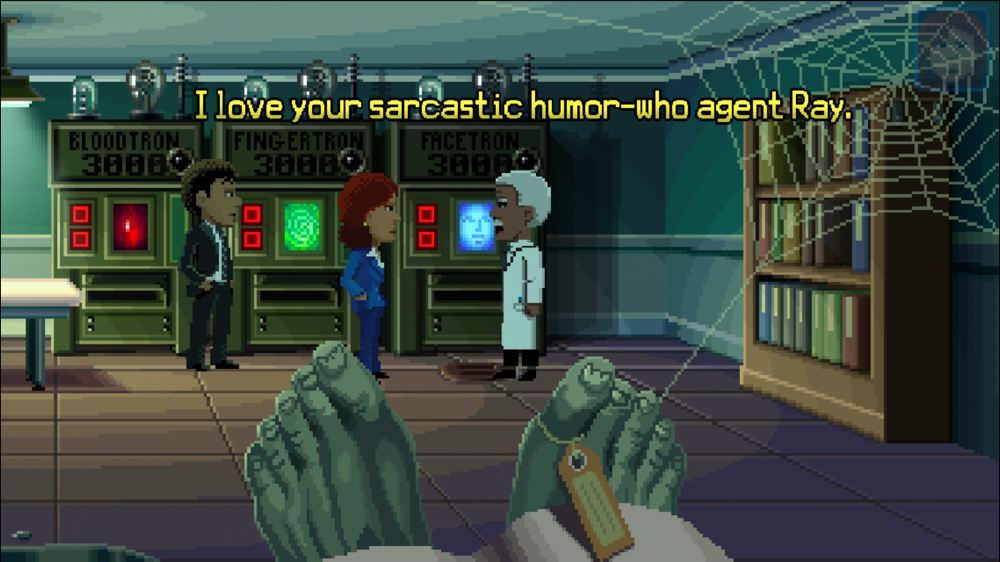 So bottom line is that I’m so glad that the game turned all my expectations upside-down. I’m enjoying the story, characters, humor and puzzles not in spite of the user interface, but because of it. So if you’re like me and cringe a bit at retro point-and-click adventure games, don’t make the mistake of skipping Thimbleweed Park over it. This is just such a well-crafted game in every way, with so many little details that show the care that went into it. There’s even a hot-spot locator for those allergic to pixel hunting. My only real complaints as of this moment are lack of iCloud sync and full-screen support on iPad. I would love to take this with me everywhere I go, but I’m playing on iPad for the larger screen.

Anyway, I’m trying not to spoil too much here, so I’ll go get back to playing and you should go buy the game if you have any interest whatsoever in point-and-click adventures. But for those who need more convincing, I’ll have a full review later that covers a lot more than the controls once I’ve completed the game.

Dark Meadow: Game Review: Is it more than just a re-skinned Infinity Blade?