I’ve never been that into the original solitaire, especially when I have thousands of more exciting games in my pocket. But I do like solo card games such as Onirim and Miracle Merchant, so I’m always willing to try another solitaire-inspired game. I’m also a big fan of Zach Gage’s Typeshift, it being the only game at the moment that I log in every day to complete the daily challenge. So when I heard of his new game, Flipflop Solitaire, I had to check it out.

For the sake of this review, I’m going to assume you already know how to play Solitaire. What Flipflop does is, well…flips everything you know on its head. You have much more freedom, as you’re allowed to stack cards in both ascending and descending order. That means you can place an 8 over a 7 and then another 8 over that. For instance, a stack can go 6767897876. And you’d be able to lift that whole stack up and move it to either a blank space or to a 5 or another 7, as long as they’re all of the same suit. On top of that, you have an unlimited undo button like in Spider Solitaire, which serves to make 99% of the games (according to Gage) winnable. You can see this handy chart he made if you need some clarity. And a reminder to visit the dentist. 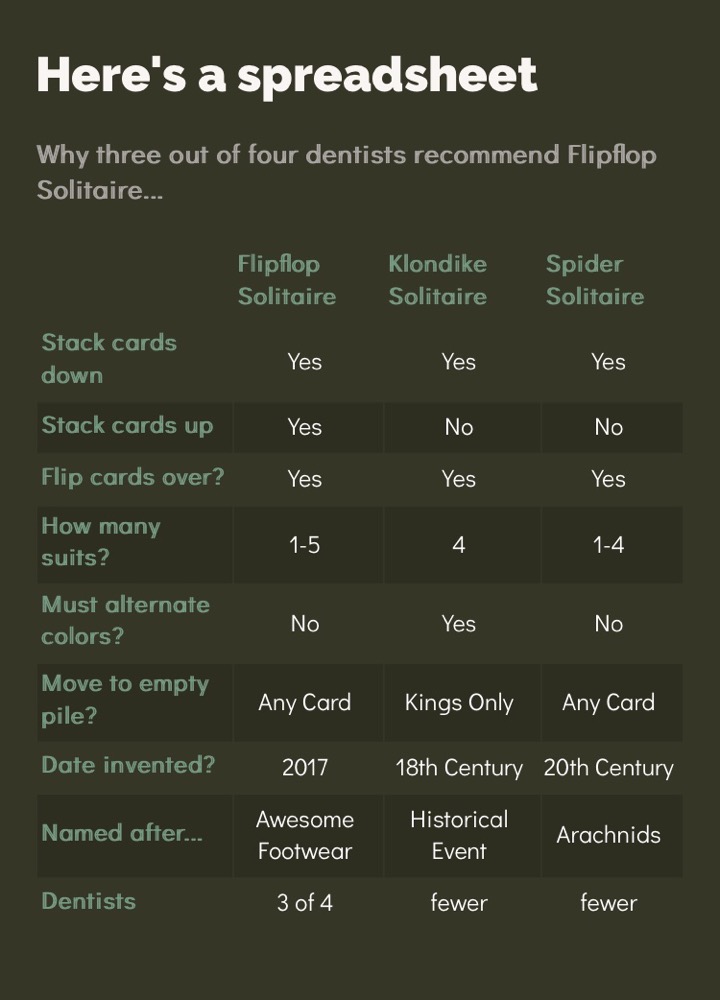 Flipflop Solitaire also has several game modes, varying in difficulty. You can play with four sets of one suit, making things very easy and a good intro to the game. It’s also fun to try and beat it as quickly as possible for a high score. Then, you can play with two suits, three suits, four suits, and the hardest is five suits. There’s also a single suit extended that just gives you five sets of the same suit instead of four. I find myself sticking mostly to either single suit or five suit. Single suit is quick and I keep trying to climb the leaderboards with it. Five suits gives a proper challenge even with the flip-flopping and undos. A game usually takes me between five and ten minutes, with my best score around four minutes and harder games taking as much as thirty minutes. 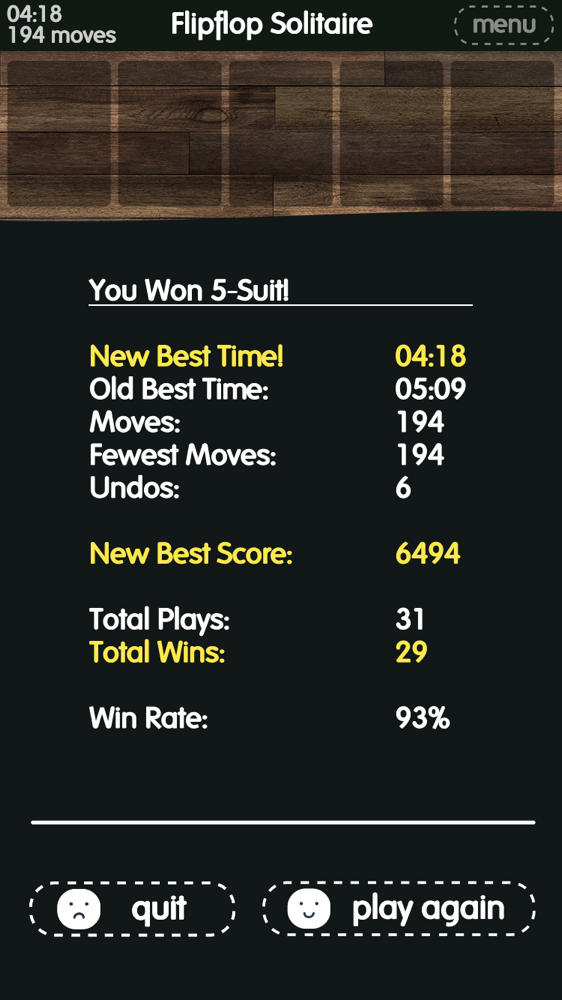 Each game is scored based on how long it took you to complete, how many moves, and how many undos you used. There are tons of achievements and leaderboards for everything, so if you’re competitive, you’ll have plenty of scores to try and beat. At first, I thought the win/loss ratio was silly, as the undo makes it virtually impossible to lose. It seemed to just be forcing me to complete games even though I knew it wouldn’t give me a high score. I thought it was a waste of time. And then I encountered a seemingly impossible single suit game. I had restarted it several times and couldn’t get a queen to show up. I was almost sure that it was an unwinnable game. But since forfeiting would affect my perfect win rate, I kept working at it, determined to try every possibility. And finally, after almost a half hour and more than five hundred moves and four hundred and eighty-eight undos, I managed to beat it! And that changed my entire opinion on the win/loss ratio. That was probably the most fun I had with the game, especially with the single suit mode. Those near-impossible games might be rare, but I’m glad the game gives me an incentive to work at them instead of just giving up. 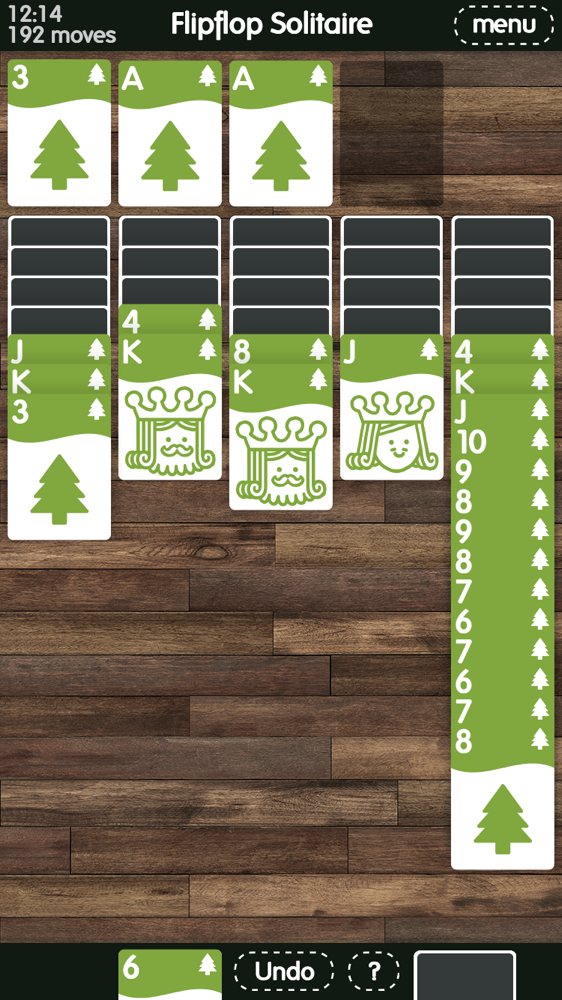 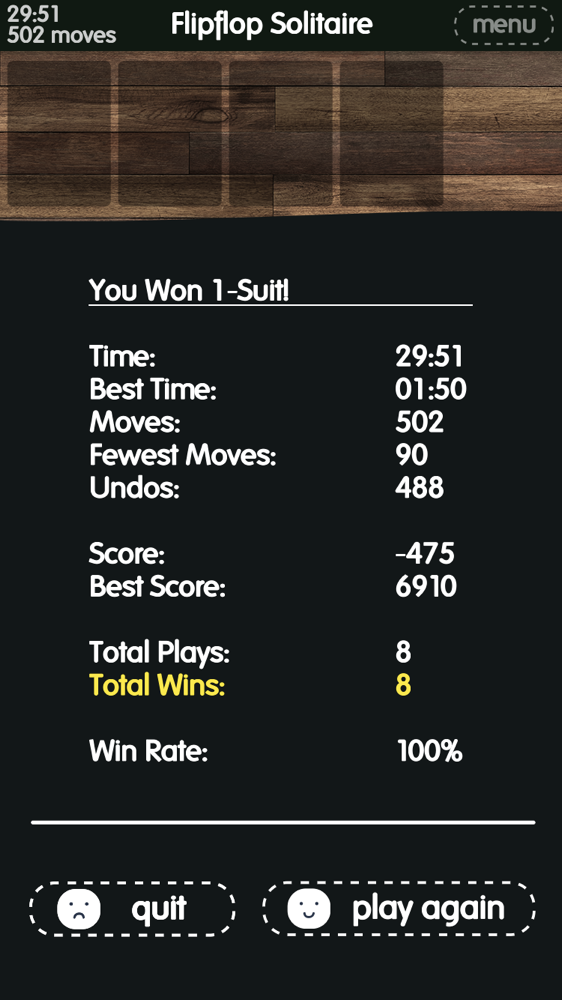 I’ve been spending a lot of time with Flipflop Solitaire over the last few days. Gage has a knack for making perfect one-handed games you can play anywhere, and I’m always looking for more of those on my iPhone. I don’t know yet whether it will have lasting power for me, but for now I’m enjoying it, especially the five-suit mode. He also just added iCloud sync for those who play on more than one device. Since it plays in portrait mode on iPhone but landscape on iPad, I’m glad I can break out the bigger screen when I feel like it. He also just added a social share button that was missing at first, for those who like to brag about their scores. And I thought there was no way to speed up the end game animations, but Gage pointed out that a quick double-tap will get the job done. So there’s really nothing to complain about here. I have encountered a few bugs that he’s been squashing pretty quickly, but one of them left me with false losses that I now have to live with forever, sadly. At least I know in my heart of hearts that I haven’t lost a single game yet.

Flipflop Solitaire renewed my interest in the game and is much more approachable than the original. If you find regular Solitaire too hard or too luck-based, give this one a try. It gives you more control and the existence of an undo button means you can move at a faster pace instead of worrying about each move. It will affect your score, but so will taking too long to think. The price is right, too, as it’s free to try out and play forever with the occasional ad. But you can pay $2.99 to remove ads and unlock more modes, such as the five-suit game, which, as I said, is the hardest. There’s, quite frankly, no reason not to check it out. So go grab the game here and try to beat my best scores!