Hi everyone. Pull up a chair while I talk about the games I’ve been playing over the last seven days in the latest installment of My Week Unwrapped. I never know what to say in these intros, so I’ll keep it short. The end of the year is almost upon us and I need to start thinking of my Best Of list. Thanksgiving is this week and there’s a lot to be thankful for — like amazing games keeping us distracted from the apocalypse. This week is a mixed bag, but still some great games to check out. I’m also playing The Inner World – The Last Wind Monk ahead of release and loving it so far. If you haven’t played the original yet, there’s still some time before the sequel hits! I highly recommend it. Anyway, without further ado, here are the games I’ve been playing this week.

I rather enjoyed the first Faraway: Puzzle Escape, by Pine Studio. It’s a puzzle adventure game that’s designed to be played with one hand in portrait mode. It also had some clever puzzles, especially those involved in finding the third letter in each level. So when the sequel, Faraway 2: Jungle Escape, released this week, I jumped right on it and spent the $2.99 to unlock the rest of the game. Like the original, you get the first nine levels for free with the occasional ad, and you can pay once to unlock the second half of the game and remove ads. It’s a generous and fair model that I hope will get some support. As the name suggests, this one takes place in a lush green jungle instead of the desert. I’m almost halfway through and enjoying it for the most part, with a few niggles here and there. But I highly suggest picking it up and at least giving it a try if you like puzzle games. I’m also working on a walkthrough here that includes the letters for each level.

I’m still playing South Park: Phone Destroyer and I kind of hate myself for it. I mean, I was winning this PVP match by a mile and my opponent summons a Manbearpig right before I could kill him. I’ve never seen this thing before and I was suddenly massively overwhelmed by it. Yeahhhhh 100% balanced game. Sure. Anyway, that was after I wrote up this review about the game. I’ll probably continue playing and hating myself for it. 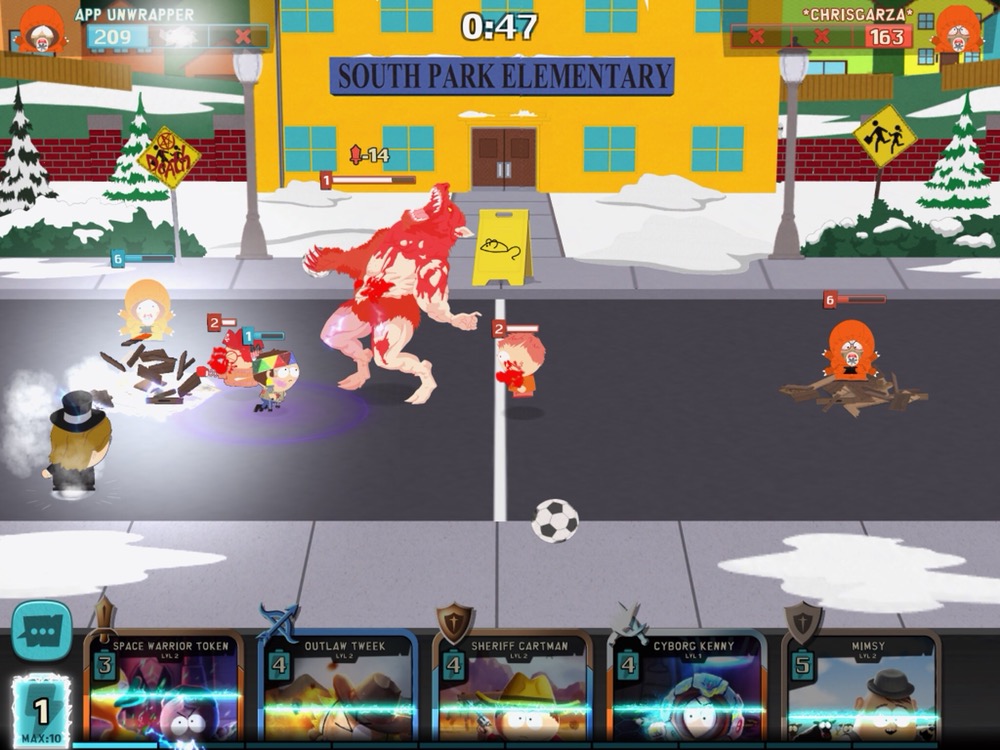 Universal Paperclips was first a free browser game. I heard about it when it first released, but just assumed it had to be played on PC. I’m also not a big clicker fan, so I just ignored it. But with its release on mobile this week, I wanted to give it a chance. It turns out it plays on mobile Safari if you want to try out the free version before buying the app. I ended up spending a lot of time on it, much more than planned, but ultimately quit. It just wasn’t for me. You can read more of my thoughts here.

I Am The Hero

Crazyant’s I Am The Hero is a side-scrolling brawler that sports some stylish pixel art. It’s only $1.99 and I really like the artwork, so I picked it up and spent a little time with it. Unfortunately, I was finding the in-screen buttons a little too easy to miss when I was trying to pay attention to the action. I might give it another try if they ever add options to resize the buttons. But for now, it’s just not working for me. My fingers don’t land where they should unless I look at the buttons, and that’s not a good way to play a game. But perhaps if you have an Mfi controller, you’ll enjoy it more. In any case, you can check out my gameplay video below to see if it looks like something you’d like.

I wrote about my experience with the beta of Heart Shaped Games’ Brave Hand a few months back. It’s a heavily luck-based solitaire card game with gorgeous digitally painted backgrounds you unlock through playing. Back then, I found the game a little too reliant on luck, but I was still enjoying it, especially with the artwork. I already wrote about the gameplay in the article above, so I’ll let you read that. But between the beta and upgrading to a new phone, I lost my progress, including all the themes I had unlocked. Starting over, I didn’t feel as compelled to keep playing and get back to where I was. I was hoping it might have gotten something to make it more strategic and less about luck, but I don’t really notice any changes to gameplay. Still, it’s free to play with the occasional ads, so it’s worth at least trying out. If you like it, you can pay a one-time price of $2.99 to remove ads and unlock two more gameplay modes.

Blindflug Studios released a node-based game like Lara Croft GO recently, and it appears to be 100% without any catch. I’m not really sure why, but it’s self-described as a “sci-do stealth game set in Zurich.” It’s fully voice acted, but in German, so you’ll have to read the subtitles if you don’t speak the language. One thing that also sets it apart from other GO games is that it’s not always turn-based. Even though you swipe to move from node to node, enemies move in real time, hence the stealth part. You do collect tools to help you get past them, but you do need to move quickly sometimes. So it’s less relaxed than these games usually are. It seems well-made, though, with a futuristic atmosphere. And you can’t beat the price. Even though I’ve only played through the first level so far, I think it’s safe to say you should at least download it and give it a GO.

Not much to see here. Mechbox 2 added a tutorial level a few weeks ago and I finally got to making a walkthrough for it.

And that’s everything for this week! I’ve also been playing a lot of Flipflop Solitaire on my down time. Probably too much, as I have so many other games to play! But anyway, let me know if you decide to pick up any of these games and I’ll see you back here same time next week!