1. Pick up all the pieces of wood. Place them in the right slots in order to form a bridge. Cross over.

2. Pick up the machete. Use it to cut the two vines and pick them up. Tie them together.

3. Take a look at the walls to see images of the statues. You need to copy those poses onto the actual statues.

4. Throw the vine rope up onto the hook that appears and go through to complete the level.

3. Pick up the bundle of straw.

5. Find and pick up the eight stone tiles.

6. Place the tiles on the wall to form a picture. 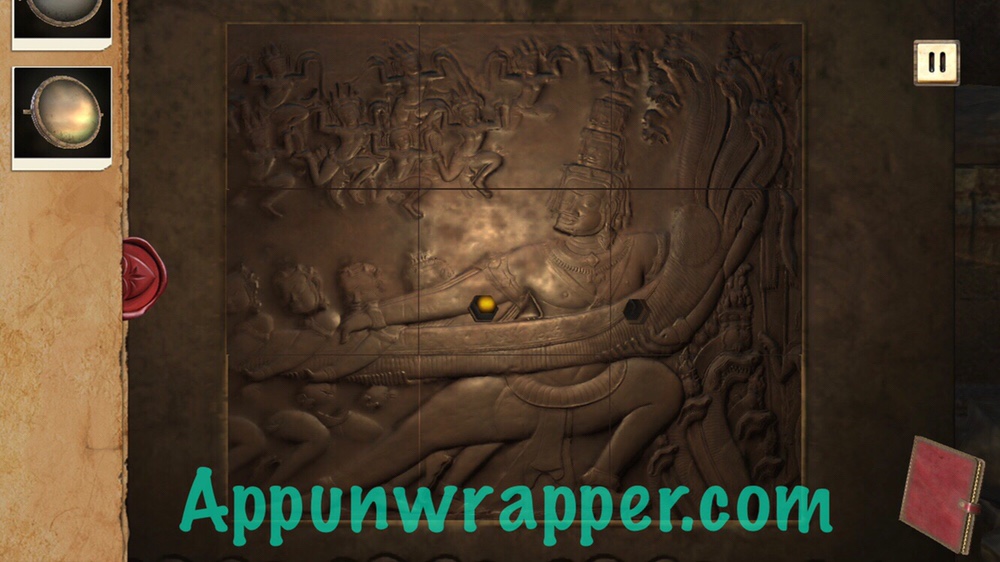 7. Push the elephant statue into the wall and take the gemstone.

8. Place the gemstone in the slot on the forehead of the right stone head.

9. Find the end of the rope. Place the bark down, then the straw, then the stick. Move the stick back and forth to create friction, starting a fire. The rope will burn and mirror stands will appear.

10. Place the four small mirrors in the stands. Rotate them so the beam of lights transfer between the ones on the edge and the two middle ones. Then, point the two middle mirrors at the eyes of the middle statue to complete the level.

1. Pick up the long stick to the right and use it to press the floor buttons in this order: 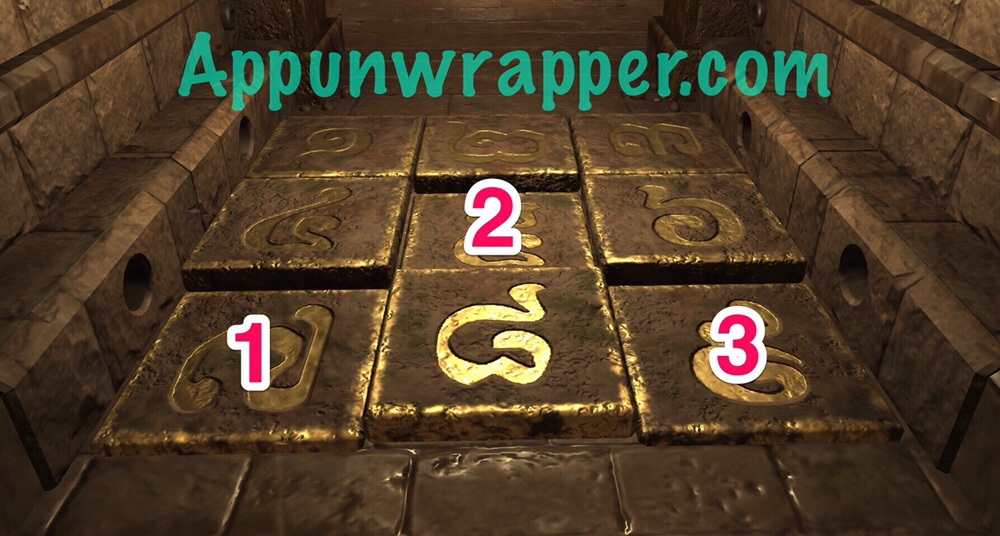 2. Continue on. Solve the tile-sliding puzzle on the wall. 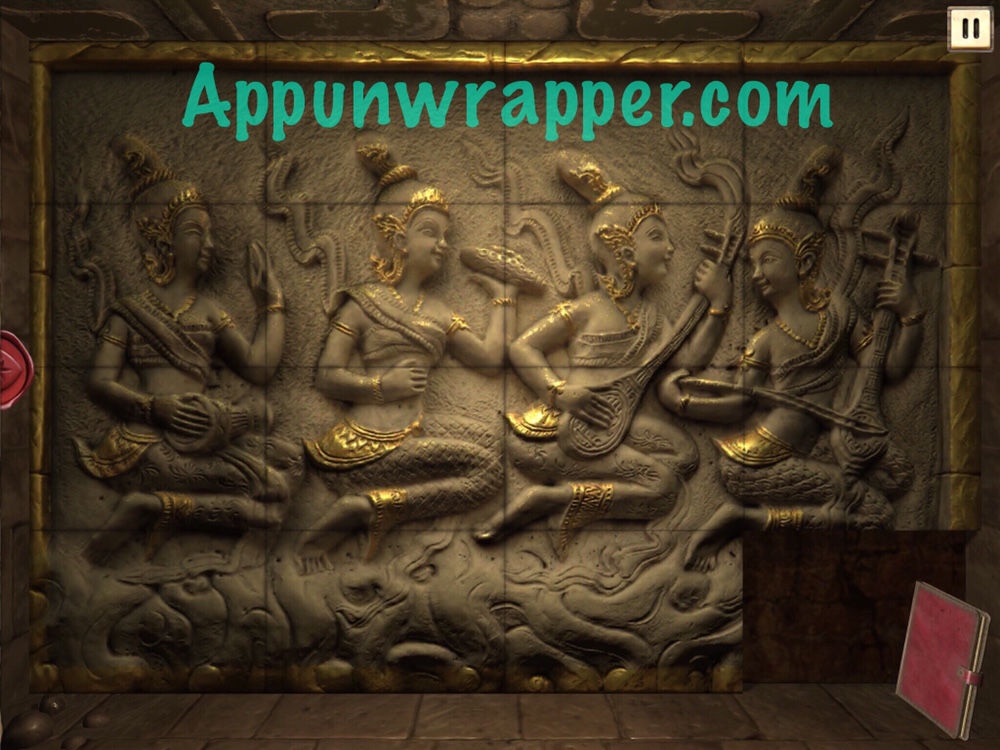 3. Take the torch off the wall and use it to light all the dragon heads. The fire should spread to the center of the room and the ceiling will cave in.

4. Open the chest and take the letter and photo of the professor. Then, you have 60 seconds to escape. A gate is blocking your exit. So instead, stack rocks up to the hole in the ceiling and climb up. 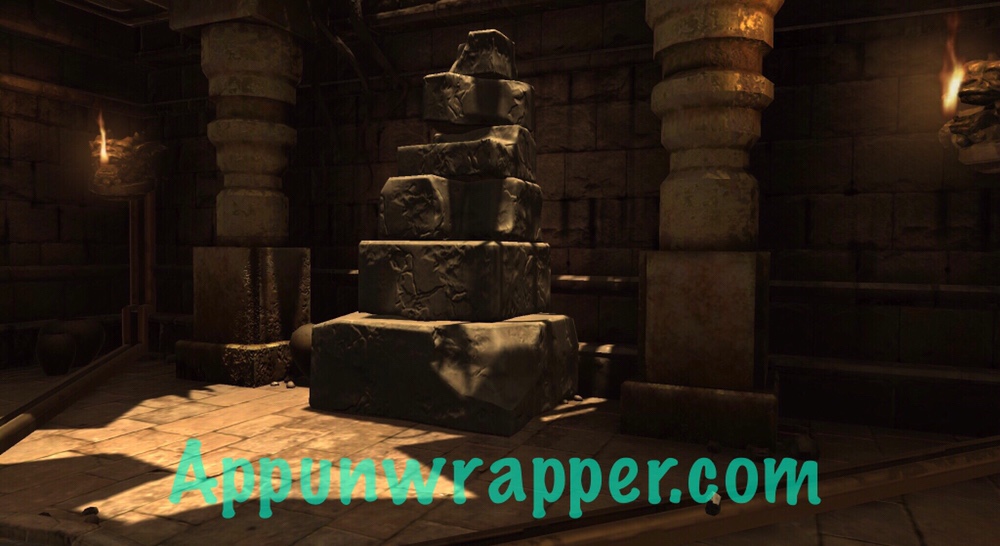 1. Pick up the hammer resting on a crate to the right.

2. Go to the cucumber merchant. This next part is a little tricky to figure out at first. He wants a hammer. But you can’t just give it to him. Place it on the table in front of him and turn the table so the cucumber is on your side now. Pick up the cucumber.

3. Next, trade the cucumber for a basket of eggs.

4. Trade the eggs for a basket of rice.

5. Trade the rice for some cured meat.

6. Trade the meat for some bananas.

7. Trade the bananas for some pears.

8. Trade the pears for a watermelon.

9. Trade the watermelon for the red precious gemstone.

10. Turn around and go to the left lion (dragon?) statue. Put it back together again and then place the gemstone on its forehead. Take the clue.

12. Head to the pool and look at the symbols at the bottom of the water.

13. Copy the pattern onto the fountain and it will fill with water. 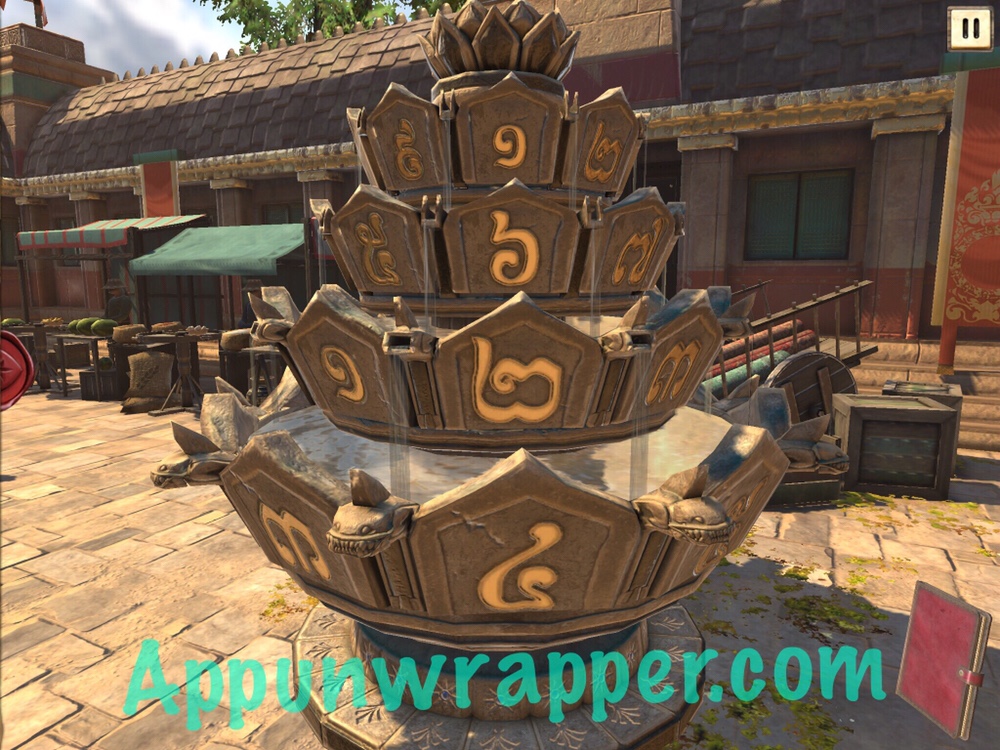 14. Go down the stairs and complete the level.

1. Pick up the three parchments.

2. Go over to the table. Pick up the candle. Place the three parchments down and use the candle to light the lamp.

3. Push the lamp in and make note of the symbols that appear on the parchment. There are six of them but you can only see them briefly. 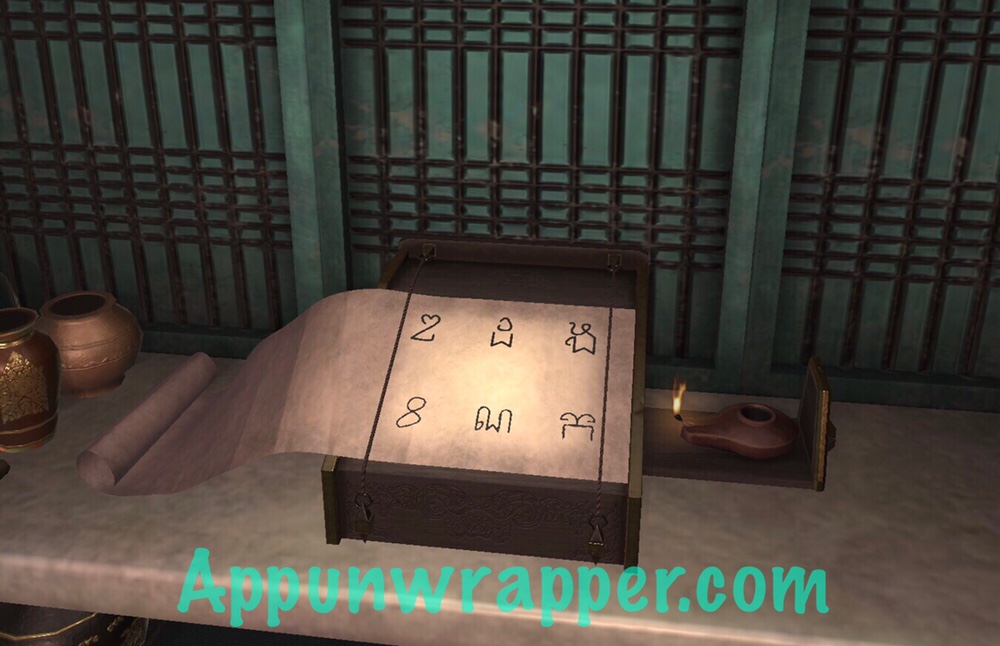 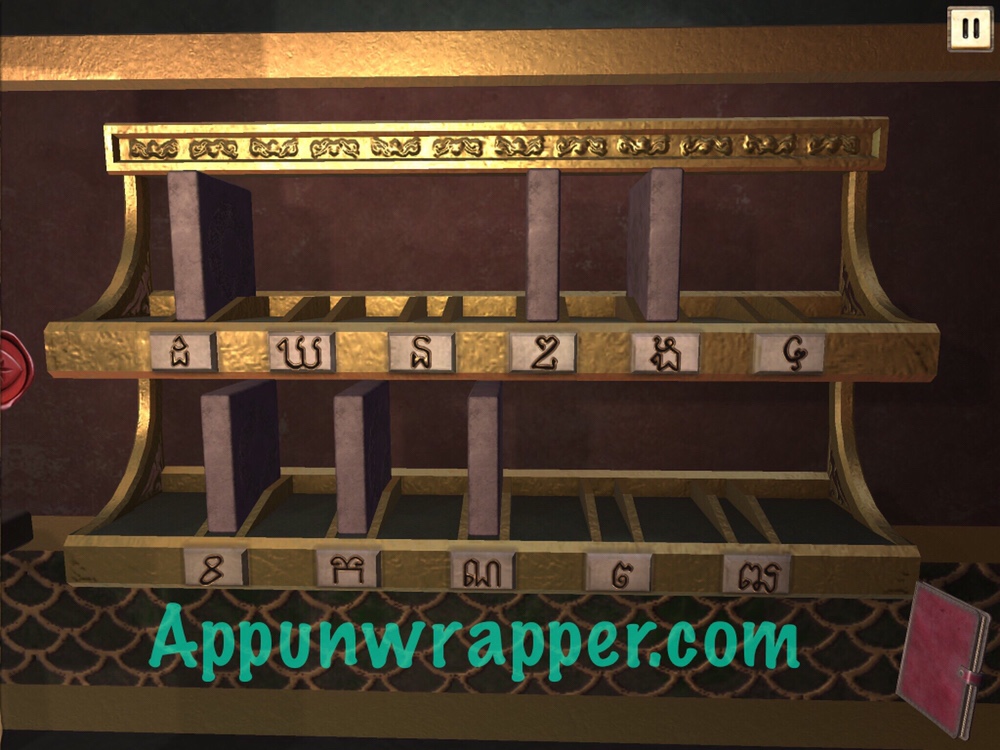 5. Head to the wall that says “God is in all of us.” Tap the colored items on each of the four figures in this order, then take the key. 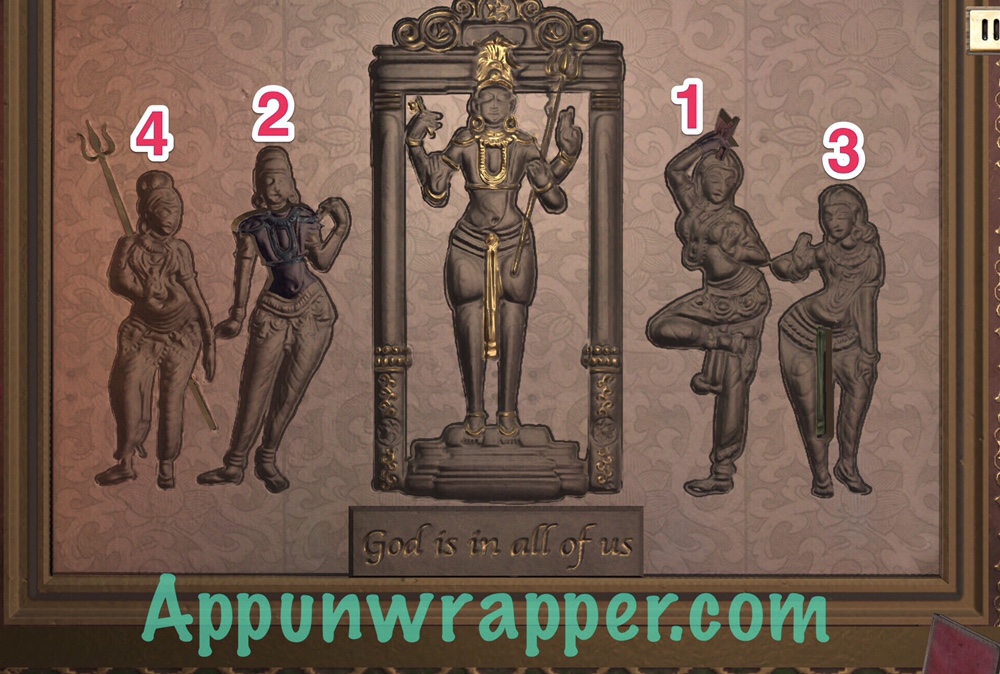 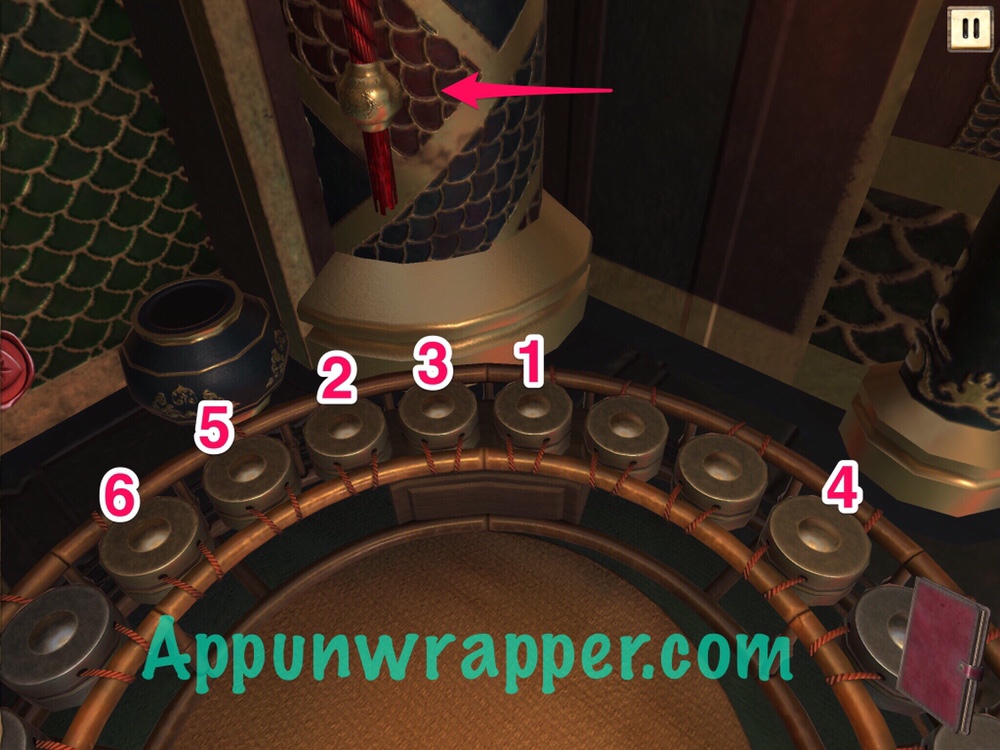 7. Take the iron mask. Now, go to the Vishnu image and light the candles in order from no moon to full moon, as so: 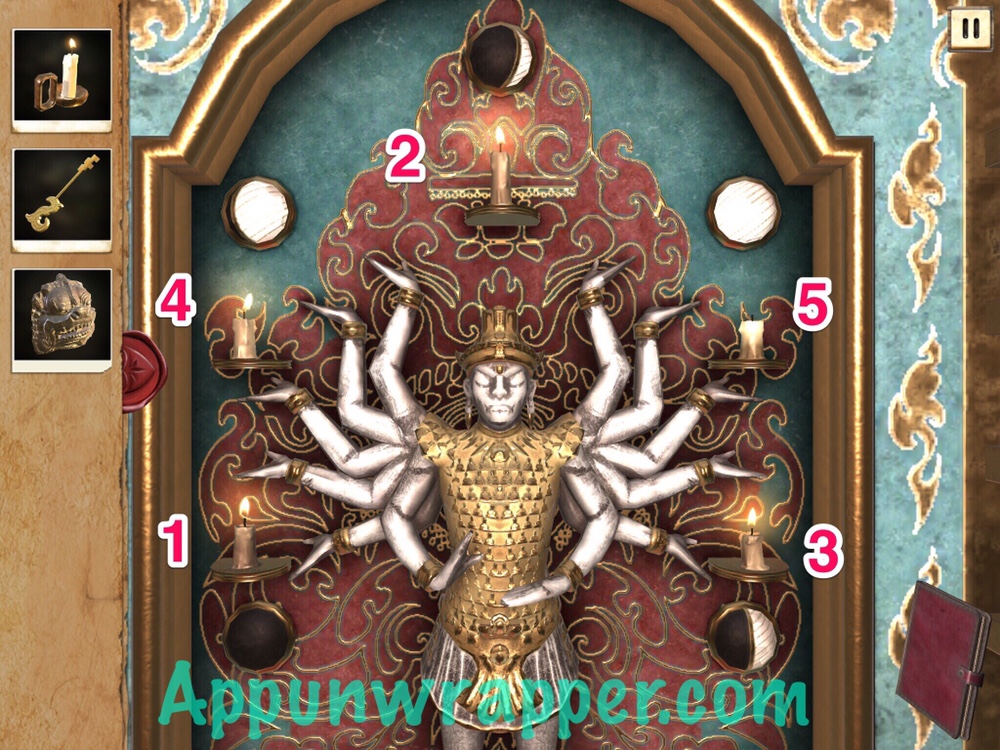 My game got corrupted here, so bear with me.