Full confession: I watched the original WarGames for the first time after finishing the new #WarGames series it inspired. The new Eko interactive series by Her Story‘s Sam Barlow uses some clips from the 1983 movie, as well as some other references to it, so I wanted to be in on the joke, so to speak. After watching it, I don’t think it’s necessary for the enjoyment of the series, but I would still recommend doing so. It’s a fun, campy movie on its own and knowing those references will keep you from feeling like an outsider looking in as you play #WarGames.

Now, the show is not technically a game or an app, so you may be wondering why I’m covering it here. But Her Story was one of the best experiences I’ve had with any medium, as it completely messed with my head, so Sam Barlow’s on my radar. And technically, there is an Eko app for iPhone that lets you stream the whole series — a total of six episodes — for free with an ad between each episode. Things can be hard to make out on such a small screen, though, especially since the action takes place over several small windows, never the full screen. I asked Sam Barlow if he thinks there will ever be an Eko app for Apple TV and other streaming devices, and he thinks that’s something we can definitely expect. But until then, I recommend using this link on either an iPad or PC to watch it in a browser. The ads are minimal, but you can also buy the ad-free version on Steam for $2.99 if that’s your jam. 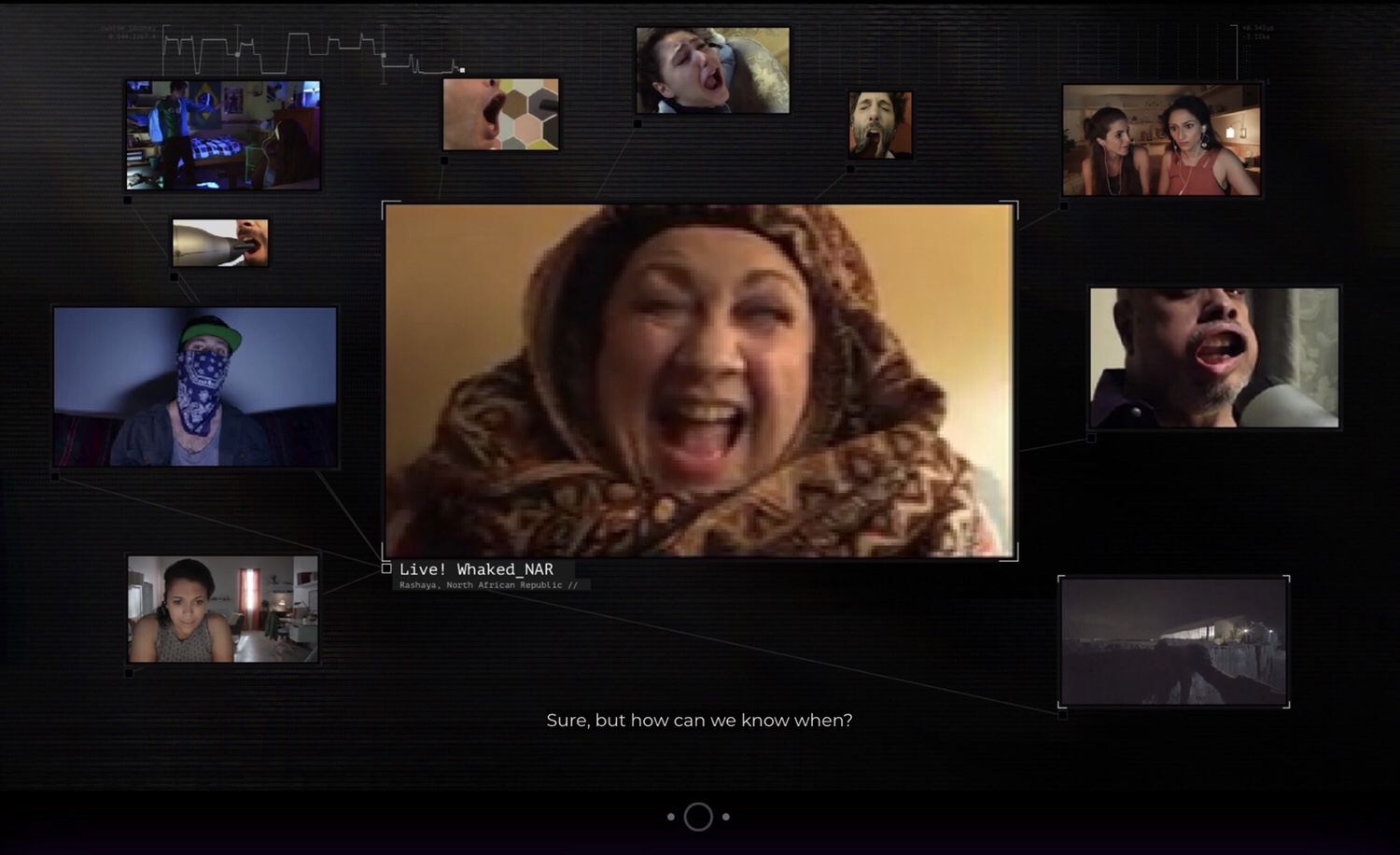 The main hook of the show is that it watches you watching it. While there’s sometimes only one window on the screen, usually there’s multiple. The action plays out as though you’re looking in on video chat from different phones and computers. There’s always one central view with the others floating around it. Usually, each character has their own window, but sometimes you’ll see other things like a website or security camera footage. Technically, you can watch the show like any other, by touching nothing and letting whatever window is in the center stay in the center. But if you want to interact with it and have an experience tailored specifically to your actions, you can tap (or click) on a specific window to pull it into the center. As you do so, a little graph at the top of the screen will keep track of what you do and shape the story around that. It’s subtle and would be pretty hard to crack exactly how to control things, so I don’t recommend trying.

#WarGames centers around a young woman named Kelly and her “hacktivist” friends. It starts off with them playing a prank on a celebrity, but they start to get more serious about things when they see Kelly’s decreased mother being called a traitor by the media. The term Γò¼├┤Γö£├ºΓö¼├║fake newsΓò¼├┤Γö£├ºΓö¼├æ is thankfully left out, but it does touch on how sound bites can be taken out of context to tell a different story than reality. Kelly and the gang set out on a mission to get the true story to the masses and they make it go viral using the hashtag #WarGames. Once they get a taste of this kind of activism, they decide they want to do more and make a bigger difference. I don’t want to spoil the rest of the story for you, so watch it to find out what happens. But I do want to talk more about the unique medium in which the story is told.

About five to ten minutes into the first episode, I restarted and was surprised that I could already notice small changes. For instance, the first time, Kelly told her friend Zane to cover his eyes while she got dressed. And then we see him doing so but also kind of peeking. When that didnΓò¼├┤Γö£├ºΓö£├╗t happen the second time, I started over again and tried to see if I could get that scene back. I couldnΓò¼├┤Γö£├ºΓö£├╗t, but I did notice some other details I didnΓò¼├┤Γö£├ºΓö£├╗t get before like some extra dialogue from their other friend, Torch, giving more backstory on her character. I restarted again and didnΓò¼├┤Γö£├ºΓö£├╗t get either of those little details, and it started messing with my head because I didn’t even realize I did anything drastically different. But I decided to continue and let the rest of it play out normally without trying to force anything. Still, in the back of my mind, I was still wondering how much I missed about side characters because of the way I chose to watch, since some of them seemed more fleshed out than others. But I didn’t want to keep playing the series over and over to try and see what I missed. That seems like the wrong way to experience it. So instead, I asked Sam Barlow about it and he said:

I think most of the characters exist to reflect back on Kelly and so you might see more of those characters, learn more of their backstories, and through doing that reveal different aspects to Kelly. The way the story revolves is driven very much by how your viewing tweaks Kelly. And often that reflects in who she talks to or how she talks to them.

So Kelly is always going to be the focus of the story, but how you watch will affect her friends to a degree, as well. I still don’t know if I’ll watch the whole series again to see what might change, but I did replay part of the last episode because thereΓò¼├┤Γö£├ºΓö£├╗s a more obvious Γò¼├┤Γö£├ºΓö¼├║choiceΓò¼├┤Γö£├ºΓö¼├æ there. I actually kind of regret doing so. I think if you start trying to hack the system and figure out how to get different footage, it can ruin the magic. The show quotes the famous line from the WarGames movie, “The only winning move is not to play.” And I think to some extent that holds true for the Eko technology. Not that you shouldn’t play (or watch) it at all, but that trying to turn it into a game and find the alternate paths could make for a less enjoyable experience and possibly break the immersion.

Speaking of the movie, I asked Sam why it was chosen as inspiration for the series, as it only plays a small part. If you’re curious, like I was, this is what he said:

The inception of the show was that it was based on the original movie so part of the process was figuring out what that would mean. I was adamant I didn’t want to do a straight sequel and extend someone else’s stories and characters, so the idea of setting it in a world where the movie exists seemed like an elegant solution. Kelly’s mashing up of pop culture felt like a way of acknowledging the way these movies frequently get rebooted, but she really cares about the heart of that movie and what it represents.

I also noticed while watching that the technology can be a little weird for those who multitask or just tend to rewind sometimes. Normally, if I get distracted while watching a movie or TV show at home and miss something, I can just rewind. You can do that here, too, but you may end up with something different than before. I asked Sam about this, whether he sees it as an unfortunate side effect or a lovable quirk and this is what he said:

Quirk! Really the big experiment here is acknowledging that all shows end up being subjective — but here we make that literal. You all get a genuinely unique version.╬ô├╢┬╝Γö£├¡ We spent a lot of time talking about the philosophical implications of restarting or rewinding episodes — it’s a mindtrip.

I agree — it is a mind trip! It’s still messing with my head, as I wonder what I didn’t see in my version, but I’m also not someone who’s going to try and figure that out. I’m curious to see audience reaction to it, whether most people will be satisfied with watching it once and accept that as their one and only experience with the show. Or will a lot of people watch it multiple times? I also didn’t have as much of a connection with all the characters as I wanted to, but it is geared more towards a younger audience. Perhaps if I had been drawn to the characters and story the way I was with Her Story, I might have wanted to try and see every bit of footage like I did with the game.

And speaking of Her Story, I asked what he learned from working on #WarGames that he might apply to the spiritual successor of Her Story, Telling Lies. This what he had to say:

It was great to work with an experienced film crew and push the limits of how much we captured and the whole idea of simultaneously capturing different locations. It definitely encouraged me to go further with Telling Lies in terms of the textures of filmed performance, how that works if it’s real-time.

I’m excited to see how that will play out with Telling Lies, as both Her Story and #WarGames used very unconventional methods to tell their tales and make the player/viewer feel like more than just bystanders. Even if the Eko technology is subtle and you don’t really know how you’re shaping the story, I’m eager to see where it goes. And about a potential second season, this is what Sam had to say:

Yeah, if Season 1 is a hit, we definitely know where the story is going and have some ideas for further mixing up the formula! I’m super interested in what the future of TV looks like, and whether it looks like WarGames or something completely╬ô├╢┬╝Γö£├¡different, it’s definitely an area I want to play with further!

Now, like I said, I don’t think #WarGames will mess with your head the way Her Story did, and the characters might not be quite as compelling. But I still think it’s very much worth watching. Even if you’re not the target audience, it’s pretty trippy to see it in action. It’s also free, so at the very least you should give it a try. There are some meaningful messages told through a diverse cast, and there’s just enough cheesiness that you might actually laugh out loud a few times. In fact, my favorite scene of the series is shown in the screenshot above, and I love that you can’t even tell what’s going on there so it’s not a spoiler.

I don’t know if interactive television is the future of entertainment, but I’m certainly willing to go along for the ride and see where it takes us. If you’d like to experience Sam Barlow’s first take on the medium, click this link and let #WarGames watch you watching it.