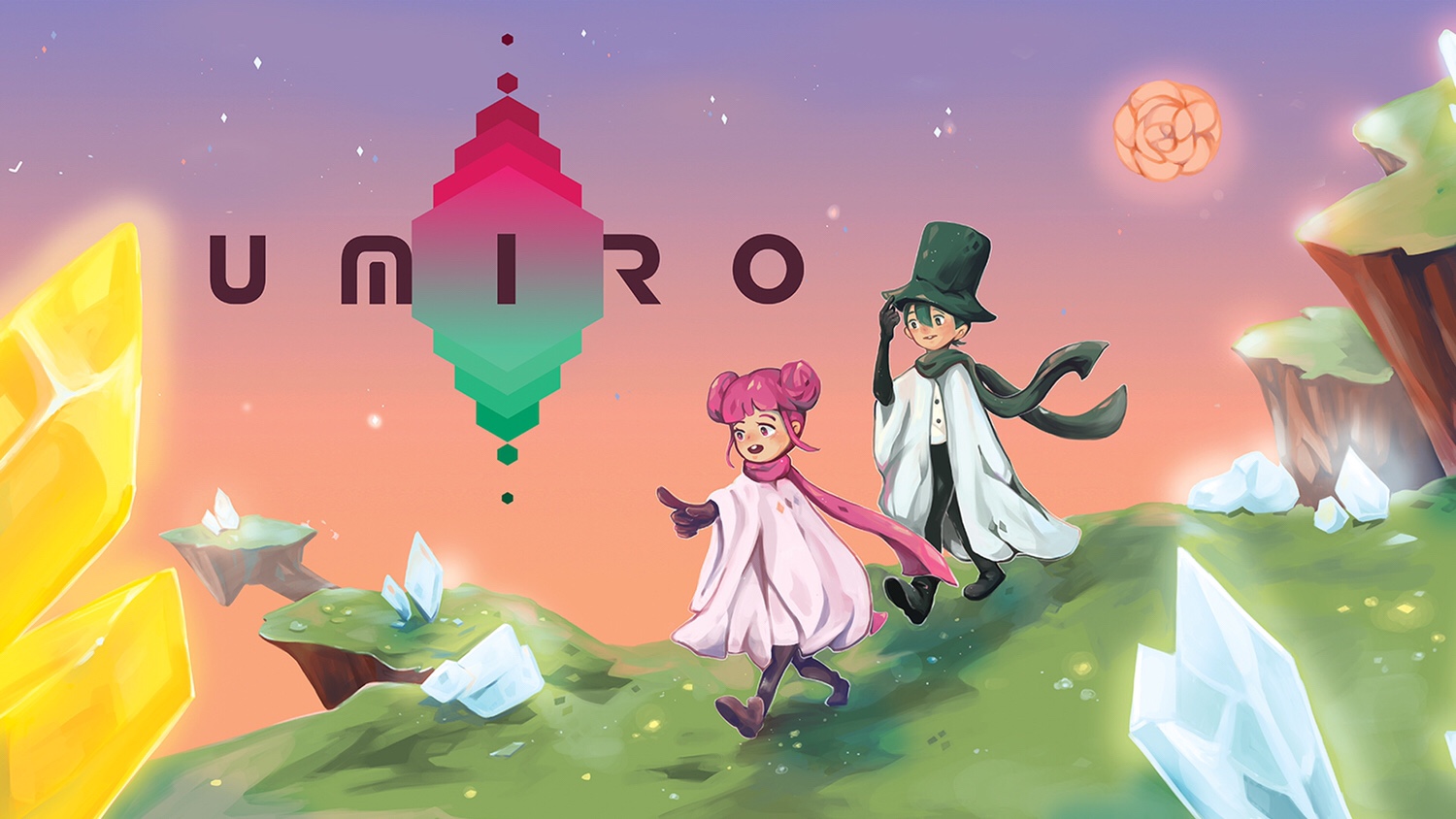 From the moment I saw some GIFs and screenshots of Diceroll Studios’ Umiro, I knew I needed to play it. I didn’t know much about the gameplay itself other than that it’s a puzzle game with unique mechanics. But, besides the artwork, I liked that everything appeared to take place on one screen in portrait mode, and it looked like the perfect one-handed iPhone game. My actual experience with it has had mixed results, though.

In Umiro, you start off playing as a young boy named Huey. In each level, you need to draw a path — literally — from him to a green crystal. When you’re happy with your path, you press PLAY and watch him follow it to the crystal. If nothing gets in his way, he’ll make it there safely and you’ll complete the level. Sounds simple enough, right? But soon you’ll start encountering black orbs that move in a pattern around the board. This is where timing starts to matter. If Huey hits one of these enemies, he dies and you have to try again. The path you drew remains intact, though, so if it was just a matter of pressing PLAY at the wrong time, you can wait for a better opportunity to do so. Or, if you realize the path you drew is all wrong, you can erase it and start over. You can also erase only part of the path if you liked how it started but not how it ended.

Some levels only have one green crystal for Huey to get to. But if there’s two, they’re called checkpoints and you have to draw a path to each one individually. The level saves after each checkpoint, so if you somehow worked yourself into a dead end, you have no choice but to start the level over. That’s not too big a deal, though, as it’s quick to restart. In each level, there’s also a bonus yellow crystal you can try and pick up. It’s optional, meaning you don’t need to grab it in order to progress to the next level. But it adds some extra challenge and can make an otherwise easy puzzle more satisfying. Over the forty-odd levels in the game, I picked up all but three of them. The last chapter gets pretty intense, and I was happy sometimes to just get through a level, even if I had to sacrifice the bonus crystal. 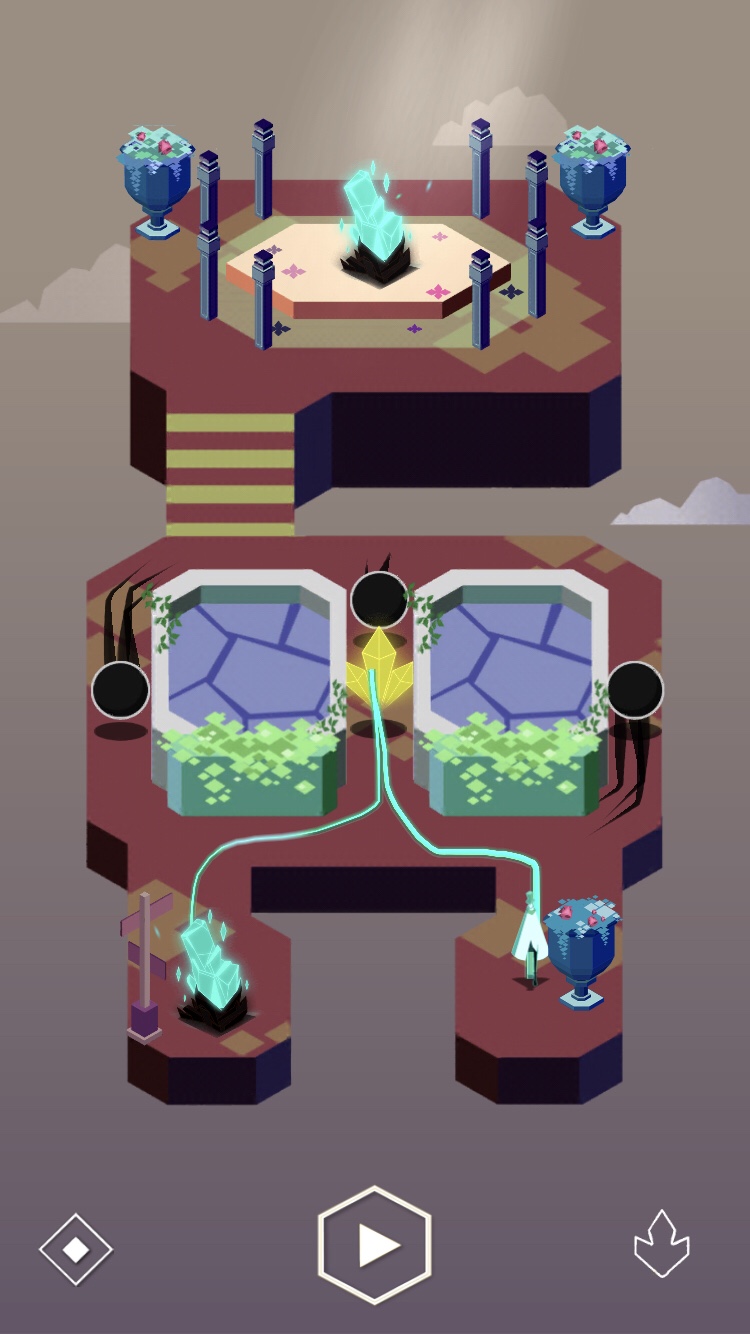 Just a few levels in, Huey will meet Satura, a girl he knows but who can’t remember him. He starts sounding a little stalker-y and the story is a bit confusing, so forgive me if I don’t provide more details about it. But once Satura joins him, you’ll have to draw paths for both characters, with Satura’s goal being the red crystals. Once both paths are drawn, you press PLAY and they’ll both follow their individual lines at the same time. If one crashes into an orb or other obstacle, they both fail. You then have to either adjust their paths or press PLAY at the right moment that will allow them to both get to their crystals safely. I learned at one point that I could draw little circles in place to slow one of them down if I need them to arrive somewhere a bit later. I don’t know if this is intentional, as sometimes it felt like cheating, but the game doesn’t punish you for it, so I used it to my advantage. 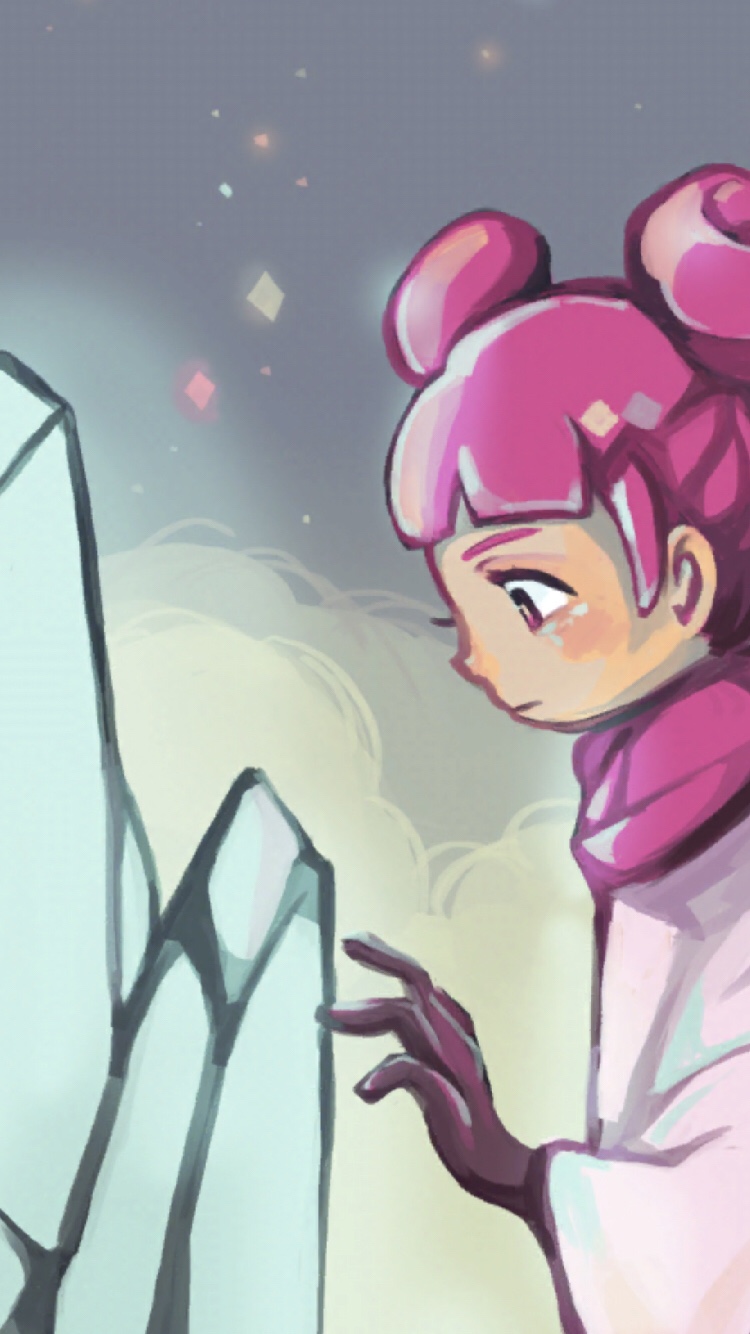 As you progress, more mechanics are added to mix things up. For instance, there’s colored mist that kills Huey or Satura if they bump into it. To avoid this problem, there are buttons they can run over that turn the mist on or off. The catch is that each button can only work once, so you need to carefully plan out when to use them. Like I said earlier, if you trap yourself in an unwinnable state when you get to the first checkpoint, you’ll have no choice but to start over. When there are several mist spots, it’s possible to trap a character behind one with no way out. For the most part, these puzzles with the mist were some of my favorites, as they required some careful planning. This is where the game felt most like a puzzler, as it can take some time to figure out which button to press when and with which character. But the orbs sometimes ruined the fun. This is because a level can involve some backtracking to get to all the crystals, and the orbs can be overwhelming in those situations for several reasons. First, there’s no way test and see if your path works at all if you fail to avoid the orbs. I got frustrated because I wanted to see if I had the right idea of when to press each button, but I couldn’t tell with the orbs killing me. Second, it can be hard to tell when you’re playing two characters whether mist got one or an orb got the other. When one hits an obstacle, both fall at the same time and the screen turns black. So if you were watching one character and the other one died, you don’t get a chance to see what killed them so you can adjust your strategy. And third, the orbs continue moving on their own as you’re drawing the path. Even though you’ll see a ghost of the first character move along their path as you draw the second character’s path, you won’t really be able to see how they interact with the orbs until you press PLAY. And even then, it’s often hard to tell if you just had the timing wrong or the path itself needs fixing. I’m not sure how this can be improved, but some later levels nearly led to a ragequit. I sometimes wished I could just play the more complex mist levels without the orbs, and would have even welcomed more elaborate puzzles as long as I didn’t have to worry about those enemies. 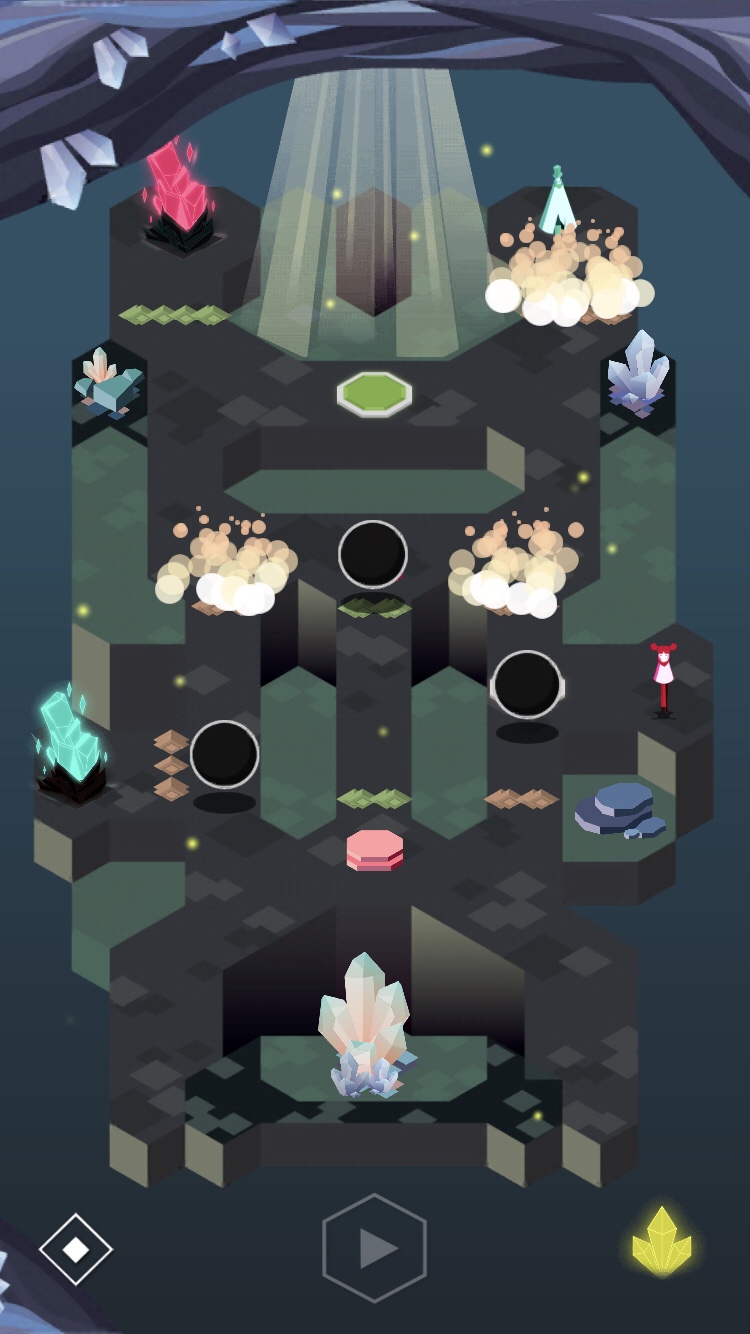 Later on, you’ll encounter shields that allow a character to go through a single orb without getting hurt. Sometimes, they seemed overly generous, letting me pass through more than one if they were close enough together, but you won’t hear me complaining about that. The bigger issue for me was the freezing. If a character passes through a snowflake, all the orbs get momentarily frozen. This is great if you time it right and they’re frozen out of the way. But more often than not, I ended up with them frozen blocking my path. Those were my least favorite levels, because I sometimes found it really difficult to plan around them. Thankfully, you won’t encounter them too many times, and not until the last chapter. The environments do look lovely covered in ice, though. 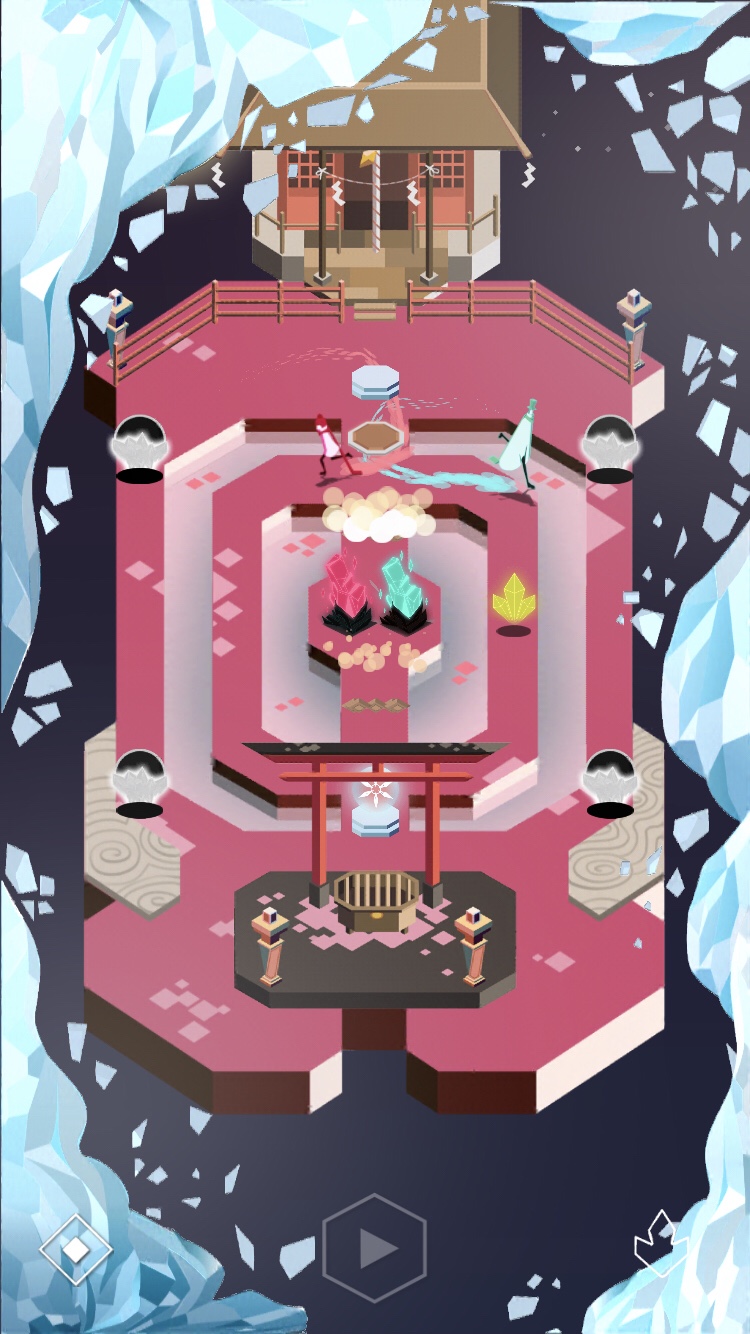 I did stick with it to the end — though I gave up on the optional bonus levels — and there is a lot to like, but I still have a few complaints. There are two parts to to each puzzle — the drawing and then pressing PLAY at the right moment for the path to work out. Because the orbs keep moving in real time while you’re drawing, it would be reasonable to expect that if you watch the pattern carefully enough, you should be able to draw around the orbs reliably. And often, this is true. But at one point, I realized that the orbs don’t always stay in step with each other, making it hard to predict where they’ll be. For instance, say an orb starts at one point below and ends somewhere further up. And then there’s another orb that moves left to right. You start watching them and draw a path that would work around them. But as they continue moving, the two orbs stay on their individual paths, but become out of sync with each other. So you may think you know the pattern, but it changed by the time you pressed PLAY. When you fail, they restart their movements from the beginning. Since my paths stay in place, I noticed sometimes that if I pressed PLAY right when the level restarted, I’d be able to pass. But if I watched the orbs until one of them was in the same spot, the other one would be out of sync and I’d fail. Since you’re drawing while the orbs are moving, it’s hard to account for those small changes that might happen if you just wait longer. While it’s not an issue with every level, it did make me wonder how many I passed more through luck than careful planning. There was another level where I used it to my advantage, as I noticed that if I wait for one orb to hit a certain point on its second round, then the other orb would be where I need it when I need it. It felt a little like cheating. And how many times did that happen by accident? Did I actually perfect the path? Or did I just happen to press play at a lucky moment because the orbs got out of sync? I think the core design would be stronger if you could watch a pattern, memorize it, and expect it to stay the same over time. 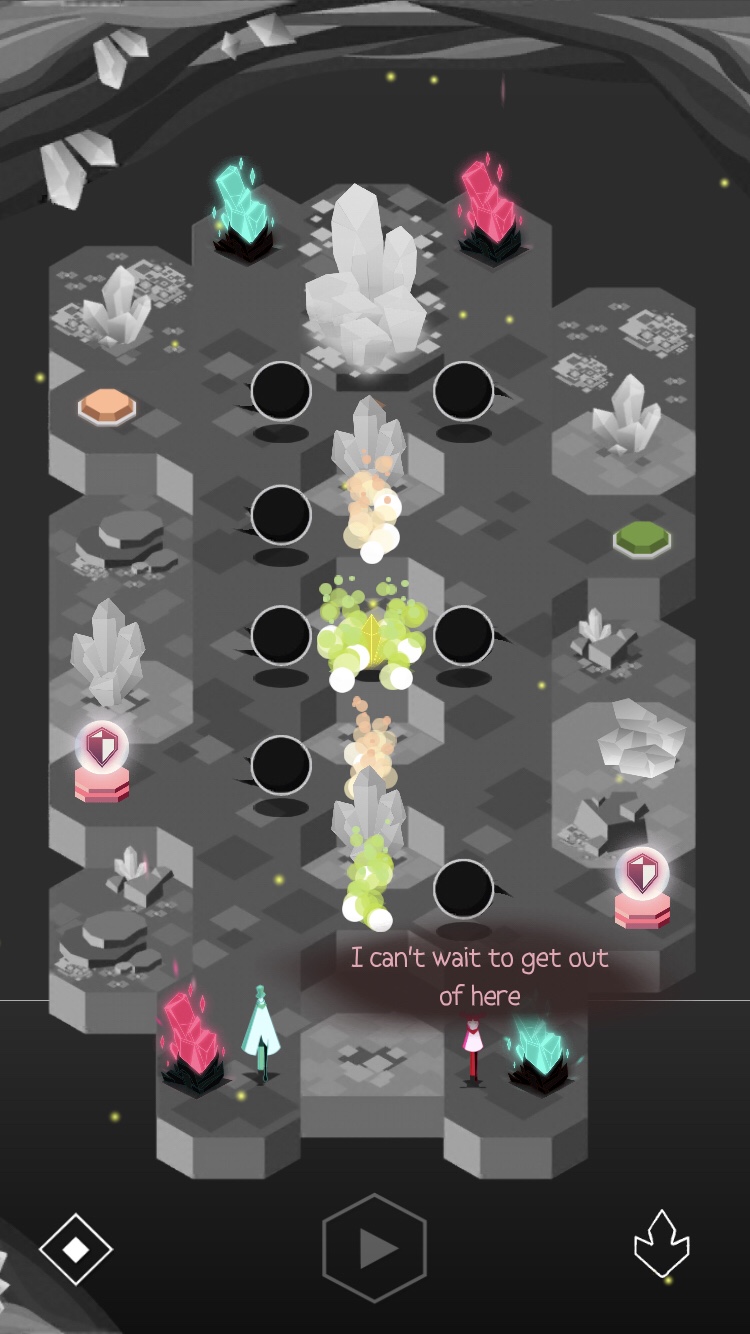 Another small complaint that could easily be fixed is the slow transitions between levels and unskippable dialogue even on revisiting an older puzzle. The music is — rightfully so — relaxing, and I think the pace is also meant to be, but it can get to be a bit much, especially if you’re just trying to go back and collect a yellow crystal you missed. On top of that, I pushed my way through to the final level and was excited that I made it. But it ended up being a series of individual puzzles with no break in between. You can’t quit in the middle, or you’ll have to restart from the first one. Once I realized this, I made sure to do it all in one sitting. But I failed to get the yellow crystal on the final puzzle and I really don’t feel like replaying all those leading up to it again just for another chance at it. To me, this is one of the most infuriating things a game could do, and it was so unnecessary. Thankfully, it was at the end of the game, but it left a sour taste in my mouth when I should have been excited about completing the game.

At the end of the day, I did enjoy my time with Umiro, despite some frustrations. I love the visuals and sound design, and there are some really interesting mechanics that create genuinely challenging puzzles. I am thankful that the game — aside from the few bonus levels — isn’t skill-based, in that you don’t need to worry so much about fast reflexes. Timing matters, but it’s more about planning things out, not using a joystick to run between enemies. The core concept is unique and one designed around touchscreens, which is always a plus. I would love to see the idea perfected or expanded upon, because there are a lot of interesting ideas here. If you’re easily frustrated, you may want to skip it, but if you’re up to the challenge, give it a try. There’s no iCloud sync, unfortunately, and I think it is easier to play on an iPad where your fingers won’t get in the way as much. Perhaps even with an Apple Pencil? But I played through the game on my iPhone, so it’s definitely doable. If you’re willing to help Huey and Satura out, you can grab the game here.

And if you need help with any puzzles, I’ve started a walkthrough guide here.