I love when I see a game in the App Store that I never heard of before, but it looks really interesting and is reasonably priced, so I give it a shot and it turns out to be one of the best experiences I’ve had. Such is the case with IZHARD’s OVIVO, one of the few platformers I’ve played through to the end. The black-and-white minimalistic artwork was the main appeal for me, but I was also intrigued by the unique gameplay mechanic. That said, the trailer made it look difficult, so I fully expected to ragequit. It’s a testament to the strength and user-friendliness of its design that I only ever took breaks when frustrated, but refused to quit. 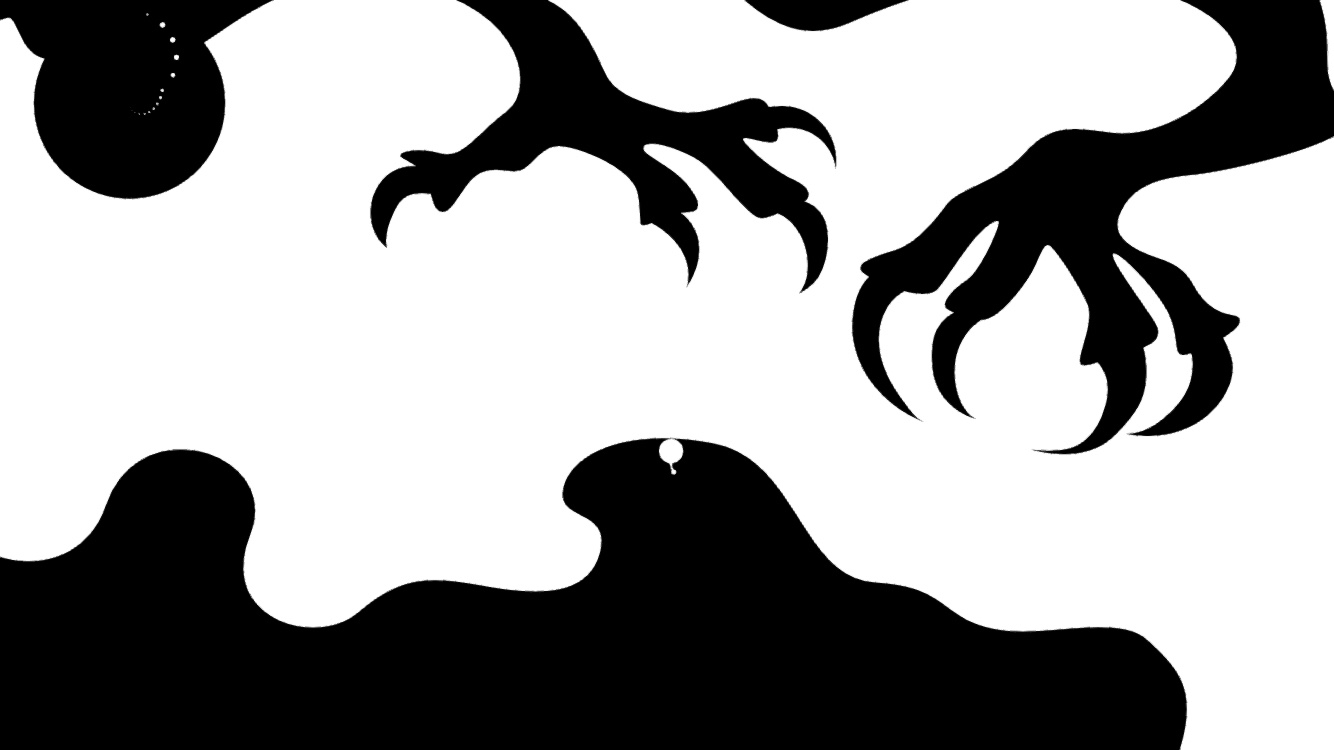 What makes OVIVO so special is its main mechanic. Everything is black and white. There are no gray areas here. You play as a little blob called OVO, and with the tap of your right thumb, you can swap his color between the two. When he’s black, he can move through white areas, and when he’s white he can move through black areas. In white, gravity pulls downward, while in black gravity pulls upward. Even though this is very much a platformer, there’s no jump button. Instead, you use either an invisible joystick, arrow buttons, or tilt to move OVO left and right. He can’t move up a hill, though. As I said, a simple tap on the right side of the screen switches his color and then he can go down the slope that was just an upward hill a moment ago. And that’s it. If you watch a video and it looks like he’s jumping, it’s actually gravity pulling him to the line where the two colors meet, and the player changes his color at just the right moment to keep the momentum going. Do this a number of times in a row and it looks like he’s jumping platforms. It’s not easy to pull off, but when you get into a rhythm like that, it’s super satisfying.

At first, you can move slowly and get used to things without having to worry about pulling off any fancy tricks. But when the moment comes where it’s necessary, you’ll know. What’s really nice is that the game forces you to learn how to do it without saying anything. You simply reach a point where going slowly won’t work to get you to the next platform and you need to figure out how to get up higher. Once you get used to that, the game will demand more of you. But the level design changes gradually enough that a task rarely feels insurmountable. Everything you need to know can be learned by messing around with the environment and then it’s just a matter of mastering the technique. Along the way, you’ll discover that falling into a bottomless pit of one color will kill you. So will touching spikes. Later, you’ll have to navigate gingerly around spiked wheels and learn how to hop from sparkly areas that push you upwards. There are other neat mechanics that are fun to discover on your own, so I rather not spoil it here.

There were a few frustrating moments that demanded speed and near-perfect timing and skill. But in those situations, I usually took a break after a number of failures and came back when I was calmer. That always worked and I managed to make it through the whole game. I am missing a few dots and symbols, but I’m going to try and go back for them. One of the reasons I found the game so approachable and enjoyable even when it was difficult for me, is that it’s broken up into bite-sized levels that feel perfect for mobile. On top of that, checkpoints are plentiful. The game doesn’t punish you for failure by making you tediously replay sections you already passed. The only time it feels less forgiving is if there’s a specific area in which it’s asking you to get from point A to point B without failing. For instance, you might be climbing upwards and fall into spikes and have to start back at the bottom of that sequence. Each of these areas made sense, though, and they were never so big that I wanted to quit. And failure never felt cheap, as the result of poor level design or janky controls. It was always just a matter of perfecting my skills. 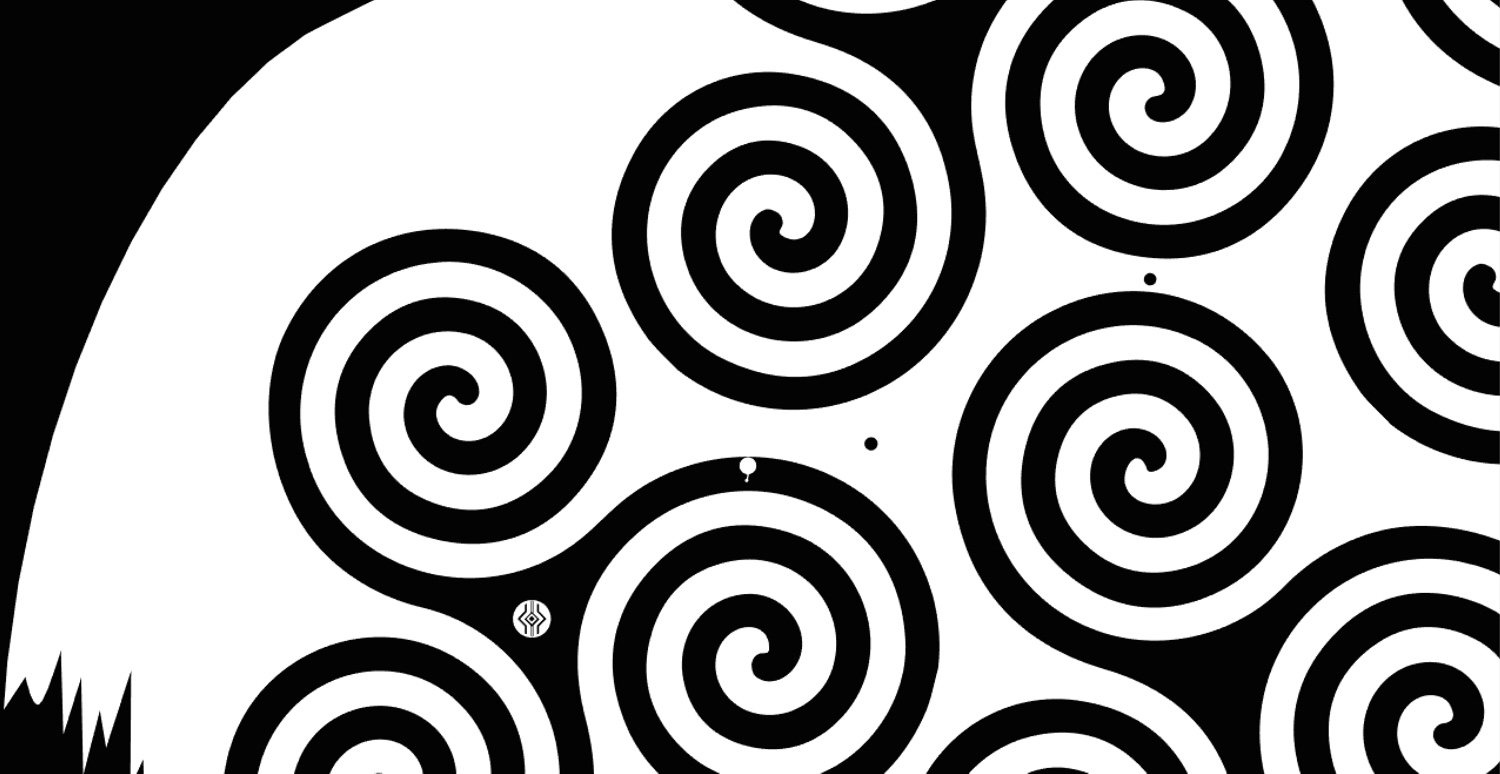 Besides making your way to the exit, there’s a a number of dots to pick up in each level, as well as a single symbol that’s usually harder to access. On most levels I found everything, but there were a few where I missed a couple of dots or symbols. From what I can tell, you’re not penalized for missing any orbs or collectibles. You simply miss out on achievements and the satisfaction of getting them all. But I fully intend to go back and try to grab what I missed. Thankfully, the game doesn’t force you to replay an entire level and collect everything at once. You can go back, grab the items you missed and quit without making your way to the exit again. Like I said, it’s very user-friendly and doesn’t waste your time. For those who want a more hardcore experience, you can strive for the achievement that asks you to complete the game without a single death. It might have also been nice to be able to replay a single level with all the dots and symbols intact without having to clear all progress, so I could go back and perfect my skills on older levels. But given a choice between the two, I prefer the current design. 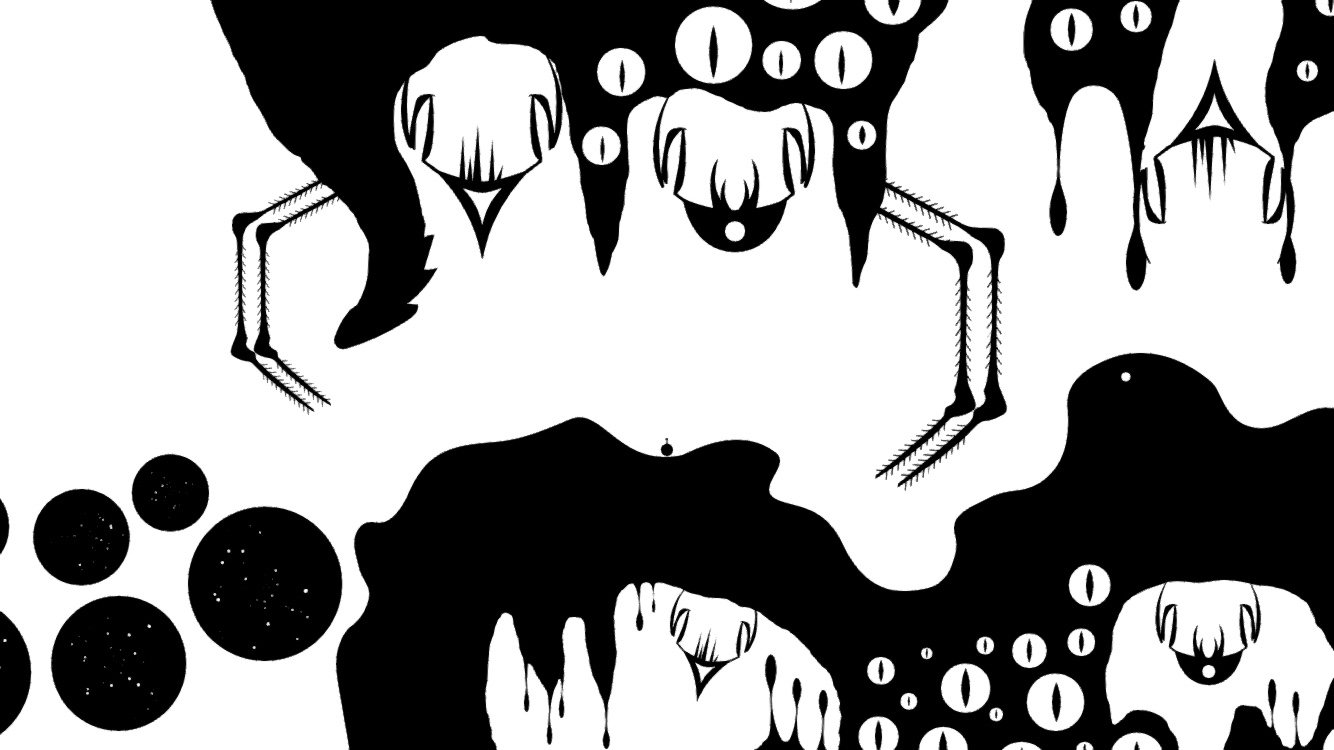 Now, as fun as the game is, half the experience is its fantastic art direction. Sometimes, you’re just passing over and through rolling hills or hopping from floating triangle to floating triangle. Other times, you’ll notice more interesting and complex designs like bird talons, flowers, or the two hands from Michelangelo’s The Creation of Adam. There are sinister eyeballs, spirals, and even creatures that chase you. But most of the time you’re playing, everything’s zoomed in and you only see a small portion of the map. Then, when you complete a chapter, the game shows you the whole map you traveled through. You can zoom in on it and see the little details and pick out your favorite sections. But this map always forms part of a really cool piece of artwork. There’s something really special about discovering that those abstract forms you traveled through weren’t designed only for the mechanics they provided, but as part of a larger picture. 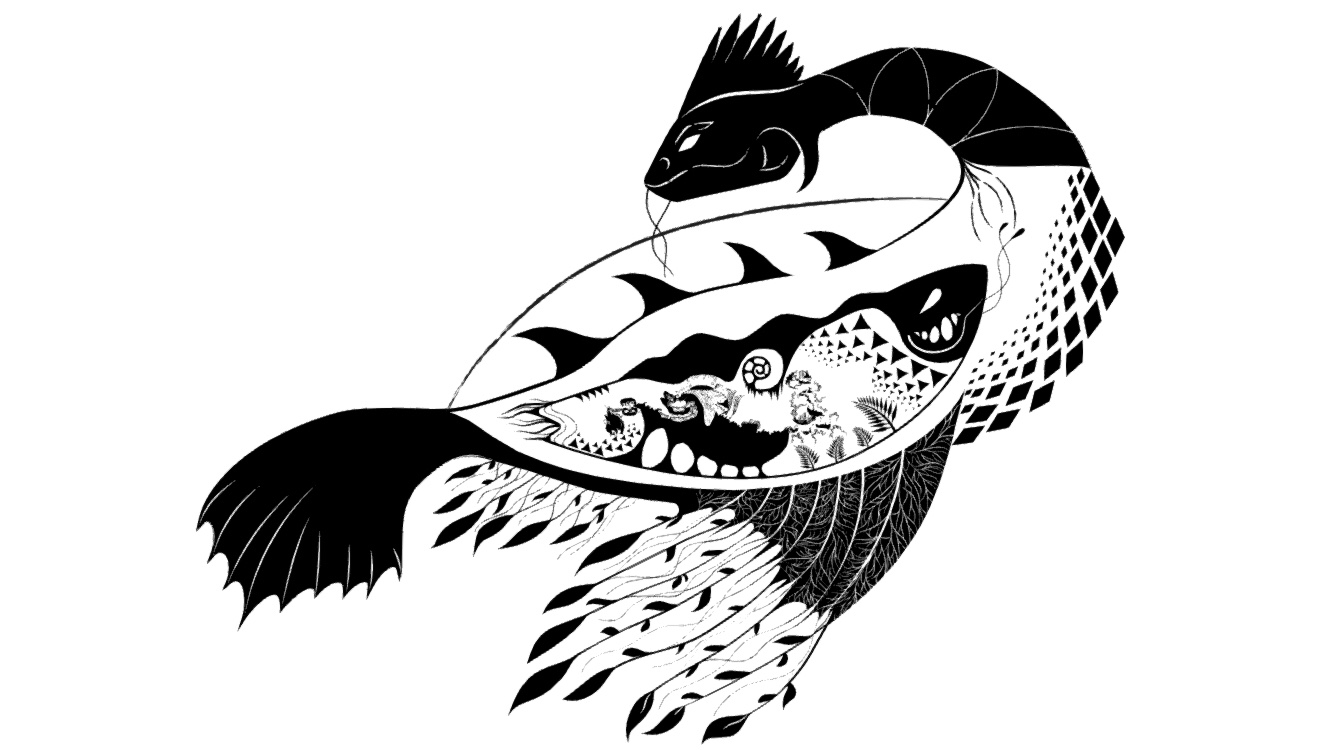 The game isn’t a terribly long one, as there’s just under thirty shortish levels. But for me it was just the right length so that it never overstayed its welcome. Each level felt unique and offered something new, instead of just rehashing the same things over and over. While I am sad that it’s over, this is one of those instances where it’s quality over quantity. I also plan to go back to the later levels and try to grab all the collectibles I missed, as well as replay earlier levels just for fun. It reminds me of Mushroom 11, in that its core mechanic is simply fun to mess around with, but on top of it there’s smart puzzle design and satisfying tricks to pull off. Both games have their frustrating moments, but the generous checkpoints keep them from becoming tedious. And they both have tight controls feel designed for touchscreens even though they originated on other platforms. 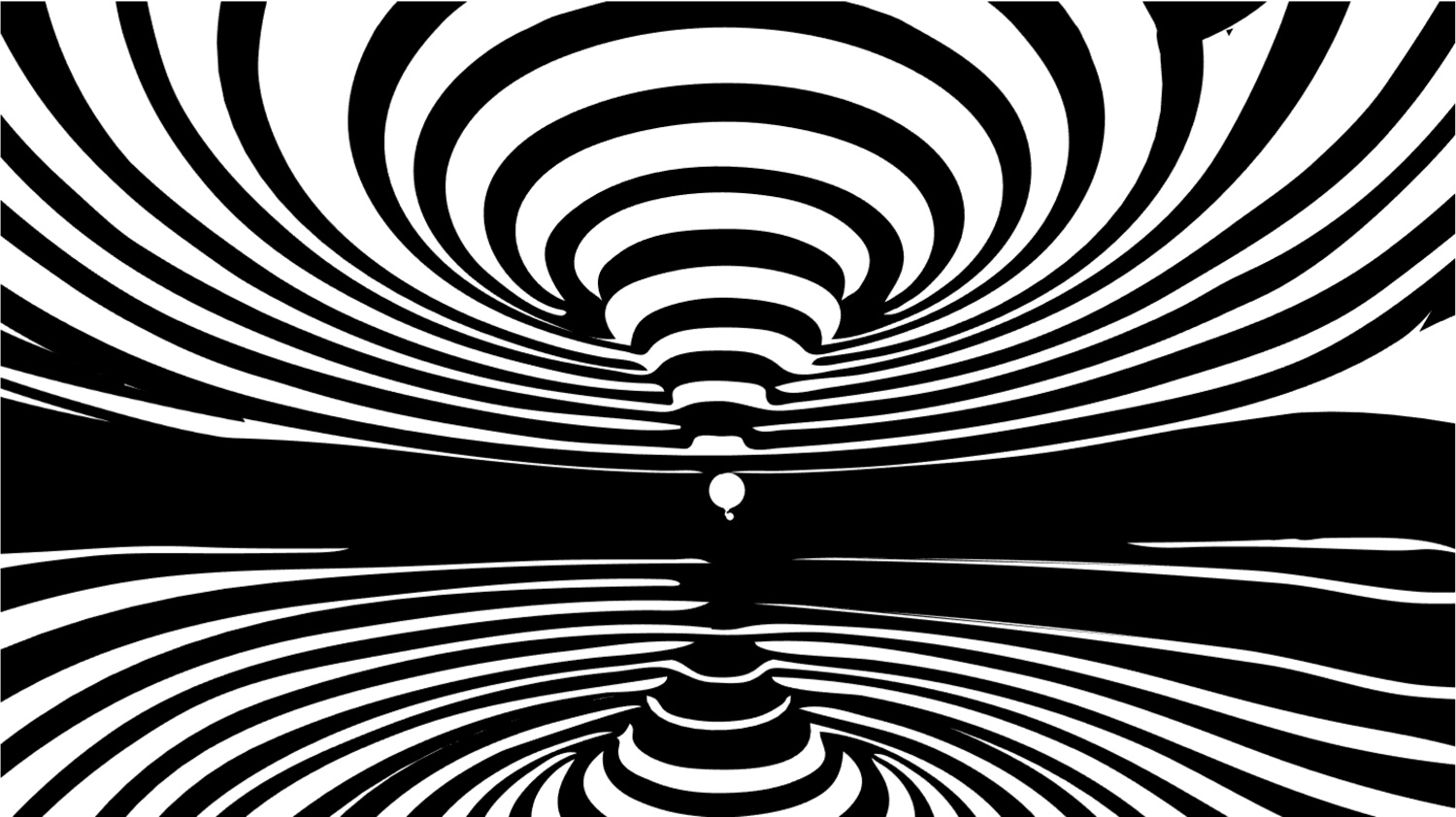 There are a few other things I appreciated about the game that I want to mention. First off, the flexibility in controls options for all types of players. I hate tilt and I also hate on-screen buttons, but the invisible joystick worked perfectly for me. And if you don’t use the buttons, you’ll have a clean interface free of any on-screen clutter. Even the pause menu is hidden, so you have to tap the upper left corner to see it. The result is complete immersion in this gorgeous world. Another nice surprise was that the final level was an accumulation of all the earlier mechanics, but a little easier so it feels almost like a ride. So often, the final level of a game is the hardest, but this was more like a relaxing reward for getting through the rest of it. I also love the level select screen, as it’s an endless spiral. Each and every one of these little details shows how much care and attention went into this game. The only things lacking for me was iCloud sync and the ability to play with the Home button on the left. The developer did say they want to add those features in an update, though. Meanwhile, I suggest playing around with both devices if you have more than one, and then sticking with the one thay feels more comfortable. For me, it was my iPhone, because I felt I had better control with it. 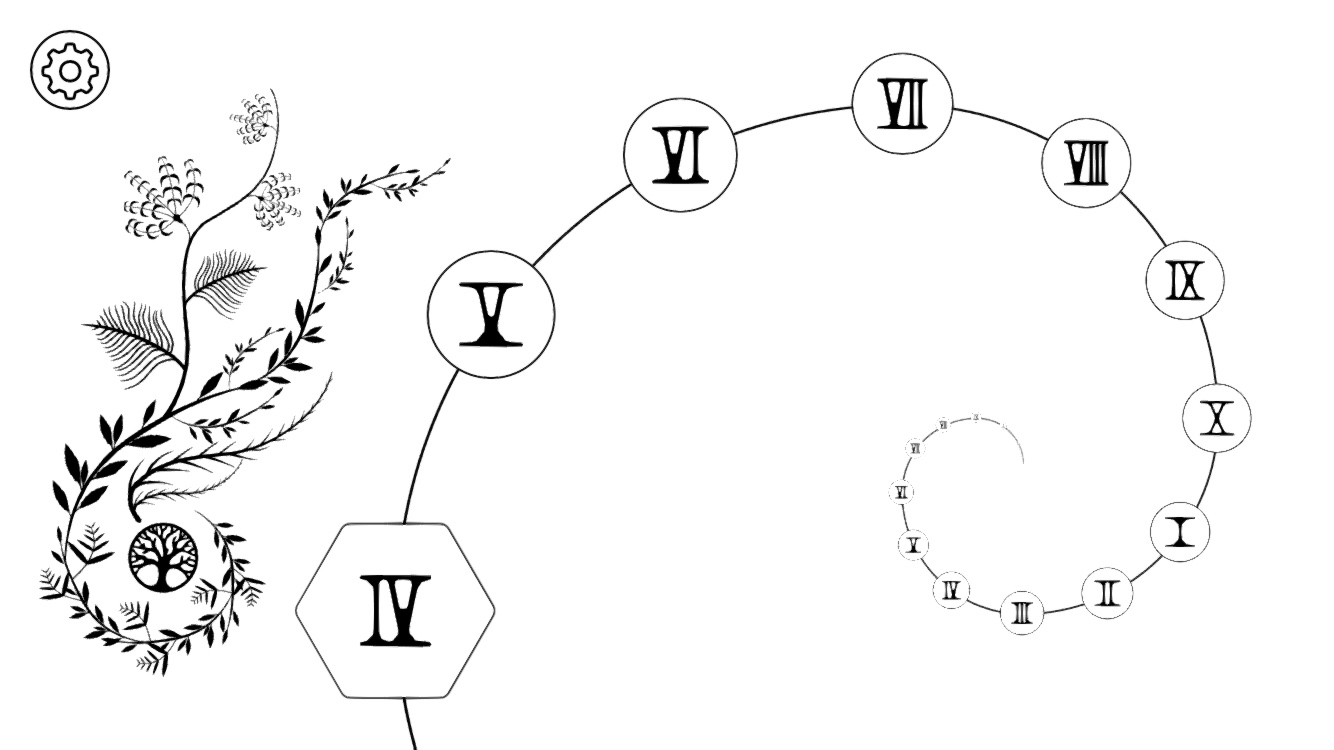 OVIVO is one of those truly special games that comes around so rarely, one that everyone should play unless you’re against any sort of skill-based games and are likely to give up after failure rather than persist. It combines unique mechanics with truly inspired artwork that go hand in hand, together forming a must-have experience. It’s games like this that make me realize just how lucky we iOS gamers are, that we can get such a masterpiece in our pockets for only $1.99. If you have any interest in this game at all, you absolutely must play it. So what are you waiting for? Download OVIVO and start playing with gravity.