You’d be hard-pressed to find a game that embraces its theme so completely as Spotlightor’s Candleman. You play as the titular character, a candle on two legs. He’s on a search for meaning and discovers a lighthouse, then decides he wants to shine as bright as that lighthouse. He travels there through places like a dusty old library piled with books, a rocking ship with deadly flames throughout, and a forest bursting with colorful flowers. But most of the areas he’ll traverse aren’t very well-lit. Thankfully, he’s a candle. But there’s a catch. He only has enough wax to burn for a total of ten seconds per life. Early on, it’s fairly easy to conserve light, but later on the flame is used to activate objects in his environment, so it gets trickier. But from beginning to end, you’re constantly aware that you are a candle and your wax is precious.

I wrote up some early impressions here, but I’ll recap some of it for you. On iOS, the controls are, thankfully, invisible instead of on-screen buttons. The left side of the screen is the joystick and you swipe on the right side of the screen to jump. You press into the right side of the screen to light your flame. For the most part, the controls work fine. But I’d get the occasional lag, despite being on the latest iPad Pro, which would sometimes mess me up. The camera also got in the way sometimes, as it would cause something to block my view and then I’d mess up. That was less problematic than the controls, though. For instance, sometimes I would accidentally ignite my flame when I was jumping. It can be difficult to separate the two actions when they’re controlled with the same finger. If you press the screen too hard while jumping — very easy to do when you’re stressed over a difficult section — you’ll light up. This is problematic enough when it wastes precious wax. But there’s a section where your light makes spiky flowers bloom. At one point, you have to jump between two of them, which are perfectly safe in the dark, as they shrink down. But when I jumped between them, I accidentally lit my flame and they killed me.

In an earlier section that’s mostly walking in a 2D plane along flaming pipes, I kept getting stuck on things because when I moved right, I also moved a bit back. Sometimes, I even fell off the pipes to my death because I thought I was only moving right, but couldn’t see the depth of the pipe and that I was near the edge. These deaths felt cheap and I almost gave up. Perhaps it would have made the game easier, but I would have appreciated some sort of safety net to make up for the imprecise touch controls. There’s a reason that games like INSIDE or OVIVO don’t feel unfair even when they’re frustrating. A platformer in which you can only move left or right is simply going to feel better on a touchscreen than a 3D platformer that allows you to move in every direction. I wouldn’t have minded if the joystick was a little smarter, like Linelight‘s, where it doesn’t require you to line your light up perfectly with the path you want to take. Instead, it lets you move in that direction when you’re near the fork in the road and it sort of reads your mind. The game is still challenging, but not because you’re fighting the controls. Candleman could perhaps have done something similar, at least on the tightrope-walking parts.

There was also a section very late into the game, on the second-to-last level. I knew what I needed to do, but I kept running out of light doing so. It’s because you have to time things right while using your very limited light to make flowers open up so they can be used as platforms. If you run out of light, you die and have to start from the last checkpoint. After a few failed attempts, I gave up and only came back to it a few days later when I had forgiven the game for its misdeeds. I was then able to pull it off, but it was so frustrating that I can’t see ever going back to that level, even to get the last candle I missed. The game does make things a bit easier, though, by giving you ten lives to burn through before you have to start a level over completely. Some might complain this makes it too easy and undercuts the whole ten seconds of light thing, but I appreciated it when I was struggling with a difficult section. I also found it generous that if you die, any candles you lit stay lit, even if they’re past your last checkpoint. This means you don’t have to worry about dying quite so much, as long as you don’t die ten times before completing the level.

Speaking of the candles — like I said, the game fully embraces its theme. In each level, there are a certain number of candles to find and light before you make it to the exit. You don’t have to find them all to progress, but if you do, you’ll be rewarded with a little extra story text at the end of the level. Because of the controls coupled with the limited wax, I was rarely concerned with lighting all the candles. Sometimes I did and sometimes I didn’t, but I never worried too much about it. I was more interested in enjoying the lovely atmosphere. 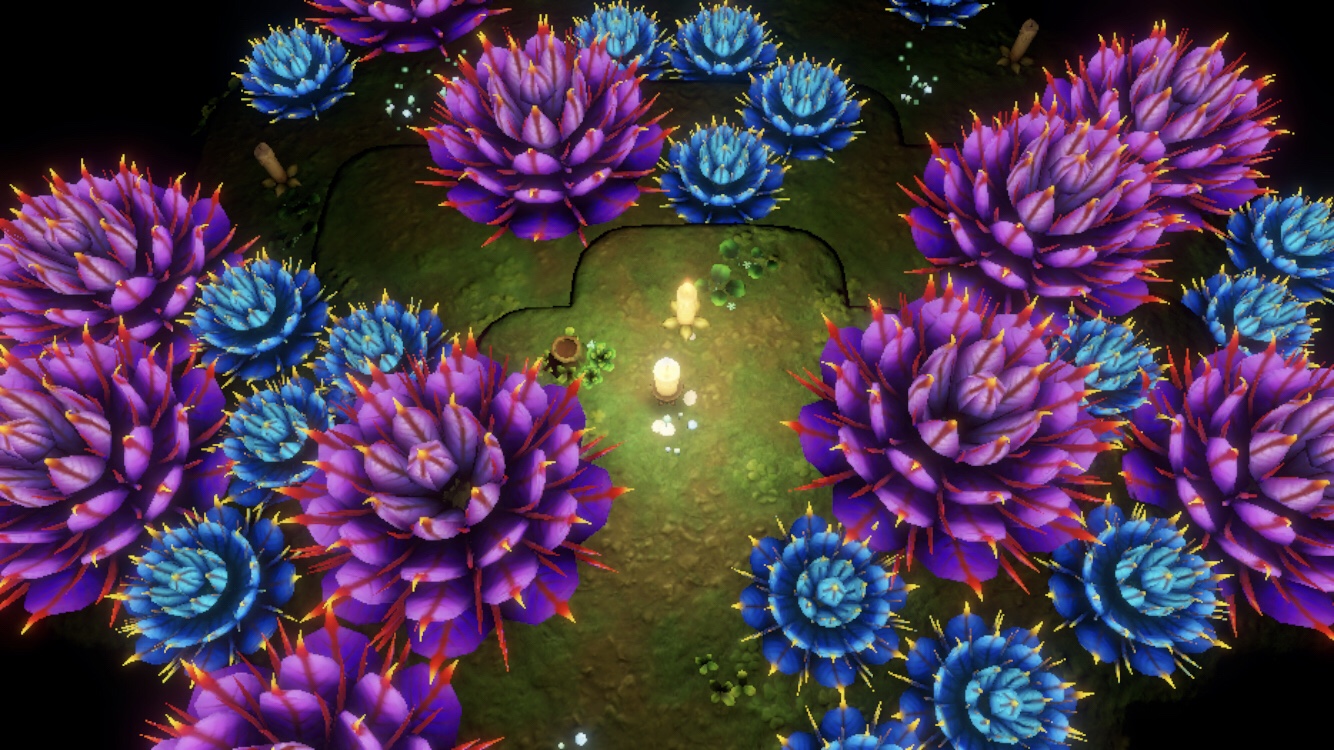 And what atmosphere it is! By far, the gorgeous environments — from glowing scrolls to floating flowers, to the lighting itself — was what attracted me to the game most and kept me playing even when I was frustrated. I also appreciate that the game includes flawless iCloud sync between devices and a photo tool that you can access from the pause menu. If you like the scenery you’re seeing, you can pause and pan around until you get the exact view you want and take a screenshot of it, then save it to your camera roll or share it over social media. It’s nice to see these little extra attention to details, even if the port isn’t perfect in every way. 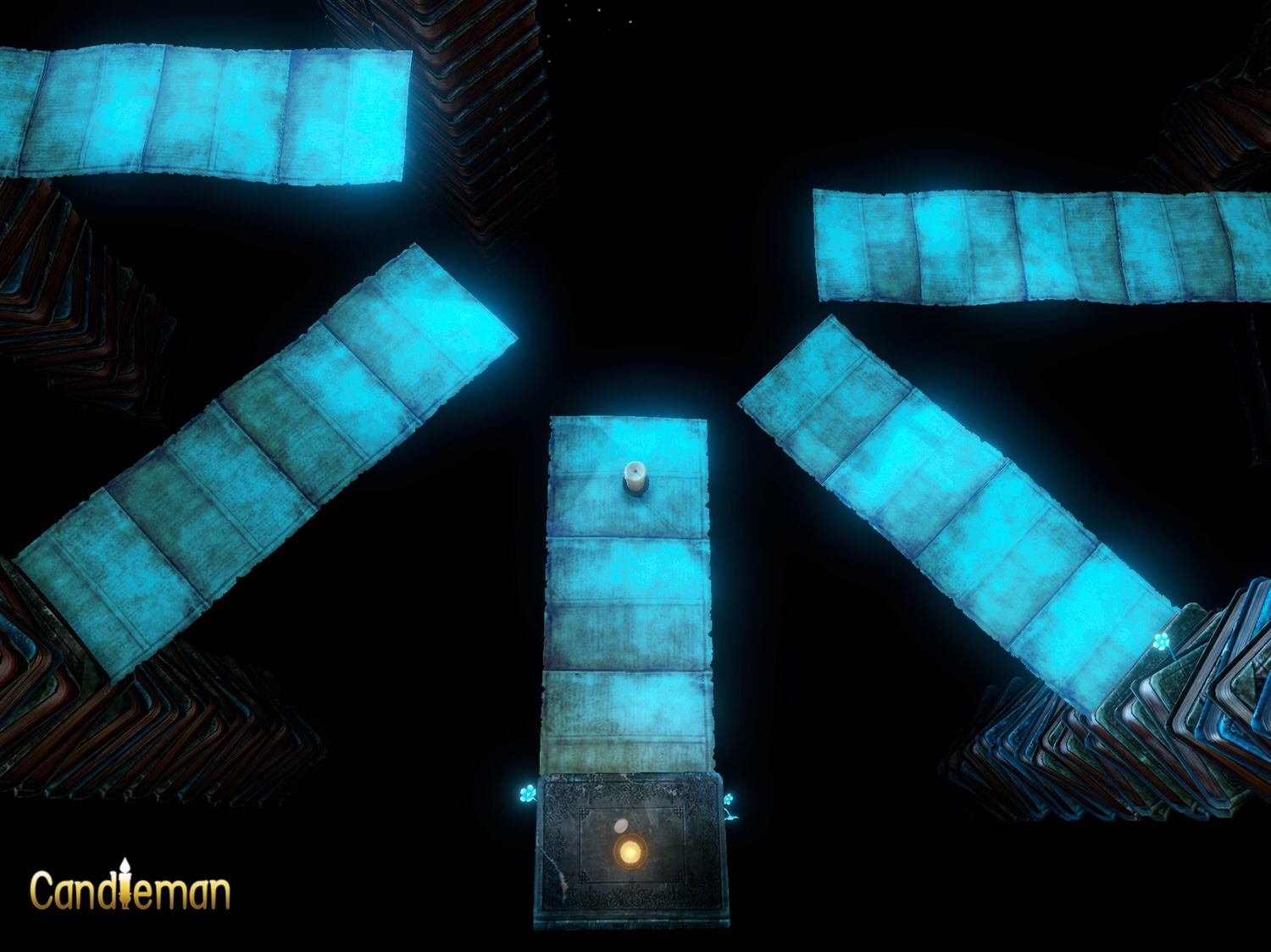 Overall, I’m glad I played the first six chapters of Candleman and I’m looking forward to the rest of the content whenever it comes. I know the developers are taking feedback and trying to improve the game, so I hope by the time we get the new chapters the controls will feel less frustrating and I’ll be more likely to get through the rest of the game. The artwork and atmosphere are enough to recommend the game, but platformer fans are going to enjoy it a lot more than someone who primarily plays relaxed adventure games. There are some puzzles, but they’re rare, with the jumping, tightrope walking and light management taking center stage. If you’re not worried about getting frustrated and giving up before you finish, I recommend picking it up. Even if you do get frustrated, the game gives you ten lives before making you restart a level from scratch. But there are some difficult sections and the controls leave something to be desired. As much as I enjoyed the game — forgive my puns — this light wasn’t as bright as I would have liked. I recommend watching some of the videos I embedded before deciding whether to buy. If you’re ready to take a chance on it, light that spark and download the game here.