The Mooseman
By: Vladimir Beletskiy

At first glance, you might think that Vladimir Beletsky’s Mooseman looks a lot like Simogo’s Year Walk. There’s definitely a lot there to draw comparisons between the two. The moose-headed man, for one. A story covering ancient myths, the snowy landscapes, extra widescreen layout, and even the spirits that look a bit like bowling balls. But while Year Walk is a point-and-click adventure, Mooseman more closely resembles a puzzle platformer without the jumping. Despite appearances, there’s an original game here with its own distinct art style and unique mechanics, and it fits the platform really well.

You play as the Mooseman, who has the ability to see into the spirit world, similar to your skill in the Frostrune. Early on, your only control options are a floating joystick on the lower left side of the screen and a tap anywhere on the right side of the screen that either reveals or hides the spirit world. It starts off easy, showing you that you can use the spirit world to help you get past obstacles in the real word. For instance, a seemingly boring rock may come to life and start following you. Lead it to the right spot and you can climb it and reach a higher platform. Or maybe you need it to hold down a button that opens a pathway for you. As you get deeper into the game, you’ll encounter enemies that chase you, and escaping them will involve some quick thinking and acting, as you switch back and forth between the two worlds. But Mooseman walks slowly, so most of the time you’re solving simple puzzles, not outrunning creatures. 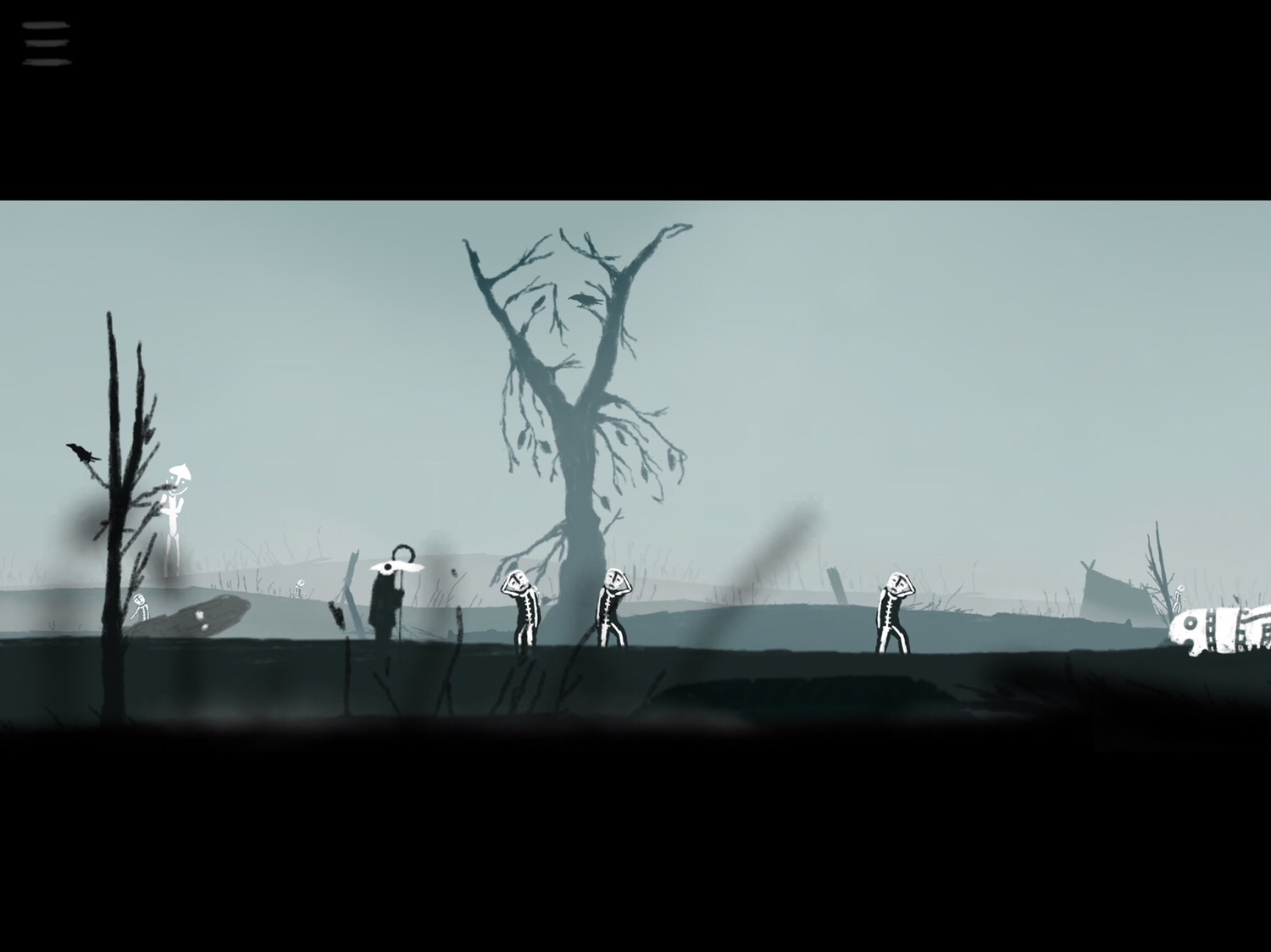 Later on, you’ll earn a second ability, a light at the end of your staff. It protects you against danger, but turns off after every hit you take. So if you’re walking along, minding your own business, and some spirits are flying around in your path, you can light up your staff and walk right into one without taking any damage. But you need to light it up again before another attacks you, or you’re dead. You don’t have hearts or lives in this game, but there are plentiful checkpoints. When you fail, you simply get sent back to the last checkpoint to try again. It’s a very user-friendly setup that only had me close to throwing in the towel once near the end of the game. 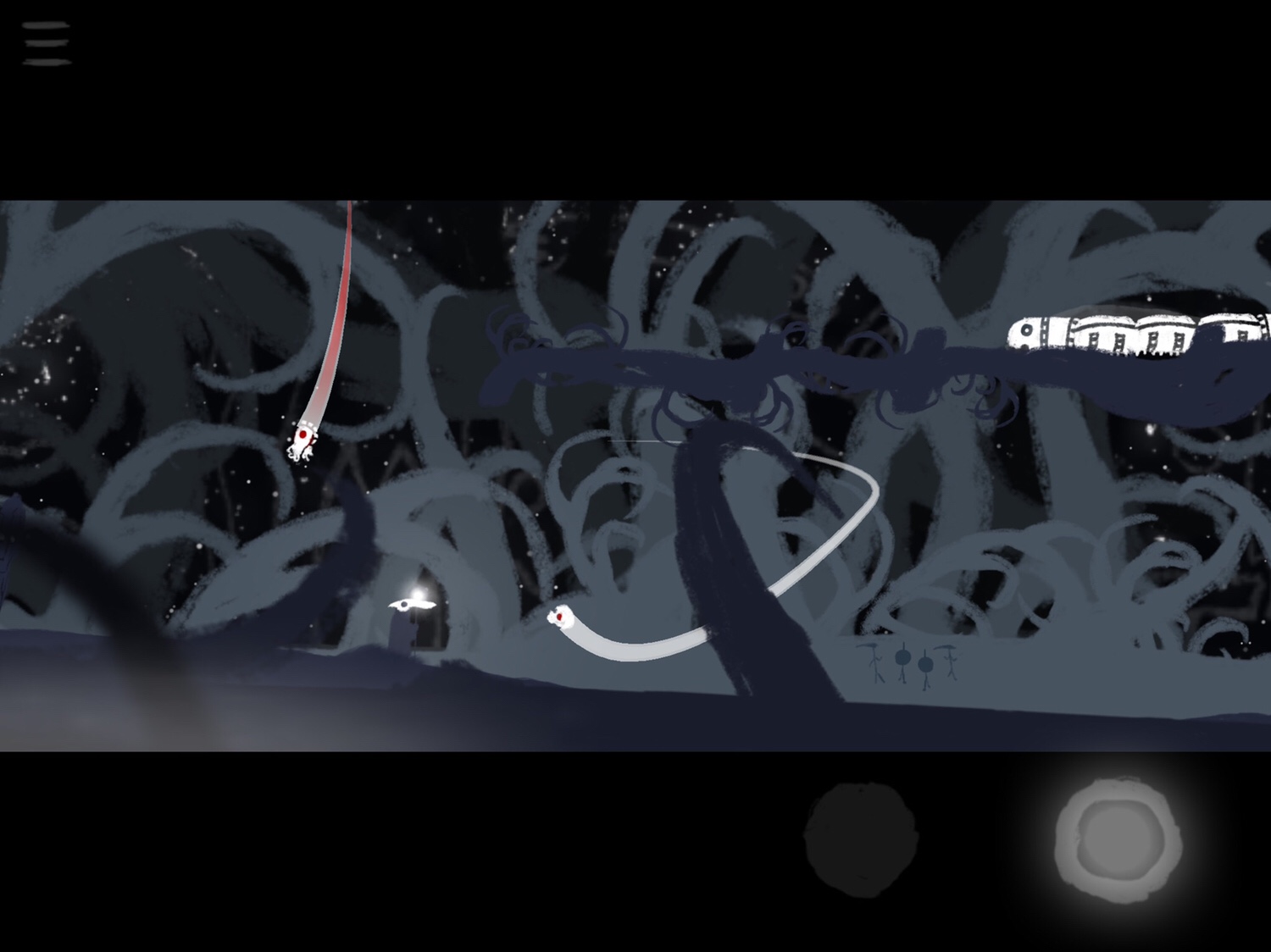 When you’re not worrying about physical danger, you might be solving puzzles. These could involve paying attention to drawings on the wall so you know the order in which to press buttons, or controlling spirits that rotate discs that together make up an image. There are even some bosses that combine puzzle solving with action. At times, I thought of Playdead’s INSIDE, which I think is a good thing. Like INSIDE, there are also collectibles to find throughout the game. Here, they offer little snippets from Perm mythology, so you can learn something while you’re playing. I was surprised to discover that there are a great number of them and that I missed most of them on my first playthrough. The game likes to hide them at the beginning of a stage, where you’d have to go back a bit to see it. So I missed a lot of those if I wasn’t thinking about it. Others require extra work to access, either by passing through extra enemies or solving a bonus puzzle. Thankfully, you don’t have to start the whole game over if you miss some. You can just select a scene you’ve already visited and see if there’s something you missed there. 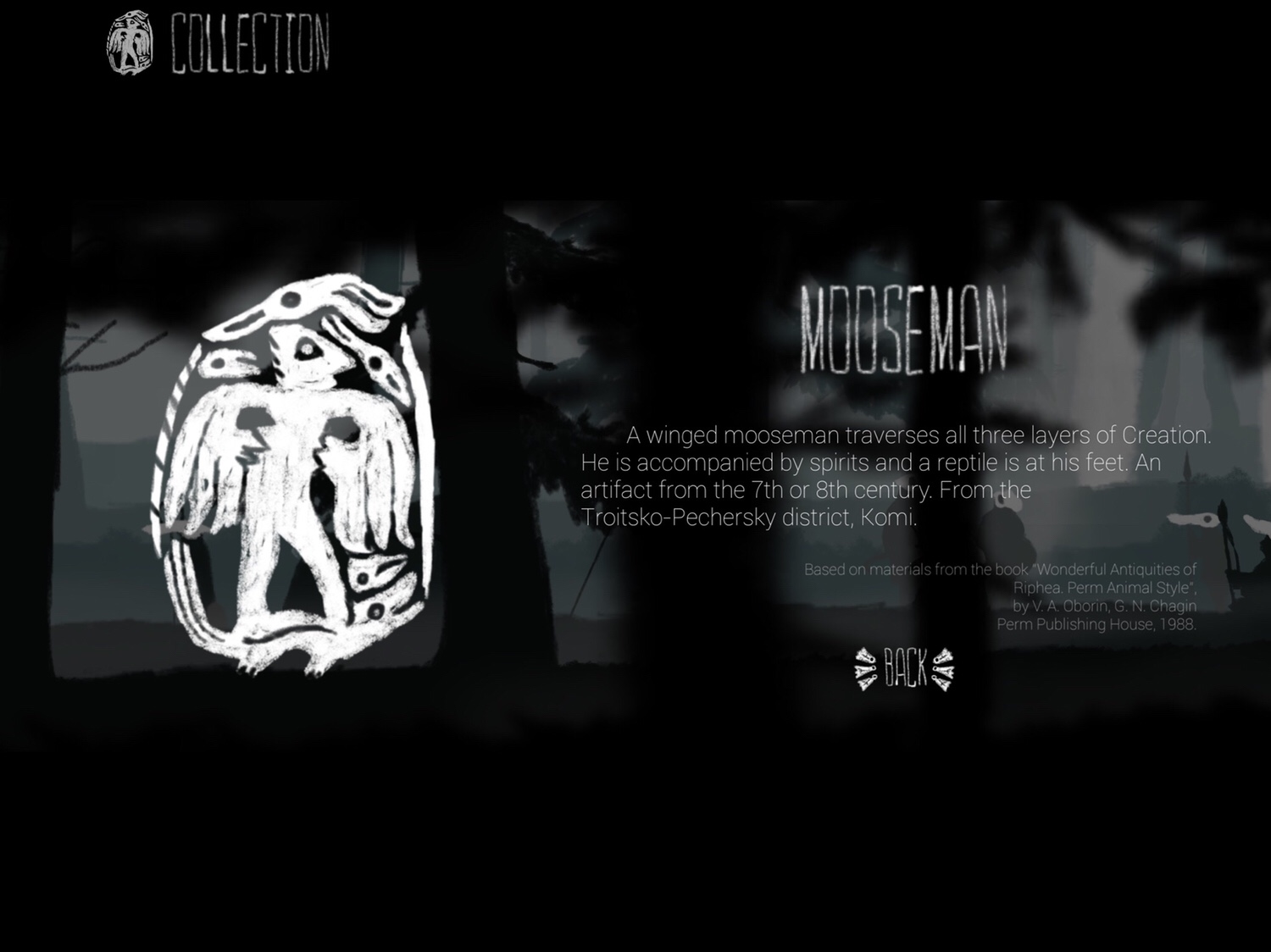 Though the game is short — I completed it in less than two hours — it was constantly surprising me, and I didn’t feel like it overstayed its welcome. It told the story it wanted to with a variety of mechanics and got the job done. Like I mentioned earlier, there was only one section near the end that made me nearly quit. It has you flying to outrun a boss, and I found the controls a bit lacking there. For most of the game, the controls were fine and I could get past even more difficult sections without too much trouble. (I should mention that in my first gameplay video, the joystick acted differently than it does in the release version. So don’t let my complains deter you from trying the game.) But this one part made me think I wouldn’t see the ending. I’m glad I passed it, but I hope the developer can do something about that part so others don’t have the same frustrations. 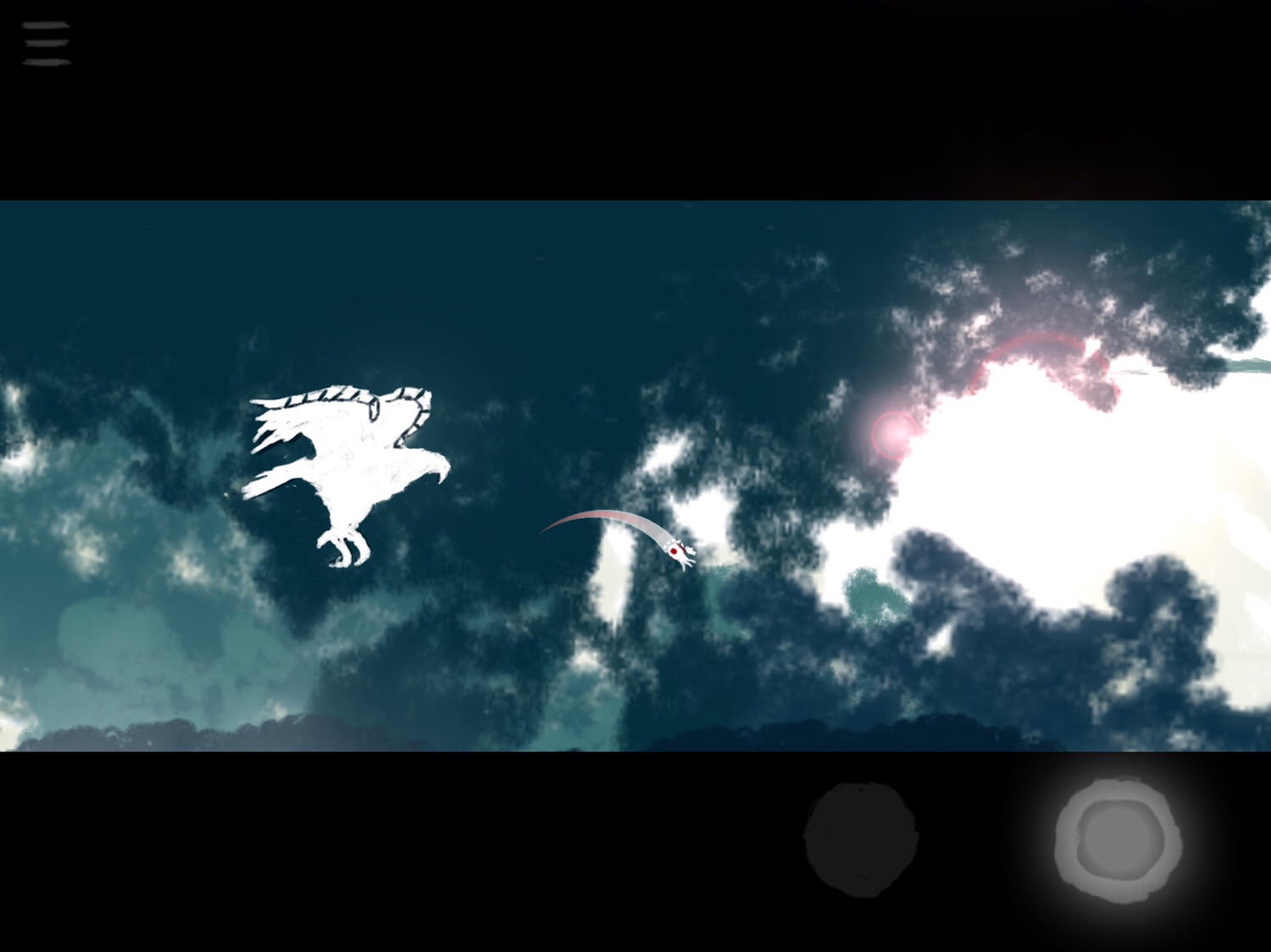 Unfortunately, there’s no iCloud sync, so you do have to choose a device to play on. I used my iPad, as I prefer the bigger screen for atmospheric games like this. I do hope the feature might be added in the future, though. Also, like I mentioned earlier, the game is widescreen, so there are black bars at the top and bottom, even on an iPhone 8. This might be one of those rare games that makes it worth having that wider iPhone X screen. That said, the game still makes use of the extra screen real estate of the iPad. The black space at the bottom houses the controls, though you can still control the joystick from higher up if that’s more comfortable. The menu is at the top, and sometimes you’ll even have environmental elements bleed into the black space, such as snow or the sun. It’s a nice little effect that shows some thought was put into making the iOS version feel like more than just a cheap PC port. Aside from that one section I had trouble with, Mooseman feels great on iOS and I’m so glad it made its way over. 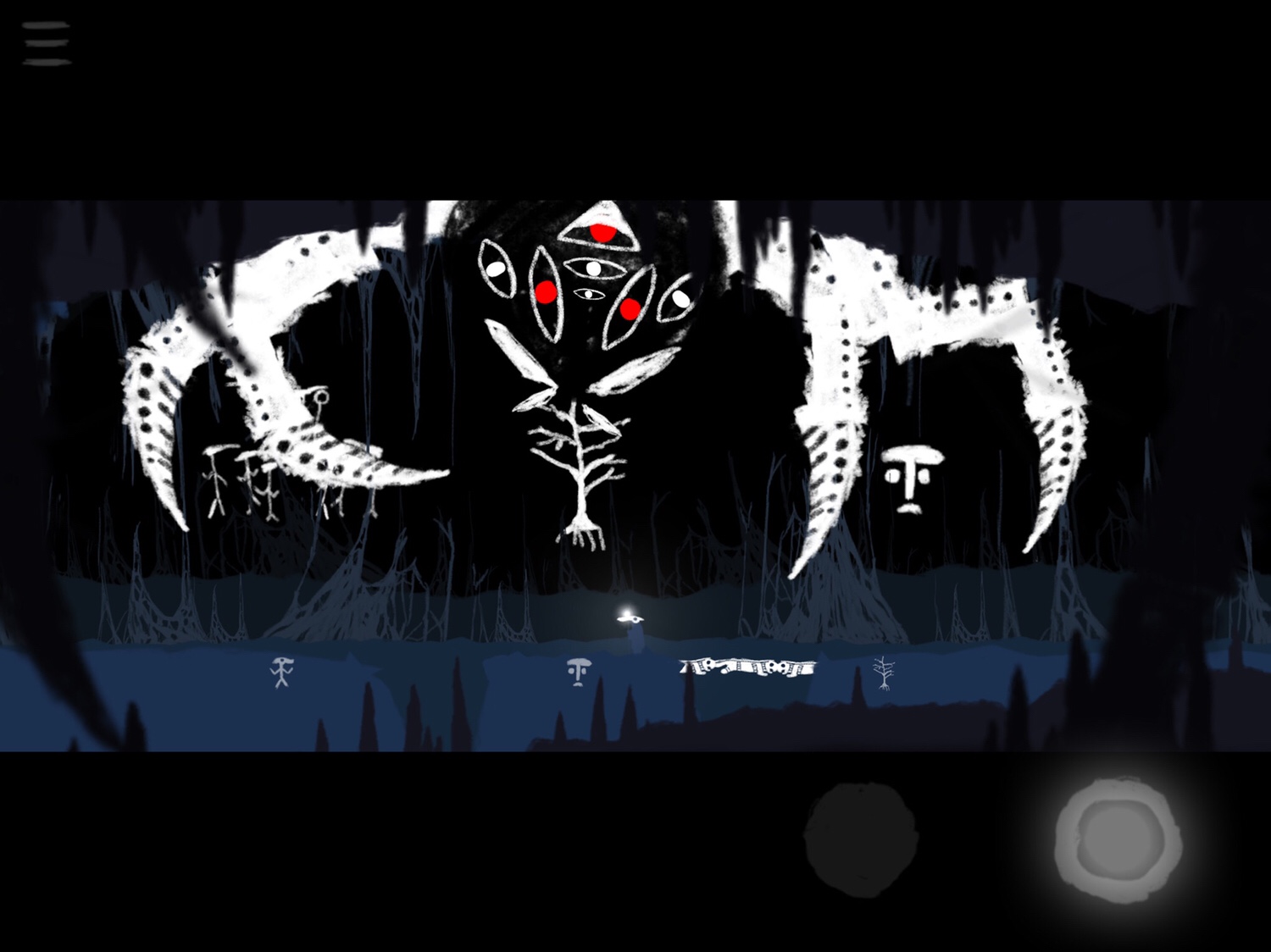 If you’re looking for a unique, not-too-frustrating game that won’t waste your time, The Mooseman is a good choice. Players looking for a big challenge might be disappointed, but I think everyone else should enjoy it. The sketchy art style gives off an eerie vibe, and the fantastic soundtrack immersed me completely in this world. On top of that, it has a very generous payment model. You get about a quarter of the game for free to decide if you like it enough to pay $1.99 to unlock the rest. So there’s really no reason not to give it a try. If you’d like to experience life as the Mooseman, you can download the game here.

And if you need help, I have walkthrough videos here of the entire game.

Stay, Mum Review: Stay Away From This Game