If you’ve been frequenting this site for a while, you probably know by now that I’m usually not a big fan of platformers. Even back when I still played games with a controller, I tossed Mario aside in favor of Zelda. So when it comes to using a touchscreen, it’s very rare that I feel in control enough to master jumping platforms and dodging and killing baddies. Usually, the platformers I stick with to the end are puzzle-heavy and light on the jumping. So when I decided to give Mobge’s Oddmar a chance, I very well knew I would be out of my comfort zone. But the art and animations were just too good to pass up.

The story follows a Viking named Oddmar and is told through hand-drawn animated cutscenes that are fully voice acted by a single narrator, giving it the feeling of an audiobook as one man does different voices for each character. We’re introduced to Oddmar through these cutscenes and learn that he’s normally not very good at being a Viking. That is, until a fairy visits him in a dream to ask for his help and gives him a magic mushroom that endows him with acrobatic abilities like no other Viking has seen before. It means he’s able to jump high and off walls, as mushrooms sprout beneath his feet and push him upwards. Basically, he gets high on shrooms!

Like most games, it starts off fairly simple. You have some easy platforms to jump, some basic enemies that aren’t too intrusive, maybe a fireball or two to evade, and plentiful checkpoints in case you die. But as you progress through the game’s twenty-four levels, things get harder and harder. You have to learn to ricochet off walls with finesse, slam down while in the air to bounce off trampolines, roll on giant wheels while battling hornets, and face off against four very different bosses. You’ll occasionally have an animal friend to ride, which shakes things up a bit, as one can smash through things while the other can triple-jump, to the point that you’re almost flying. 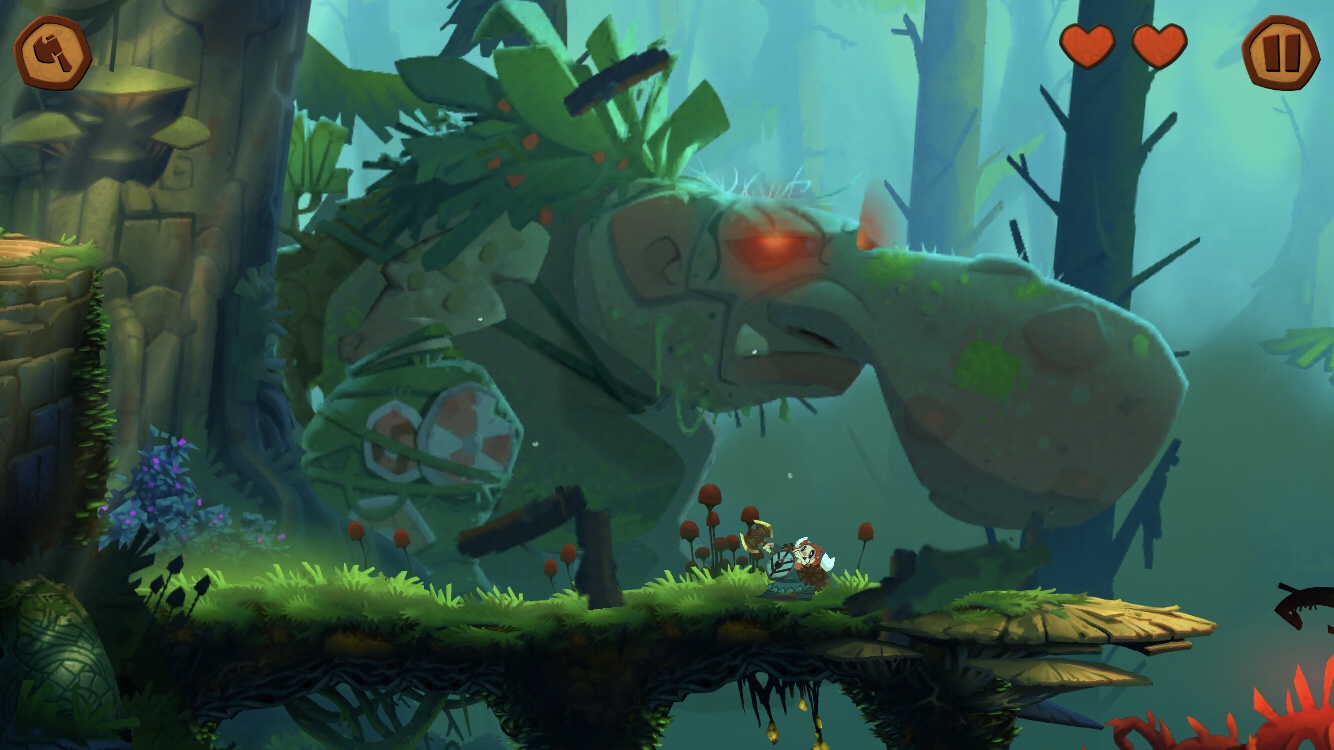 Nothing is ever easy, though, or at least it wasn’t for me. The game compensates for your newfound abilities by providing challenges to match them. So while your boar friend may make you feel powerful when you can just smash through enemies, your tune will change when you’re being chased by a hostile machine that’s always right on your tail. Or those triple-jumps won’t make you feel so invincible when your only landing pads are flowers that crumble under your weight. Even when it’s just you and your weapons, you’re never overpowered. You may be excited to buy an axe that automatically harms enemies nearby, just to learn that you now have to deal with nasty archers and other baddies that shoot from afar. The checkpoints also become a little less generous when the game expects you to prove your skills. But the sheer variety between each level will make you want to put your best into it so you can see what’s coming next.

The default controls are intuitive and feel great, for the most part. The left side of the screen is an invisible joystick that you swipe to move left or right. A swipe up on the right will send Oddmar jumping. A swipe down while he’s in the air will make him perform a shield slam. And finally, right taps control his attacks. The checkpoints, thankfully, leave room for some margin of error, though by the time you get to the second boss you’ll want to have a good handle on the controls. Early on, I had no problem playing on my iPad, but later I found it hard to make precise, quick turns and jumps on the bigger screen. I switched to my iPhone, since the game has flawless iCloud sync, and it felt much better on there. If you don’t like the swipe controls, you can change them to on-screen buttons, but I never even tried them as I find buttons too distracting. I much prefer to focus on the action and not worry whether I placed my finger on the right spot. I think the default controls are better than anyone can really expect from a touchscreen platformer. 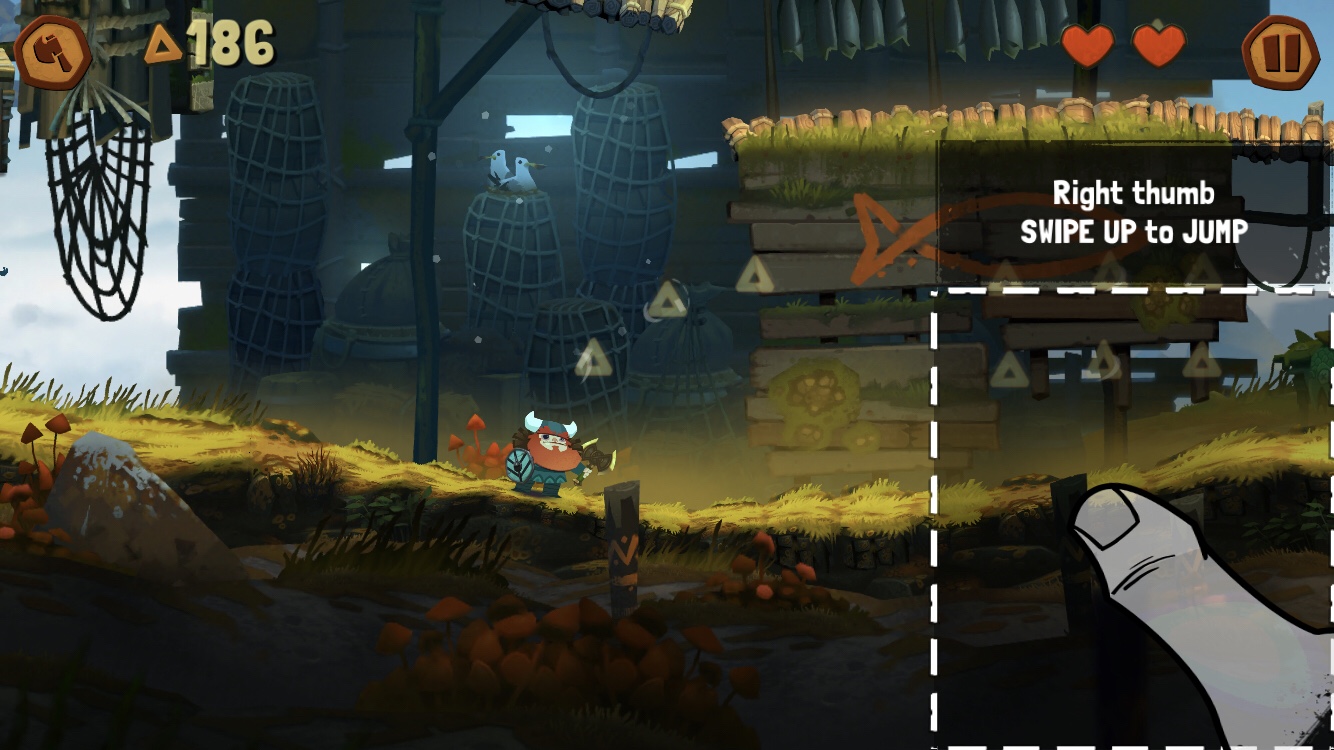 In each level, you need to make your way to an engraved stone slab, picking up triangular coins along the way. Defeating enemies will give you more coins, and there’s a limited number throughout each level. If you pick up the minimum requirement, you’ll receive acknowledgement for it, and achievements for doing so in all levels. But these coins aren’t just there for an extra challenge. You can actually spend them to buy new weapons and shields. There are also three hidden secrets to find in each level, that are completely optional. And last, each level either has a time trial or a dream world to complete. If you replay a level, any previous coins or secrets you found don’t need to be picked up again, but any new ones are added to your total. For the time trials, you can even ignore all the coins and secrets and just focus on getting to the exit quickly. This all gives players new ways to approach a level, especially for those who find it too easy to just complete the game. 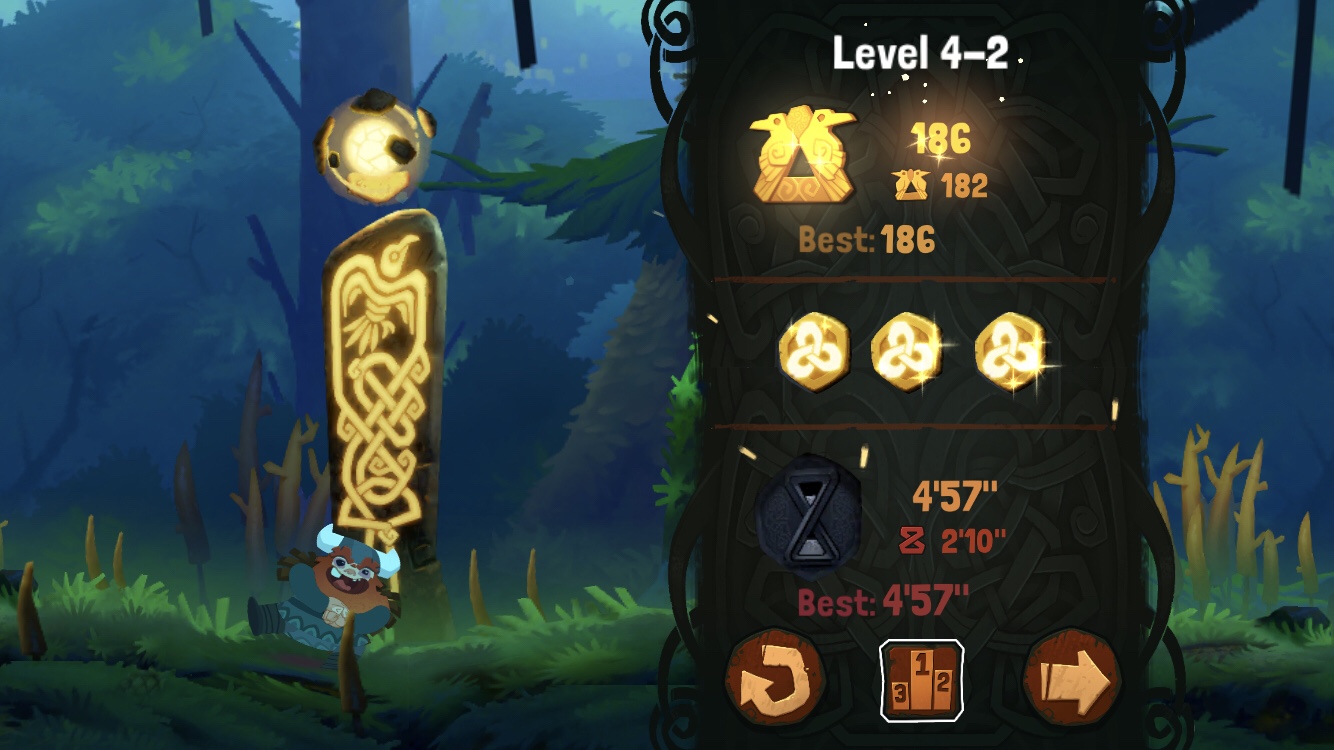 Despite Oddmar’s somewhat casual-friendly approach, I had trouble with much of the game, and nearly threw in the towel a few times. With some persistence and very shaky, sweaty hands, I managed to get as far as the final boss before quitting. It helped that the game saves at every checkpoint, so I didn’t have to worry about taking a break when I was getting frustrated. Often, all I needed was to approach the section fresh, instead of after an already long session of playing. One of my usual complaints with platformers is that they expect one to perform perfectly over a long period of time, without taking into consideration that some players just don’t have that kind of endurance. Oddmar, while mostly generous, is guilty of this with some boss battles, and I was worried I wouldn’t make it past some of them. In the end, though, I only gave up on the final boss and, while it would have been nice to complete the whole game, I’m feeling pretty good about it as a whole. The final boss is hard for me and it’s ok if I never beat it. I still had a great time with this drop-dead gorgeous game and I’m glad I didn’t let my fear of platformers keep me from giving it a chance. Each time I got through a difficult section, it felt incredibly satisfying, even while reaffirming my fear of platformers.

That said, I wouldn’t have minded checkpoints during the last two bosses, with perhaps achievements for those who beat them without any deaths. I also would have liked a way to play the dream sequences separately from the rest of the game. You can only access them within other levels, and you can keep retrying when you fail, but if you want to give them another try later, your only option is to replay the entire level. Some of these were so hard for me, especially those that required perfection. For instance, there’s one where you ride on the back of a weird flying horsefish, and you have to jump over obstacles and land back on him. I would always do ok at the beginning, but starting over from scratch every time I messed up became too much for me. I would still like to be able to try those sections on their own, as the way they’re set up right now I’m unlikely to ever revisit them. Still, I’m glad the game doesn’t lock any content behind them, because then I definitely would not have gotten as far as I did. 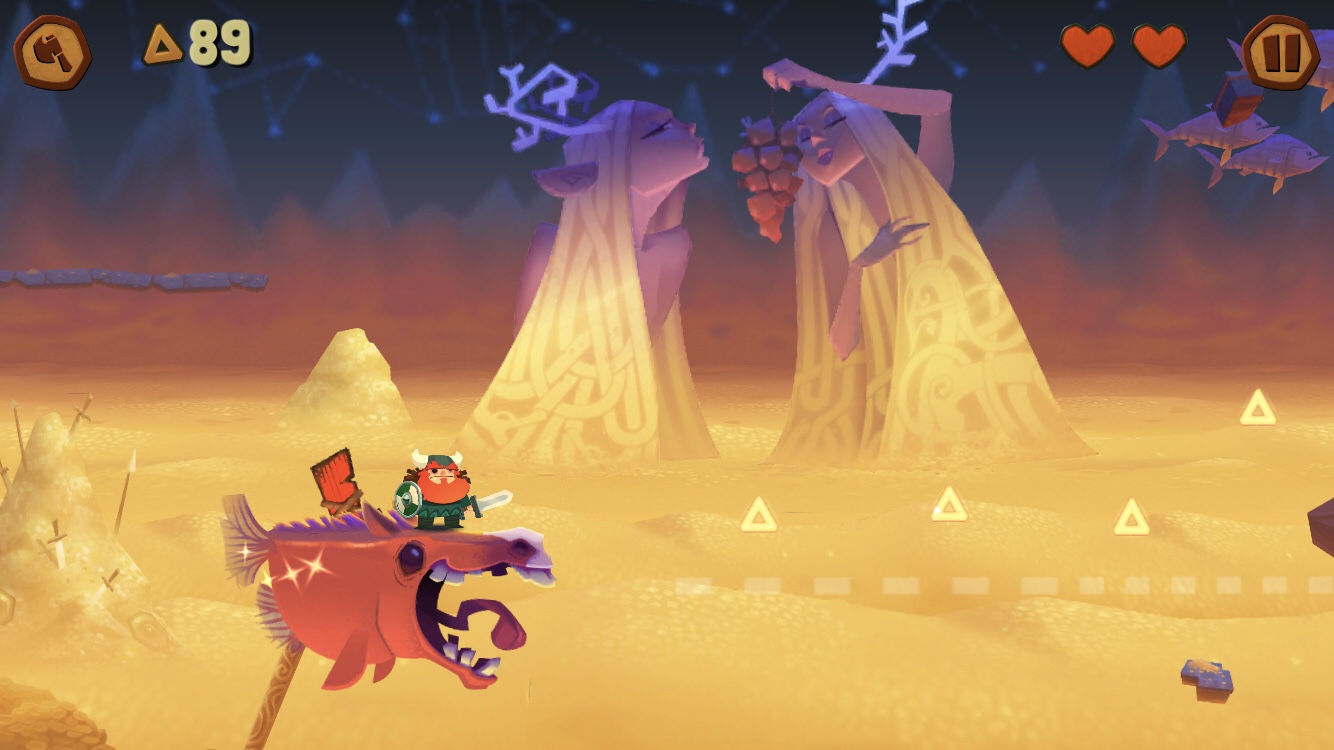 The bottom line is, this is a must-have for platformer fans, but even those who don’t usually enjoy the genre may want to take a look. The game is just bursting with character, from Oddmar’s idle animations to all the little critters such as sheep, dragonflies and seagulls throughout the forest. It’s like playing inside an animated movie. The game is so polished you could see your reflection off of it. While more complicated and less forgiving than something like OVIVO or Mooseman, the quality is just oozing from every crevice, making it a must-play for anyone who’s up to the challenge. If you’re ready to get high on shrooms, download Oddmar here.

Baba is You: Volcanic Cavern Walkthrough Guide and Solutions